September 19, 2013, I was at the North Dakota farm of my Uncle Vincent and my ancestors. It was a place I had been many times before, and this particular day I took the below photos, and 29 more.

I had ridden out to the farm with Uncle Vince, then 88 years of age. We did this every time I came west during the years they’d lived in town, ten miles away. 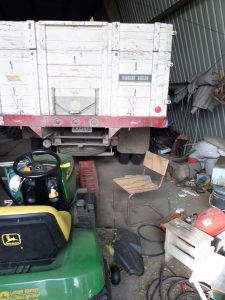 I’m not sure why I made this particular trip. My photo logs around that date show no related trips connected with the specific visit to that home place 320 miles from where I live.

My photos that day were the usual ones of the ever more run-down farm. This day I took this specific photo of the metal shed, showing where Uncle Vince, in recent years, spent most of his time when he visited his life long home. I purposely showed the place exactly as it appeared. There was no staging. At the time of the photo, Uncle Vincent was down by the barn, turning off the water to the garden; preparing for winter, as he always did.

What I do remember about that day, and those snapshots, was that I felt I was documenting the coming end of the then-108 years old Busch farm.

Since 2006 Vincent and his sister, Edithe, lived in town in assisted living; Edithe had, about a year earlier, moved into the Nursing Home down the hall.

As had become normal, Vincent continued to come out to the farm to do something: on this day, turn off the water to the garden.

But something else was becoming more obvious. Once again, he had forgotten why he made the trip to the farm, and I had to remind him more than once about what he had come to do.

He was slipping. He was also more and more depressed. He’d just sit in that old chair at the farm and look towards the nearby house and yard he’d lived almost his entire life, and look beyond in the direction of the old hometown, Berlin ND, elevators easily visible, about five miles from the knoll on which the farm stood. He’d just sit there in his chair and look…. 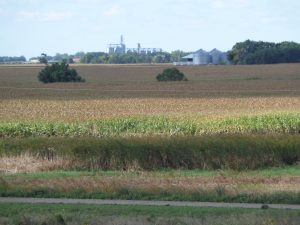 I remember one other particular photo that September day. It is below. 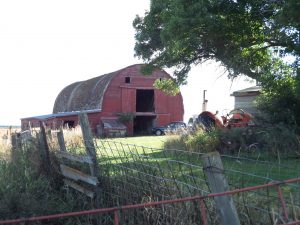 I was down by the old garden, and took a photo of the old barn – I’d done that many times before. This particular day, as I noticed the car by the barn. I realized with a start that given Vince’s short term memory problems, it was a real possibility that he might drive home to LaMoure without me, not remembering that I’d come out with him. So I hustled back towards the barn.

Visit over, I made the over 300 mile trip back home.

My photos show that on October 24 I was back in LaMoure, then again on November 10, to do the deed that many of us have to do with an elder loved one. 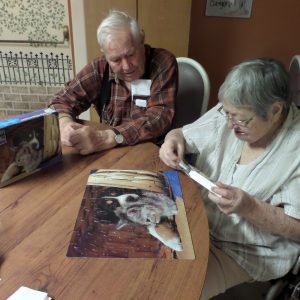 The folks in assisted living had determined that Vincent could no longer live semi-independently in his apartment, and on November 11, 2013, I had to give him the talk, along with the Director, that he had no real choice but to move to join his sister down the hall in the Nursing Home. I accompanied him on that short trip by wheelchair. It was not easy.

These are things that stick in one’s mind: those Fall days in North Dakota will be among my enduring memories.

There was always a melancholy sense with Vince; that he felt he’d failed, somehow, let the family down. It’s easy to fall into that trap.

I know better. He honored his family and his community as well. He was a good man.

We’re all on the same train track called “life”, with all that entails.

Three days ago, I went to the funeral of David, a teaching colleague from 50 years ago. Funerals become regular social event for older folks like me. I sent along to the mailing list announcing David’s death an old Ann Landers column that has always been meaningful to me, and offer it to you, now: The Station001

All best for a good life.

NOTE: Here are the blogposts written about the Busch farm and North Dakota generally over the last few years: Dick Bernard Blog Posts on Buschs and N. Dakota

Neither Vince nor Edithe ever married, nor had kids of their own, but there were those 28 of us who called them “Uncle” or “Aunt”, and saw them from time to time. Six of us preceded them in death.

Sometimes you wonder, did you make any difference at all? I’m pretty sure Vince, in particular, wondered about that, though he was close-mouthed about his feelings.

Lately, I’ve had a couple of pieces of “evidence”, among many others, that yes, they/we made a difference.

Earlier this month, daughter Joni, was appointed Principal of a Middle School near here. She’s been a school administrator for 13 years, and the new assignment is a particular challenge/honor: she takes the reins at a 66 year old school, while at the same time supervising the construction of its replacement school a few miles away. She’s earned the promotion to what is a difficult job. Here’s the article announcing her appointment: Joni Hagebock001

Just a week or so ago we got the latest issue of the Catholic Archdiocese newspaper, and the entire back page was devoted to Carrie Berran, who we immediately identified as the daughter of another of Vince’s nieces, Mary Jewett. As the article states, Carrie was honored as the national NBA Jr. Coach of the Year for the United States. Not at all shabby! Carrie Berran Jul 2017003. 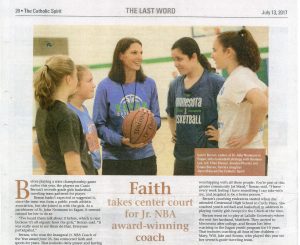