We head to “the lake” today for our annual week at Breezy Point north of Brainerd MN. We have the same week each year. My computer takes a vacation, too. Likely, tonight, the local Elvis impersonator (he’s very good) will do his gig by the dock, and we’ll have an enjoyable time.

Ten years ago, August 1, we were at the same resort, watching the news, and up came an announcement of the I-35W Bridge collapse in Minneapolis. We first had to figure out what bridge it was – it’s not a normal route. In my computer photo file – the index says “Apple iPhone 6:38:13 pm” – someone, apparently at the Guthrie theater not far away, had taken a photo of whatever was happening just down the street, later sending it to me. I have a guess. See text below. In due time, the scope of the tragedy became known: 13 dead, 145 injured. The bridge took years to rebuild; there were lawsuits and financial settlements, and talk about our crumbling national infrastructure.

Thursday of this week I crossed the replacement bridge twice, to and from a 5 p.m. meeting at St. Anthony Main. The significance of ten years ago at this very spot didn’t even cross my mind. Life goes on, memories are short. So long as we avoid the personal potholes of life, we can, in our affluent society, largely ignore our responsibility for the greater reality around us. My opinion: our neglect of our infrastructure (which in my definition includes our inability to even work out differences of opinion amongst ourselves) is our slow-moving and continuing 9-11-01 – a disaster in progress. 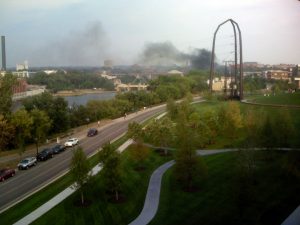 Photo of I-35E Bridge Collapse August 1, 2007 via iPhone, quite likely from the Guthrie Theater.

Back on August 1, 2007, I had an e-mail list – no blog – and there were a flurry of comments, from which I reprint two, below. A month later, when the area was reopened for people like myself who wanted to see the scene, I went down and took a few photos, three of which follow.

Here’s from Jody, August 1, 2007, 11:57 p.m.: Tonight, I took my kids to Minneapolis to see the musical 1776 at the new Guthrie Theater. I called it an early birthday present to myself, and their gift to me was to go happily from start to finish.

I decided not to take I-35W. It seemed, I don’t know, like the wrong road to take, though it would be my normal way into town. We took an alternate route and got off the highway at about 6:08. There had not been too much traffic and we were very early for the show. The road we were on, Chicago Avenue, went right downtown and suddenly, as best as I can describe — it was chaos. The fire truck that came by first just about pushed the SUV out of his way to get by. Emergency vehicles were coming at us from three directions. I hardly knew where to be — on the right, off the road, stopped — it was just bedlam. I finally got into the parking ramp where it felt safe. My adrenaline was rushing; it was pretty clear something was wrong. Some emergency vehicles had boats.

The Guthrie overlooks the Mississippi River. We joined an ever-growing crowd at the window. The theater has a long beautiful seating area, comfortable chairs, great view — and there we could see the bridge in the river. We could see the smoke from the burning tractor trailer. Emergency vehicles. People. And there was shock. Horror. Cell phones not working. Huge number of bystanders crowded the banks of the river from all angles to watch.

7:30 show time. The seats were not filled. We waited. The show started late which isn’t typical, I hear. We had front row seats, but the mood was subdued. We made an effort to become involved with the production, which was truly wonderful. Part of me felt guilty that I was sitting there. Why hadn’t we gone down to help — although I’m sure our help wasn’t what they needed.

I am only home twenty minutes and trying to catch up with what happened from the television vantage point.

We talked on the way home about the fact that while if I had taken 35W, we would have gotten off the exit before the bridge — but the family joke is that when I have both kids in the car I get to talking and miss my exit (one famous trip to the airport turned into a long trip).

We’ve had calls and emails from friends all over the place, so I thought I’d write. And now eat some ice cream. 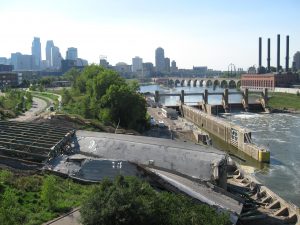 (click to enlarge this photo, and you will see a black building closeby to downtown Minneapolis. That is the Guthrie Theater, and the vantage point from there would be very similar to the photo you see at the beginning of the post.)

After work, most routes were congested and she tried 35 going north and found it stop and go, She was not able to get off because drivers would not yield to her signal. Fortunately, She had driven (inched) to nearly the north side and her maroon older sedan dropped 60 feet with the failing bridge, landed hovering on the frontage road. She walked out of the scene with a truck driver to the Lutheran Center and was taken to U hospital and treated for spine injury. She chose to go home and is recuperating in Arden Hills.

She is grateful she did not drop into the water and she notes her car has had national press coverage. I saw it in the NYTimes slide series. Sadly, her perception was that the car next to her did not make it. She welcomes prayers during this tragic time.

I drove to work under the bridge for 3 years choosing slow life. Last week I walked to my work at Ted Mann Hall a few blocks from there. To avoid the pollution of slow moving freeways, I use alternative routes often.

I welcome the wake-up call to invest in our infrastructure, protect our people and reevaluate transportation-work viability.

(The photo below is of the north side of the bridge, roughly where Lois would have been. The photo above shows a road going under the collapsed bridge which would have been Mary’s usual route.) 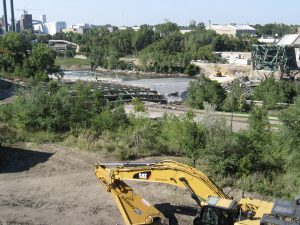 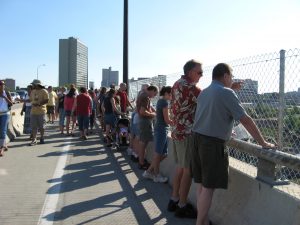 Looking at the destroyed bridge, Sep. 2, 1007, from the parallel bridge just downstream.

POSTSCRIPT. There is a continuing tsunami of national news swirling around the current administration and Congress. A good summary of the last few days is here. I agree with the George Will “snip” which is included in this summary: “Trump is something the nation did not know it needed: a feeble president whose manner can cure the nation’s excessive fixation with the presidency.” Every one of us has shirked our duties for far too long, expecting – and blaming – the President, whoever that might happen to be, for every thing, real or imagined. Ideologically I’m not a George Will type, though his opinion is well worth a read.