This post is about voting rights: the frontal assault on these rights in many of the 50 states – a commonly used number is 250 proposals to amend rights to vote in assorted ways, by the Republican Party.  In the other corner is HR 1, a Congressional initiative by the Democrats to at minimum secure existing voting rights to all eligible, and hopefully an expansion of those rights under the U.S. Constitution.  The battle is visible; the outcome is uncertain.  Citizens will make the difference in this issue.  Some background, and a recommendation follow.

Repression isn’t new in the U.S.

Friday night I was watching Chris Hayes on MSNBC, and saw this segment, which I found very interesting.  It is about Nathan Bedford Forrest.  I hope you can watch it,  here is the link, about 7 minutes.

If you can’t access the link, Forrest was the First Grand Wizard of the Ku Klux Klan, and a bust of him has been in the Tennessee State Capitol since the 1930s.  A State Commission ruled that the bust needed to go, and some state legislators want to abolish the commission (which they created).  I suppose this goes along with the current ‘cancel culture’ narrative now in vogue.  Leading the charge to move the statue is a Memphis state legislator – a young African-American woman.

The piece caused me to think about an old book I found on the family farm in North Dakota after my Uncle died.  It’s title “The Clansman” intrigued me at the time.  It was by Thomas Dixon and it included photos of the then-upcoming racist film, “The Birth of a Nation” (1915).  So it must have been a reprint of the 1905 book.

I’ve read the book, actually had it restored and have written about it at this blog earlier in 2020.  What I said then, remains my opinion.  Here is the 2-page forward in the book: “To the Reader”: Clansman, Forward 1904.

This brings me to the word “offense”, which titles this piece.  My old unabridged comes in handy at times like this: 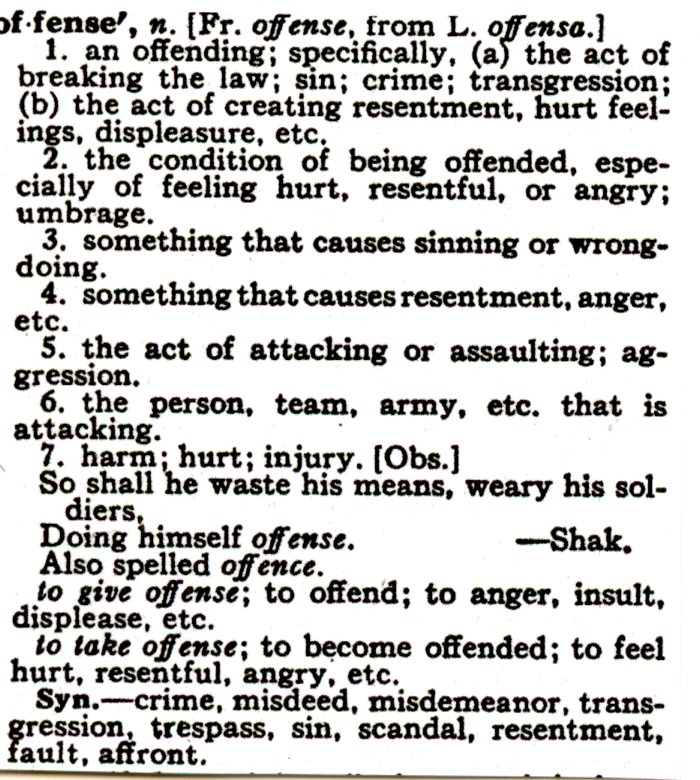 It is clear, on many fronts, in many states, that there is an orchestrated attack which are attempting  to bring back the old, whatever that was.  January 6 was a primary example; hundreds of attempts to restrict access to voting in many states are others.  And on and on.  You can find in the definitions above descriptive words for all of these efforts.

The Republicans have gone on the offense to make voting more difficult for certain voters.

I happen to be on the other side in this current war; and it is my opinion that I am on by far the strongest side.  Evidence is strong, starting with 81,000,000 votes in November; and an approval rating for the now-gone past-president which never reached 50%, regardless of what was counted in the survey.  Further, the base of the angry army probably never exceeded one-fourth of the electorate.

Years ago, in 1974, I found myself in an organization which was under attack by a competing organization which was considerably smaller, but very aggressive.  We were considered vulnerable, and we felt vulnerable.  I can remember the day the tables turned, and it was based on a decision we made: we had been put on the defensive, and we decided to go on offense.  The election came and we prevailed with about 60% of the vote.  Apparently, we had made our case.

There are many ways to go on offense.  Take your pick.  And act.

Things are different now than they were in 1865 and the years that followed.  The KKK and others killed emancipation of black men.  Later came the monuments to the confederacy.  1915 was the year the film, Birth of a Nation was released (and the Clansman novel reprinted).  There was a new President, a Democrat, Woodrow Wilson, who was also a racist.  A World War was raging, and America was going to be pulled into it, which exacerbated tensions.  The U.S. essentially occupied Haiti from 1915-34...it’s treatment of Haiti essentially continuation of the slave tradition of France and the United States.

There were other things that happened then.  Women got the right to vote in 1920.

Fast forward, and finally civil and human rights began to have their day in our own country.  It was a difficult struggle.  As Martin Luther King declared shortly before he died: “We shall overcome because the arc of the moral universe is long but it bends toward justice.”

Change takes effort.  It is not free.  The bitter past will not come back unless we allow its return.  And the avatars of permanent change will be young people, women, persons of color, all assisted by tens of millions of us who are suspect by virtue of our age, gender and skin color.

It will take work, but like the African-American woman legislator in Memphis yesterday, we can make change happen by shining a light on the injustice that still exists.

Be part of the change you wish to see.

Go on the offense.

POSTNOTE March 22: The bulk of this post was written before March 21.  Sunday evening, March 22, we watched the last of a six-part mini-series on Abraham Lincoln on CNN.  The last segment began with the assassination of President Lincoln, and the ensuing disintegration of family and dream of emancipation in the United States.  It was essentially along the lines of the earlier text above.  What would Lincoln have thought?  Would there have been different outcomes had he lived?

Personally, I think Martin Luther King got it right – “the arc of the moral universe”.  MLK was rooted in reality. He had a dream, but he knew it would not be easy, indeed it would be dangerous, and he paid with his life.

My Dad loved sayings.  One of them that comes to mind, that he administered on me more than once, is this: “Quitters never win; winners never quit.”  Vince Lombardi apparently coined the phrase.  Good enough for me.

POSTNOTE March 26: The following two items languished in the ‘draft’ file, but are too worthwhile to delete.

“Lobbying”: Some days ago a friend who is active in Politics sent me this podcast, which I think is accessible by anyone.  I would recommend listening to the program, which is one hour.

My friend says this: “Steven Pearlstein Discusses the Left’s ‘Progressive Paradise’ and the Partisanship of Covid Relief. The similarities to our state legislature (MN) are remarkable. If you get a chance to listen, let me know what you think. And I wonder if you recognize the change that Pearlstein describes.”

My friend, Jane Peck, posted a comment at my International Women’s Day post, as follows ” I’d like to invite everyone to watch the 25 minute video made of our show, “Votes for Women! Rally 1920“. It focuses on 5 Minnesota suffragists. We four actors had paid engagements to tour this show around MN this year, but Covid interfered.  I wrote and directed it through History Alive Lanesboro. You can find a link to watch it on our website https://historyalivelanesboro.org  . We’d really like to share it with you all!”

Jane’s profession has been historical reenactment, especially dance, for many years.  As for many others in the performance business, Covid-19, has severely interfered with Jane’s work.  Do take the time to accept her gift.

Women finally got the right to vote in 1920, which today seems astonishing.  Slaves had been emancipated over 50 years earlier, and theoretically freed male slaves did have the franchise, though we know what happened during reconstruction and in the first half of the 20th century.

It is a statement of the obvious that women are every bit as diverse in opinions, etc., as are men.  All the rest is argument.  The group I am watching most closely are younger women of color who are making a big difference and taking a back seat to no one.  Life isn’t perfect – it will never be.  But I’m pretty certain we’ll not be making a trip back to 1860, or 1915, or pre-1950s.  Each era has brought change, sometimes small, sometimes large.  But there’s no going back, and I’m glad of that. 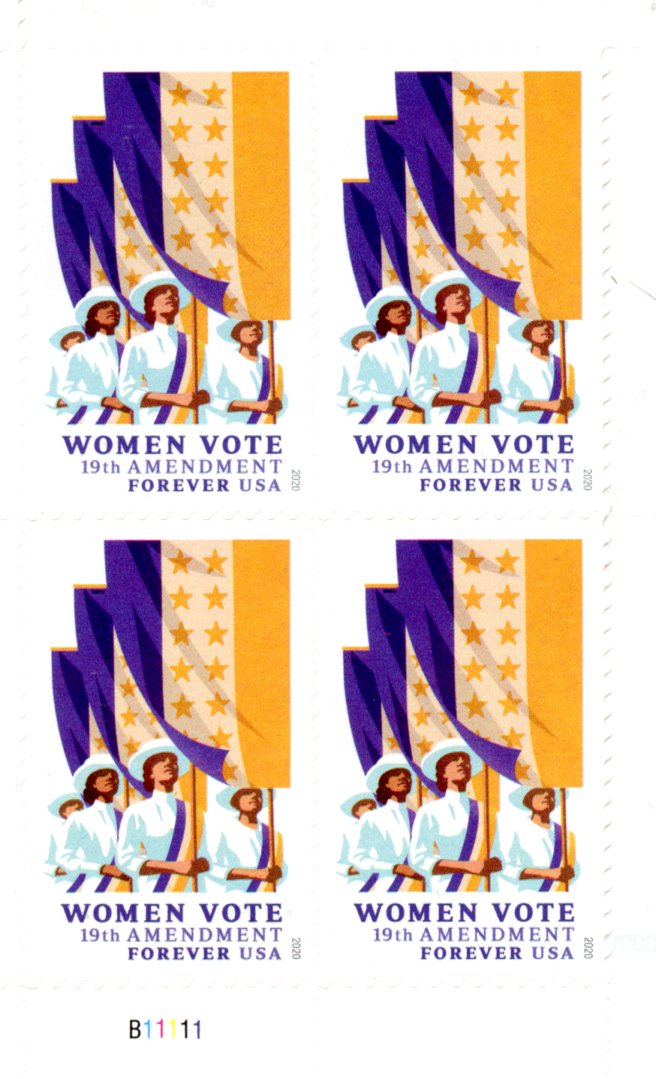