Saturday, friend David Thofern sent a brief note: “Here’s a link to a short (<20 min.) film on the human cost of World War II. It’s appropriate on Memorial Day to note that individual deaths often have profound impacts on us, especially when they are people we know and care about. But when deaths are counted in the millions we can’t get our heads around the concept.  This film by Neil Halloran tries to make sense of the numbers.”

This film is about 18 minutes.  I have watched it.  It is very powerful and thought-provoking about the human cost of war.  I encourage you to watch it in its entirety, and share it.

I always attend Vets for Peace (VFP) Memorial Day at the Vietnam Memorial on MN State Capitol grounds.  This year it’s 9:30 a.m. today (May 27).  Ordinarily there are perhaps 100 people, and it lasts about an hour.  It is a very rich observance.  Today rain is in the forecast…just come prepared. 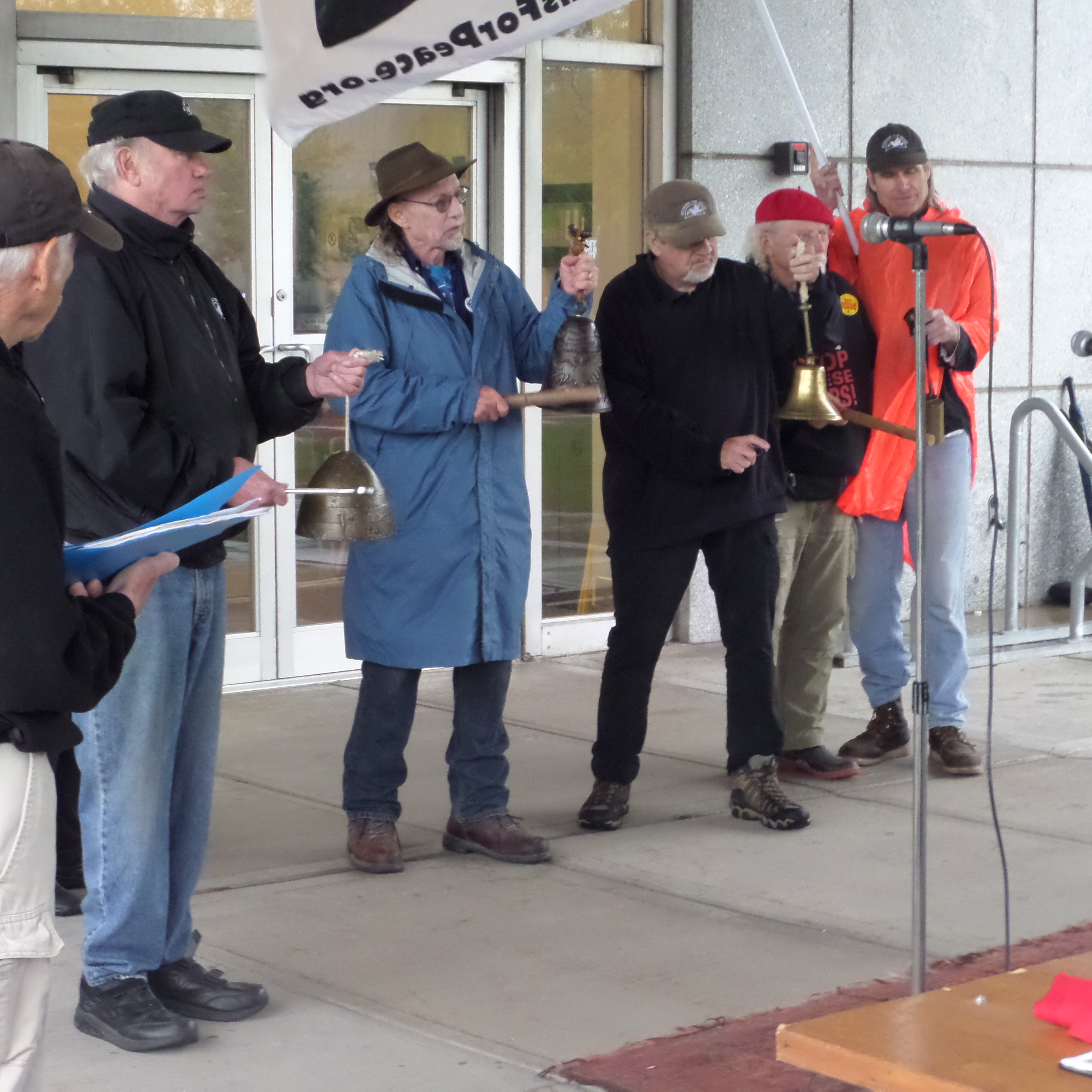 Ringing peace bells at conclusion of Vets for Peace observance May 27. Rain and chill moved the observance to the open, protected area, at the veterans service building on the Capitol Mall. About 100 hardy persons participated in the always meaning-filled program.  Stephen McKeown (at left) recommended an excellent editorial on peace from 1932 reprinted in todays Minneapolis Star Tribune, “The enduring ideals of Memorial Day“

Last Tuesday, along with Larry Johnson and Mike McDonald, past and current VFP presidents, and Elaine Wynne of the Resilience Project, the Vets for Peace were introduced to a gathering of about 40 Golden K Kiwanians in Roseville.  It was a very good gathering.  My contribution to the event was this handout, which you might find of interest: Memorial Day 2019001. 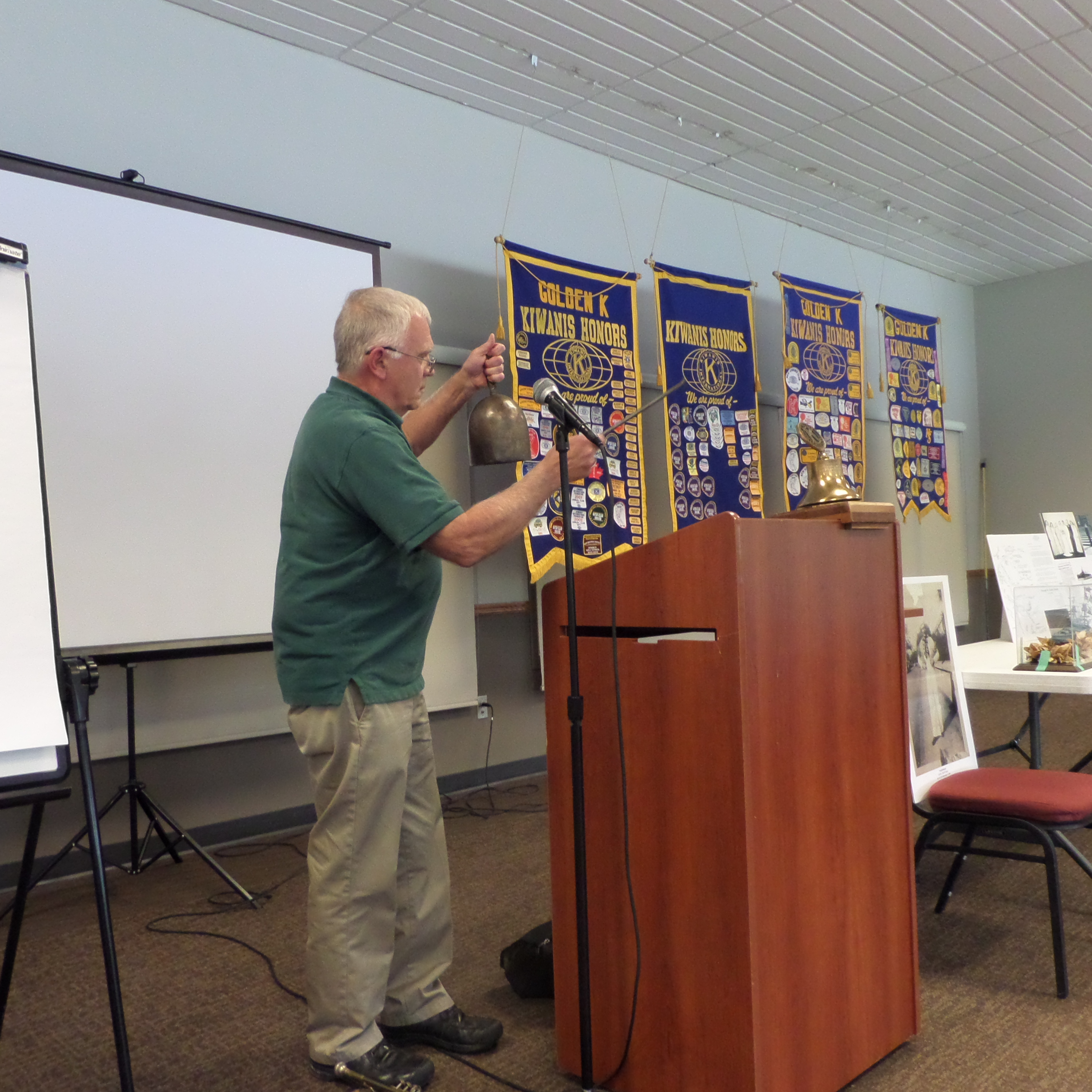 May 29: Larry Johnson’s letter was published in the Minneapolis Star Tribune:

Eliminate the profit motive for war

I second a recent letter writer’s call (“Remembrance, not profit,” May 27) to not support businesses that seek to profit from sales on the sacred day set aside to remember those who died in war. I would, however, take it several steps further, asking that we create a way to stop the even greater sacrilege of defense contractors generating enormous profits selling the weapons used in warfare.

A company should not be allowed to sell war materials unless their ratio of CEO pay to lowest paid worker is something like 10:1, roughly matching the military ratio of general-to-private pay — as opposed to 271:1, which is the average CEO-to-worker pay ratio.

I’d like us to figure out how to solve international differences without sending scores of young men and women out to kill and be killed, but until we do that, I vote for eliminating the profit motive, which I personally believe drives too much of our warfare. It’s right for business to make profit. It is wrong to profit from killing.

I come from a background filled with military, including my own.  As I write, this day, grandson Spencer is in the Marines.  My wife’s nephew, about 50, learned days ago that he is being recalled to Active duty in his Army Reserve Unit to an assignment in the middle east.  Our nation is again beating war drums, making threats.  We are in dangerous times.

Last Tuesday, I remembered six persons for this Memorial Day.

Two were KIA: Uncle Frank Bernard, USS Arizona Dec 7, 1941; and Max Soelch, likely killed somewhere in Russia in 1945 near the end of the war (he was a German conscript who refused to join the Nazis.  See End Note).

William L, a Korea vet, who killed himself on his 21st birthday in 1954.  As the story is told, he was at a bar, lamenting with friends how awful the war had been – a repetitive lament of his, I understand – and a ‘friend’ suggested that if it was so bad he should just go home and kill himself…and he did.  He was a relative I never met….  There are lots of William L’s, war casualties as well.

Then there was my Uncle George Busch, who survived three years in the Pacific theater as a Naval officer on the DD 460, USS Woodworth.  He seemed to have lived a normal life after service.

Mike L, my brother-in-law, was drafted about 1971, and was heading to a career in the Army, when someone decided that he was a potential subversive because he’d encouraged high school students to speak out against the Vietnam War when he was a high school teacher before being drafted.  His history is in a 22 page deposition I found in his house and still have in my possession.  It is scary reading.  He was apparently honorably discharged, early, as a Spec. 5th class.

I knew Mike well.  He spent most of his post Army life on disability due to mental illness.  When he lost his house near the end of his life, I found his dress green uniform crumpled in a drawer by his bedside.  I had it cleaned and for years it has been in the possession of the North Dakota Historical Society.

Finally, I remembered Lynn Elling, a personal hero who I met when he was 86.  Lynn was a peacenik first class.  He spent the last two years of WWII as an officer onboard an LST in the south Pacific.  His first duty action was at Tarawa beachhead, about a month after the deadly campaign had happened there.  You can read his story here.

These are just samples of some of those I remember today.

End Note: Max Soelch was Annelee Woodstrom’s Dad.  Annelee, our dear friend, published a book called War Child: Growing Up in Adolf Hitler’s Germany in 2003 (she was born 1926, and left Germany in 1947).  Her parents would not join the Nazi party, an action with consequences.  Her Dad, Max, a road engineer, was conscripted near the end of the war, and was probably about 40 when he died.  To this day the family has not absolutely confirmed any of the circumstances of his death.  Max is a permanently missing person.

As I write, Annelee has just completed a translation of War Child  into German, and it will be reprinted in Germany in the near future, and introduced at a major book fair in Germany this year. 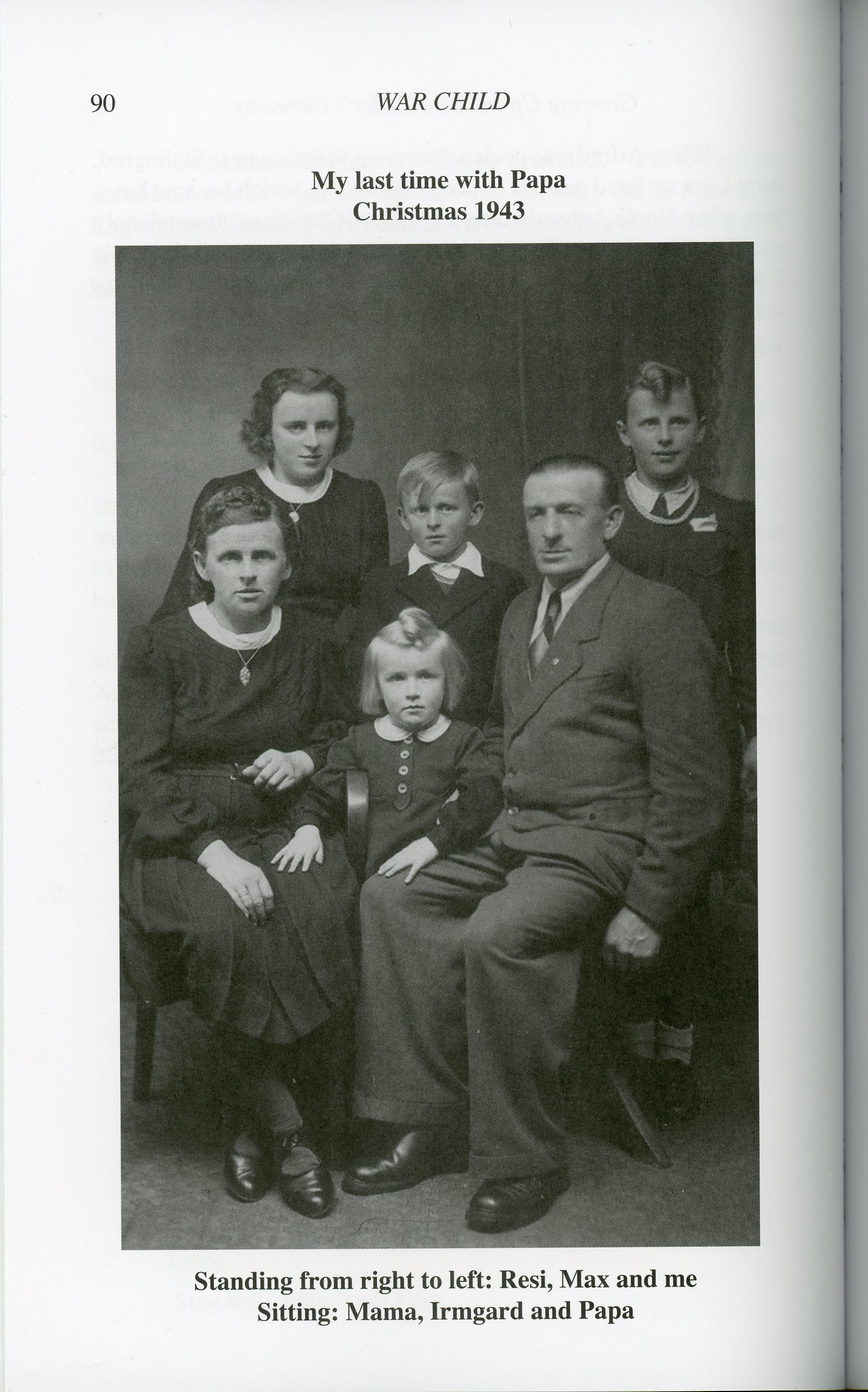