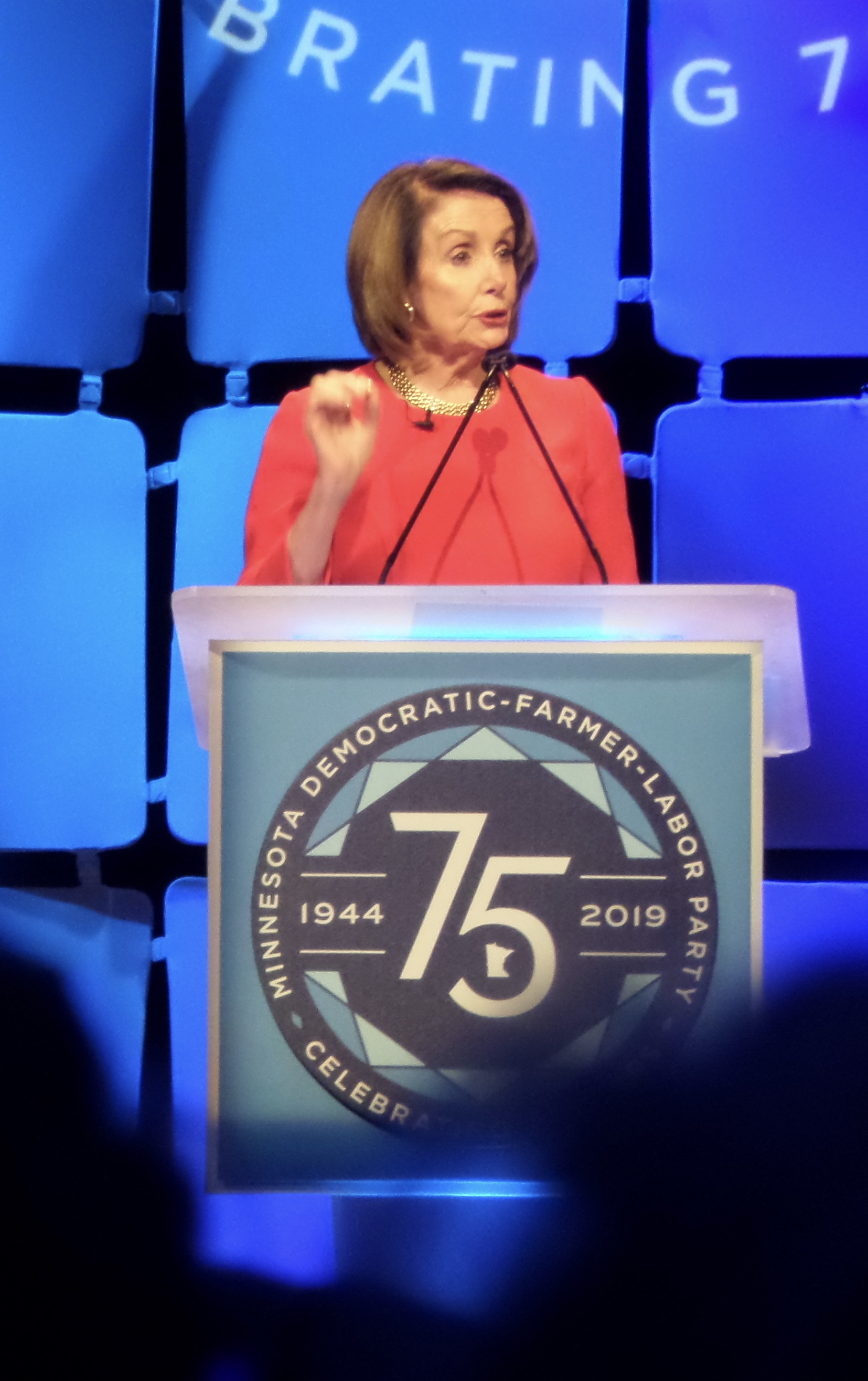 A month or two ago Cathy said she’d like to hear Nancy Pelosi, slated to be guest speaker at the Minnesota DFL’s 75th anniversary dinner May 24.  I wanted to see her as well – my opinion: she was an outstanding choice for Speaker – so last night, along with over 2000 others, we were at the Minneapolis Convention Center to hear Speaker Pelosi and many others (details: DFL 75th anniv 5-24-2019001).

The event, while long, far exceeded both of our expectations.  By my count, there were five male, ten female speakers in the approximate three hours.

Increasingly our DFL party represents the diversity of the people at large.  This complicates most everything, since differences of opinion are to be expected and need to be dealt with.  Will Rogers famously said, long ago, “I am not a member of any organized political party.  I am a Democrat“.   One speaker last night said: “diversity is strength, unity is power“.  Those six words requires lots of hard work.

It wasn’t part of the plan, of course, to have the theatrics at the White House a couple of days earlier.  Rep. Pelosi didn’t take the bait Friday: her talk was about the substance of what U.S. Government should be about.  She and Sen. Schumer had come to the White House to talk about the increasingly desperate need to deal with the national infrastructure – things like roads and bridges – which are aging and the cost increases every year to repair them, as do the risks.

Before the meal was served, I asked one of the wait staff how many they had prepared for.  His list showed a guarantee of 2045 meals at 210 tables of 10 each.  Six people among the attendees were people I knew.  I mention these facts simply to illustrate the business of the importance of networks.  We were among the fortunate who could actually attend the gathering and comment on the proceedings.  Several million were vote in the next election in Minnesota in 2020.  Network, network, network.

Sen. Amy Klobuchar, one of the many candidates for the 2020 Presidential nomination, gave the concluding speech – a gifted presentation of her story.  She has always been impressive since she first came out politically in 2005.  She’s in a tough competitive field, and there’s a long slog to the finish line next year, but don’t count her out.

Don’t forget, in the end, it is the individual – each of us – who make the difference. 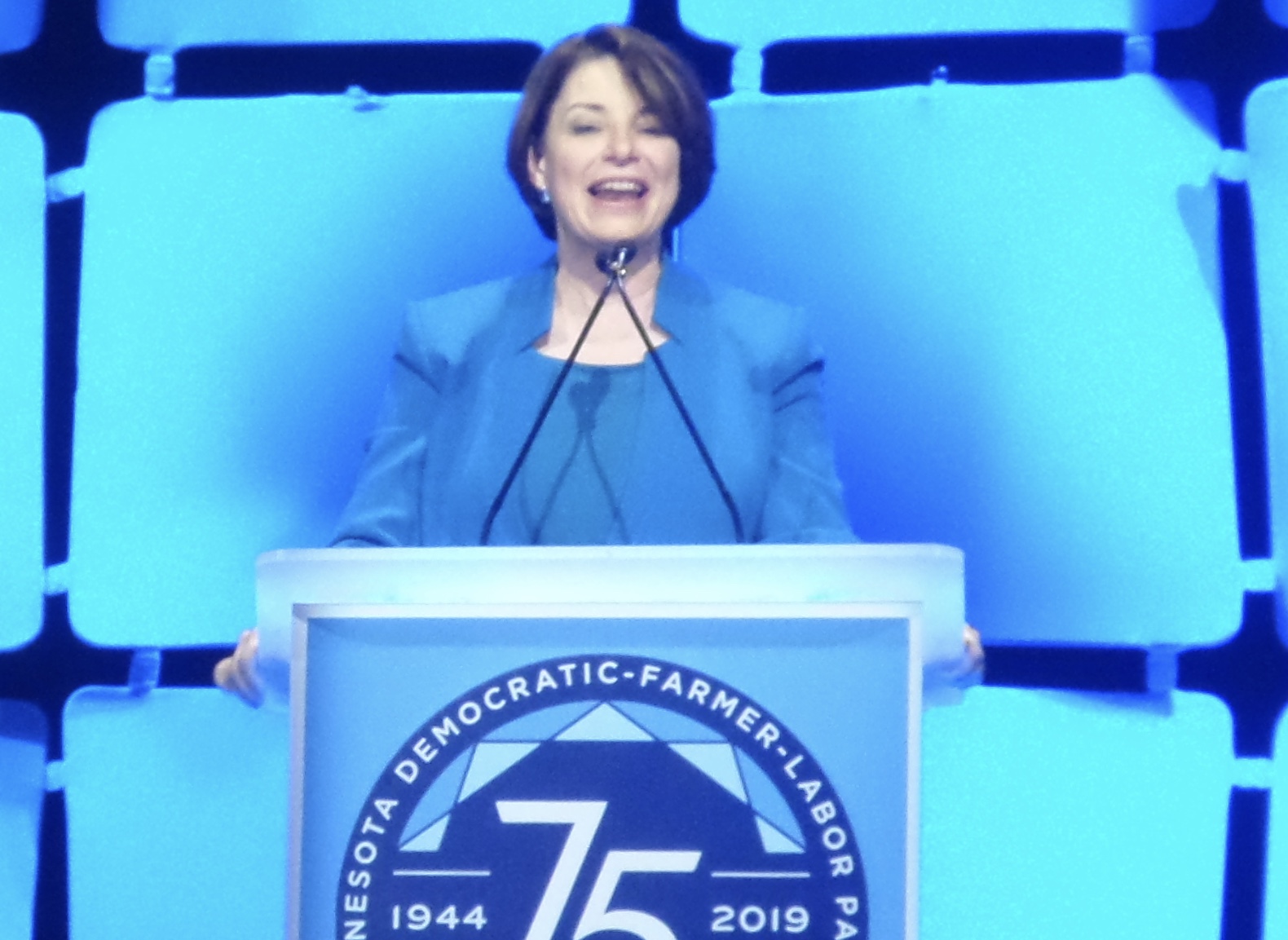 COMMENTS solicited especially from those in attendance at the dinner.

from Kathy McKay: I thought it was an impressive evening as well.  The issue of women in leadership In MN politics no longer feels like a reluctant politically correct gesture. Nancy Pelosi, Amy and Tina all were inspiring…focused on their work, the work of the people- making lives better for all.  Several of the awards went to women within the DFL.
One obvious exception was Patricia Torres Ray plaintive statement “I am lonely” being one of only two women of color FOR 30 YEARS in the MN state legislature.  She pleaded for party members to nurture and mentor young women of color to run for office.

Another disturbing reality was the very limited visibility of my representative Ilhan Omar. She was shown in early video of all reps in MN. Near end of event when party chair took the microphone to rally support for all upcoming elections he called out for support for Amy, Tina, and all MN Democratic MC’s except Rep. Omar. Intentional? Oversight?  Whatever the reason it was not corrected and I, as a CD5 member, am offended. She needs and deserves the support of the MN DFL machine.

Overall a very upbeat night.  Feel free to use my name, Dick.

from Dick, in response: I didn’t note any slight of Rep. Omar, and specifically I noted affirmation of Keith Ellison.

I have noted over the years that politicians including those who speak for the party are extremely careful about what they say because, as we know, words and distorted inflections by selective snips of photographs can easily be manipulated, and are.  Note the recent sickening distortion video of Nancy Pelosi’s speech in the last couple of days.  This is just one example.

from Jim:  I attended as did Jules , Georgiana , and Mel. Because of the security checks, we were more of less forced to get to our respective tables early. So time to mix was a bit short.

Nancy Pelosi focused on the needs of the country and the legislation that the House had passed since January, legislation that Mitch McConnell will never allow to see the light of day. She must have listed a dozen bills of significance. Her key line was (something like)
“We in the House can legislate and investigate at the same time”.
My greatest concern was the small number of young in the audience. Yes, there were a number of young Amy supporters passing out buttons, but there were few others. At my table, there were a young couple, but they were there because their grandfather (or granduncle?) had bought the tickets but was unable to attend (health?). So getting the young
to care still seems our greatest difficulty.
Response from Dick: The event last night was very good, and very long.  [T]here were two young women at our table, and they left even before they had their meal.  I don’t know why they left.  They didn’t seem annoyed or anything like that.  I sort of simply see it this way: last night was a very significant birthday party for the DFL and attracted over 2,000 people, most of whom are senior people who have money to support the party efforts.  The youth don’t like long meetings or speeches, I think, and are more spur of the moment.  They know this is important, I’d guess, but don’t expect them to be at long events like this.  That’s all I can offer.  The speakers, all of them, were super, we felt.  And the event was very well organized.  We didn’t get home till near 10 p.m.
from JoAnn: Thank you for this, Dick.  Joe and I were unable to attend.  Sounds like a spectacular evening.  I would add only that the young can’t easily spend the money for the event, and in many cases add a babysitter.
from Dick:  I agree, JoAnn.  I say as such above: “senior people who have money”.  I don’t see a simple solution to this huge problem.  There is a constant drumbeat to get money out of politics, but how to enact such an idealisti view into law is always the question, as you know.  Close one loophole, and another one is found, or enabled.  As you know, my drumbeat of sorts is that the young people and the women in particular just have to take over, and get in it for the long haul.  They will make mistakes, and they have, but is how all of us learn.  We are in a truly crucial time.
from Jules: One unusual thing affected attendance. The special session kept away a number of young legislators and their even younger aides.

from Karla:  Of course it is partly because of cost. Young people want to see dems take on issues not spin wheels on personalities. That will take care of itself.