See also, here.  This post includes a May 24 Letter from an American that deals specifically with the 100,000 casualties, thus far, from the COVID-19 Pandemic.  Peter Barus’ May 22 post, here, has much food for thought for all of us, relating to the current state of our country and the globe itself.  Take the time….

Today, 16 of us joined a Zoom for the annual Vets for Peace gathering.  It was different, but it worked well.  Here’s a bad photo (problem with my camera)…but you get the idea.  I suspect Zoom, et al, is becoming a new normal for all of us. 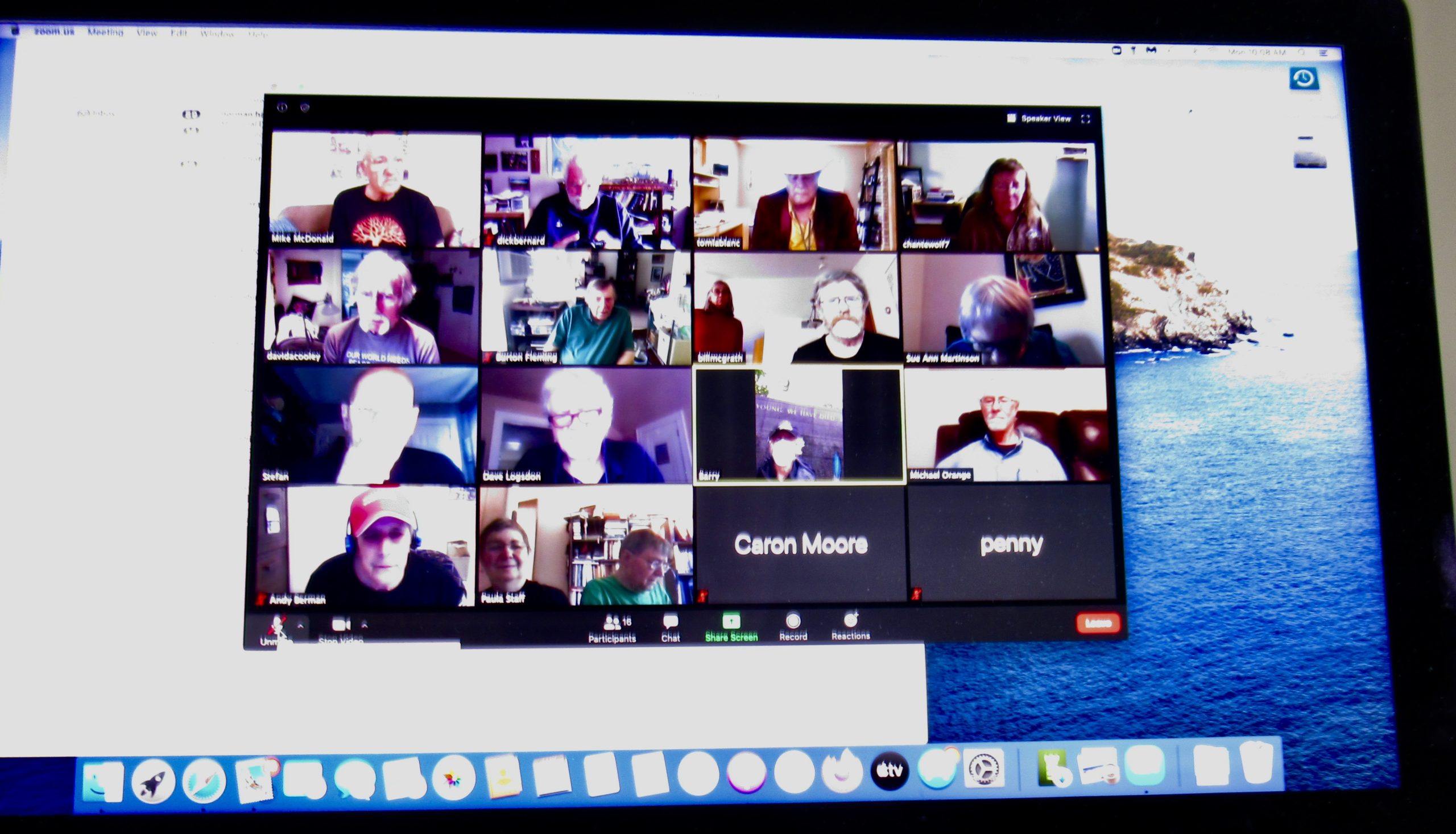 Everyone has their own point of view about/on this day.  This is a good day to practice the difficult skill of dialogue.  Here are some points of view, just from today.

Larry, former VFP President, referred us to a couple of letters in todays Minneapolis Star Tribune:

This Memorial Day feels different during this time of pandemic. Usually we honor our military, especially those who have died. Now, however, we seem to be expanding our thoughts about sacrifice and service. In my neighborhood, I see handmade signs on trash bins thanking sanitation workers for their service, signs near mailboxes thanking postal delivery people. We now hear grocery workers being mentioned as being “on the front lines,” of medical workers who have died from COVID-19 exposure as the “fallen.” It seems that we may be reconsidering what work actually keeps us safe, what forgotten service also implies sacrifice and also deserves our praise.

None of this is to diminish sincerely held willingness to do military service. But why do we honor only those? But perhaps the most profound honor we could give to military heroes would be to stop sending them to endless wars, perhaps to die or perhaps to live the rest of their lives impaired by wounds seen or unseen. Perhaps the greatest honor we could give our military “fallen” would be to stop making so many of them.

Sudden death lurks among us, sharpening our vision about what really matters. We demand that our legislators act to protect our loved ones according to our best science — not caving to talking points geared to wishful thinking. Will the coming special session stand out as Minnesota cares, or Minnesota kills?

As our state legislators debate where to focus our resources, let’s all remember that federal support for essential state and local needs has been shifted to wasteful Pentagon spending. Our country has stockpiled more than enough bombs to annihilate the world, but not enough virus-shielding gear to keep our health care providers alive. The U.S. has spent or obligated $6.4 trillion on wars in Afghanistan, Pakistan, Syria and Iraq, but we don’t have enough basic materials to test for a killer virus.

Let’s take a collective deep breath and realize: We need to shift from a culture of war to a culture of care. We demand that our legislators act to protect Minnesota lives with today’s 2020 vision. We have more than enough; we need to prioritize care.

Norm, long-time friend and activist, sent an e-mail recalling the day (Norm amended by addition today, and it is added at the end of the post):

Memorial Day was often cold and rainy or such is my memory of that special day from growing up.
I do remember the community marching from the high school to the cemetery led by some local WWII veterans and the high school band or at least members of it.  There would be a little ceremony, then blanks fired in a salute followed by the playing of taps.  I think that we then hiked back to the school for a little deal but maybe not and the vets went back to the American Legion club to reminisce and reflect.
I think that the local honor guard would then head out to the cemetery south of town and repeat the gun salute and the playing of taps and maybe out to another cemetery as well, i.e. Kalevala cemetery?.
I think that all ended for the most part by the early 50’s at least in terms of the community marching to the cemetery.
I also remember that we frequently would go over to visit the family and relative plots in the Barnum cemetery as well much more than I remember those sessions in the Cromwell cemetery.
Although they have all been canceled this year, there are always several Memorial Day programs at many of the local cemeteries as well as the VN et al memorials on the grounds of the state capitol.  I have never attended the service at the VN memorial but have visited that site at other times and found the names of two of my nine ROTC classmates, Banks and Coulliard, on the Minnesota memorial wall. Both John and Bruce were pilots and both were KIA in Viet Nam, 1966 and 1968 respectively.
There was an Oestrich kid from Cromwell who was killed in and/or during VN  and also a Carl Seagren (sp?) from the UMD AFROTC program.  I ran into his older brother, Len, at the O Club at Utapao when I was stationed there and he told me about his younger brother’s death at that time.  I cannot remember if Len told me that Carl had died as a result of military service or due to some other reason.
Time to remember Grandpa Smith’s service in the Army in Montana and the Phillipines as well as that of Uncle Rudy who was gassed in WWI while serving in Europe.  I think that his brother, Frank, also served in the Army at that time as well but I am not sure.
I can’t remember if Uncle Frank’s sons, Buddins and Brad, served in the military or not but they might have.
I don’t know if Uncle Fritz ever served in the military but maybe he did as well.
I don’t know if any of the Duluth Hanson’s served or not, however.
Then, there also were the Katzele boys, Gene and Ed, who served in the Navy during WWII as did Uncle George while Uncle Roger served in the Merchant Marines.
Distant cousin, Lester Harrison’s son, Craig, served in the Army in Korea as I recall. I remember Grandma Hanson encouraging me to correspond with Craig when he was in Korea and I did.  Craig then gave me all of his military hard ware, that is, ribbons and medals and so on, when he returned from Korea.  I guess that meant that he must have been able to read my handwritten lettes when they reached him in the Korean Peninsula. 😎
We all got to serve during the VNW [Vietnam?] as did Cousin Kirby, i.e. USAF, Coast Guard and the Army respectively.
I am sure that there are many other relatives that I have forgotten and/or never knew about their military service but our family did have its share of service men over the years and during various conflicts just as did so many, many families across the state and the country.
Dad did not get drafted to serve due to his age and his bad knees but did get appointed to the local draft board which probably did not make him all that popular in the Cromwell area when I think about it.
I had never really thought about that probability until much later in life.
Ah yes, Memorial Day, a time to reminisce and to reflect.😎
A colleague vet recalled time at Ft. Carson, which was where I served my two years.

Tom, commander of the local American Legion, did basic a couple of years before me at Ft. Carson and sent several e-mails, in part:

Do you remember a movie house on base called The Daniel Boone?
I got my first 3 day pass by disassembling my M1 rifle and naming all the parts.
I enjoyed the web site and photos.  [Dick: Go here, to second page, click Ft. Carson, and you’ll find 15 or so snapshots I took at Ft. Carson 1962-63.  Included, I think, is a photo of the base as it appeared when I was in.].
The barracks were the same as when I was there, kind of a yellow colored as I recalled them and with coal fired furnaces.
I, too, can still see Agony Hill in my mind.  I was able to make it up with a full pack
and rifle, but it took all I could muster up at the time.
Tanks were scary when on foot and a group of them passed by at high speed.
One could actually feel the ground vibrate.
As you say, memories.

Amended by addition by Norm:

I just noticed that I did not indicate where my brothers and I served during the VNW.
Hans was a career officer in the USAF and a helicopter pilot who served in VN working with the “little people” as he called them, that is the Montagnards, inserting their small units led by a Vietnamese officer, who often did not return with the unit when Hans and his colleagues picked them up a few days later. As you know, the Vietnamese hated the hill people including the Yards, Bru, and the Sioux seeing them an uncivilized backward folks.  Hans said that they would only tell him and his colleagues that their officer was KIA and unable to return with his unit.  Hans said that he and his colleagues always thought that friendly fire might have been a factor there but…
He did not work with the Hmong who were also hill people who were fighting with the CIA in the Secret War in Laos against the Pathet Lao.
I spent a year in Thailand with the B-52’s at Utapao AFB (technically a Thai navy base but the USAF extended the existing runway a bit from a few thousand feet enough to get the little puddle jumpers used by our Thai colleagues to 12,000 or so that could heavily loaded bombers and KC-135  tankers…) located about 90+ miles south of Bangkok on the Gulf of Thailand (Siam).
Actually, other than the initial 28-weeks spent at the joint USAF, NAVY and Marine photo/radar intelligence school at Lowry AFB in Denver, all of my active duty time as a Reserve office was spent as a photo/radar intelligence officer with the B-52’s.
Little brother, Rolf, spent his time as a Coast Guard office following OCS in Connecticut, on a buoy tender in Duluth and finished up in Boston at the CG station near where the Constitution is parked.
Again, just my brothers and I and nothing unique about it just as it was also the case with hundreds and thousands of families.
https://thoughtstowardsabetterworld.org/wp-content/uploads/2022/04/thoughts-300x138-1.jpg 0 0 dickbernard https://thoughtstowardsabetterworld.org/wp-content/uploads/2022/04/thoughts-300x138-1.jpg dickbernard2020-05-25 13:43:412020-05-25 20:41:46Memorial Day
0 replies