I knew the latest Minneapolis police incident would be front page news this morning.  All I didn’t know was exactly what it would look like.  Here’s the ‘above the fold’. 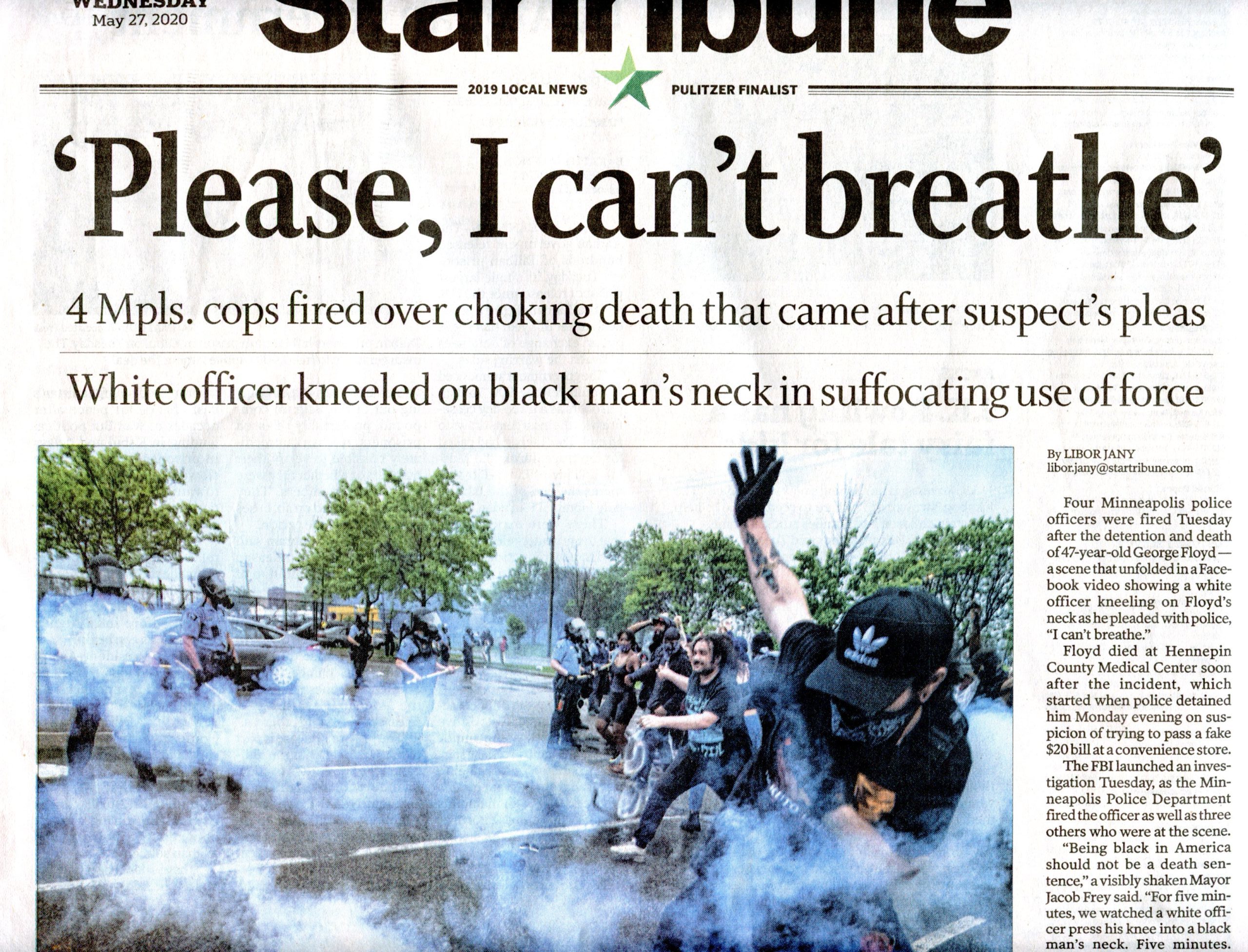 There will be a lot more to say about this, and other similar news.  We are subscribers to the Minneapolis Star Tribune, so this is today’s front page on our doorstep.  More can be read at the STrib website, here.  Todays editorial is about this case.

For those with an interest, I recommend highly a six part lecture series on racism I attended through our parish, Basilica of St. Mary, in February.  The first half of the series was in person; the last half was cancelled due to COVID-19, but all six parts are on video.

The faculty are all professors at the University of St. Thomas.  All presenters are white, by deliberate choice.  Episode 6 explains why.  Each are about an hour in length.  The series was extremely well done.  Do check it out.  Comments are solicited.  I will add to this post as time goes on.

25 years ago, on Martin Luther King Day, 1995, I was asked to comment at my church.  Here is the summary of what I said on that Sunday: Race, a personal view

BECOMING HUMAN: A LENTEN SERIES:  Along with about 50 others, I attended the first three of a planned six lecture series on this topic.  Each talk was powerful.  The last three had to be cancelled due to quarantine, but the speakers, all faculty at St. Thomas University, put all of the six lectures on video, and Basilica and St. Thomas have made them available to everyone, and I’m passing along with permission.  The syllabus is at the end of this post.  I have not included the links or followup activities.  Here are the links to the talks themselves.

POSTNOTE May 27: I take a short drive each day, and today I made a longer trip to the scene of the tragedy yesterday, 38th and Chicago in Minneapolis by Cup Foods.  Here’s the google map of the intersection and neighborhood.  When I drove to the area (about noon, westbound on 38th) a crowd had blocked the intersection and was orderly, and appeared mostly younger.

This story is an important one, unfortunately not unusual, and probably just beginning.

The Second headline below the above “100,000” and the rest of the front page is devoted to Corona Virus covid-19.
There is another editorial about the Floyd case today.
*
Most of my work career was spent sorting out facts from information so I don’t dash into indictments.
But there is a side-by-side comparison I’ll be making as this one progresses.
The Justine Rusczyk (aka Damond) killing happened about three years ago in south Minneapolis.
In 2019, Somali Minneapolis policeman Mohammed Noor got 12 1/2 years for killing her in the dark alley in south Minneapolis (my sidewalk analysis: a tragic accident).   Justine’s family got a $20 million settlement.  Two women, Minneapolis Mayor and Police Chief, lost their jobs.
Time will tell what justice means this time.

Welcome to The Basilica of Saint Mary’s Lenten Series on “Becoming Human.” Though of course we wish we could have continued the series in person, COVID-19 made online delivery necessary. We hope that this “online portal” to the series provides you with some ofthe tools that will be necessary to engage in the work of transforming our communities.

Key to this effort is learning the history of how white supremacy has been structured into the American legal system from its founding (week one), persisting beyond the era of Civil Rights especially through the “war on drugs” (week two), and leading to the contemporary reality of mass incarceration (week three). Learning the stages of development in racial identity can help to disrupt the “White Savior” complex, the tendency of white people to engage in efforts that are unhelpful at best, and patronizing at worst (week four). True social transformation can happen when there is a match between our unique gifts and the world’s need. As Frederick Buechner put it, “The place God calls you to is the place where your deep gladness and the world’s deep hunger meet” (week five). Since theology is a carrier, too, of white supremacy, learning about the Blackness of God might also help in recognizing the moral imperative behind this religious calling to engage in the work of social transformation (week six).

This series will echo the Christian cycle of creation-fall-redemption, starting with the theological idea that humans were created in the imago Dei, but fell into a sinful condition where persons, relations, and structures fail to function in the ways that God desires. Humans were created reflecting something of the divine life, but sin–especially the social sin associated with the domination of one over another–has diminished life, not only for people of color, but also for perpetrators. The final two sessions in the series will point to the hope that God is redeeming us from the condition in which we find ourselves. The series holds onto the hope that the Holy Spirit is at work in the world, enlightening us, empowering us, and encouraging us to resist systems of oppression, and to cooperate in the task of reclaiming our common humanity.

Statement from a well known and respected Interfaith organization in Minnesota can be read here.

from a long-time friend: Reference to George Floyd,  I think it’s safe to say that abusive law enforcement is not unique to your area.  The use of excessive force is something that we have also been dealing with out here in Seattle.  Our Seattle Police Department (SPD) has been under a DOJ consent decree since 2012 and after a change in leadership and revised training, that consent decree is about to be lifted.  But the actions of our SPD has never been as blatant as the outright murder of George Floyd.  An example of the worst case of SPD use of excessive force that I can think of was the killing of a Native American wood carver who was carrying his carving knife as he crossed the street.  We have also had problems with members of the King County sheriff’s office.  I have had a back and forth with the King County sheriff on this subject as well as with members of his team that participated in a bowling league that I played in.  The debate centered around their attitude and the resulting training to shoot-to-kill when they drew their weapon.  I pointed out to them that when I was 12, my sister Lila and I would throw stones into the air and shoot them with our 22 rifle.  We didn’t hit them every time, bit did so with sufficient frequency that we could conclude that we were never very far off.  The point I was trying to make was that if a trained police officer had shot the Native American wood carver in the leg, guess what he would be doing with his hands.  He would drop the knife and grab his leg.  There was no need to kill him because he didn’t respond to the police officer’s demands.  This would have also applied to the lady with the scissors that was shot by a police officer in Bossier City, LA.  I am no psychologist, but my observations of the some of the King County officers that I bowled with is that they seemed timid and didn’t seem to have high degree of confidence in themselves. This leads me to believe that there are guys that join law enforcement teams because it make them feel like tough guys, while they live in fear on the job.

Response from Dick:  As I’ve said at an earlier time, generally I’ve had few issues with police, including the Minneapolis group (our church is in Minneapolis, and a large place, so Mpls police are a regular and invited and positive presence).

On the other hand, Minneapolis historically has a very bad reputation when it comes to race, not so much recently, and the community knows this.  It will be most interesting to see how this plays out in the longer term.  A solution is not to immediately fire the chief and the mayor – they already did that in another high profile incident three years ago.
https://thoughtstowardsabetterworld.org/wp-content/uploads/2022/04/thoughts-300x138-1.jpg 0 0 dickbernard https://thoughtstowardsabetterworld.org/wp-content/uploads/2022/04/thoughts-300x138-1.jpg dickbernard2020-05-27 09:21:402020-05-31 15:38:10Dead Man Talking
0 replies