Today is beautiful in the Twin Cities – as WCCO-TV will correctly be able to say, “another Top Ten weather day”.  Of course, a day is much more than “weather”….

My walk is always good reflection time, and this morning I thought back to a long ago sermon I heard at Our Lady of Lourdes Catholic Church in Minneapolis.  The Gospel reading for the day was from Matthew chapter 22 verse 34-39.

The Priest finished the Gospel reading, and we sat down for his sermon.

He began by repeating the last phrase of the days Gospel: “You shall love your neighbor as yourself.”

Then he sat down, and said nothing further, and sat, and sat and sat.  Imagine yourself in the pew, that day, accustomed to hearing some message, and all you got was 6 words.  It’s not fair!!  After what seemed like hours, the Priest stood and continued the Mass.  We were left with the task of filling in the many blanks for ourselves, and I’m leaving you with the same blanks to fill, now many years later.

Out on the path this morning, somebody had neatly printed in at least five different places “Justice for Floyd“.    The same writer had a final message, in the same print: “Have a nice day!“, to which someone had added a postdate: “Thank you, too“.

At home I got restless, and decided I needed to take a drive down to Lake Street in Minneapolis, just to see whatever I could see from the car.

I crossed into Minneapolis on the Lake Street bridge over the Mississippi, and about the first sighting was the Dunn Brothers where I’ve had coffee from time to time – my cousin lives nearby.  Plywood was apparently being placed on the windows, or taken down – I’m not sure which.  This would be about 47th Avenue S, at W River Parkway.

At about 32nd Street, on my left was the remains of a Walgreens, burned to the ground, only a shell as remnant.  Lake Street was blocked at 29th, so I turned around and made my way a couple of blocks north, past St. Albert the Great, which was undamaged, and west to 27th, which was open, so I could see the remnants of the intersection I knew best, where GandhiMahal was.  This entire area was very much like a war zone must look.  The damage seemed mostly restricted to businesses on the major streets.  Only those who wished to destroy know why they picked the targets they did.

Gandhi Mahal, which I initially thought may have survived, has since burned to the ground.  I took a couple of photos.  In this one, Gandhi Mahal would be between the two folks at center, about a block behind them.  Of course, Gandhi Mahal no longer exists.  My friend, Ruhel Islam, who owns the restaurant is a man of indomitable spirit, and I think he will recover, with lots of help from many friends over the coming months.  There are many stories like his.  But everyone will need lots of help. 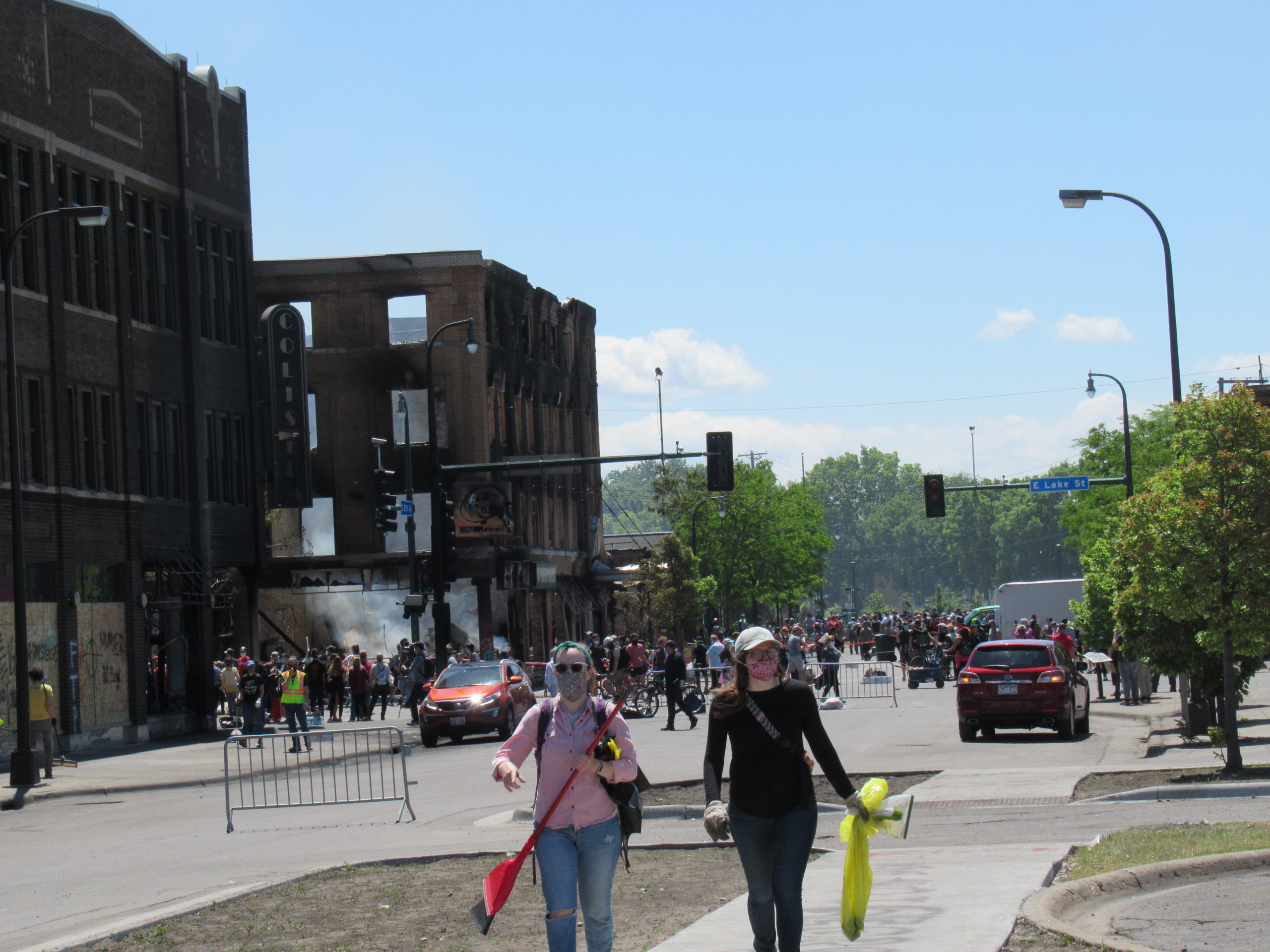 On this sad Saturday, I saw hundreds, if not thousands of ordinary folks walking down the streets with brooms, shovels and other tools of recovery, just coming to help in whatever way they could.  They came to give their hour or whatever, no questions, no demands.  They represented the diversity of the area.  There was no sense of defeat in these folks, such as the couple next to my car in the Aldi’s parking lot, who were simply sweeping the street in their vicinity.  My “thank you” to them was cordially received.  For everyone, every little bit helps.

Of course we’ll be barraged by analysis, fault-finding, blaming, on and on in coming days.  This is expected and needed.

But the Resurrection experience for the destroyed areas will truly be the common citizens who care, like whoever it was that wrote the sign in the park, to the quiet people with brooms and dustpans.

NOTE:  There have been amendments and quite a few comments to the previous post on this topic, and I doubtless will have another post with my own perceptions, perhaps tomorrow night, Mary 31,.  And, of course, other comments are solicited.  It is useful to check back – any comments received are shared

COMMENTS (more at end of page as well):

from Jane re Gandhi Mahal article in New York Times, here: Dick, this is about Gandhi Mahal, from the NY Times.  I too loved that place. Amazing people.
From The New York Times:  “Their Minneapolis Restaurant Burned, but They Back the Protest.  Though a Bangladeshi family lost their business in the uproar over the death of George Floyd, they support demonstrators and helped medics treat them.”

from Carol:  My son lives in So. Minneapolis and his church (City View) is a couple blocks from the 5th precinct.  He’s there now grilling – the church is buying food and feeding the neighborhood.  He says rumor has it that 70,000 plan to march on the 5th precinct tonight and burn it down.  He said the locals have been out for hours, cleaning up the streets.

from Darleen:  Thanks for the message and eye witness account of the destroyed area.  No one knows the who’s and the what’s, but I tend to believe that much of the damage was from bussed in protestors rather than people who live in the area.   I suppose it is a combination of both.  Tensions were running high and the virus pandemic frustrations played a role.  Be safe

from Corky: Are we better off  today vs yesterday? Has the main problem been sidetracked? Does 1968 come into view again? How do we begin to address the inequality issue in this country? For some reason ,  virus issues & personal home storm damages doesn’t even seem to be that important anymore. Time to reflect on the humanity in our country.

from Thomas:  I appreciate the first-hand update, Dick.  Hopefully the peaceful demonstrators will be off the streets by 8:00 p.m.  I know that me and my family are hunkered down in our residences.  Trust you’re the same.

from Nancy: I’ve enjoyed reading your thoughtful blog at this very sad and difficult time. Thank you.

from Thomas: I appreciate the first-hand update, Dick.  Hopefully the peaceful demonstrators will be off the streets by 8:00 p.m.  I know that me and my family are hunkered down in our residences.  Trust you’re the same.

from Bryan:  Thanks for the update.   Good to know things are calming down a bit.    Here’s a video I did of the situation here in Charlottesville, VA: