UPDATE June 2: Previous and related posts: May 27, 29 and 30.  Column by Ruhel Islam’s daughter in June 1, Washington Post, here.  John Noltner, A Piece of My Mind, has been interviewing people at 38th and Chicago, you can see these here.  PHOTOS AND MORE ADDED TO JUNE 1 POST.  The future of our nation is truly in our own hands.  Everyone must mobilize.

This and the previous three posts will constitute my ‘file’ about George Floyd.  Any additional comments or news will be added at the end of this, or one of the earlier posts.

I woke this morning contemplating the previous 72 hours, and the time since George Floyd died last Monday, May 25.  As May ends, I have a few thoughts to share, which are based on hope.  Today I am encouraged about the future.

What dominated my thoughts this morning were two photos I took December 2, 2015, at a Twin Cities Nursing Home. The event happened because of Ruhel Islam, owner of Gandhi Mahal, one of the businesses destroyed by fire a couple of nights ago. 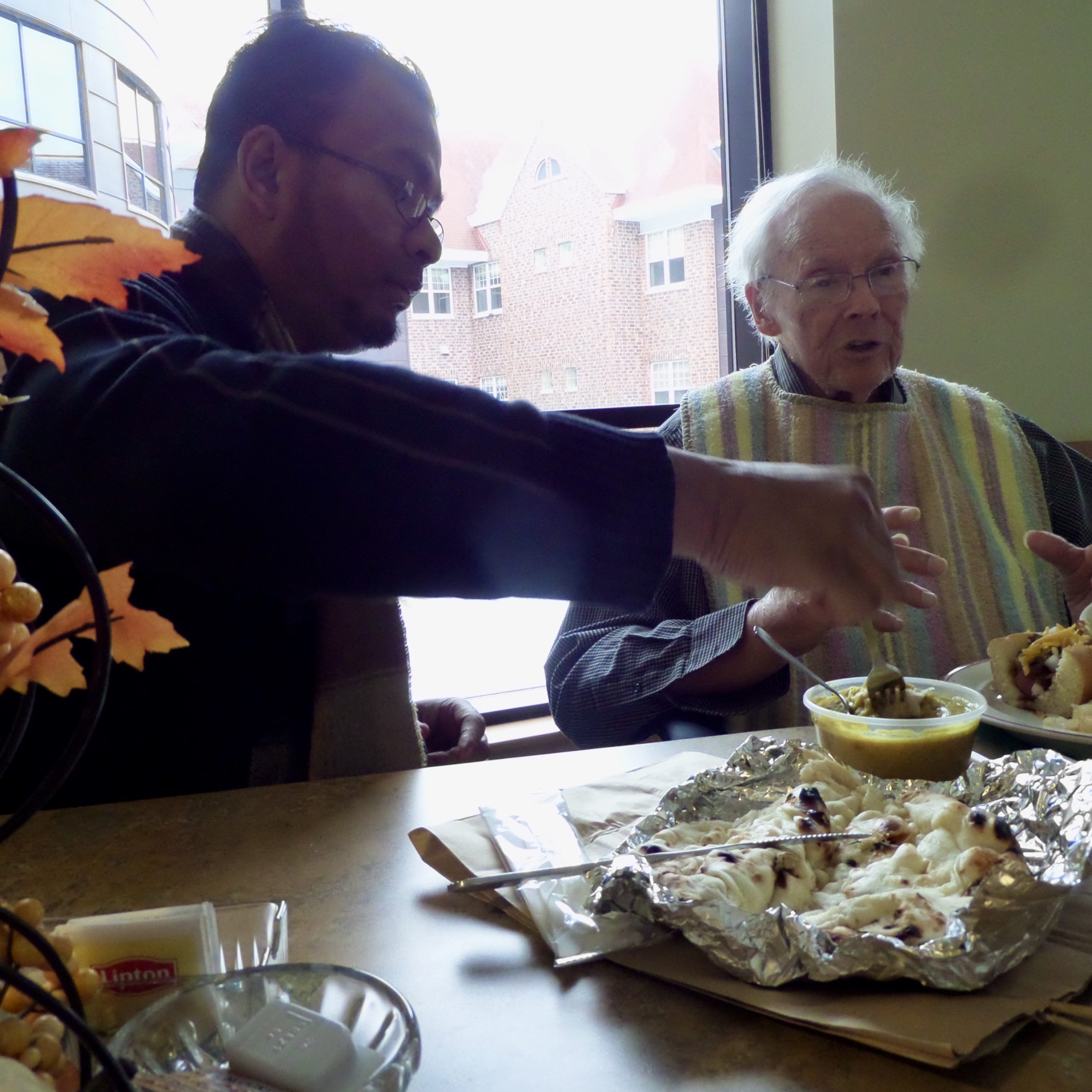 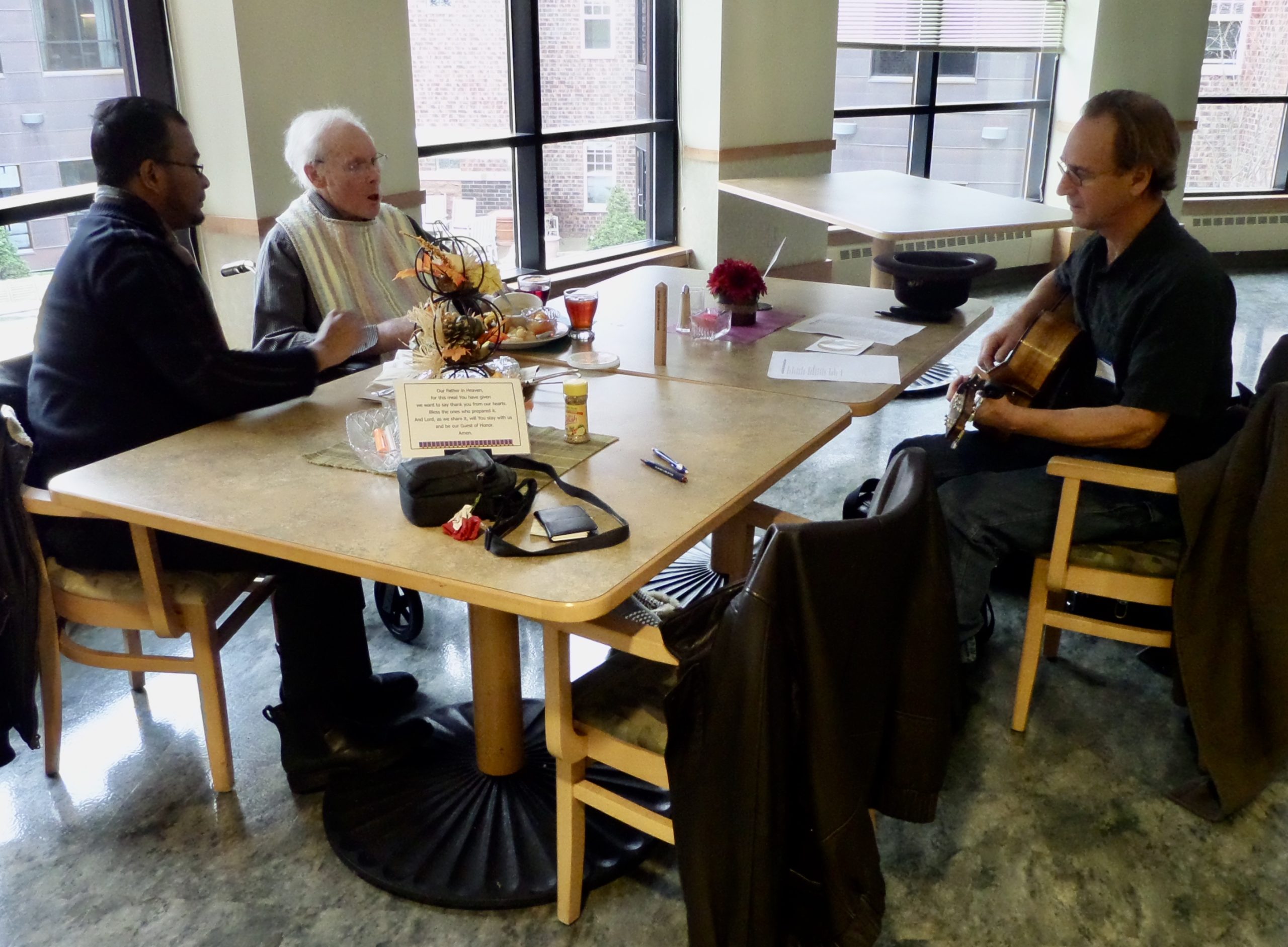 As I recall this day, Lynn, a legendary activist for peace, was on the trip towards eternity, and not long before had been admitted to a Nursing Home – I’m inclined to say Masonic Homes in Bloomington, but it may have been another at that time.  Ruhel, owner of Gandhi Mahal, a favorite restaurant for Lynn and his wife, Donna, suggested we take a meal to Lynn, and invited Larry Long.  Both knew Lynn from community activities.  I was Lynn’s friend and, this day, the chauffeur for Ruhel and Larry.

This visit is one I will never forget.  The meal was from Gandhi Mahal.  Ruhel fed Lynn.   Larry sang “Last Night I Had the Strangest Dream”. It was first class in every way.

Lynn died three months later, and at his Memorial service May 1, 2016, Ruhel attended and Larry sang.  It was a fine and deserved farewell to a man who took peace seriously.  Memories of the events and the men endure.

Five years later, a couple of nights ago, Ruhel’s restaurant burned to the ground, an indirect victim of someone’s deliberate arson.

The May 29  New York Times had an article about Gandhi Mahal, quoting Ruhel.  He and the restaurant will revive because of who, and how, he is.

The past few days and the future are important times for our city and everywhere.

In my mailbox Sunday morning, this, from my sister in rural Minnesota: “All of this this is too sickening to contemplate from a distance, but that’s where I am. I was glad that friend Judi and cousin Mary Kay were feeling safe and optimistic, in spite of the terror that has erupted near their neighborhoods. At this point in time COVID-19 seems inconsequential!  Any thoughts on how I can make a positive difference during this tragic time, please let me know.”

Also, from a valued relative in North Dakota: “They are in Fargo tonight Hope they do not come further west.Too bad that is all people have to do.”  (There were rumors on my end of the cities about groups gathering at Hudson WI.  Best I know, nothing but normal kinds of vigils and small local demos.)

Yesterday, a friend sent some wisdom shared in her neighborhood in St.Paul, which I included in yesterdays post, and which is included again at the end of this blog.  Is the list accurate?  Your choice.  Here are some more observations. 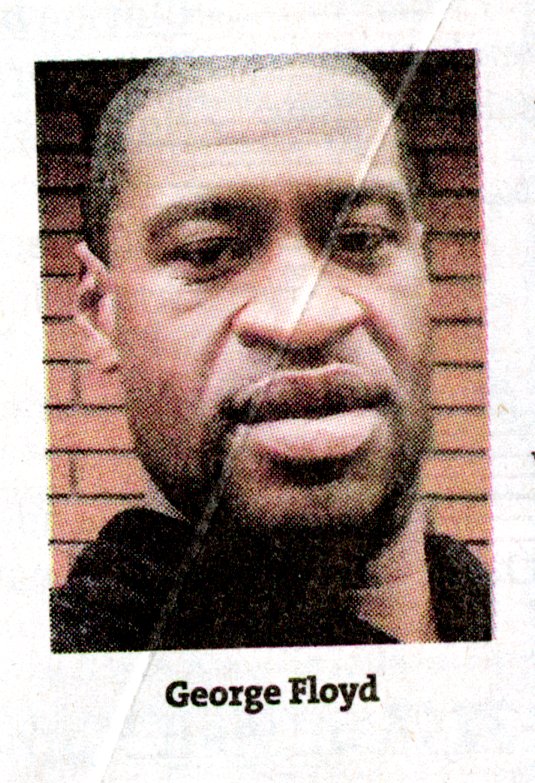 ‎Jesse Haug‎ to Lowertown, Saint Paul
9 hrs
A reminder that on nights like these, there are multiple distinct groups in action, with distinct goals and behaviors. Do not confuse one with another.

I’d group them into at least 5 categories.

1/
ACTIVISTS: They have clear goals, at least in their own heads. They are out to be heard and noticed. They may be nonviolent. If there is property damage, it will be targeted. Diff activists may have diff targets, but it won’t be indiscriminate.

2/
GRIEVING CITIZENS: They aren’t (yet) organized activists. They’re hurting deeply. They haven’t been heard. They have more anger than they know what to do with. They may cause unjust damage, even though their anger comes from a place of justice.

3/
ROWDY IDIOTS: They don’t give a shit about justice. They just want to fuck shit up. They’ll mingle with the activists, even though activists are ultimately a nuisance to them. They’ll come like moths to a light any time things are going off the rails.

4/
CHAOS AGENTS: Like rowdy idiots, they want to fuck shit up. But like activists, they have a goal and are self-controlled. They’re here to escalate, create an opening, make others look bad. Prime examples: alt-right instigators and crooked police. (There’s overlap.)

5/
PROFESSIONAL THIEVES: Whenever there’s chaos, there’s an opportunity to make a buck. Some of the “looting” has actually been well-organized, coordinated hits: post a lookout, designated grabber, getaway car.

6/
There may be more groups I’ve overlooked.

I say all of this to point out the danger of using the word “protesters” for everyone out there tonight. If, for example, you say, “protesters need to stop burning buildings,” which of these groups are you are referring to? Be specific, not vague or generalizing.

Above all, be careful that you do not wrongly ascribe to ACTIVISTS and GRIEVING CITIZENS the actions of the other three groups. That is just what those other groups want.

The need for justice is real. The grief is real. Take them seriously. Respect them. 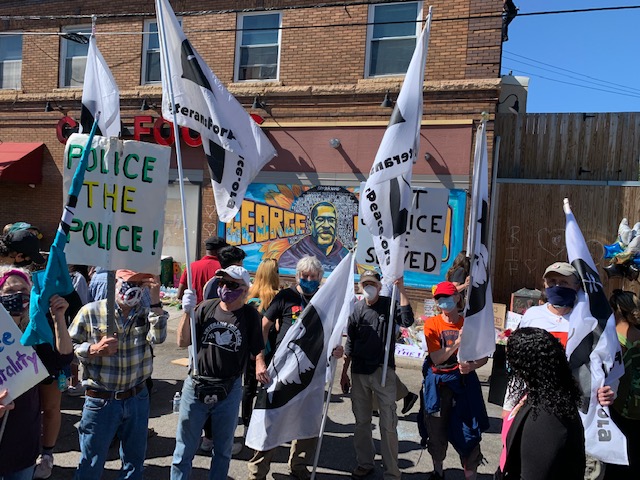 POSTNOTE June 1, 2020:  I choose to use this time in our history as a learning opportunity.  The good old days that some in my generation revere, were in reality not all that good, and even if they were idyllic, they are no more (including the recent past).  Within these most recent posts is a great deal of useful information, if you care to learn more.  The neighborhoods I’m most familiar with are here.  The I-35 W bridge incident last night was about three miles straight north of Lake Street.  Much of the damage was along Lake Street.  Neighborhoods were less affected.  There was some damage in St. Paul as well.

There is a meme about that certain groups were responsible: African-American, outsiders, etc.  Drive these streets and they are regular neighborhoods, basically well kept.  Why would they destroy the shops in their area?  As pointed out above, protests these days are motley crews, populated by more than simply people with a grievance, in this case witnessing the murder of a black man by police in broad daylight.  The Twin Cities is my home, for most of the last 55 years.  It is rich in diversity, full of good people.  It also has a deserved negative reputation for abundant sins of discrimination in the past, including the 1967 riots.

Every single one of us has responsibility here, in what we see, say and do, particularly from this point on.  This is not a matter of ‘them’; it a matter of ‘us’.

Images A Year
Scroll to top