About this time of day, one year ago today, we were about to leave for AMTRAK station in St. Paul Minnesota, enroute to 14 days beginning at Seattle, south to Davis, California then back via Denver.  It was a memorable trip, celebrating six months out from major heart surgery December 4, 2018.

There are trainloads of wonderful memories, and lots of photos.  My preference is to not pick and choose what to publicize from that trip.

It was a very different time, then, before COVID-19, and everything else that troubles our country at this time in our history.

May there be better news next year at this time.

Have a great day.

I do offer a wonderful short video received today from a friend who is a retired teacher, sent to her by another retired teacher.  It’s about 3 minutes, a powerful lesson.  Watch to the end….

If you haven’t visited lately, the last four posts of May were about the George Floyd tragedy, May 27, 29, 30, 31, 2020.  There will doubtless be more: the George Floyd killing is a crucial issue in my 80 years living in this country.  Check back once in awhile.

I drove down Lake Street right before noon.  Quiet.  Still closed at 29th.  Still all boarded up.  The burned out remains of Walgreens at about 31st is the first destroyed building.  This time I went a block south when diverted, rather than north, and the adjoining east/west street was very busy around Holy Trinity Church which seems a local epicenter for aid.  Lots of people carrying lots of bottled water.  Peaceful.  Orderly.  Holy Trinity is a block southeast, as the crow flies, from Gandhi Mahal site.

This afternoon, I learned that my church, Basilica of St.Mary, had incurred some fire bomb damage on Thursday.  The Pastor describes the incident here.  Luckily there was relatively little damage.

I will endeavor to give brief updates each day, here.  Continuing comments are welcome.  I’m adding one comment received today at the end of this blog.

In my e-mail, overnight, presented strictly as received: 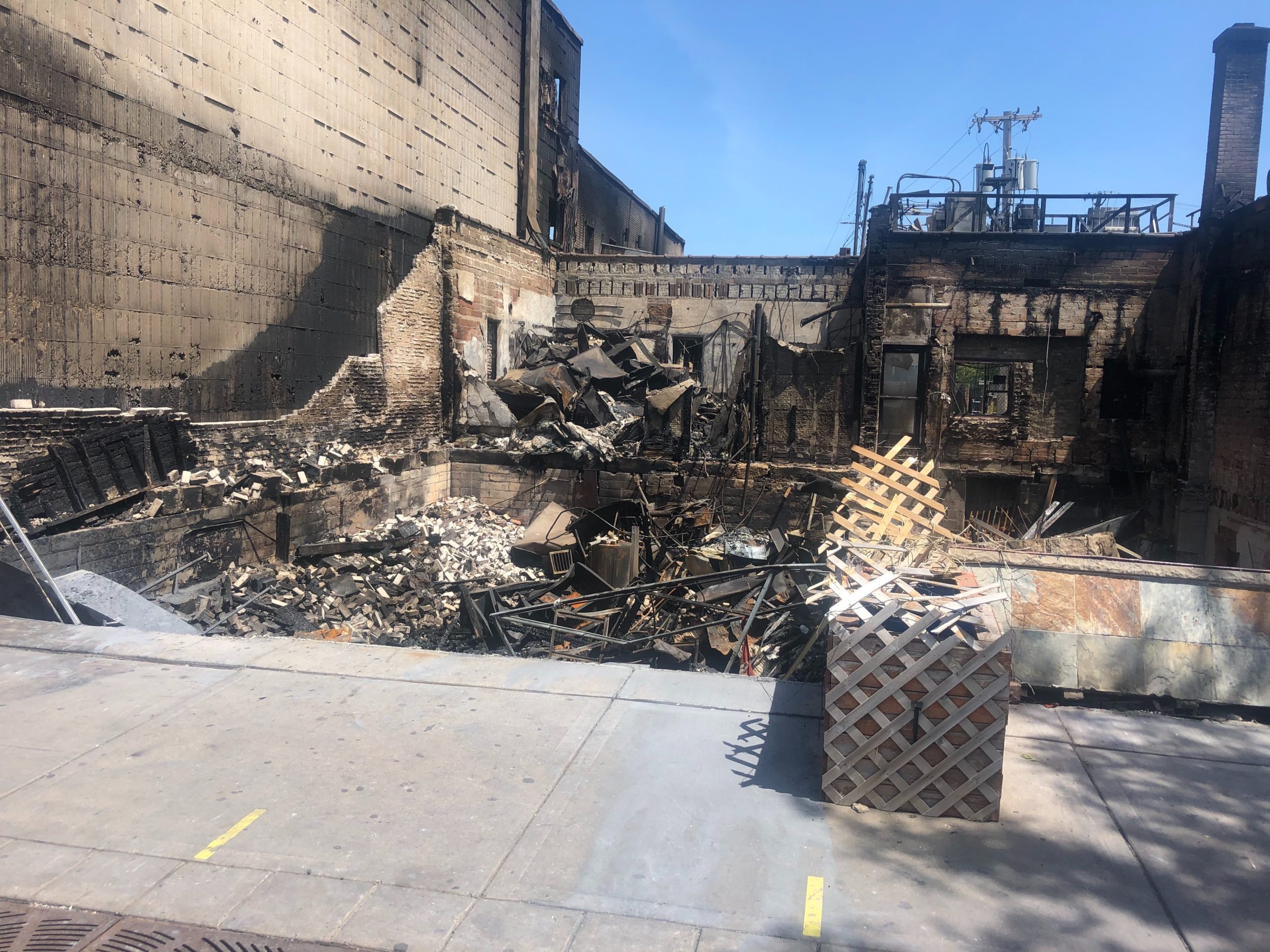 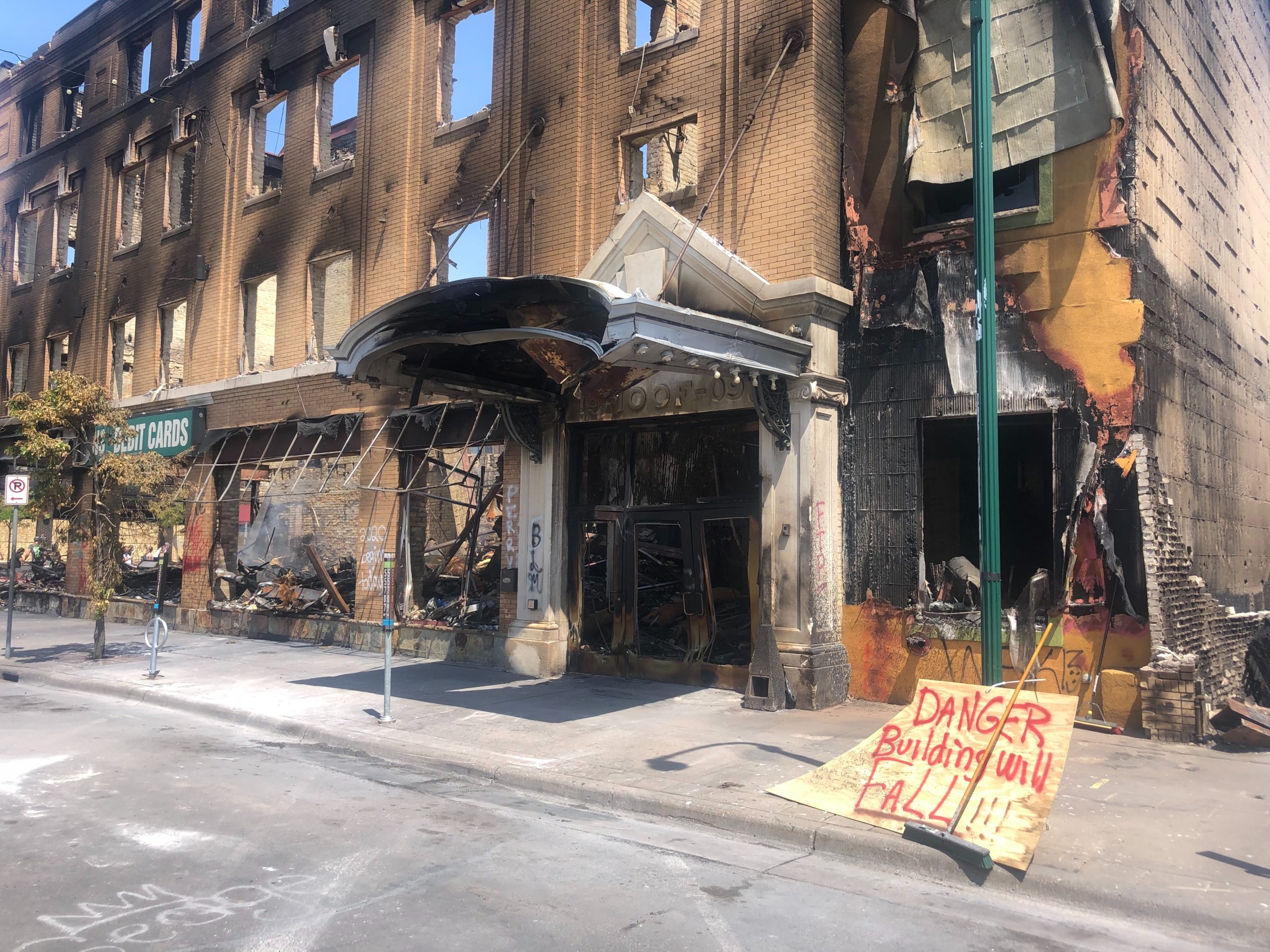 from my long-time friend, June, retired university professor: Hi Dick,  These are scary times.  I hope we make it through this.  I have been sharing the post below.  I hope your day is a good one.

I’m doing a lot of reading of posts on Facebook from around the Twin Cities.

One person posted that they were on a plane filled with white supremacists who were all openly discussing their plans.

Some one else stated that she heard that at least eight thousand are trying to or planning to get to Minneapolis by Tuesday.

Someone else said that there are a lot of Vigilantes holing up in hotels and motels out in The Burbs and driving into the city.

Evidently, cars are being stolen and that’s why there are no license plates on a lot of these brand new SUVs and trucks. Where they are stealing them from, I have no idea. But I also know that not everyone is stealing SUVs / trucks and many are just plain driving up here from places like Texas, Indiana, Wisconsin… Just to name three states that keep coming up over and over as well as, of course, Minnesota.

Someone I went to High School with reported that people were driving through her neighborhood threatening to kill everyone. I’ve heard a lot of reports like that all over Facebook… People talking about groups of people driving through their neighborhood threatening people and traveling with a lot of weapons. (I know that there has been push- back on people over this curfew issue… Some people just wanting to sit on their porches and sit on the steps, others who believe quite naively that just because they are peaceful that they can still continue to protest and walk around– in light of all of these terrorists driving around and threatening folks, it’s better to adhere to the curfew and stay indoors if you are not patrolling your neighborhood)

One person spoke of reporting to the authorities that she had seen people who had stopped somewhere and she was able to see that their truck was filled with all sorts of flammable chemicals.

These folks are not playing! They are hell-bent on either taking over the city or taking us down completely! The trouble is that we’re not the only city; they’re hitting other cities at the same time as they are hitting ours. It really is a game of whack-a-mole!

To those people who don’t believe me, like a couple of people I know who really feel that I’m being overdramatic, you have no idea… This is a f****** nightmare and I guess we going to be awake for a long time trying to figure out how we’re going to counteract all of this.

And just so you know, if you think because you live in the suburbs or some of these small towns, that this violence is not going to touch you, you better think again. They’ve already made their way up to Northern Minnesota… Bemidji, Iron Range, Duluth… They’re even hitting places like Rochester… Even Fargo\Moorhead area… No One Is Safe!

The protest against George Floyd, of course has nothing to do with any of this … These folks have been training and planning this for a very long time looking for an opening and they found one!

Just Above Sunset, Finally Losing It All, The President declares war…on who?

The 2019 West Coast Trip: we arrived in Seattle late morning June 3, a year ago.  Later in June I’ll post with a summary of the 13 days ‘on the road’.   Check back once in awhile.

from Carole, a long-time trusted friend:

Minnesota and National resources that can be used to find similar resources in your area:

How to Help NOW by Jamie Fischer (Facebook link).  Many resources linked here.
Anti-racism Resources: Sarah Sophie Flicker (Twitter) and Alyssa Klein (also Twitter). Many resources linked here.
from Melanie:
I saw your latest post with the photos and the  scary things happening post.  And I listened to the conference call with the Governors.  Also the Gov. of NY.
I wonder if you would like to share Trevor Noah’s so eloquently put comments. [very powerful.  Ed.]
from Barry: I am not sure whether to thank you or not. Just as my anxiety is lessening a bit I read your blog. So we start all over again. I hope they will find something better to do with themselves. There are a lot more than 8,000 residents in MN and if we organize and stand together and not allow their madness we will be ok.
I think getting together to help out Gandhi Mahal would be a good place to focus our energy.
Dick to Barry: I certainly don’t need thanks, and maybe you over-interpreted what I was saying.  I’m just not going to spend weeks and month rehashing the same issue over and over again.  I have the ‘file’ open on George Floyd, and it is always there (May 27, 29, 30, 31, June 1).  This afternoon I was thinking of some other thread I’d like to comment on sometime this month.  I don’t have a lot of readers but they are a diverse lot, and my hope is that the ones who think I’m hopelessly liberal, or naive, will at least keep visiting.  Anyway, let’s talk a little more about your concern.  I wish we could meet in person – that’s my preference.  But however, keep talking.  I’ll add your comment, and probably include my response there as well.  Thanks again.
from Roland: The damages to business places etc seems ok to you.
Dick to Roland: Maybe I’m a very poor communicator.  The business destroyed is of a close personal friend of mine.  I’m wondering what your issue is, Rollie.  I don’t mind disagreement but I’d like to know exactly what the disagreement is.   The person who owns the business I’ve high-lited (Ruhel Islam of Gandhi Mahal) is grateful that I publicized his loss.  He’ll come back, I’m certain, better than ever.

from Darleen:  I thought you’d be getting a closer view and a view for yourself.   I appreciate your insights.

From what I heard, MN protestors are- peaceful and grieving, but the AFTENA (sp) [antifada] group from
out of state is the violent group and have stirred up violence across the US.   Be safe.
Dick to Darleen:  It is too early to know what involvement this nebulous bunch called “antifada” had (they are labelled as “radical left” and specifically identified last night.  They deserve scrutiny, certainly.  Most likely the antagonists, the destroyers, were what loosely called “white nationalists”.  Sometime this month I’ll likely do a specific commentary on this group who think they can control by violence and who likely have exploited Floyd’s death (my opinion).

June 3, from Mary in Rochester NY:   And the beat goes on!!  But becoming a bit more focused on purpose and less on wanton destruction,  Rochester is one of the cities on curfew and one of the cities where there is a lot of local commentary and justification.  Too many answers, too few questions, too little accountability.

It is quiet where I live, it is just an ordinary Wednesday with trash pickup and dog walkers.
Many of my fellow health care workers on the night shift at the nursing home just down the street live in ‘the hoods’ – affecting ability to get to work, affecting ability to focus on work, affecting enthusiasm for work, and so subsequently, for those who don’t have as many external motivators and de-motivators affecting work, the work is more difficult with even shorter staffing.  Seems a bit of a vicious circle and much like the chain of infection we learned so much about with corona, it continues to take serious efforts at interruption to break the contagion.
Yeah, it takes a village but if there is to be peace, it must begin with an individual’s commitment to the possibiity…..start by doing unto others as you would have them do unto you!  Remember the message of Pentecost.
https://thoughtstowardsabetterworld.org/wp-content/uploads/2022/04/thoughts-300x138-1.jpg 0 0 dickbernard https://thoughtstowardsabetterworld.org/wp-content/uploads/2022/04/thoughts-300x138-1.jpg dickbernard2020-06-01 19:57:312020-06-04 04:50:17A Year
0 replies

Learning. Schools out
Scroll to top