Friend Molly occasionally sends around a few friends on her mailing list.  Here’s the weekend version, less than a page: Molly May 23, 2020 (click on image to enlarge it)

May 24: from Joyce, Letter from an American.

This is not an ordinary Memorial Day.

This year there will be no in-person gathering:no permit for the traditional large gathering of Vets for Peace. For many years, it has been an annual tradition to gather at the Vietnam Memorial on the Minnesota State Capitol grounds on Memorial Day.  It has been a rare year that I have been absent from this event.

This year, two alternative events are scheduled, one on Sunday live-stream on KFAI-FM; the other via ZOOM on Memorial Day, both at 10 a.m..  All details, including links, are here.  At the same link is access to several other programs.

Here’s my friend, and Memorial Day commemoration organizer, Barry Riesch at the Minnesota Wall, Memorial Day, May 26, 2014. Barry is identifying Marine Joseph Sommerhauser.  Barry and Joseph went to the same high school in St. Paul; Joseph is the younger brother of my barber, Tom, himself a Marine and Vietnam combat vet.

Joseph enlisted after high school and didn’t make a year as a Marine before he died in war, 1968. 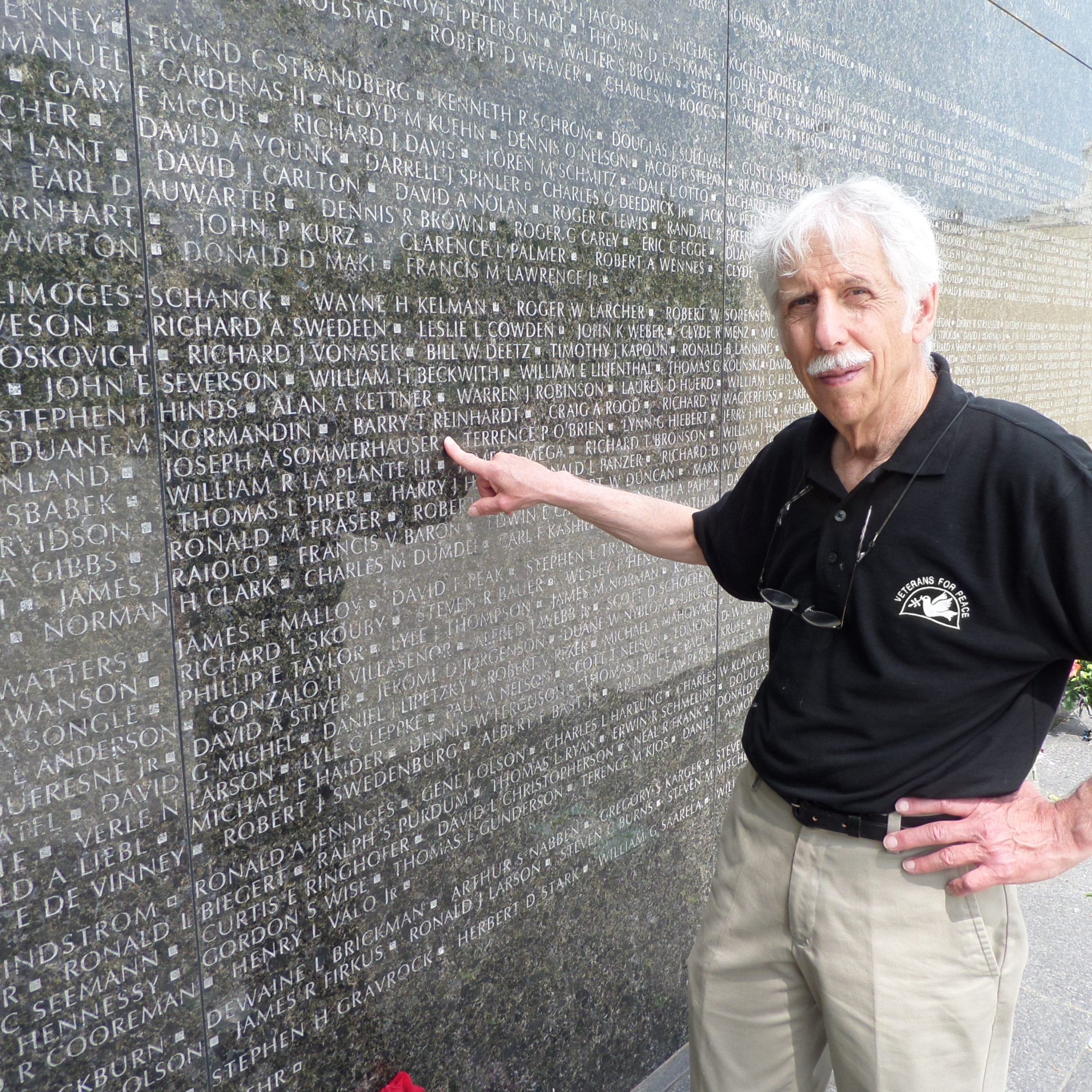 Memorial Day, May 26, 2014, at the Memorial Wall on Minnesota State Capitol Grounds.

Now we’re engaged in another war.  We are all ‘boots on the ground’.  This year it isn’t somewhere over there, long ago.  It’s right here.  We’ll probably go over 100,000 American deaths from COVID-19 this weekend.(58,220 Americans died in the Vietnam War in 10 years.)  In another sense, we’re in a bizarre combat against each other….  Be safe.

May 15, one of my daughters asked me, and my two brothers, to remember our own military service.  We all complied.  I decided to go into a little more detail.  It’s here, if you wish: Remembering war, May 23, 2020 (click on the image to enlarge it)

And today’s Just Above Sunset is. on point as well: Not This Year.

Check back for future posts.  The next one will likely be titled “The Pawns”, within the week.

from Jermitt: I read your stories on your families military experience and found them interesting.  I think you probably read my personal story of my military experience.  I recently did some research on two of my dad’s brothers who were both wounded during WWII.  I was able track their location on the day each one was wounded.  I also lost a cousin in Vietnam, who name is on the WALL.  A second distant cousin was also killed in Vietnam war. Thanks for sharing, Dick.

from Alan, Quotations for this Memorial Day.  I highly recommend Alan’s frequent commentaries at Just Above Sunset.

from Mark: thank you for pulling all these threads together – that Peter Barus piece is incredible

from Richard, (his brother Don, 90, is our good friend across the street):  FYI, both Don and I are vets- he was in Germany, just post WWII; and, though I applied for Germany, was sent to the Far East- just at the wind-down of the Korean War. Don was in anti-aircraft and, I believe, they did firing practice over the Baltic Sea. Later, he was stationed in So. Bavaria. He took advantage of his free time and travelled all over Europe and No. Africa- Morocco and/or Algiers.  You may have seen his photo on a camel- I guess he travelled to France and all, mostly by motorcycle with friend. It turns out (re your article), I was stationed at Fort Carson, CO– and was in ‘fire-direction artillery’ (155’s); and nearly every week we’d do fire practice on the plains near the base of Cheyenne Mt. Another recollection at that time re combat fatigue was that of a Sgt., who was assigned with us in our fire direction center tent. He had recently returned from the heat of the Korean War, and would dive for the ground every time we fired the 5 or 6, 155mm cannons, knocking over our tables with maps, etc. It was uncontrollable for him, even though he knew when we were giving an order to fire. The term then was ‘shell-shock’.

That and other stories by our cadre returning from Korea were a bit un-nerving when my orders came down to be sent to Seoul, Korea, near the DMZ. However, on the way, one of our two military planes lost an engine and had to return to Ft Ord, CA, so my plane was diverted to the AFFE Headquarters-Rear in Japan. Fortunately for me, I was there for almost a year and loved it. I travelled a lot when off duty in Japan, even visited Nagasaki (that was about 10 yrs after the atomic bomb was dropped there, ending WWII). My military tour highlight though was when, having trained in swimming and diving throughout HS and at Macalester College, I participated in the AFFE ‘All-Japan’ and the ‘Far-East’ Swimming and Diving championships in Osaka, Japan.

Fortunately, because of the time in service, neither Don nor I had to be engaged in combat.

Peter Barus: You Have More Power Than The President Memorial Day
Scroll to top