Today, at least for Roman Catholics, is the First Sunday of Advent. It will be noticed today at my Church, Basilica of St. Mary, Minneapolis.
As with most everything in our diverse society, there are many definitions of the meaning of this liturgical season, the four Sundays between now and Christmas Day, December 25. Here’s “Advent” as found in google entries.
I happen to be Catholic, actually quite active, I’d say. This would make me a subset of a subset of the American population.
In all ways, the U.S. is a diverse country. The Statistical Abstract of the United States, published by the Census Bureau, says about 80% of adult Americans describe themselves as “Christian”; 25% of this same population says they’re “Catholic”. (The data is here.)
Of course, if you’re a “boots on the ground” person, as I am, raw data like the above pretty quickly devolves. As the most appropriate mantra at Basilica of St. Mary in Minneapolis (my church) is stated every Sunday: “welcome, wherever you are on your faith journey….” The people in the pews know the truth of this phrase, and know that on every given Sunday, two-thirds of them are not even in the pews.
Regardless of specific belief, the vast majority of us, everywhere, are good people*.
I’m drawn to this topic a bit more than usual this weekend since I just returned from a visit to my last surviving Uncle, Vince, winding down his long life in a wonderful nursing home in a small North Dakota town.
Thanksgiving Day I decided to bring to him, for hanging in his room, the below holy family** (which had not yet been hung, and appears sideways, as it appeared in his room, prior to hanging.)
(click to enlarge) 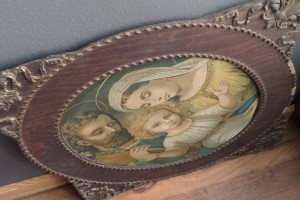 For many years this image hung in the family farm home, and Vince seemed glad to see it come to visit. I asked him how old it was, and he said it was his mothers (my grandmothers) favorite, and it was probably older than he, in other words pre-dating 1925.
When next I visit, I hope to see it hanging on the wall he faces each day, and as such things go, it will likely bring back memories, and perhaps other emotions as well. Images tend to do this.
Of course, even in the religious milieu, an event like Advent is complicated. It is observed (including not being observed at all) in various ways even by people within the Catholic Church. A constructive observance, in my opinion, is to attempt to use the next 25 days to daily reflect on something or other in my own life. A nominally Catholic but mostly inspirational book of Daily Reflections given to me years ago by my friend Les Corey comes immediately to mind**; and very likely I can “tie in” Uncle Vince through letters this month. (It helps me to make a public declaration of intention on these things – a little more likely that I’ll follow through!)
Of course, there is, always, lots of side-chatter in this country at this season: “Black Friday” rolled out two days ago. We are a financial “bottom line” nation, I guess. Profits trump most anything else.
But, be that as it may, perhaps my essential message is that the next few weeks can be helpful simply for quieting ones-self and reflecting on a more simple way of being, such as greeted that icon when it was first hung in that simple North Dakota farm home perhaps even more than 100 years ago.
Have a good Advent.
* – A few hours ago, we experienced a good positive start to Advent. After a party for three of our grandkids who have November birthdays, we all went to a Minnesota based project called Feed My Starving Children where, along with 115 others adults and children, we filled food packets whose ultimate destination is Liberia. It was our first time participating with this activity, and it was a very positive activity. Hard work, but a great family activity. Check it, or something similar, out. Special thanks to one of the birthday kids, 8-year old Lucy, who apparently suggested the activity. 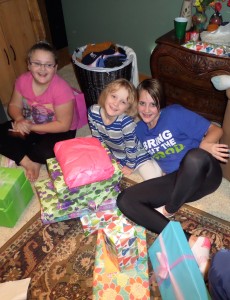 #962 – Anne Dunn: I Have Been Told: The Thanksgiving Day Myth #964 – Dick Bernard: Thanksgiving? The implications of Ferguson MO
Scroll to top