This will be one of a series which all begin “Thanksgiving?”
Thanksgiving for me was at a nursing home in North Dakota, with my last remaining relative from my Mom or Dad’s generation – her brother. His health is such that he’s confined to a wheelchair and is on oxygen, and while he is very sharp mentally, in relative terms, he’s in the Peace Garden Suite – the place where people with Alzheimers and the like live. He has no short term memory to speak of.
Lately, joining him in his unit have been an attorney with a long history and strong positive reputation in the town; and another man, an excellent musician, who until recent months was living in the Assisted Living portion of the Nursing Home complex.
Such is life for all of us. Here today, then gone. We can pretend that we’ll beat death, but however we beat the odds, some day it certainly will catch up to us, as it has, already, with one-fourth of my cousins.
But that isn’t what has me up at 4 in the morning on this day.
More, I’m thinking about the national insanity facing us: the aftermath of Ferguson MO.
Ferguson MO is todays Selma, Alabama, 1965, and I wonder what we’ll do about it, as a society.
None of us are expert on this case, certainly not I.
But enroute home from North Dakota last Friday I kept thinking of the “Un-indicted Co-conspirators” in the case. There were three of them, to my way of thinking: Michael Brown, teenager, unarmed, who’ll never be able to speak for himself, dead on a Ferguson street in August; and Darren Wilson, police officer, who killed the teenager, also un-indicted, with the opportunity to prepare a perfect case before a Grand Jury. He could tell his story to the world.
Michael Brown can’t.
Just before Thanksgiving, in my Nov. 25 post, I described what possibly was going on with Michael Brown that day in August, 2014: “stupid kid action”.
This wasn’t about what happened in the street – we’ll never know for sure about that; rather about the snip of convenience store video and the cigarillos. There are only conflicting witness accounts of what happened in the street. Wilson had plenty of opportunity to defend himself, but Brown never had that chance, dead with six bullets striking him.
I’ve known plenty of “stupid kid” situations in my life. Any of us who are honest would admit to our own “stupid kid” actions in our own pasts. Somehow we lived past them; stuff we didn’t tell our parents about…that, likely, they don’t want to know.
Overnight I thought of one scenario similar to the street scene in Ferguson MO. It involved one Byron Smith in Little Falls MN, who shot and killed two local teenagers who were up to no-good in his home; in fact, they had a history. All of the actors in the Little Falls scenario were white, and Smith was indicted, tried and convicted, and is now serving a life sentence.
Above, I mention three un-indicted co-conspirators.
The third: the sacred Gun*, most always the accessory to the crime of killing someone in our society.
I struggle with how to personally stay engaged with both of the issues Ferguson again identifies: active racism in our society; and insane reverence for the Gun.
Without the Gun placed in action by Officer Wilson, no one would have been dead, and “Ferguson” would not now be a household name.
This is far beyond a simple Second Amendment issue (“A well regulated Militia, being necessary to the security of a free State, the right of the people to keep and bear Arms, shall not be infringed.”)
We have embraced violence by weapons in this country. We are the lesser for this.
* POSTNOTE: This is no anti-gun rant. If somebody likes to hunt, the gun has its place. The Uncle referred to above still has six common weapons, safely stored. They were valued by him – very much a part of his life on the farm, always for hunting.
I brought along several albums Vince had kept over the years, and he became particularly animate about three photos like the following:
(click to enlarge) 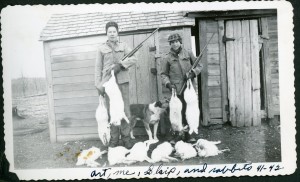 Vincent and Art with the catch of Jackrabbits sometime in 1941-42. At the time, jackrabbits were numerous and a nuisance. He had similar photos with skunk, and ducks, etc.