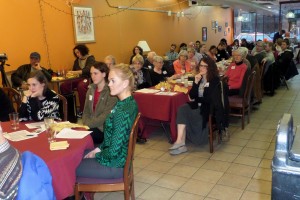 It was about 6 p.m. on Thursday, about the time scheduled for people to gather at Gandhi Mahal for a meal at about 6:45, and a World Law Day program featuring a panel of young people scheduled for 7:15, speaking to elders about the following question: “How do you and the young persons you know see global relationships and interdependence at this stage in your life and what are your hopes for the future of the planet?” (Here are brief bios of the panel members and facilitator: World Law Day bios) 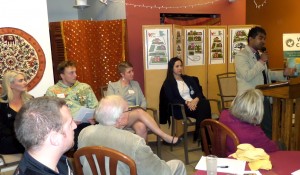 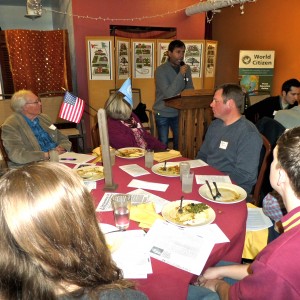 Ehtasham Anwar facilitated May 1 panel, and gave a very interesting history of May Day, here and around the world.

My RSVP list showed about 35 or so persons in my general age-range, a reasonable number for such an affair, and while I knew the event had been advertised on Facebook, I didn’t really grasp what was ahead when the first solitary young woman, college-age looking, walked across the street to our meeting room about 6 p.m.
Then a minor flood began: more than twice as many people as we anticipated, almost all of them in the high school and college age range, the room crowded by 6:30. More than two hours later, long after dinner and the panel had concluded, there was still an electric buzz in the air, the kind of feeling you get when something has really worked.
People connecting with each other.
The ones who can best tell the story of what happened May 1 are the ones who were actually in the room; and hopefully they will ‘tell’ it by sponsoring a similar experience for another group where they live. And continue the process, on, and on, and on.
One persons comment, in an e-mail when she got home: “What a great event tonight!! It was packed, including so many youth!!! All of the panelists were passionate and insightful!”. (Her son is in college, somewhere.)
There are times things come together, and Thursday evening at Gandhi Mahal seemed to be one of those times. I gave volunteer and expert facilitator Ehtasham Anwar, Fulbright/Hubert Humphrey Fellow for Law and Human Rights from Pakistan, a ride home after the program, and he asked how this event came together. I had organized it, but I couldn’t give an easy answer. It defies simple definition; on the other hand it was exceedingly simple: make it possible for the next generation to do the program; feed them; and be willing to listen actively, and learn. Here’s the program (which was modified on the run): World Law Day Prog 14001
Long and short, two days later, I would say this: truly value the opinion of young people, and publicize and do the event on their terms, and there will be a success.
This simple request is a long, long stretch for we gray-hairs, accustomed to controlling in one way or another the youngers with all the sorts of “powers”* we all too easily recognize (and fail to acknowledge)…and are reluctant to give up. But it is important to remember that the youth are the ones who are about to run things, and in fact they are comfortably occupying an alternative universe from we elders already, concerned about their own futures; using their own powerful means of communication.
A Panelist said most kids don’t even do Facebook anymore – that’s their parents medium. We Twitter…. That’s just a start.
At the same time, I noted that a Facebook event page started by one of the panel yielded more results in three days, than my old ways reservations system to old-timers had yielded in a month.
Time to catch up.
I consider a good evening one with at least one “aha” moment. May 1 there were several…. Thank you, panel and facilitator!
POSTNOTE:
The following day, Friday, I was privileged to help out at panelist Tea Rozman-Clark’s Green Card Voices booth at the annual Festival of Nations in St. Paul. There were many visitors there. 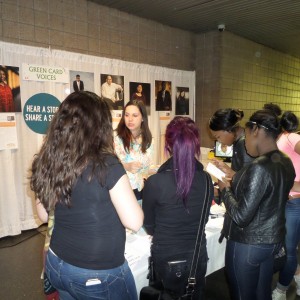 Tea Rozman-Clark in the Green Card Voices Booth at Festival of Nations May 2, 1014

Today, Ehtasham Anwar, Lynn Elling and myself, plus hundreds of others bade farewell to Peacemaker, Minister, Father, Grandfather, Leader and Friend extraordinaire, Rev. Lyle T. Christianson, 87. Lyle Christianson 5-3-14001
Lyle had introduced speaker former President of the American Bar Association, David Brink, at the 2013 World Law Day one year earlier in the same room at Gandhi Mahal.
It had only been a year.
I feel the future with the young people in charge is in good hands.
Here’s the last photo I have of Lyle Christianson, with his daughter Janet Johnson, at the Nobel Peace Prize Festival March 8, 2013. The kind of man he was shows in this photo. 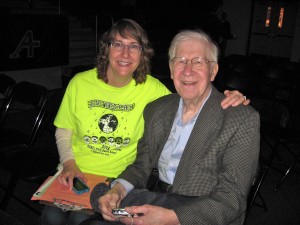