Pre-Note, Dick Bernard: Today is Law Day in the United States, a tradition begun in 1958 with President Eisenhower, still part of U.S. Law, now little known or remembered.
Beginning in 1964 Minneapolis businessmen Stan Platt and Lynn Elling set about developing a new tradition called World Law Day which went on for many years.
The following contribution seems appropriate for this years World Law Day.
There are 193 countries in the United Nations. Bangladesh, an Iowa-size country halfways, around the world from Minnesota, with a population more than half that of the United States, is one of those countries. Indeed, then as part of British India, it was one of the original 50 signers of the United Nations Charter in 1945.
Ruhel Islam, who operates the deservedly popular GandhiMahal Restaurant in Minneapolis, is always about peace. So, when he sent a recent detailed e-mail from his cousin, former Bangladeshi diplomat M. Fahimul Islam, about democracy problems in his native Bangladesh, I paid attention. Rather than interpret his words, and those of his cousin, they are here presented as written.
But first, Bangladesh.
It was, long ago, East Pakistan, part of the British Empire on which, at one time, the sun was said to never set. It is seldom in the news, and my first need was to find it on the map. Here’s from the 1987 Readers Digest World Atlas, the clearest rendition I could find here at home:
(click to enlarge) 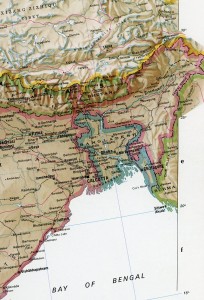