PRE-NOTE to this post from Dick Bernard at end of this post.
The two 25 minute videos referred to by Mr. Anwar in his last paragraph can be accessed at his Facebook page, here. See Dreamworld section.
Personally, this is the most important project I feel I have ever been involved in. My hope is that you watch the videos, and then enter into discussion about what they mean in context with your own life, the United States, and of our planet Earth.
(click to enlarge) 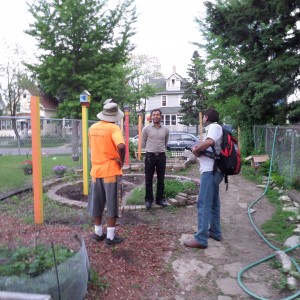 Ehtasham Anwar
Through the eyes of media, rightly or wrongly, I had always seen the United States as an aggressive country, a war monger nation, and the biggest obstacle to my dream of a dream world—a world free of hunger, disease and war.
I also believed the US citizens were too mired in their own worldly pursuits that they did not have time to attend to what the US government was doing elsewhere in the world in their name and with their tax money. They either endorsed or, at best, remained indifferent to the US aggression and highhandedness abroad. Their heart, if at all it was, did not beat for the humanity at large. They were thus equally to be blamed for the death and misery that their government brought to people in many parts of the world every now and then.
And then I got an opportunity to travel to the United States and live among, and interact with, the citizenry. Myths were shattered. Concepts were changed. I met some of the best persons in my life in the United States. They were as humane, if not more, as anyone else on the globe. Overwhelming majority disapproved war. They too felt disturbed over the US hegemonic designs. They too worked for the cause of peace. They too wanted a world full of happiness and joy, not only for them but for others too.
Where then was the disconnect? My confusion compounded. With so many good people, why was there no impact seen on the US policies? Was the church and the clergy playing its due role? Those who were working for peace failed to inspire their own families, how could they expect to impact the US policies? What were the obstacles? Way forward? Messages?
My quest led me to a journey—a journey through the hearts and minds of the common Americans. During my nearly a year-long stay in Minnesota, I talked to people from all cross sections of the society: those who had given their lives to the cause of peace; those who had taken part in, and personally seen the horrors of, the World War II and the Vietnam War; those who had participated in the civil rights movement; those who were well off; those who belonged to less privileged segments of the society; those who were the academicians, and had been keeping an eye on, peace and related issues all around the world; those who claimed to have belonged to the inner circles of the US security establishment; those who spoke from the pulpit; those who used arts as a weapon for peace; the men; the women; the young; the old; the rich; the poor; the white; the people of color.
Not all of my questions were satisfactorily answered, yet, at least, I got a clue to what they were thinking. I decided to compile all my work—the interviews—in the form of a video ‘Peacemakers of Minnesota’, with three aims in mind: Firstly, to pay tribute to those who had virtually given their lives to the cause of peace; secondly, to archive their thoughts and achievements for the posterity; and finally, to help those who would want to work for peace by equipping them with greater insight into the thought process of the citizens of the sole superpower of the world for the key to global peace lies with the US citizens.
Wish me, and them, a very good luck. 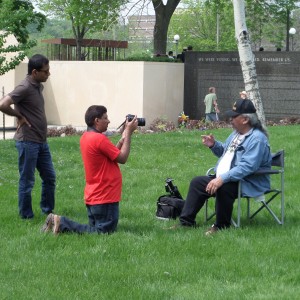 PRE-NOTE Dick Bernard
In April, 2014, Kristi Rudelius-Palmer, of the Human Rights Center at the University of Minnesota Law School,asked if I would assist a Fulbright/Humphrey Scholar in finding Americans who might be willing to talk about the quest for peace.
Thus, I had the great privilege of meeting Ehtasham Anwar, already an accomplished high level civil administrator in a large city in his home country of Pakistan. He was soon to return to his country after a year in Minnesota.
Ehtasham had a simple goal: to interview ten Americans interested in peace, and then to assemble a report on what he had heard.
We quickly “clicked”.
I set about acquainting Ehtasham with the Twin Cities Peace Community; and ten people were found who agreed to be interviewed. My priority was to identify elders for obvious reasons; sadly, the first person Ehtasham “met”, by attending his funeral, was Rev. Lyle Christianson. The two of them would certainly have clicked as well. I was aware that the time clock was clicking. A lady, high on my list of candidates for interview was too ill to meet with us….
Through very fortunate circumstance, Ehtasham’s Pakistan colleague, Suhail Abro, had a video camera, and agreed to assist in filming each approximately 45 minute interview; each person asked to respond to about ten questions. None of us had ever done such a video process before. As you will note, Ehtasham and Suhail did a marvelous job.
In the end, I expected to have film of the ten interviews for an archival project for the Minnesota Alliance of Peacemakers, a group of which I have long been a member, this year celebrating its 20th anniversary.
Not only did the interviews on film appear, but Ehtasham edited the hours of individual interviews into a well-made 50 minute video (which appears in two 25-minute parts at his Facebook page).
Those interviewed, primarily elders in working for peace, are as follows: Dr. Joseph Schwartzberg, Lynn Elling, John Noltner, Mary Rose Goetz, Don Christensen, Tom White, Mary Morris, Dick Bernard, Coleen Rowley, and Melvin Giles. Given more time, we could have interviewed many more people.
A second powerful film from the same project was at the 2014 Veterans for Peace annual Memorial Day observance on the Minnesota State Capitol grounds.
Ehtashams intention, and mine, is that the films be viewed broadly and both become a resource for replication through other interviews, and especially for discussion.
I learned a great deal from Ehtasham and Suhail in my time with them, and I keep in touch with Ehtasham to this day.
For those with questions about things such as process: dick_bernardATmsnDOTcom.
https://thoughtstowardsabetterworld.org/wp-content/uploads/2022/04/thoughts-300x138-1.jpg 0 0 dickbernard https://thoughtstowardsabetterworld.org/wp-content/uploads/2022/04/thoughts-300x138-1.jpg dickbernard2015-10-26 02:48:332015-10-26 02:48:33#1076 – Ehtasham Anwar: Seeking an answer to a disconnect: Americans as Peaceful People; and America's International Image as Warmonger.

#879 – Dick Bernard: Beginning the Future; Passing the Torch to a New Generation.
0 replies