UPDATE: Yesterday my friend Jane Stillwater reported on a recent short visit to the same area I visited in 2003. You can read her comments, and see some photos, here. 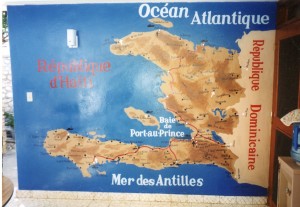 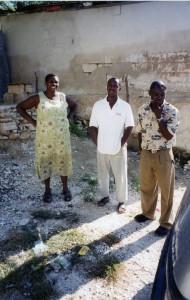 Back in the spring of 2002 my new friend, Paul Miller, began to lobby me to join him on a trip to Haiti. He’d been there several times, and while I knew where Haiti was, and that it was a very poor country, that was about it.
Paul kept working on me, and during most of 2003 we read and talked about Haiti, and on Dec. 6, 2003, we landed in Port-au-Prince for an astonishing and eye-opening week [Basic itinerary at end of this post]. I wrote here about that experience on the 10 year anniversary.
We had a full and extraordinarily rich week, ending December 13, 2003. At the end of December, 2003, I reflected on my experience in Haiti.
Our associations that week were with people who supported then President Aristide, and were attempting, successfully, to make positive changes in the lives of the poor. We knew Haiti as one of the poorest countries in the western hemisphere and the world; nonetheless we saw hope and pride as Haiti prepared for the bicentennial of its achieving independence from France in 1804.
A few photos from that amazing trip floated to the top of my collection when looking for symbols of Haiti in December, 2003:
(click to enlarge) 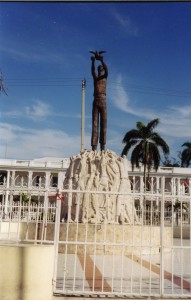 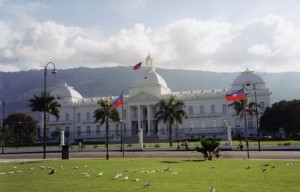 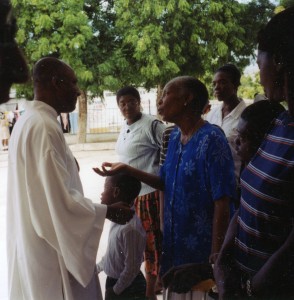 There are many more photos, of places and people, all conveying pride and even optimism. Nobody expected the end of poverty, but there was discernible pride and optimism, amongst the poor, to at minimum be working towards poverty with dignity; the more real possibility of they and their children becoming literate; and of being recognized as free citizens who could and did democratically elect their President and other officials, etc.
At the end of our week, we stayed the last night at the Hotel Oloffson, made famous in Graham Greene’s novel, “The Comedians”. We sat in the bar listening to RAM, the band of Richard A. Morse. It was in itself a powerful evening. You could almost feel the increasingly intense political intrigue in the bar and on the veranda. 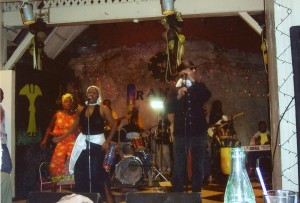 The next day we left, flying to Miami, picking up the Miami Herald story about storm clouds gathering in Haiti: Miami Herald 121303001.
The building storm was, of course, a fact known to us.
While we viewed the common folks going about their lives, we were hearing from the rich assortment of people we met with about the storm clouds gathering which, less than three months later, would end with the democratically elected President of Haiti, Jean-Bertrand Aristide, being flown out of his country by U.S. aircraft, victim of a U.S. sponsored and supported coup d’etat.
“Freedom” and “Democracy” in Haiti were too much a threat to be allowed by the United States of America.
It was a harsh lesson for me, then and now: my own country could do this to not a dictator, but a democratically elected President of an independent country.
The coup happened officially on Feb. 29, 2004, denying even the ability to commemorate an anniversary at its 10th year, 2014.
Back home, as the coup happened, and the stories abounded, I tried to make sense of what I had witnessed, trying to find some facts among the sea of fictions that flowed, especially, from my own United States government.
In March, 2006, I took another trip back to Haiti. In the time period before I left, I condensed my concerns into a letter to the leaders of three major political influence entities in the United States, and even submitted a proposed op ed to the New York Times (not printed). For those interested, my thoughts remain on line here.
Life has moved on, and my several feet of files relating to Haiti have lain undisturbed for several years.
But this anniversary brings the memories back, and the lesson learned is to be less than trusting of “truth” conveyed through official or even news sources.
A healthy skepticism is deserved.
I was last to Haiti since 2006, but still keep in touch.
Keep seeing Haiti. 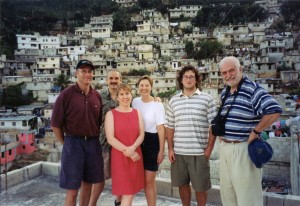 The travelers above Petion-Ville, December, 2003. Leader Paul Miller is at left.

The General Itinerary as I recall it:
Stayed at Visitation House
The entire week was jam-packed.
We saw many of the places in the booklet Chemen Kwa Pep Ayisyen, in English, here: Haiti Stations of Cross001
Sunday, Dec 7, Mass at Ste Claire’s, Fr. Gerard Jean-Juste
During the week, some specifics:
Driving tour of sights in the Port-au-Prince area
Dinner at home of our driver above Petion-Ville in Mont Calvare area.
Morning and lunch at BAI, advocacy group for victims of violence, primarily women
Visit Fonkoze, then beginning to mature into the major micro-finance organization it is today.
Visit Methodist Church under construction
Lunch at one of higher-end hotels above Port-au-Prince
Visit Hospice St Joseph
Visit SOPUDEP School Petion-ville
Visit the national television station/studio
Visit Fr Michael Graves at Orthodox Church
Visit President Aristide’s international press liaison
Visit Methodist Church Guest House
Visit Orphanage some distant into the countryside around Port-au-Prince
Overnight at Olaffson Hotel
COMMENTS
from Peter B, Mar 1 (in 2003, this would have been Feb 29, the day of the coup):

In case you still want to put something in there about this:
The evening of the Haiti Coup I got on the phone with the State Department’s “Haiti Desk” and spent at least thirty minutes talking with a guy who was of course parroting the party line written by the Noriega character (not the Panamanian drug king, the State man in charge of the Caribbean)). I tried my best to explain that everybody knew (everybody who looked beyond the Washington Post and the New York Times that is, and could spell Haiti) that the thugs on the border in the DR were about to slam into Haiti, murdering, raping and pillaging, freeing the Duvalier Tonton Macoute killer police to add to the rampage, and destroying a functioning democracy.
He was polite and uncaring through out. I was not hurried off the line. I still can’t figure out how the single phone line to State about Haiti could be tied up by a citizen for that long in the midst of a very big military operation to capture a head of state and deport or kill him. But that’s how it was.
And of course my fears were fully realized, far worse than I ever imagined at the time.
I now understand that the cultural rules of “Market Rule” require that no successful alternative economy be allowed to function, let alone achieve a reasonable life for the citizens of any country. I now understand that the punishment meted out by Washington will be destruction, chaos and unimaginable slaughter. There is no place I am aware of today that is not subject to this other than (perhaps) Russia, which as an oligarchy, plays the game quite satisfactorily with the “Western Powers.”
I further understand that we don’t have a vote that counts on this. And that our elected officials are helpless to change it, because they are immediately drummed out of the halls of government, and if they won’t shut up, they find themselves standing next to a spouse at a news conference apologizing for human trafficking.
We’ve seen it all before. We might possibly escape total enslavement, but probably because the environment will drop on the population first, and we will be once again reduced to roving bands of hunter-gatherers.
Gloomy? So what? Show me some evidence to the contrary. Hunker down. Gonna be a long hard one. The old folks hereabouts say they never have seen weather like this. When Vermonters complain about the weather you know something is up.
https://thoughtstowardsabetterworld.org/wp-content/uploads/2022/04/thoughts-300x138-1.jpg 0 0 dickbernard https://thoughtstowardsabetterworld.org/wp-content/uploads/2022/04/thoughts-300x138-1.jpg dickbernard2014-02-28 07:21:582014-02-28 07:21:58#851 – Dick Bernard: Haiti, remembering a December, 2003, visit to Port-au-Prince, and the time before the overthrow of the Jean-Bertrand Aristide government February 29, 2004.