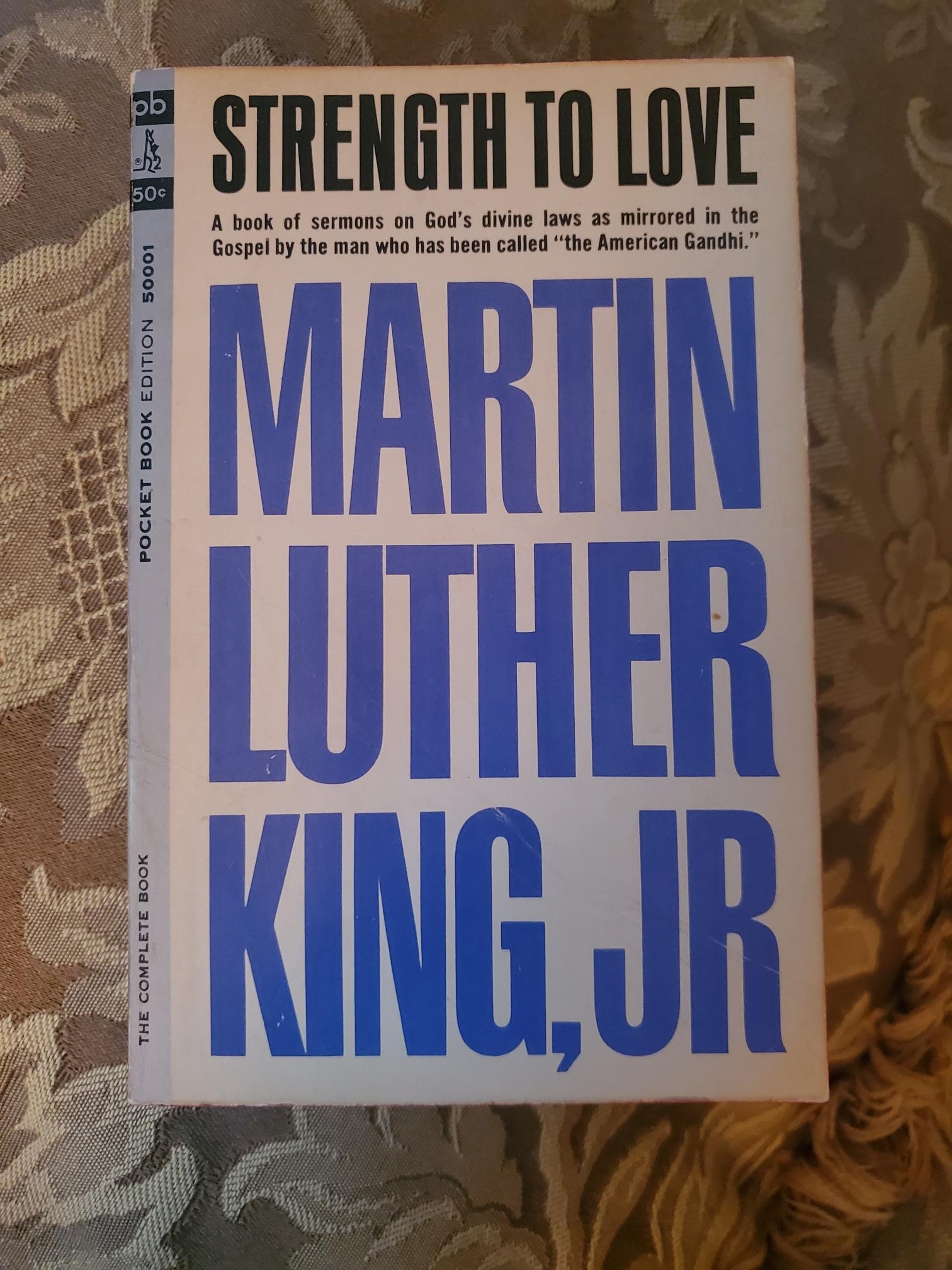 My brief post on Monday (here) brought eight comments, all well worth revisiting.

Among them was a note from Sonya: “I have been reading Strength To Love, a book of Martin Luther King’s sermons published in May 1964. Its pages are now dog-eared and full of underlined sections that I thought especially profound. I would love to have heard him speak in person.”

I replied to her comment at the blog, and sent a photo of my photo-copied volume from the April 1968 edition.  (See my note at end of this post, below the photo.)

The photos lead and end this post.   (You will notice that Sonya’s book cost 50 cents and the one I copied, 75 cents.)   I think the book is out of print, but you can still get used copies.  Thanks to Sonya, I am rereading the book, one chapter a day (17 chapters, 175 pages).  Each chapter is filled with food for thought, wherever you are on your personal journey, regardless of your personal religious beliefs.  The book was published when MLK was in his mid 30s….

I began this adventure of blogging more than 21 years ago, late September, 2001.  It started in late Sep 2001 as “P&J” (Peace and Justice), dealing with Sep 11 2001; thence became “Venturing” for a short while; thence “Outside the Walls”, thence the present “Thoughts Towards a Better World”.    It has been a personal opportunity to clarify my own understanding of issues, and to learn from others.  Some readers have been with me for the long haul.  We’ve covered lots of ground.

J. Drake Hamilton of Fresh Energy gave a very interesting talk on Zoom last night, Jan 19.  You can watch it here.  “Climate Loss and Damage at COP 27“.  The talk is 30 minutes, with an additional hour discussion of audience questions.  I predict you will be glad you watched it, and share it.  I am a long-time active member of the sponsoring organization, Citizens for Global Solutions MN, and an active supporter of Fresh Energy and its work.

Ukraine: A couple of days ago, Fred sent along a link to a very informative commentary on the historical background of Ukraine/Russia: “A truly masterful analysis on the war in Ukraine. This is from [Fiona] Hill’s talk in ceremonies marking the BBC’s centenary. An aside: The role and influence of the BBC in Europe, 1922 to 1970s, particularly, is vastly underestimated. Hill is a highly regarded British-American foreign affairs expert, with special interest in Russia.”

Native Americans: Back on Jan. 1, 2023, Brian commented on the New Year’s post on some work he’s done with native Americans and their Credit Unions. (Brian works out of NYC.  He and I met on a study trip to Haiti in 2006).  I think his comment fits here, and it is shared with his permission I have added some links: Oh, and the Dakotas/Montana and Native Americans.  I have good news.  After 5 years and several trips out to Lame Deer with my working with them, the Native Americans (Northern Cheyenne and Crow) now have a credit union of their own–it was just chartered.   And the Lakota credit union, which I worked with 10 years ago on the Pine Ridge Reservation, really helped out, too.   And they just expanded their service to eastern SD, to the  Rosebud Reservation–I had to get involved with that, the regulators were such asses.

Cuba:  The Golden Rule Boat made a trip to Cuba in early January, and Thursday came their observations, along with this ‘clip’: “Without U.S. hostility to an independent, socialist Cuba, we would not have come so close to nuclear war in 1962. There are a lot of lessons to learn from the Cuban Missile Crisis. But have they been learned?“.

Population, climate etc:  Occasionally side conversations start out of some post here, and recently Chuck and Claude entered into a good-natured back-and-forth about the future.  Along with their exchange of opinions, came a couple of videos by persons I would categorize as ‘futurists’ (which is a compliment) – attempting to predict the future.  If you wish, here are the videos, worth your time.  From one of the corresponding duo: “Here’s a [30 minute] video of optimism if you dare watch it.”  From the other: “I’m going to ask you to watch the first 44 minutes of this presentation of Dr. Rees to the Canadian Association for the Club of Rome.”

If they wish, I may do a “Chuck and Claude” post sometime later….  Constructive discussion is always good.

There is more, of course, for another day.  We tend to be dominated by the headlines of the day on whatever our choice of media might be.  In the end analysis, there is lots of action happening with lots of people on lots of issues.  Keep on, keeping on…. 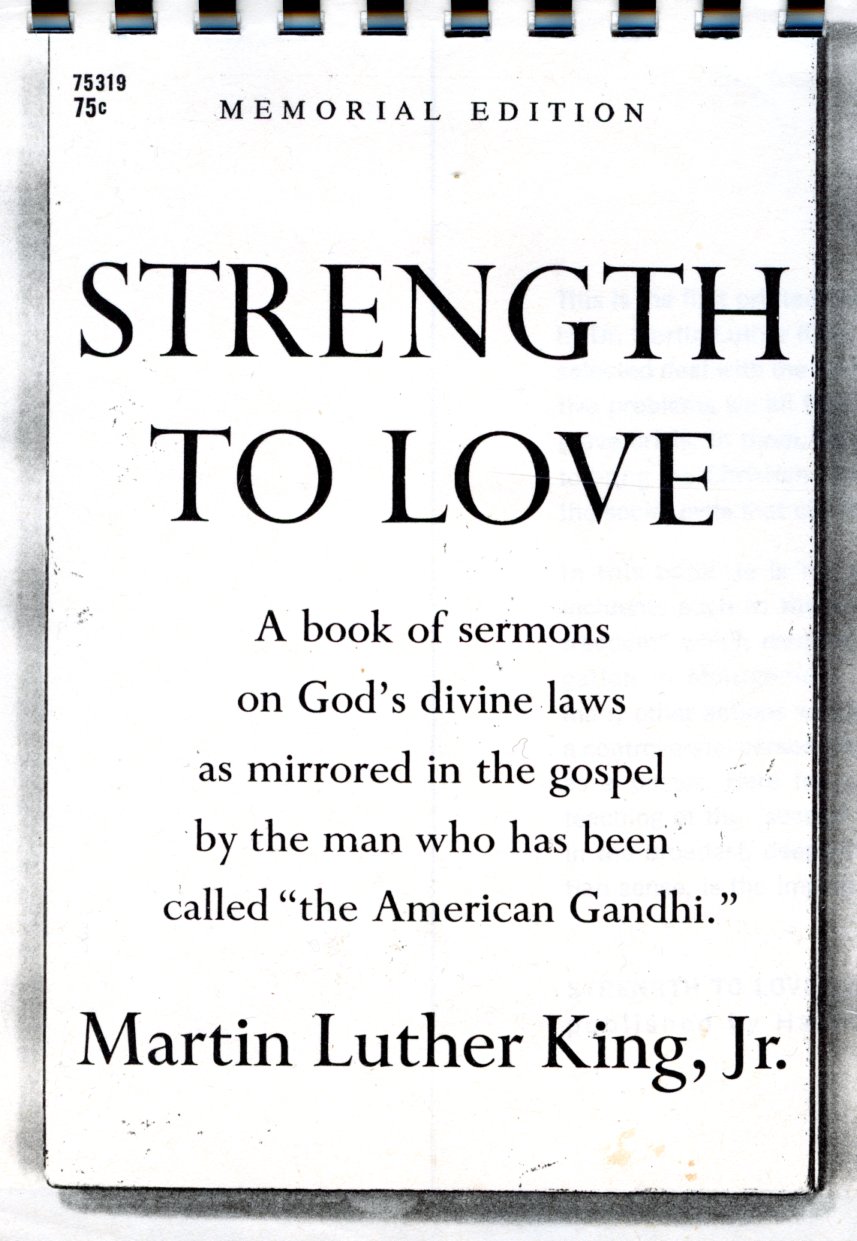 POSTNOTE:  Everything has its own story.  Sometime in the late 1980s I had occasion to visit an African-American couple in Albany GA.  I saw the “Strength to Love” paperback and asked if could borrow it, and back home I copied it.  The book appears to be out of print, but still available used.  I’m very happy I had it, and that Sonya reminded me of it.