Today is when the U.S. Congress is sworn in – a biennial ritual for, I suppose, most of the 235 or so years there has been a United States of America.  Every Congressional seat (434) is up for election every two years.  No one has been elected as Speaker after three ballots. I have no idea when this process will conclude, but neither does anyone else. POSTNOTE 4:35 p.m. Jan. 3:  Congress adjourned with no speaker elected.  Will reconvene tomorrow at noon.  New members have not yet been sworn in..  I will do a new post about governance, generally, in the near future.  Stay tuned.  I’ll title it “Government”.

I choose, today, to invite some thinking about some present day, and past, international history.

On my end of year post, Dec. 31, I referred to a saying my Dad affixed to his portable typewriter, which was on his paper placemat in the dining room at Our Lady of the Snows where he lived the last 10 years of his life.  Below is a photo of the typewriter in my garage.

All three lines of Dad’s ‘credo’ make sense.  This post is about the third: “Learn from Yesterday”.  I wonder how attentive to history we are; what we learn.

Below are two timeouts, about Ukraine and about Cuba and finally a postscript about Pele, the king of Soccer, who died recently. 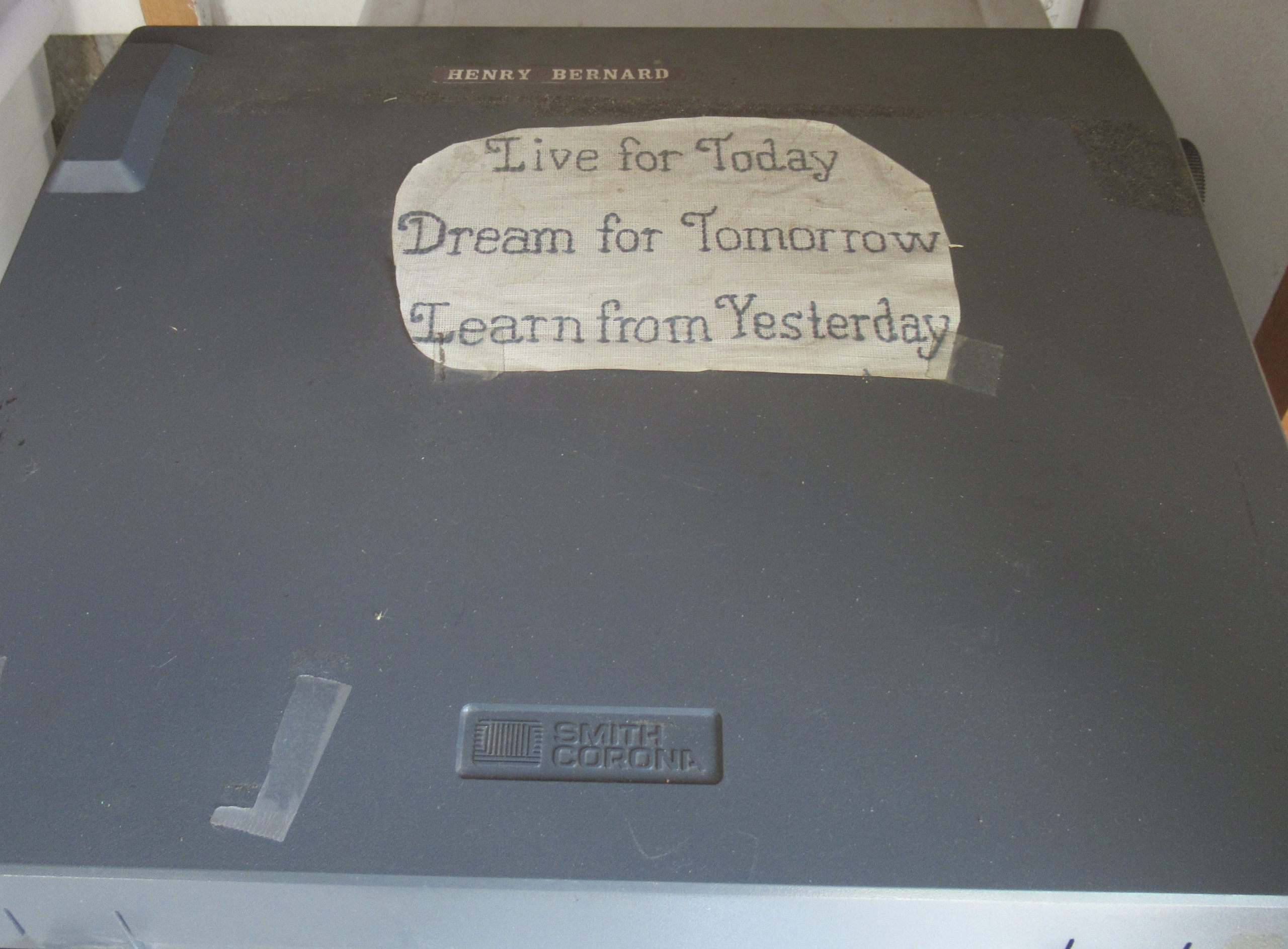 UKRAINE: The brutal invasion of Ukraine by Russia started 11 months ago, and I’ve written several times about the topic.  Just put “Ukraine” in the search box (the magnifying glass in upper right corner gets you access.)  Much to my surprise, Ukraine is mentioned in 56 posts, the first in Feb. 2014. The current posts begin in March, 2022.  I don’t have to fill in the blanks about the theories and biases and predictions…you’ve heard and thought about them yourself.

A good general account of the breakup of the Soviet Union in 1991, a precursor of the present, can be accessed here.

Most recently, in November, I heard a young woman, Natalie Etten, give an excellent talk on her country of Ukraine, and what most drew me in was her reference to Crimea – once part of Ukraine – which had very significant family history for her.  I wish I could refer you to the on-line talk, but it’s apparently not available.

All history is written (or ignored) by someone, and these days it is hard to believe much of anything said by anyone.

On our bookshelf is my 1977 edition of Encyclopedia Britannica – once a prime ‘go to’ source of credible information on most anything.  Used to be, I think, that the massive Britannica was an authoritative source of general information.  (It’s now on-line, but for now I choose to rely on the 1977 volumes.)

Yesterday I decided to look up “Crimea” in my edition, and in the very scant references picked up some history that helped give me significant context on the entirety of Asian ancient history.  Here is the single page: crimea britannica.  I think a reflective reading of those few references might help give context to that awful conflict.

I thought a lot about analogies to our own United States history…there are many similarities and there are differences.  (Kiev predates Moscow…Ukraine is ancient too.  Russia’s history is autocracy, etc.)

CUBA: Somewhat similarly, the sailboat, the Golden Rule, is spending a few days in Cuba, a country which has been on the U.S. bad list since the revolution of 1959, 63 years ago.

A few days ago, Dec. 22, I devoted much of a post entitled “Ukraine and more”  to Cuba, and the Golden Rule.  (The Cuba space contains a link, which includes a full chapter of a 1963 college Latin American history textbook on Cuba history which you’ll find included in the 2016 post here.).  The chapter is worth reading.  Take a look, at your leisure.

As noted, it is 63 years since 1959.  Cuba remains a quandary for the U.S.  Today, some see Ukraine as a quandary too.  They are both tragedies, examples of the imperfect reality of human, national and international relationships.

Personally, we have to actively support Ukraine; and the continuing animus towards Cuba makes absolutely no sense.

Have we learned anything from yesterday?

We – all of us – are the Congress we complain about….

POSTNOTE: Soccer star, Pele, died Dec 29 in Brazil.  He was my age.

My walk every day, including today, is around an indoor soccer field.  That is as close to soccer as I have ever come, but one time, in the summer of 1976, I had the opportunity to see Pele play soccer at the old Met Stadium in Bloomington MN.  For anyone with an interest, here is that game as televised.

Back then, soccer was just getting a foothold.  In Minnesota, the stadium was packed.  But my recollection is that it became more an occasion for raucous tailgate parties than the sport itself.  Soccer didn’t last long in its first run.  It has come back.

I’m not and never have been a tailgate party type.  I went to see Pele, and that was all.  He was a great athlete and apparently an all-around star.