A few mornings ago a friend at a neighboring table asked “out of the blue”, “so, are you going to Cuba?”
This was a head-scratcher. At the time, I hadn’t learned that Fidel Castro had just died in Cuba. At any rate, while I have an interest in Cuba, generally, my life doesn’t revolve around it or its politics. But no question, the Revolution in Cuba in 1959 has certainly impacted American politics for many years, and it long pre-dates the Castro brothers and Che Guevara…and they were not the villains.
My major “brush” with Cuba came in an Infantry barracks at Ft. Carson CO in late October, 1962. We GI’s were alerted that President Kennedy would be speaking to the citizens in the evening. A few of us gathered around the 9″ television owned by the Mess Sergeant, and watched the Presidents speech. Outside our barracks, perhaps a half dozen miles to the west, was Cheyenne Mountain, then and still the headquarters of NORAD* and, we were advised, one of many Colorado targets within range of the Soviet missiles being taken to Cuba.
The next morning, Tuesday, October 23, Denver’s Rocky Mountain News filled in the blanks, as known. Many years later I spent the time in a Denver library to find the specific issue that came to our Company office that morning. Here are a few pages: cuba002.
Here is part of page one:
(click to enlarge) 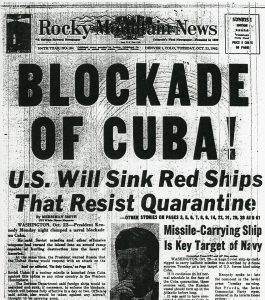 The rest of the story is anti-climactic. By the time Pres. Kennedy spoke to us, the crisis was nearly over. Extraordinarily tense diplomacy saved the day. Other than a few days of putting up with more intensive preparation, life went on as normal at the base.
And for the 54 years since then, Cuba has been a constant enemy, and Fidel Castro outlasted 11 U.S. Presidents.
Actually, Cuba is a fascinating place, and deserves much more of a fair shake than it has gotten these last many years.
Out at the ND family farm I found a “History of Latin America” published about the time of 1959 coup. In the chapter on Cuba, the final paragraph says this: “Reflecting on the sorry state of Cuba in 1960, the onlooker could say that two things are reasonably clear: Cuba was indeed overdue for a revolution, and revolutions are never mild and gentlemanly.” Here is the entire chapter from which that quote is taken, with apologies to the author, Hubert Herring: Cuba to 1963001.
For those interested, I have had several posts about Cuba. They can be accessed here; here; here; here; and here.
That’s more links than I thought I’d find.
Personally, I prefer we work at racheting up the friendship, rather than making sacred the enmity. The Cuban people deserve a break, too.
* – I linked, here, the Norad Santa website. It seems fitting for the season. Here is the other NORAD link.
POSTNOTE: My favorite Revolution story comes from my Dad’s cousin, Marvin, then a very prominent banker in a Minnesota city. We were visiting sometime in the 1990s. For some reason the topic of Cuba came up, and Marvin said that at the time Castro came to power he made a $5 bet with a friend that Castro wouldn’t last six months. “Guess I lost that one”, he said.

"A Matter of Honor" – the 75th anniversary of the Attack on... The 75th Anniversary of Pearl Harbor: A Sailor and his Ship, the USS Arizon...
Scroll to top