Jan 5 10 a.m. CST – There are comments coming in, but no time to add a few of them.  See the end of post for others.  They’re worth reading.  Check back later this afternoon.

We’re in the third day of paralysis in the Twin Cities of Minneapolis-St. Paul area.  Not that it’s too bad, compared to the recent catastrophe in Buffalo NY area, for instance.  But even in relatively nice winter weather, no wind, near 32 degrees, a foot of snow is a foot of snow – pretty to look at, but for most of us, old-timers in particular, paralysis.  (Our neighbor across the street opened her window for a brief lament yesterday; her mother had a stroke about the time the snow began; her dad was home alone (and doing okay); but she and family couldn’t get to the hospital to see their Mom.  I’n certain there are many similar stories.)

This was the kind of day it was.  We’re due to go to the Orchestra later this morning, if the long driveway is open…stay tuned on that.  Snow removal is one of those businesses where it’s ‘feast or famine’.  We’re not the only driveway in this town of over 3 million….

The paper guy did make it, this morning: 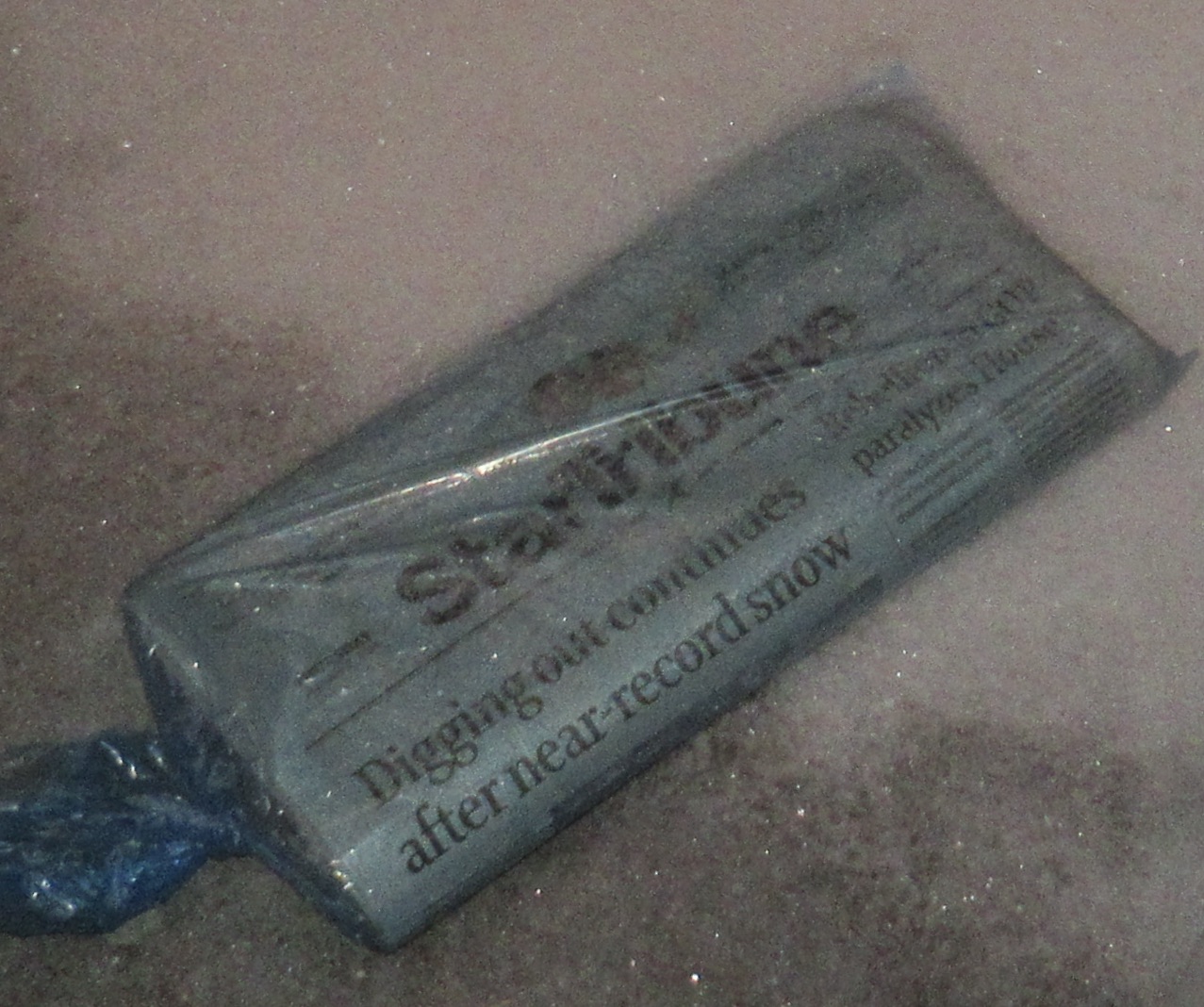 Two headlines ‘above the fold’ in today’s paper: the first one is easily read.  The second “Rebellion in GOP paralyzes House“.

It happens that the days of the big snow coincided with the still unfinished process to select a Speaker of the House of Representatives, the third most powerful government official in the United States of America.  The last to ascend to President from Speaker of the House was Gerald R. Ford, then speaker, who became vice-president after Spiro Agnew resigned, then president after Richard Nixon resigned in 1974….

I suppose my interest in watching two days of a political gang fight makes me a political junkie.  So be it.  We, the people, elected all 434 of the combatants, and we, the people, will be stuck with the results of what we’re witnessing in Washington D.C.

For those who didn’t watch, or don’t know the rules, the House elects its own Speaker, who is always (but doesn’t have to be) a member of the House.

There are two main political parties in our country; the majority party ordinarily selects someone of its own to lead.  The Speaker has an immense amount of procedural power.  The founders built a three-legged stool at the beginning of the U.S.: President, House of Representatives, Senate, moderated by a Supreme Court.

Generally, the process has mostly worked reasonably well.  It has always been subject to manipulation; in these fevered days, it can seem out of sight.

In the first six ballots Tuesday and Wednesday, the largest vote getter was the Democrat Hakeem Jeffries of New York; but the winner needs to get one more than half of the total House membership of 434 – 218 votes, spoken in person by each Representative.  This makes for a long time period.

Each time Jeffries received 212 votes.  On the last vote before adjournment yesterday, challenger Kevin McCarthy had 201 votes; someone I’d never heard of, had 20 votes, and one person voted “present”.   For all intents and purposes, there was no change, up or down.

I will spare you any prediction.  Your guess is as good as mine.  If you want the 20 to win, I suggest being very careful about what you pray for….

If all of this is not too confusing, enter the fact that the House of Representatives does not officially exist at this moment.  The temporary chair is a clerk, along with other clerks attempting to keep order among a group of prima donnas.

My understanding, the new Congress will not exist until the members are sworn in, which will not happen until a leader has been selected with at least 218 of the members agreeing on who that leader will be.

The goings on remind me of a somewhat civilized Jan 6, 2021.  All that is missing is the riot.

On each ballot, the candidates have to be nominated, and towards the end yesterday the nominating ‘speeches’ were clearly oriented to getting a 10 second sound bite on someone’s evening “news”.

I have my favorite ‘cheap shot’ against the Democrats from a Republican who was nominating one of her own, but I’ll spare you what she said.  No question some news media reported it as news somewhere last night.  It represented what U.S. politics has devolved to, and probably the spectacle I’m watching is a fitting end, at least for the time being.

USA Today seems to be keeping track of this food fight in suits fairly well.  Here is its reporting.

This is your United States, and mine.  Pay close attention.

MINNESOTA ORCHESTRA:  POSTNOTE 8:45 p.m. Jan. 5: I watched little of today’s business in the House of Representatives.  We had tickets to the morning concert of the Minnesota Orchestra, and it was a magnificent performance of pieces by Samuel Coleridge Taylor, Sergei Rachmaninoff and Maurice Ravel.  This concert will be broadcast live at 8 p.m. Friday on Minnesota Public Radio 99.5; on Twin Cities PBS (TPT-2) and available for streaming at minnesotaorchestra.org and on the orchestra’s social media channels.  View the program notes here pages 20-25.

from Lois: Found this, from Thomas Jefferson to Henry Lee, 10 August 1824, interesting after reading about the House Speaker voting. Here is another view on political parties.

from Chuck:  Wish we had more concerned citizens.

Here’s my spin on listening to the first day of the new Congress.

On Jan 3, 2023, the first day of the new 118th Congress, the needed quorumof the House of Representatives started the day with a prayer and the pledge of alliance.

Highlights of the Chaplain’s prayer the new congress heard:  “ETERNAL GOD, YOU SPOKE AND THE EARTH BROUGHT FORTH LIFE. WITH A WORD YOUR SPIRIT BREATHED INTO HUMANITY THE ESSENCE AND PURPOSE OF OUR VERY BEING. … BREATHE INTO THE BODY OF THE 118th CONGRESS YOUR WORD OF TRUTH AND JUSTICE, COMPASSION AND WISDOM. GIVE EACH MEMBER THE GUIDANCE TO BE FAITHFUL STEWARDS OF THIS DIVINE TASKING AND TO WIELD THIS PRIVILEGE CAREFULLY. … REMIND US THAT AMIDST ALL THE DEBATE, YOU WILL ALWAYS HAVE THE FINAL WORD. …. LAY ON THE SHOULDERS OF THESE MEN AND WOMEN THE MANTLE OF BOTH RESPONSIBILITY AND ACCOUNTABILITY….  CALL THESE WHO REPRESENT THE HOPES AND DREAMS OF THE AMERICANS WHO HAVE VOTED THEM INTO OFFICE TO HEED FIRST YOUR VOICE AND THEN AS THEY UPHOLD AND DEFEND THE CONSTITUTION AND ITS MORAL PRINCIPLES, GRANT THEM STRENGTH AND REASON, PURPOSE AND INSIGHT. … GIVE US EYES TO SEE YOUR GUIDING HAND, EARS TO HEAR YOUR WISE TRUTH, AND HEARTS TO HOLD FIRMLY TO THE FAITH WE PROFESS IN YOU. WE PRAY THIS IN YOUR MOST SOVEREIGN NAME. AMEN.”

The intent of Pledge they all made:  “Liberty and Justice for all”.

What they did next:  Debated who should be elected Speaker of the House.  A vote that has only needed one round of voting for the last 100 years.  Then spend ____ days using precious time, taking ____roll call votes with no focus on any of the urgent issues facing God’s earthly creations.

If these elected officials could abide by the prayer they all heard and keep their pledge of allegiance to our nation that each made, our democratic republic would finally be on the right track.  But the first task of the new congress was to elect a new Speaker of the House.  There can only be one.  But it could be anyone.  Not even an elected member from either party.  But the republican majority is divided. The MAGAs vs the old school John McCain Republicans.  And in their inner party debate to elect Kevin McCarthy into that position was started with a truthful statement a leading republican who is opposed to McCarthy becoming chair.  He said that congress has been the last to know the truth – that our government is broken.

But their first task of the new congress was to elect a new Speaker of the House.  There can only be one.  But it could be anyone.  Not even an elected member from either party.  But the republican majority is divided. The MAGAs vs the old school John McCain Republicans.  And in their inner party debate to elect Kevin McCarthy to that position was started with a truthful statement a leading republican who is opposed to McCarthy becoming chair.  He said that congress has been the last to know the truth – that our government is broken.

But the first task of the new congress was to elect a new Speaker of the House.  There can only be one.  But it could be anyone.  Not even an elected member from either party.  But the republican majority is divided. The MAGAs vs the old school John McCain Republicans.  And in their inner party debate to elect Kevin McCarthy to that position was started with a truthful statement a leading republican who is opposed to McCarthy becoming chair.  He said that congress has been the last to know the truth – that our government is broken.

“Under democracy one party always devotes its chief energies to trying to prove that the other party is unfit to rule–and both commonly succeed, and are right.”  – H.L. Mencken

from Kathy: I am watching most all the f it too. Nancy seems relaxed and totally engaged. The 20 or so Republicans interested in obstructing.

from Len: You are a patient man.  Dems will lose again as none of the 20 will support the Democrat candidate and no matter-McCarthy or Scalise, it is bad for the Dems.

So, what can we plan on? Play the loyal opposition, plan for the election of 2024, and hope voters wake up. Recruit, educate, and organize.

Not any more a dismal outlook than 2022. In fact, it is optimistic- we get another chance.
from Candace: I highly recommend this.
from Fred: Good Blog! I’ve been watching the H of R carnival on and off but was thinking about a MN Orchestra break tonight after checking out the lineup. I can have classical music when I’m editing and doing online research but not writing. I’m partial to my fellow Scandinavian, Grieg, even though he is Norwegian. We visited his home outside Bergen during one of our trips to that region. His piano stands ready.
https://thoughtstowardsabetterworld.org/wp-content/uploads/2022/04/thoughts-300x138-1.jpg 0 0 dickbernard https://thoughtstowardsabetterworld.org/wp-content/uploads/2022/04/thoughts-300x138-1.jpg dickbernard2023-01-05 08:04:352023-01-06 11:44:45Watching