“When the people lead, the leaders will follow.”
York Langton*

I highly recommend one film among the many options: “The World is My Country“, which has its World Premiere at the St. Anthony Main theater in Minneapolis, 2:30 p.m. Sunday, April 23. In order to accommodate possible overflow crowds, the festival has scheduled three screenings. So if you want a seat at the World Premiere, get your tickets early. All necessary information is on the Festival site accessible here.

Along with the World Premiere of The World is My Country will be an eight minute short adapted from the Minnesota film: Man’s Next Giant Leap. The was made especially for this Premiere by Arthur Kanegis and his Associate Producer Melanie Bennett, who edited it mostly from a 30 minute film made back in the 1970’s. Take a look – you’ll be pretty amazed to see what our governor, mayors and other officials had to say about World Citizenship. The short can be viewed here. The Minnesota Declarations of World Citizenship can be viewed here: Minnesota Declarations002

The World is My Country is the remarkable story of up and coming ca 1940 Broadway star Garry Davis. It deserves a full house at each of its three showings. Garry Davis, then into his 90s and very engaging, tells his own life story in the film, which is richly laced with archival film from the 1940s forward. Among the many snips from history: the adoption of the Universal Declaration of Human Rightss at the United Nations, in Paris, 1948. 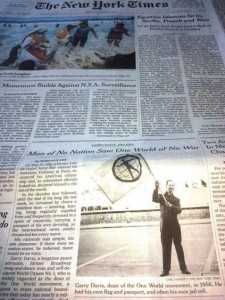 I wrote about this film on April 8, and again after its work-in-progress preview, also at the St. Anthony Main, on January 6, 2013. (See here and here.)

Garry Davis? I didn’t know he existed until his name came up at a lunch in June, 2011. Filmmaker Arthur Kanegis was in town, and a friend of his invited four of us to lunch. It was there that Garry Davis came to life for me. A WWII bomber pilot, his brother already killed in WWII, Davis couldn’t justify killing by war as a solution to problems. In 1948, he gave up something precious to him, his U.S. citizenship. He said he did it as an act of love for the United States, following in the footsteps of our founding fathers who gave up being Virginians or Marylanders to be citizens of the United States of America. He declared himself a Citizen of the World, and ignited a movement promoting world citizenship beyond even his imagination. He took a huge risk he lived with the rest of his 93-year life.

From there, I’ll let the film tell the rest of the story.

I was enrolled, that day in June, 2011, and had a small opportunity to see the dream evolve, and now return to the screen for its World Premiere in Minneapolis.

In the fall of 2012, I received permission to show an early draft of the film to a group of high school students in St. Paul. How would they react to ancient history (WWII era film and characters)? Very well, it turned out. They liked what they saw.

About 100 of us participated in Work In Progress test of the first draft of his film in Minneapolis, at St. Anthony Main, in January 2013. The reaction was positive.

Again, I asked permission to show the preview to a group of retired teachers meeting in Orlando, and they liked what they saw. And on the same trip I showed the in-progress film to the Chair and Founder of the U.S. Peace Memorial Foundation. He was very attentive and liked what he saw.

Time went on. Last summer, I attended a private showing of the film, now nearing completion. The process of making a film is tedious, I found, simply from occasional brushes with this one. To make a film is to take a big risk. Now it has earned its time “in the lights” for others to judge.

I do not hesitate to highly recommend this film, particularly to those who feel that there have to be better ways of doing relationships than raw power, threats, and the reality we all face of blowing each other up in one war after another. This is not a film about war; it is about living in peace with each other.

The key parts of the film focus on Garry Davis in his 20s and 30s, roughly the late 1940s through the 1960s. It’s an idealistic film, especially appropriate for young people, with an important place for positive idealism in todays world.

“The World is My Country” does not end with somebody dying (though the real Garry Davis died 6 months after that first preview I saw in 2013). Rather, its call is for solutions other than war or dominance.

Viewing this film is an investment, not a cost. It brings meaning to the timeless quotes of Margaret Mead – “Never doubt that a small group of thoughtful, committed citizens can change the world indeed it is the only thing that ever has”; and Gandhi – “We must be the change we wish to see in the world.”

Applications for World Passports will be available for those interested at the film.

POSTNOTE:
Here is the first, last and only e-mail I was ever privileged to receive from Garry Davis, Jan. 7, 2013. He died 6 months later. 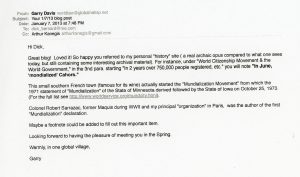 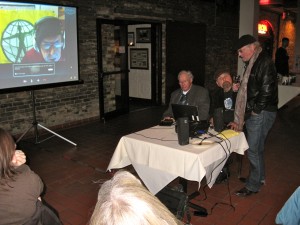 On taking risks (from a Church bulletin in Park Rapids MN 1982) (attributed to William Arthur Ward): 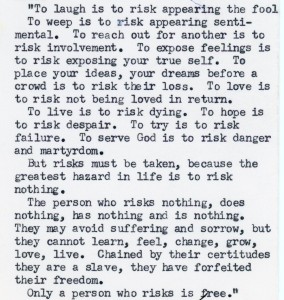 * POSTNOTE:
York Langton was a Minnesota Corporate Executive in wholesale business, and often used this quotation in talking about relationships in the 1960s.

“When the people lead, leaders will follow” is a common sense axiom in business. If people want a product, they buy it; if they don’t, they won’t. Fortunes are made by following this simple truism.

The same is true in political relationships. If people make unwise decisions in choosing their leaders at any level, they face consequences.

So, “when the people lead, leaders will follow” is an important one for all of us.