December 6-13, 2003, I made my first visit to Haiti. There were a half-dozen of us in a group led by Paul Miller. I knew little about Haiti. We spent our time in Port-au-Prince visiting assorted persons, idealists all, enthusiasts for democracy, who were allied with the cause of then-President Jean-Bertrand Aristide.
There was a sense of tension, though not worrisome, when we arrived.
Storm clouds intensified during the last days of our visit. At least one person we had met had been killed a day or two after we met him at a school; we had possibly heard the gunshots as we drove in the vicinity of the Presidential Palace.
But all in all it was a great learning week, about the Haiti and Haitians we hadn’t known before.
Towards the end I asked our host if I could get some Haitian money to take home with me, and he accommodated me with 100 newly minted Haitian 10-Gourdes notes (approx value, to my recollection, $20 or so.) Then and now these notes represent the optimism of a nation about to celebrate its bicentennial of freedom; of breaking the chains of slavery.
(click to enlarge) 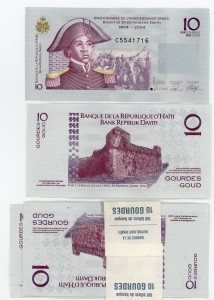 Back home, we watched those storm clouds build quickly, and early in the morning of February 29, 2004, leap day, 12 years ago today, President Aristide and family were spirited out of Haiti to the Central African Republic, very certainly the victims of a coup orchestrated by the United State Government with the active support of the French and Canadian governments as well.
People we met had fled, been imprisoned, or killed. And it was our own countries doing.
I remember hearing at the time that the timing of the coup was deliberate.
Haiti had just celebrated the bicentennial of its Declaration of Independence from France; and in this case, Feb. 29, 2004, it would be difficult to annually remember the destruction of Haiti’s experiment with democracy during the years of Aristide.
Now it’s twelve years later, and while I still have an interest in Haiti, I don’t follow it daily, as I did then.
But sometimes it is good to review the past, and to see what was gained, or lost in the time after we squelched democracy in our little neighbor just east of Florida.
For those interested, I offer a few personal and very modest attempts at the U.S.-Haiti history over the past few years.
My offerings about Haiti (all accessible here). Putting “Haiti” in the searchbox at this blog will find additional articles.
It is my hope that we always remember Haiti, still impoverished; still dominated by our government (which is, by the way, not simply a person…but rather an entire institution with a very long history of keeping Haiti as a subordinate state.
For me, back in my advocacy years for Haiti, this included a single anonymous person at the Haiti desk at the State Department; some invisible functionaries at U.S. Agency for International Development and Department of Defense; the public but very shadowy National Endowment for Democracy and its Republican and Democrat arms, etc.) Even the United Nations was complicit. Of course, the U.S. is the dominant state within the United Nations.
Haiti remains one of the poorest and by extension most oppressed countries in the world. Once in awhile it deserves a spotlight, and a look back.
My summary: Haiti is still very poor. The reflex response of Americans seems to be “it’s the Haitians problem”. It is a simple response, from my own experience, that’s not at all a merited response.
We created and we sustain what we see, there, today.
I like the phrase I heard back then, “Start Seeing Haiti”.
https://thoughtstowardsabetterworld.org/wp-content/uploads/2022/04/thoughts-300x138-1.jpg 0 0 dickbernard https://thoughtstowardsabetterworld.org/wp-content/uploads/2022/04/thoughts-300x138-1.jpg dickbernard2016-02-29 13:08:392016-02-29 13:08:39#1109 – Dick Bernard: Leap Year, Feb. 29, 2004. Haiti revisited.
0 replies