POSTNOTE: Sunday, June 21: This morning at Basilica of St. Mary, a two page handout gave q&a’s about the recent happenings in the Archdiocese of St. Paul-Minneapolis regarding the resignation of the Archbishop and one of the Auxiliary Bishops. The Priest, Ft. Greg Welch, gave his homily on today’s gospel, and as I told him afterward, he “hit a home run”. His message ended with spontaneous applause from the large congregation, and applause is very unusual at Church. Essentially, as I interpret the Priest’s message today, (and likely the reason for the applause), “The Church is the People in it. Each of us.” Here, in three pages, are the Gospel passage, and the flier distributed: Church Archbishop Change001 For those interested in the Pope’s encylical that is receiving so much attention these days, you can access it here.
*
Quite routinely, when I have a thought for a blog; I let it germinate a bit; do a draft; and if fits I complete it in my own always imperfect way.
So it was with the following three paragraphs and photo, which began June 15, 2015, with an e-mail comment from my good friend…and fellow Catholic, Jeff: “waiting for the Bernard report/comment” on the resignation of the Archbishop and one Auxiliary Bishop of the Archdiocese of St. Paul-Minneapolis; the latest chapter in alleged mishandling of sex abuse of a Priest by Archdiocesan officials. But no words came to fill the space till Thursday, and then I wrote the following, and closed the file again, till today:
*
June 18, 2015
A few days ago a good friend asked me if I had a comment about the latest turn in the scandal-plagued Archdiocese of St. Paul-Minneapolis where, that very day, the Archbishop and one of the Auxiliary Bishops had resigned.
Of course, I have thoughts and feelings, but not until today’s headlines did I find a peg on which to hang my feelings. It comes from neighbors on the front page of the Minneapolis Star Tribune: a new interim Bishop arrives in Minnesota; nine people are gunned down by a lone gunman in a church in South Carolina. Those who watch the news probably know about both of these happenings. 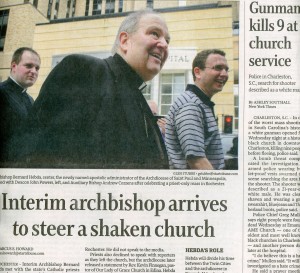 These “twins” in an odd sort of way speak to our society at large in a way we likely don’t like to consider.
*
June 20, 2015
As a lifelong Catholic, and a career long representative of teachers, including during the days when allegations of sex abuse by people in power against subordinates (i.e. teacher/student, etc) became a white hot issue (ca mid 1980s forward), I have a reasonably well informed base from which to comment, thus Jeff’s query.
But that, like the scandals, is old news, still eagerly flogged back to life when opportunities present themselves. Short story: humans are imperfect beings.
But what happened in that Church in Charleston a couple of days ago, and subsequent events there, are potentially more significant in the very long term, not only for South Carolina but for our country. But only if people get actively engaged in the essential conversations, everywhere. Without those engagements, nothing will change.
What most struck me, post massacre in the Church, was the expression of compassion and forgiveness from family and friends to the perpetrator: “I forgive you”, rather than “string him up” in lynch mob parlance.
These were people walking the talk of the real message of Christianity in their moment of great grieving.
Certainly as news of Charleston goes forward there will be calls for the death penalty, and other “eye for an eye” responses, but those folks who were at the prayer service are for me the spokespeople for living lives together; to rebuild from tragedy.
There’s also the matter of that Confederate flag, unbowed even after this horrific tragedy because it is apparently against South Carolina law to lower it.
Flags through history have rarely been benign creatures, rather they symbolize unity, usually against someone else. “Battle Flags”. “Us versus them”.
I’ve learned this lesson over time, most recently in a very unexpected way over two years ago when I learned that the United Nations flag had been taken down, almost covertly, from Hennepin County Plaza, after flying there for 44 years, in quiet company with the U.S. and Minnesota flags.
There is a story* there, a very long and continuing story, which you can read here if you wish.
For certain, watch the Confederate Flag debate as it evolves in South Carolina.
And watch the narrative as it evolves about punishment, “us” v “them” and the like.
We all can learn something from Charleston.
Will we?
THE UN FLAG: The essential narrative: the flag had to come down because it violated the U.S. Flag Code. It came down. It did not violate the Code, but nonetheless it stayed down. The people who took down the flag (the County Commissioners) had a code of silence, and wouldn’t say who, why or whatever about the real circumstances of why the flag came down. At this writing, they think they have given up. Not so.
https://thoughtstowardsabetterworld.org/wp-content/uploads/2022/04/thoughts-300x138-1.jpg 0 0 dickbernard https://thoughtstowardsabetterworld.org/wp-content/uploads/2022/04/thoughts-300x138-1.jpg dickbernard2015-06-20 11:17:112015-06-20 11:17:11#1037 – Dick Bernard: Compassion and Flags and a call to action.