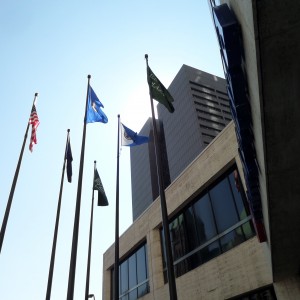 Flags at U.S. Bank Plaza, Minneapolis MN, Sep. 17, 2014. Hennepin Government Center in background. Four of the six flags appear to be corporate flags, along with U.S. and Minnesota. All flagpoles appear to be identical in height. 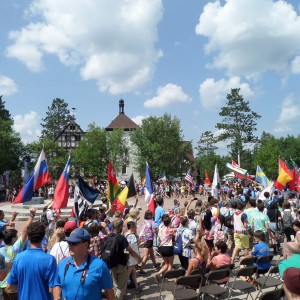 The American flag in procession with others at International Day, Concordia Language Villages, Bemidji MN, August 8, 2014 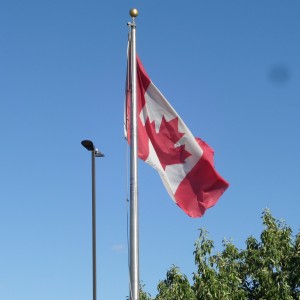 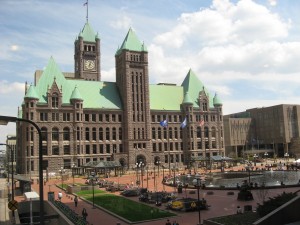 ACTION REMOVING THE UN FLAG FROM HENNEPIN COUNTY MN PLAZA March 27, 2012: UN Flag Res 3-27-12001
To the best of our knowledge, UN Flag had flown continuously at the Hennepin Plaza site for 44 years, from May 1, 1968, forward.
The 2012 vote was unanimous – all seven Commissioners present on March 27, 2012 voting yes (unless otherwise indicated, all Commissioners (bold-faced) remain on the Board as of August 14, 2014.)
Commissioner Opat Moved adoption
Commissioner Stenglein Seconded the motion*
Commissioner Dorfman**
Commissioner Randy Johnson
Commissioner Callison
Commissioner McLaughlin***
Commissioner Jeff Johnson***
* – Commissioner Stenglein appointed CEO of Minneapolis Downtown Council in February, 2012, starting new job on June 1, 2012; in June, 2013, Stenglien left the Downtown Council position for unknown reasons (news article here).
** – Commissioner Dorfman resigned as Commissioner in Feb. 2014 to take another position.
*** – in the posted Minutes for 3-27-01 these individuals are listed as not present; but the official record of the meeting shows them both voting Yes on the motion.
Commissioner Linda Higgins was elected to Stenglien’s Hennepin County Commission seat in the November, 2012 election and thus had no involvement in the original action.
I wrote at length on the issue on March 5, 2013 here.
Friday April 12, 2013, I hand-delivered two letters to all Hennepin County Commissioners, and the uninvolved in the issue but nonetheless parties at interest, the Mayor and City Council of Minneapolis. The relevant portions of the letters is here: Henn Comm Ltrs 4:12:13001 As of July 15, 2013, there have been zero responses to my questions. A third request for the information was mailed on July 13.
The listing of all Hennepin County Commissioners, their districts, and office addresses can be found here.
Here’s a photo of the flags at Hennepin County Government Plaza taken Tuesday April 9, 2013, from the same steps where Gov. Elmer L. Andersen spoke May 1, 1968, on the virtues of World Citizenship and flying the flag of the United Nations at the Plaza. 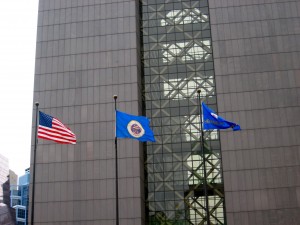 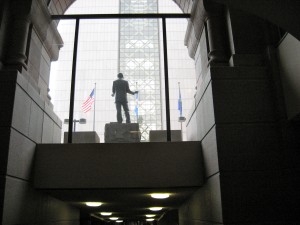 The Hennepin Co Plaza flags as seen from inside Minneapolis City Hall April 12, 2013 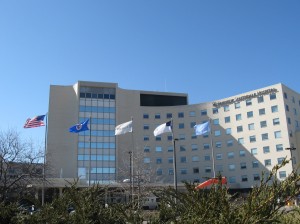 One year ago today – March 27, 2012 – the Hennepin County Board quietly passed Resolution No. 12-0167, rescinding Resolution 86-7-539 and directing “to fly at the Government Center North Plaza solely the flags of the United States, Minnesota and Hennepin County, in compliance with the U.S. Flag Code.”
I wrote at length on the issue on March 5, 2013. That commentary is accessible here. In that commentary I noted on March 5 that “I’m still searching for more facts” on the U.S. Flag Code, and contemporaneous with my column I wrote my Congresswoman and both MN U.S. Senators seeking more definitive information on the legislative history of that Code.
Sen. Franken’s office was first to respond to my request, with 40 pages of information, including the Congressional Research Service (CRS) document on the United States Flag prepared by John R. Luckey, Legislative Attorney, February 7, 2011. (Citation on the cover: Congressional Research Service 7-5700 www.crs.gov RL30243). Two pages of this report included highlighted sections (see attached pdf U.S. Flag Code (portion)001). In addition, a dozen pages of Legislative Documents were included, including this statement by then ND Sen William Langer, May 12, 1953: Flag Code (1953 Langer 001. Also received, another dozen pages of Congressional Record entries between January and June, 1953 Flag Code (1953 Cong) 001. All of these pages are included.
Some personal observations, at this point:
1. Whoever initially advised Hennepin County Commissioners on the U.S. Flag Code in 2012 was speaking opinion and not fact:
A. The Section of the code cited, 7, relates to the flag “when carried in a procession with another flag….”
B. In addition, the CRS analyst notes later that aforementioned Section 7 contains two subsections on point and these provisions appear to be contradictory (Subsections 7(c) and 7(g).
2. In reading the assorted documents, including the rhetoric in the Congressional Record, I noted these facts:
A. The Flag Code was originally passed June 22, 1942
B. The amendments to the flag bill, particularly relating to the United Nations flag, were first proposed on August 22, 1951, in the 82d Congress. They were ultimately passed in the 83d Congress in the Spring of 1953.
C. The key legislative actors at the time appear to be these: U.S. Sens Martin, Hendrickson, Knowland and Langer; Reps Reed (Illinois), Gross and McDonough.
D. The bill finally passed apparently included this language: “(b) Whoever knowingly violates the provision of this section shall be fined not more than $250 of imprisoned not more than six months, or both.” (Flag Code (1953 S 694) 001) To my knowledge, no such penalty language remains in the Flag Code, and apparently has not appeared there for many years.
3. I am old enough to remember well the post-WWII days of the police action in Korea, Sen. Joe McCarthy…. I was a teenager in rural ND when the 1953 amendment was passed. There was near hysteria, then, about allegations of “Communists”, including additional animosity towards the very existence of the United Nations. What happened in Hennepin County a year ago has all the appearances of a latter day manifestation of the same paranoia that caused our country so much grief in the Sen. McCarthy era.
It appears that the Hennepin County Board made its decision March 27, 2012, on at minimum incomplete information, perhaps without any debate. All but one of the Board members who approved the initial action remain on the Board, and it is time to reopen this file, and give the issue of the United Nations flag the dignified and public hearing it deserves.
POSTNOTE: As noted in the March 5 column, I had not paid much attention to flags, generally, including their arrangement, etc. This has changed. Recently I spent some time at a hotel in Orlando FL. The hotel is part of a world-wide chain, and I noted the flags out front: the U.S. flag, posted slightly higher than the Florida flag, with the Corporate flag in equal standing to the Florida flag. Flags do carry a message about us….
Here they are (click to enlarge): 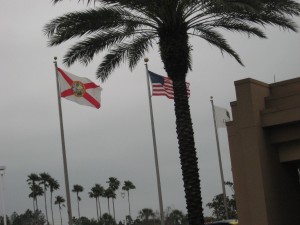 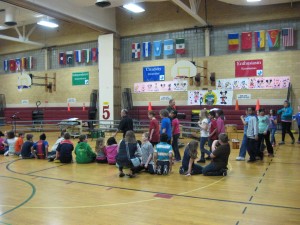 *
NOTE MAY 3, 2013: This page is the permanent “filing cabinet” for information about the events which began March 5, 1968, with the Declaration of World Citizenship by the City of Minneapolis and Hennepin County.
On World Law Day Wednesday, May 1, 2013, the Minneapolis Star Tribune carried two commentaries directly related to World Law Day and the United Nations Flag, written by Dr. Joseph Schwartzberg of GlobalSolutionsMN.org and Minneapolis resident Jim Nelson. The United Nations Association of Minnesota is on record about this issue: UNA Position001
The evening of May 1, at Gandhimahal Restaurant in Minneapolis, 40 attended a dinner celebrating World Law. Here is a blogpost written about the event.
UPDATE August 20, 2013: Correspondence between a Henn. County Commissioner and Dick Bernard: HennComm08162013001
UPDATE September 11, 2013 here.
UPDATE December 19, 2013: Dec. 11, 2013, I sent the following to the Hennepin County Commissioners: Henn Comm Dec 11 13001 The mailing included the Dec 11, 2013, letter (in original misdated Nov 11, 2013) plus the Dec. 29, 2012, letter. In early November, 2013, I was made aware of a 1965 Declaration of World Citizenship signed by President Lyndon Johnson which directly relates to this issue. The post about that Declaration is here.
UPDATE June 14, 2014: My blog post for June 14 makes reference, and links, to this issue and post. I haven’t raised my question with the County Commissioners for some months, but will again.