This post has numerous parts, thus “potpourri”.  Browse through, check out what you wish.

Pre-note 4:30 a.m. Nov. 6, 2020: Overnight, “Rage Against the Inevitable”.  As I noted yesterday, “my next election post will likely come after there is [some relatively reasonable] consensus on who is declared winner of the Presidential election.”   Blogging will continue, including on politics.  Check back each week.

Pre-Note Nov. 5: This post is really a potpourri of items about the election I found of interest till election day itself.   It began before the polls opened on Nov. 3 and continues.  I’d suggest simply scrolling through and looking at whichever you might find interesting.  And most of all I suggest you stay engaged as a citizen.  We are all called on to be “President” of this country in which we live.  Avant! (Forward!)

My next election post will likely come after there is at least consensus on who is declared winner of the Presidential election.

Nov. 6 from JoAnn Ward, my former State Representative: Greetings in this time of uncertainty.  I became involved with Braver Angels (previously Better Angels) while serving in the MN House.  Please consider signing the letter, and joining me in the work of a higher partisanship – for the maintenance of our Union.  Call, email, or text me with questions, or to share the work.  I’d love to hear from you.

I am a moderator for the workshops, and I invite you to explore the Braver Angels website to learn of the many ways to connect with others who are also on this journey.

We are not enemies, but friends. We must not be enemies. Though passion may have strained, it must not break our bonds of affection. The mystic chords of memory … will yet swell the chorus of the Union, when again touched, as surely they will be, by the better angels of our nature.— Abraham Lincoln, 1861

“Life is short, and we do not have too much time to gladden the hearts of those who travel with us, so be quick to love and make haste to be kind.”
Henri-Frederic Amiel
“There are two primary choices in life: to accept conditions as they exist, or accept the responsibility for changing them.” Denis Waitley
“So let us begin a new remembering on both sides that civility is not a sign of weakness, and sincerity is always subject to proof. Let us never negotiate out of fear. But let us never fear to negotiate.” John F Kennedy

There has been numerous comments to my Oct. 23 post: “Antifa”.  In particular I’d recommend revisiting the link at the beginning of the post to the website of the Weisman Art Museum, Minneapolis, for information on past and upcoming programming on its Fascism in Minnesota in the 1930s.  Information in the following two sections: “How Do We Know Fascism When We See It?”  “Brooks Turner: Legends and Myths of Ancient Minnesota”.  There is an important on-line live discussion on Nov. 18 7-9 p.m.  Details at Brooks Turner section.  The previous talk by Brooks Turner may be on the WAM YouTube channel.  The talk was very interesting.

During the month of October, through Election Day, I created a blog including the front page headlines of the Minneapolis Star Tribune for each day.  That post is here.

Last week, a. highly respected group I’m part of, Fresh Energy, had its annual breakfast, this year, virtual.  Here is the program, including the keynote speaker, for those interested.

I’ll publish  the first part of this before the polls open on the east coast, and not make any amendments or additions till after the stateside polls close, which for me, means tomorrow.  I cast my ballot by mail in early October.  Anyone who knows me or reads this blog knows where I stand and why, and has for some months now.

This is easily the oddest election in my lifetime, at minimum.  I’ll have opinions to share later.  In the interim some thoughts on voting, below.  And for the history buffs, the summary I did of the very long month deciding the 2000 Presidential election involving George W. Bush and Al Gore.  At your leisure, here is the 20 pages: U.S. President Election 2000.

Here’s what the overnight Just Above Sunset summarizes as the last day of campaigning ended yesterday: When Less Is Never More.

A following post will be my own musing on my history as a voter in the United States of America since I turned 21 in 1961 (21 was then the voting age).  Have a good day. 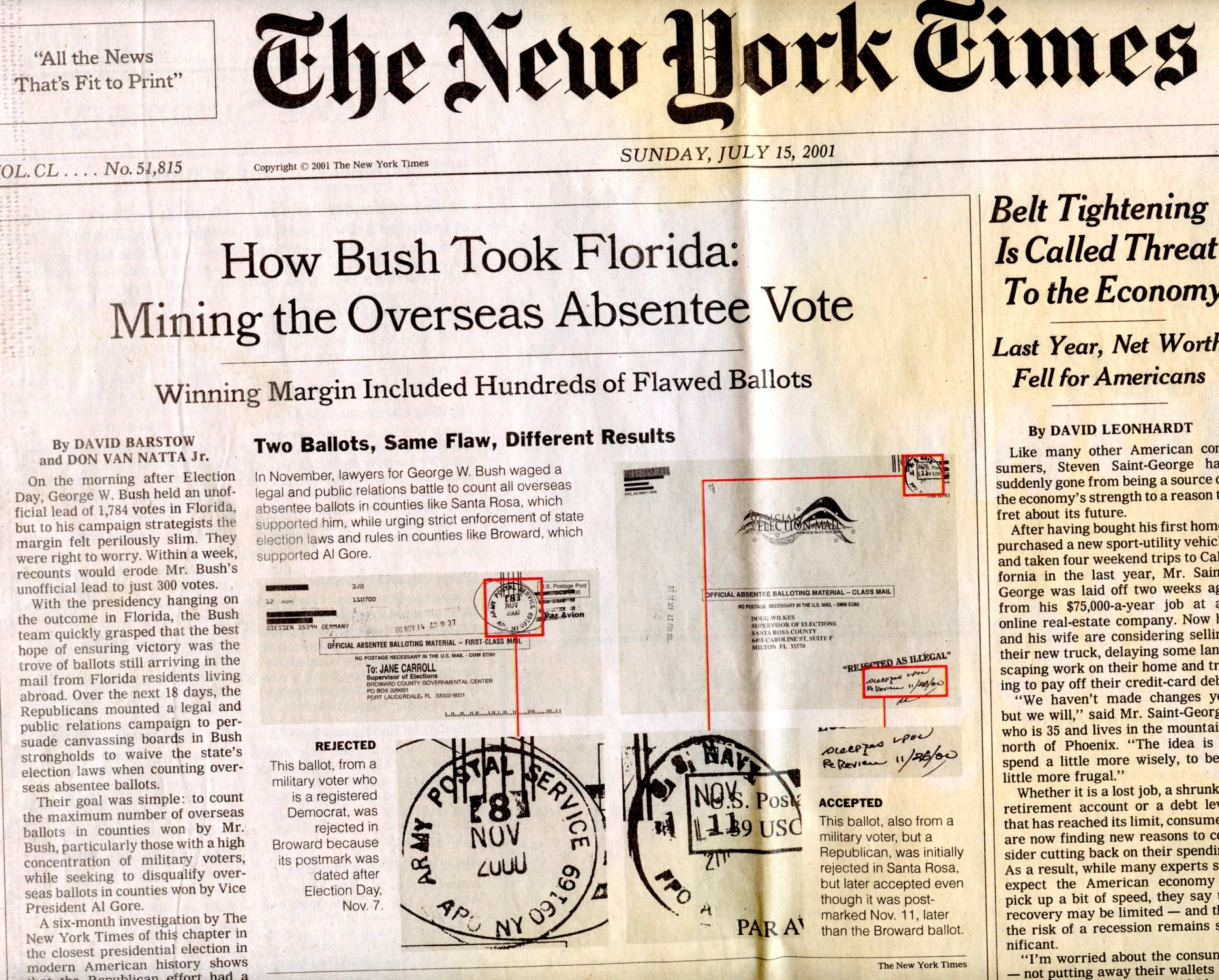 front page of Sunday July 15, 2001 New York Times.  This is the first part of a several page report in the New York Times about the controversy in the 2000 election.

Also, a Nov 1, 2020, New York Times report on voter suppression: “Why Are Republicans So Afraid of Voters?” Voter Suppression NYTimes 11:1:20

Oct. 6, 2020 from Annelee in rural Minnesota: The email on Trump is from my niece, [who lives] near Munich, Germany. There are no words  I can add, only sadness when I look at the Trump signs around my home. Will people wake up too late?

You wanted to know what Germans think about Trump.

Well, only ridicule and malice. What more can you say about such a theater. we are sitting together at work and teasing and laughing at Trump. No one can understand how the American people endure this man. Only lies and stupidities come out of Trump’s mouth. Here is a report on Trump. All morning, the reporters ridicule and tease Trump on the radio and TV. Really funny. The Germans are slowly starting to care less who becomes president in America. This is your president. We are a sovereign state that no longer lets America dictate what we should and should not do. It won’t be a good time. the transatlantic relationship has ruined Trump. We Germans will survive this, we are a strong people and have survived very different, worse times. we will also survive Trump’s sanctions and make our politics and not those that Trump would like to have for Germany. The politics for Germany is made in Germany and not in the USA. Such a madness. Was it all just fake and Trump has no COVID at all or is this man really just insane when he has COVID, how irresponsible. This is supposed to be the most powerful man in the world, this is a madman and clown. COVID is extremely contagious and can be fatal. How many people have to die in the US before anyone wakes up in the US? Without words.

The situation in the morning

By Roland Nelles , US correspondent

Between madness and reality

To the outside world, what is currently happening in the United States may seem bizarre or curious, maybe even laughable. For many people who live in the country, however, the situation is no longer funny.

The handling of the coronavirus by US President Donald Trump and his entourage in the White House is becoming more and more delusional. As things stand, Trump has apparently discharged himself from the hospital because he wants to prove to the whole world what a strong guy he is and how harmless the virus is from his point of view. When he returned to the headquarters of power, he posed on the balcony of the White House for the photographers without a mask .

Donald Trump on his return from the hospital

Donald Trump on his return from the hospital Photo: 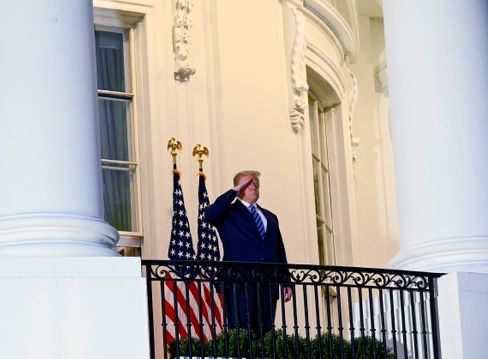 They are images like from a Hollywood autocrat parody , but they are real. Trump gives the fearless fighter to win the November 3rd election. At the same time, he further downplays the danger posed by the virus: “Do not be afraid of Covid! Do not let it dominate your life!”, Trump tweeted to his compatriots. “I feel better than 20 years ago.”

In particular, the relatives of the more than 200,000 Americans who have died of the disease in recent months are likely to wonder more than ever whether their Commander in Chief still has all the cups in the cupboard. The US journalist colleague Gloria Borger commented: “If 1,000 people died every day in plane crashes, would the president also say, don’t you fear flying?”

Trump’s doctors have indicated that the president is doing much better, but that he is not yet out of the woods. Trump apparently takes steroids , according to the hospital , which experts say can lead to extreme activity, mood swings and sleep disorders in some patients . Feelings of megalomania are also said to have occurred.

What exactly triggers the treatment at Trump is not clear. Either way, it’s not a particularly comforting feeling to know that the most powerful man in the world is under the influence of drugs that could have the mentioned side effects.

COMMENTS (more at end of the page)

Nov. 3 from a good friend in England:  Many thanks Mr Bernard I just read your blog & Just Above Sunset.

A year of election fever. 4 years of tweets, bluster & lies.

I can see my old English literature teacher, who assigned us Jane Austen’s Pride & Prejudice, rolling his eyes as was his wont, and perhaps quoting from that very book:

“That will do extremely well, child. You have delighted us long enough.”

Or as Juliet said (according to Shakespeare): “Wilt Thou Be Gone?”

In this context less is definitely more.

Nov. 3 from Kathy: Nice grounding experience to be working at the polls today.  Despite the fact that 70% of our precinct voted ahead of time there were 50 folks in line when we opened at 7:00am in St Louis Park.

Steady all day since then. No drama, just determination and commitment to participate.  To vote.
Grateful to be here.
Nov. 7, from Flo, responding to Joann’s Braver Angels above:
I didn’t want another four years of Trump, but I’m really concerned about how the US will overcome the very seriously divided government we now have from a very contentious election. An acquaintance of ours here asked to meet with us in early August to discuss our politics. We agreed, believing that we could share our perspectives respectfully. Unfortunately, his agenda was to tell us how wrong we were to be Democrats. When we parted company on the matter in mid-October, he was convinced that our nation needs to split between conservatives and liberals, two nations where we’ve been one since the Declaration of Independence. Yes, like the split that led to the Civil War. I’m still shaking my head about his anger directed particularly toward me for not understanding why it had to be the outcome! Yes, we live in a very red rural area of Minnesota. What do you think?
(2, also from Flo) Several Leagues in your area, including Woodbury, I believe, have been engaged in the Braver (Better) Angels initiative. Let me know if they still are. It would be an incredible uphill battle to get one going here. For a couple of conversations we had with the guy who wants to divide the US, a guy who had promoted “Conversation Leading to Understanding” joined us. That didn’t go well, either. All I can say is that we tried.
Response to Flo from Dick: A suggestion to you, personally.  You are very astute and aware of the politics in your area.  Probably best to start conversations with people who you know to be more moderate.  I used to say ‘’each one, reach two” – I’ve decided two was too ambitious. If we each tried to reach one, more doable.
https://thoughtstowardsabetterworld.org/wp-content/uploads/2022/04/thoughts-300x138-1.jpg 0 0 dickbernard https://thoughtstowardsabetterworld.org/wp-content/uploads/2022/04/thoughts-300x138-1.jpg dickbernard2020-11-03 05:55:132020-11-07 15:34:32Voting 2020: A Potpourri
1 reply