You never know what will blow in off the internet.

Friday came an e-letter about Paul Schurke and Dmitry Shparo, who co-led the U.S. Soviet Bering Strait Expedition in 1989.  The 30th anniversary of that expedition is June 3.  The writer noted that an overlooked fact was that a reunion of Schurke and Shparo was a planned part of the Mikhail and Raisa Gorbachevs visit to the Twin Cities June 3, 1990.

In fact, the reunion of the two young men was one of the main reasons for the visit of the Gorbachev’s.  There were other items on their agenda, to be sure, but a main reason was to recognize the bilateral cooperative venture between two citizens of the world involving two cold war nations, Russia and the United States.

I had blogged about Gorbachevs visit in 1990, my June 4, 2011 blog at this space (here).  The writing was based on information I had at the time, including that day in which I had done my best to follow the Gorbachev entourage around during that chilly sometimes drippy day of June 3, 1990.  The post was picked up by the Twin Cities Daily Planet, here, which is what the letter writer had seen and was responding to.

I didn’t know, till yesterday, via the surprise e-mail (see postnote, below), that a main reason for Gorbachev’s stopover in Minnesota was to give Paul Schurke and Dmitry Shparo an opportunity to reconnect – information overwhelmed by local, national and international politics – a visit by Mikhail Gorbachev to Minneapolis was, after all, a very big deal, especially in 1990.

My favorite photo, then and now, was watching the Soviet “Air Force One” preparing to take off from Twin Cities airport.  One of my photos is below. What a memory.  I wish I could transmit to you the sound of the planes engines on takeoff.  In those days you could still stand near the fence by the runway.  Oh how things have changed. 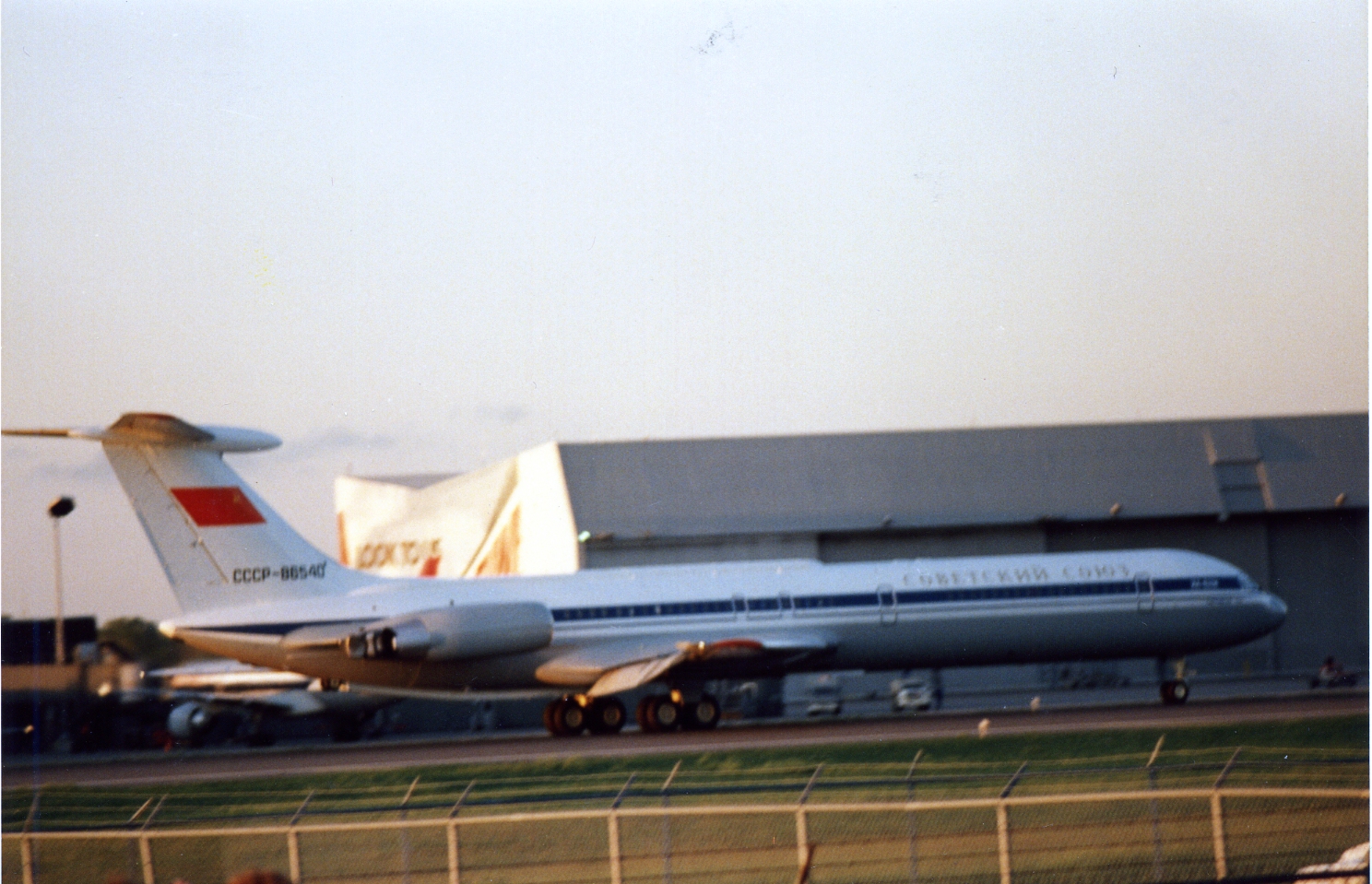 Each of us of a certain age, who lived as adults in the 1980s remember the adventures of this decade.  I deeply appreciate the opportunity to look back, even though I was only an interested spectator! 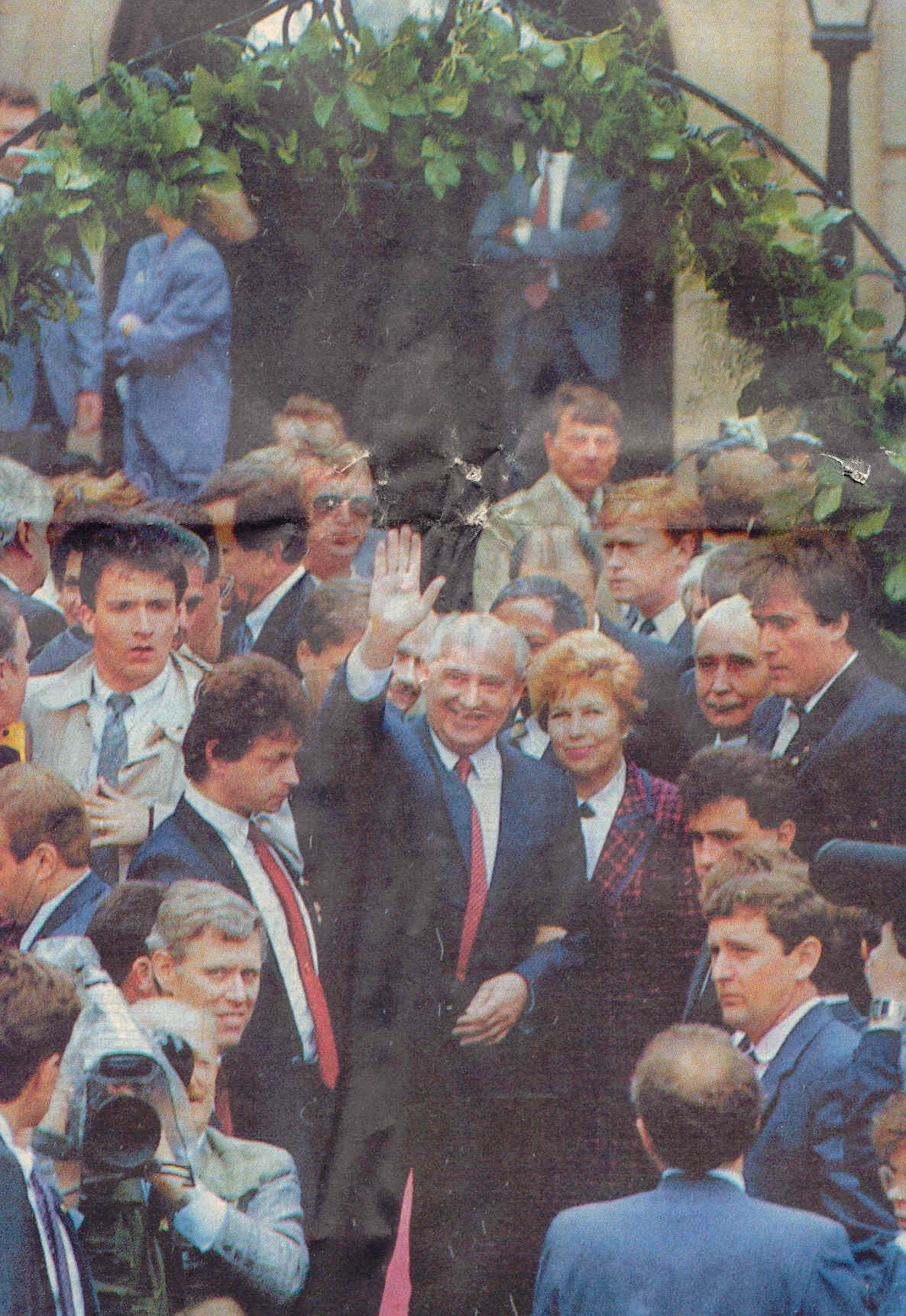 POSTNOTE: The mysterious e-mail arrived in my junk mail at 11:21 a.m. on Friday, May 31.  It’s sender was someone I didn’t know, who I probably will never meet, since the writer lives hundreds of miles away.  The writer didn’t know that at the same time the e-mail was zipping across the internet I was meeting with a man who is in the final stages of a yet to be released film, The World Is My Country, a film which will be – my opinion – a game-changer for today’s young people who might have trouble feeling optimistic about the future we’re leaving behind for them.  The kids have not yet had the opportunity to see it.

In their way, Paul Schurke and Dmitry Shparo (and many others like them, (including World Is My Country star, Garry Davis, long before them) have blazed a trail for the rest of us.  All we need to do is to dust ourselves off and help todays young people save the future, whose prospects we have so badly damaged.

About a year ago I tried to bring some personal definition to where we are at this point in history.  If you’re interested, go here, and read pages 25-26 of “A Rough Draft for History”.  What is your analysis?  What can you contribute?

The Gauntlet “Good mornin’ America how are ya?….”
Scroll to top