Prenote: I encourage you to take a look at, and participate in, the upcoming Peacestock of the local Veterans for Peace.  It is next Tuesday evening.  Details here.

I published Louts a week ago, and a day later I was thinking about an old photo in the treasure trove at the ancestral farm in North Dakota.  It is below, and it largely explains itself.  It came to mind in reference to our present day tribal society.  So did Blessed Debt, published Wednesday.  Both have several comments which stimulate thought.  An over-arching question: Do we find a way to live together, or do we engage in a fight to the death of our democracy?  This is not an idle question. 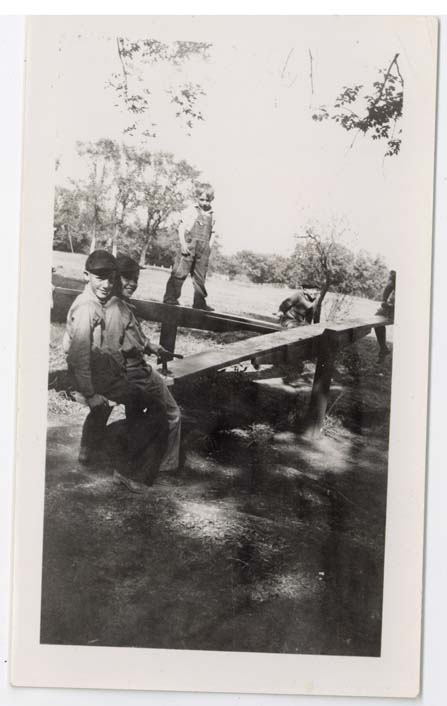 The teeter-totter (aka seesaw) would be familiar to anyone in my general age.  It would have been part of my life beginning in the 1940s.  As we know, it was nothing fancy, and the five kids visible in the picture model it well.  More about it and its companion playground items at the end of this post, but mostly I’d like to very briefly comment on it as a metaphor for contemporary political relationships generally.

The seesaw was a playground staple that required cooperation.  It wouldn’t work for a single dominant individual.  It required cooperation of two sides.  The two kids at the left in the picture had to be somewhat balanced in weight by whomever was on the other end (who was someone somewhat equal in weight to them).  Absent this parity and cooperation, it wasn’t fun.  It didn’t work.  Just like today’s politics.

In the picture, you’ll see another teeter-totter behind the first, and a kid standing astride its fulcrum point.  It appears that there is a kid to his left, and one presumes there is someone somewhat similar in weight to his right.

In both seesaws there was balance.  Good examples of joint effort.

We live in contentious times in which balance almost seems unattainable.  Our seesaw is a nation is at odds within.  To win, the other must lose.  And then both lose.  We all lose.

The balance which our entire environment needs is gone and dysfunction becomes the norm.

Challenge: There is no more explanation needed about how this applies to our society in general.  It’s in your individual courts.  Think about us – all of us – as users of a gigantic teeter-totter, each with wants and needs.

How can we get ourselves back in balance?  This is a critical question for each of us and for our society.

When I was a kid, growing up in very tiny towns in North Dakota, most every school had some semblance of playground equipment.  The most common devices: a swing, some kind of merry-go-round, maybe a seesaw, probably monkey-bars.  These seemed to be the usual, along with the usual running space for working off excess energy at recess.

I started first grade in 1946.  The technology, then, was primitive compared to today.  The primary materials were steel and wood.  There was no apparent attention to safety or aesthetics.  Kids could get hurt.

Over history society has refined the playground to make it a much safer space for children.  Standards were established for playground equipment.

During this week I stopped at a new community playground which has just opened near by, a community memorial to a little girl who died at less than three of a childhood disease.

I looked for a teeter-totter, and a young man there with his child pointed out the 2021 version of the wooden structure of the 1940s.  Here it is: 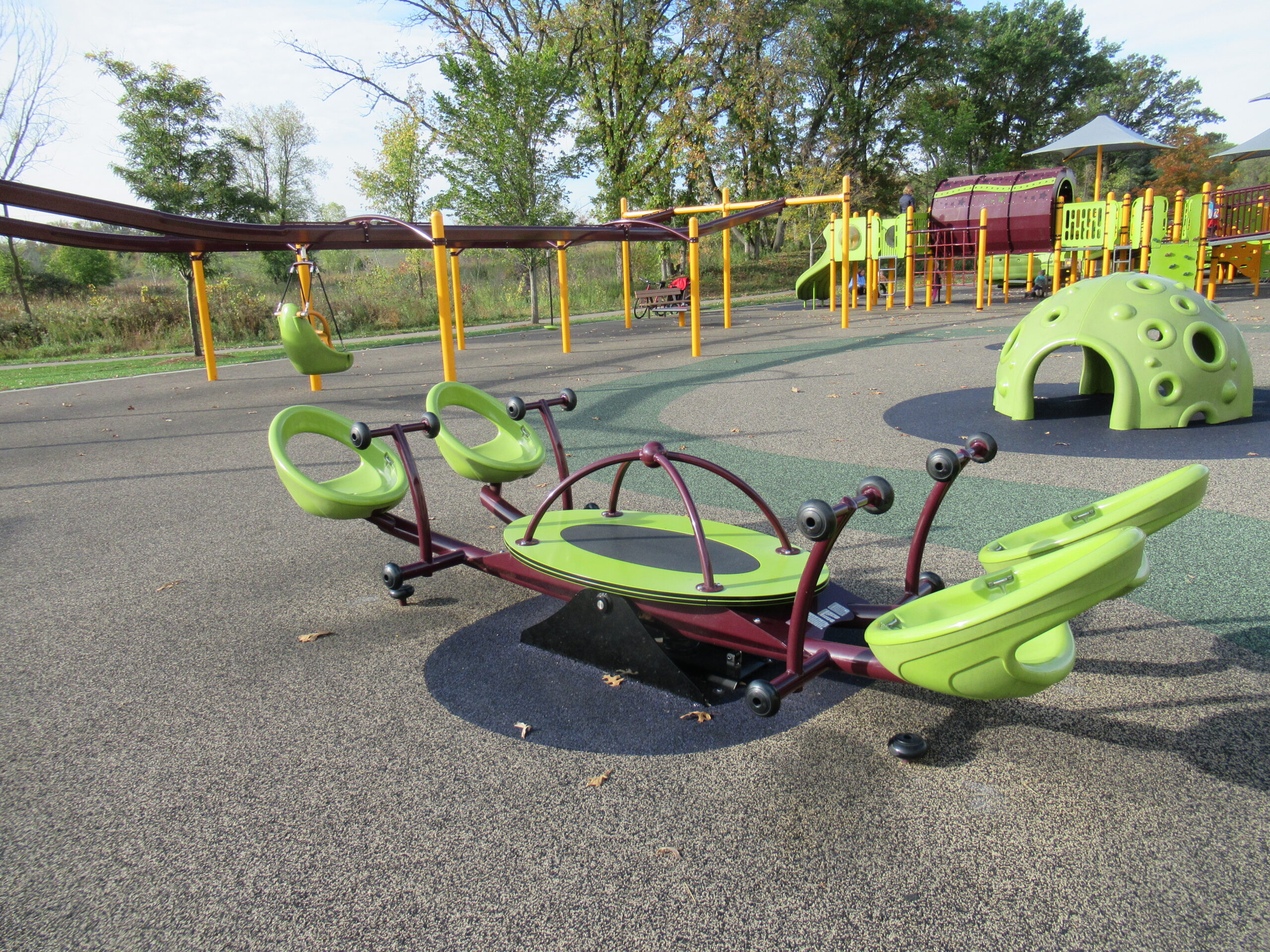 from Sonya (who lives near the ND park in the above photo, and who I asked about Teeter Totter in todays park): There are no teeter-totters at the park anymore and I’m not sure why. Maybe they were deemed unsafe. The park did buy some new playground equipment this spring, but the man contracted to install it was so busy all summer that he didn’t get it done.

from Dick: sign seen on door of local business Oct 15 before this post was published.  It is not known who put it there.  It appeared to disappear by the next day, for reason unknown.  But the meeting it advertises is probably still on, and not friendly to people its organizers think shouldn’t be voting…. 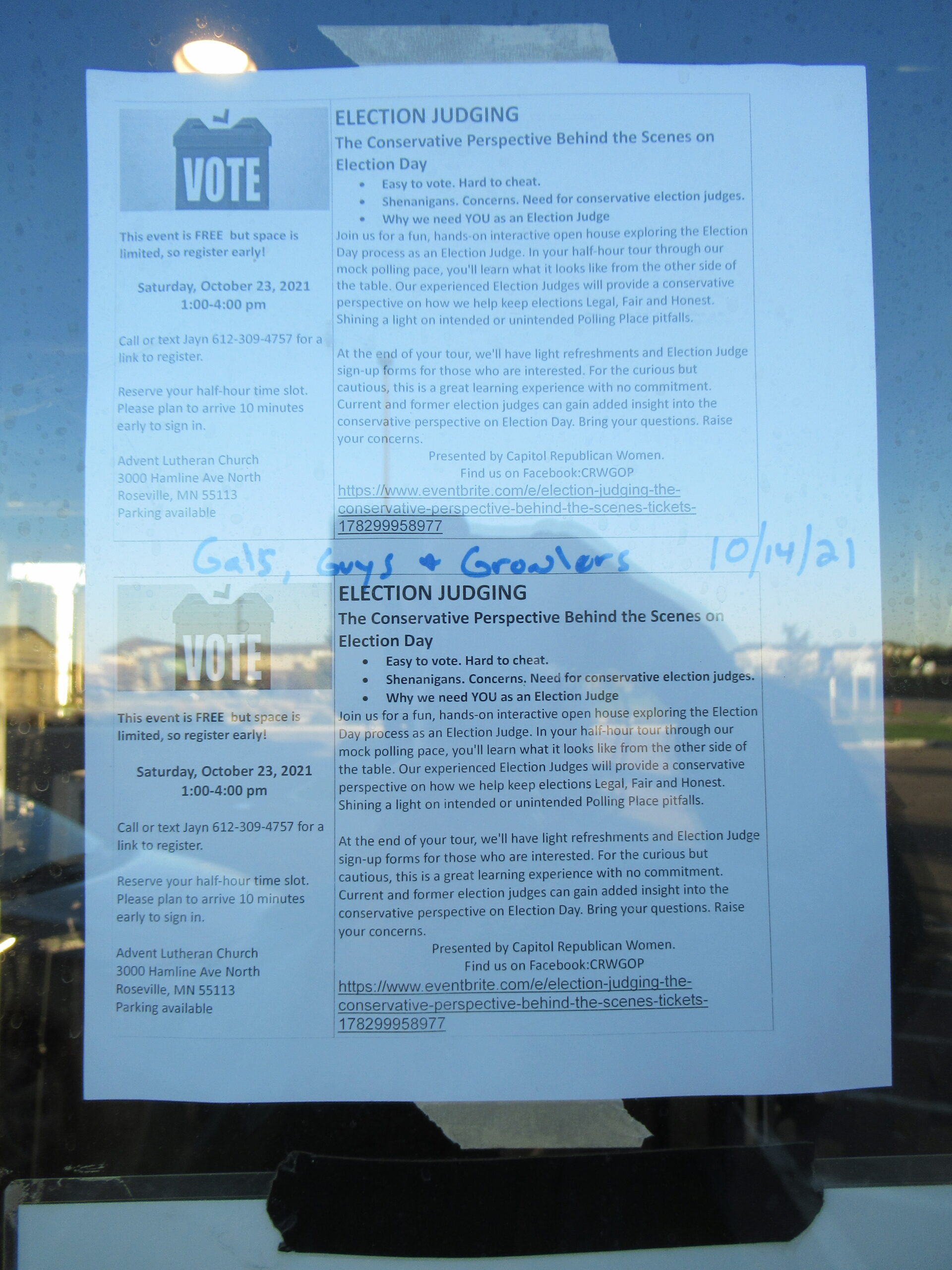 POSTNOTE 2 Oct 19: I opened this post with a comment thinking about a teeter-totter Aug. 10.  A few you responded.  Most especially, I noted Mary Ellen’s, below: “The lesson I learned had less to do with physics than with human nature – that is, not to get on a teeter-totter with certain people. I appreciate your emphasis on the cooperation necessary for a smooth ride, but what do we do with the bumpers?” (Emphasis added).

What Mary Ellen – a retired teacher – observed is what we all observed, as kids.  Bullies – that is what the “bumpers” usually were – spoiled the fun for the little kids.  In fact, this is possibly a major reason that you no longer see those kinds of rides in playgrounds.  They were not so much physically dangerous (though they could hurt) as they weren’t fun when the bullies took over.

Bullying extends far beyond big louts on the playground of course.  I read recently that Republicans have introduced over 400 bills in 49 states to suppress the vote and so on.  They are not seeking to balance the teeter-totter.

We are in a hopefully brief era, right now, where bullies and their admiring acolytes are setting fire to our democracy by attempting to subvert and thus control the process of selecting our representatives in elections of all sorts at all levels.  Mary Ellen asks “what do we do with the bumpers [bullies]?”  First and foremost, we confront them I’m each and every instance; secondly, we neutralize them by voting in each and every election.  The bullies of today know they are in a minority, and the only way they can prevail is to dominate in any way possible.  Bullies are basically cowards, but they’ll dominate unless exposed and at minimum neutralized.

Teeter-totters were no longer fun for bullies when their little kid companions (and the kids parents) wouldn’t subject themselves to the bullies harmful behavior.  In my opinion, today’s bullies will deeply regret the dominance they think will give them control over the rest of us.  But we have to first of all take them on.