See, at end of this post: “BONUS, The World Is My Country” 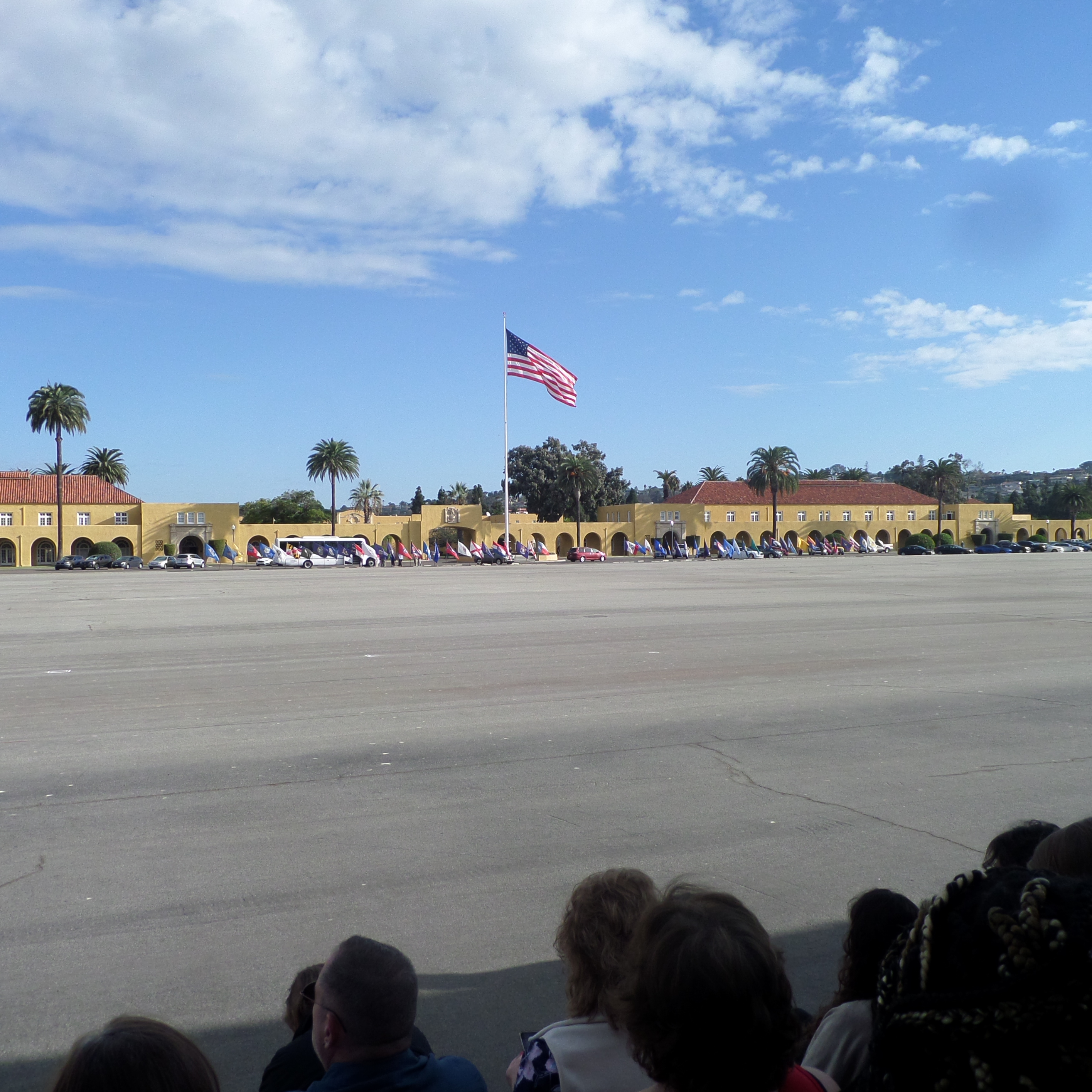 November 6, Election Day, is slightly more than two weeks away.  Many have voted already.  I will probably vote this next week – I need to check on two down ballot candidates for an important office first.

No one who follows this blog will be surprised: my vote will be Democrat.

At the polar opposite from me is a man, the current President of the United States, whose only allegiance is to himself alone; and the Republicans have embraced and amplified his views: divide and conquer.

The difference between the above poles matters a great deal to our future as a society; which fork in the national road will we choose?

In the last seven days I witnessed two illustrations of principles which I believe apply to all of us and to our country and its future.

Oct. 12, I was privileged to be in the audience as grandson Spencer and colleagues became full-fledged U. S. Marines at San Diego.  (below photo.  His was one of four platoons who were graduating.)

Oct. 17, we attended our first 2017-18 performance of the magnificent Minnesota Orchestra.

In both cases, a rookie Marine platoon and a world-renown Symphony Orchestra, the same principles apply as must apply to any entity that works.  This includes our country, as part of our world.

To my knowledge (I am a veteran myself, and a long time fan of classical music), there is little room for “me” attitudes in the military, or a symphony.  You are part of, and dependent on, the entire group of which you are a part.  Surely, there are soloists, and guest artists (there were both on Thursday, and an Honor Man for each Platoon the preceding Friday), but an Orchestra, like the military, is a team: all the members, the conductor, the back stage crew, the composers are essential as well as the audience who contributes their money, their time and especially their attention.

You can make your own list of other attributes which mark success, starting with teamwork and discipline.

Contrast the above with our present day political United States of America, where destructive competition is the norm – where for one to win, another has to lose.   Pit one “side” against the other in an orchestra, or a military unit, and see what you get.  Mediocrity in one case, or death in the other.

Simply grade our level of discourse by how we communicate against each other; what kind of arguments “sell” in political advertising; how pervasive dishonest political communication has become; and how and with whom we can even communicate about political issues or candidates.

We have become a nation of losers.

Is the notion of working for a nation, a world, working together naive? Impossible?  Look around you, every day, people who are different manage to live in communities everywhere.  Why should we give up hope for a better world?

As we are now, it is a surprise that our country can even survive.  Being “lone wolves” – “free” – might be an aspiration for those demanding “freedom” – “leave me alone” – but it doesn’t work well in a complex society as is our world.  We are paying a price already.  The cost to almost all of us will only increase.

There is a stark choice Tuesday, Nov. 6.  If you have not already voted, make your choices very carefully. 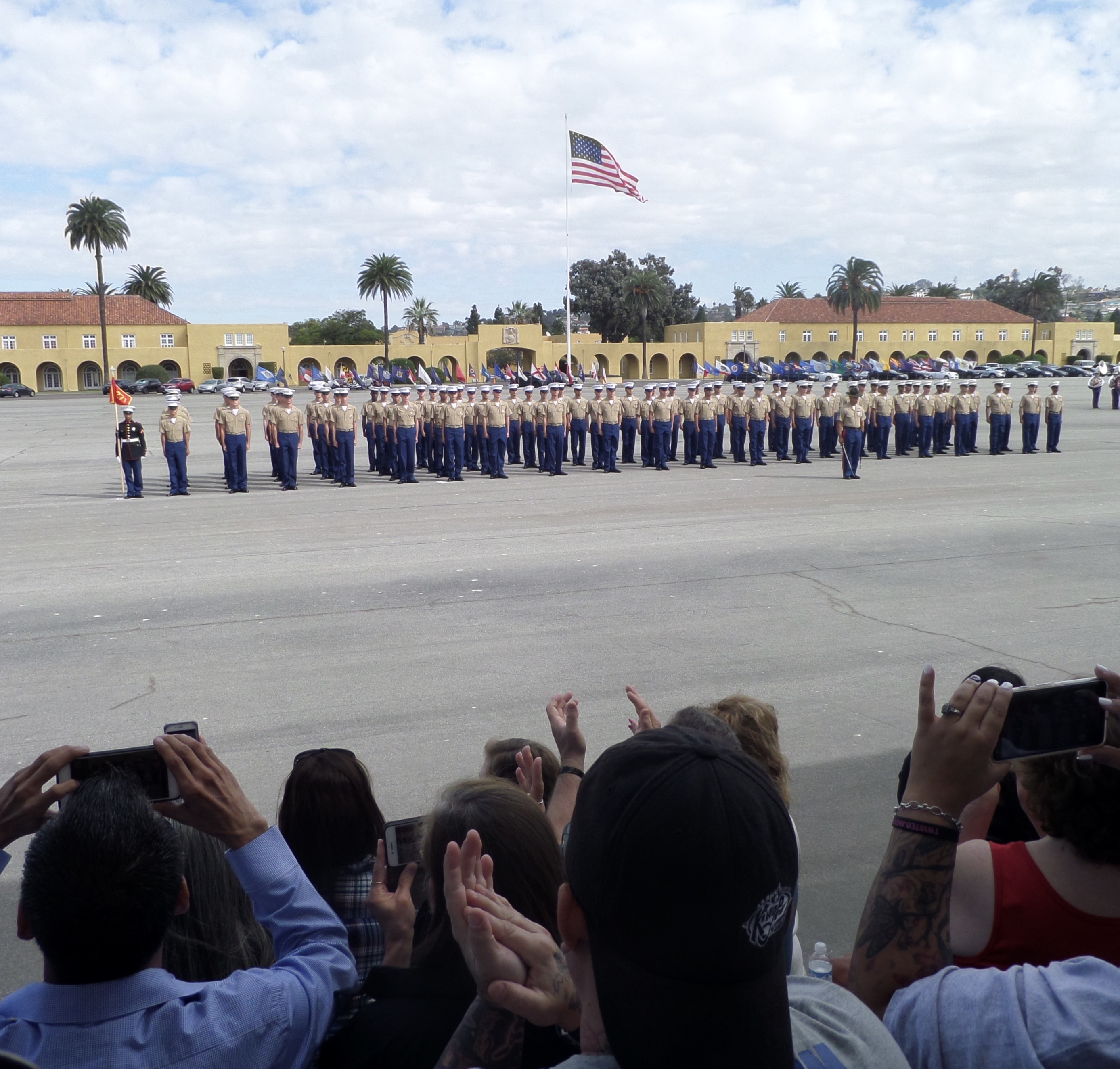 About that empty piece of asphalt – the photo at the beginning of this post: Graduation ceremony over last week, the Platoons were dismissed and allowed to mingle with families and friends.  We were looking to take the shortest route to our destination, on the other side of the flagpole, directly across the asphalt.  But there were Marines stationed to limit our access to almost all of the parade field – the section beyond the slightly shaded portion of the above photo.

I asked Spencer why we couldn’t go across.  His response, as I remember it, was that the Parade Ground was reserved for use by the Marines – probably part of the tradition.  It made a lot of sense: “hallowed ground”, shall I say.  Being a recruit is hard, hard work; much of the the grind is practice, practice, practice, likely on that very ground.

A couple of days before the graduation, my barber, Tom, a Marine vet (who trained at this same training depot, 1965), loaned me his yearbook.  He had been Honor Man in his Platoon (the Marine to the left holding the Platoon flag in the above photo.)  Tom’s platoon was #302, Spencer’s #3271.  A lot of Marines have spent a lot of time learning discipline on this patch of asphalt.

Below is a photo of that same Parade Ground from 1965.

Imagine, for a moment, what that parade ground would look like if every present day American were required to be there, together, for an hour, as those young Marines experienced a short while ago, and before, over and over and over again.  In this time of profound political division in this country, it is hard to even imagine all of us standing together, even for a moment, about most anything….  We are in very dark times in our country.

My friend,Tom, saw very heavy duty in Vietnam.  He once told me that talking with customers like me was good therapy for him.  His younger brother enlisted in the Marines three years after him, and is one of those who were killed in Vietnam (1968).

It was a very emotional moment for Tom last week when he recited something legendary Marine Chesty Puller had said “there are worse things to die for than for your country“.  I looked up Chesty Puller and didn’t find this exact quote, but perhaps Chesty was saying the same thing someone else had said.

At San Diego, Spencer mentioned Chesty Pullers name, so apparently he is still part of the training Marines receive.

May there never be an occasion where these Marines, or any military, either have to kill, or be killed….  It is part of our job to keep the peace. 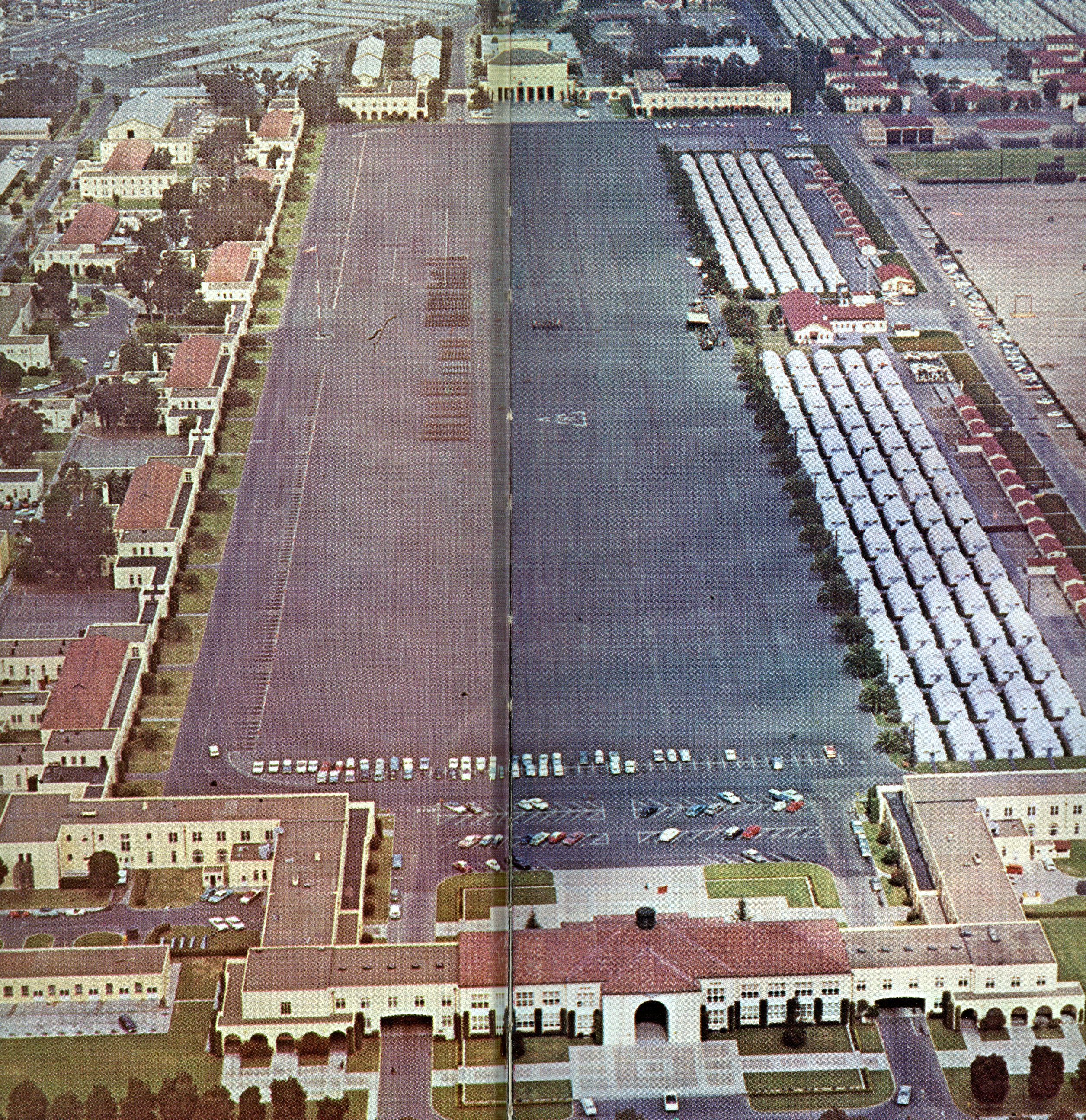 MCRD San Diego 1965, from memory book of Platoon 302, thanks to Tom S.  Our bleachers on Oct 12, 2018, were in front, roughy center, of where the quonsets are seen in the photo.  Those quonsets have been replaced by new barracks.  Just to the right (not in photo) is San Diego airport.

BONUS:  “The World Is My Country”

Starting on Monday October 22 you and any friends will have until midnight October 29 to watch this film free, on-line.
Here’s the link that will go live Monday 9:OOAM Pacific Time.
Code/Password  cgs2018
(NOTE:  The code/password is all lower case and gets entered on both pages.)
There will be a request to contribute to its completion.  Do consider helping.  It is worth it.
I am a strong supporter of this film, and encourage you to watch it.  Open access begins on Monday Oct. 22 and goes for one week.
I have been involved with the project for seven years.
https://thoughtstowardsabetterworld.org/wp-content/uploads/2022/04/thoughts-300x138-1.jpg 0 0 dickbernard https://thoughtstowardsabetterworld.org/wp-content/uploads/2022/04/thoughts-300x138-1.jpg dickbernard2018-10-20 19:43:552018-10-22 17:55:45The Parade Ground.
0 replies