Today is the 73rd birthday of the founding of the United Nations.  There will be a program this evening which I plan to attend: UN Day Program Oct 24 2018.  Till October 29 there is a free on-line viewing available of a wonderful historical film, The World Is My Country003.

Meanwhile, “nationalism” rears its ugly head, officially.  Much more about that for those interested here and here.

Lies have become so routine and so outrageous in the American political discourse, that I wonder how many of us realize the potential consequences to ourselves and our very society, if we are not very careful in assessing who or what to believe.

We can learn from history.  It’s another question if we have learned anything at all….

Back in the old days of 2003 when we were beginning to bomb the hell out of Iraq, a quotation came to my computer screen that was so unbelievable that I took the considerable time necessary to actually search out and read the entirety of the book in which the quote supposedly first appeared, in 1947.  I finally found the book in the dusty stacks of the University of Minnesota Library.  Here is the quote. 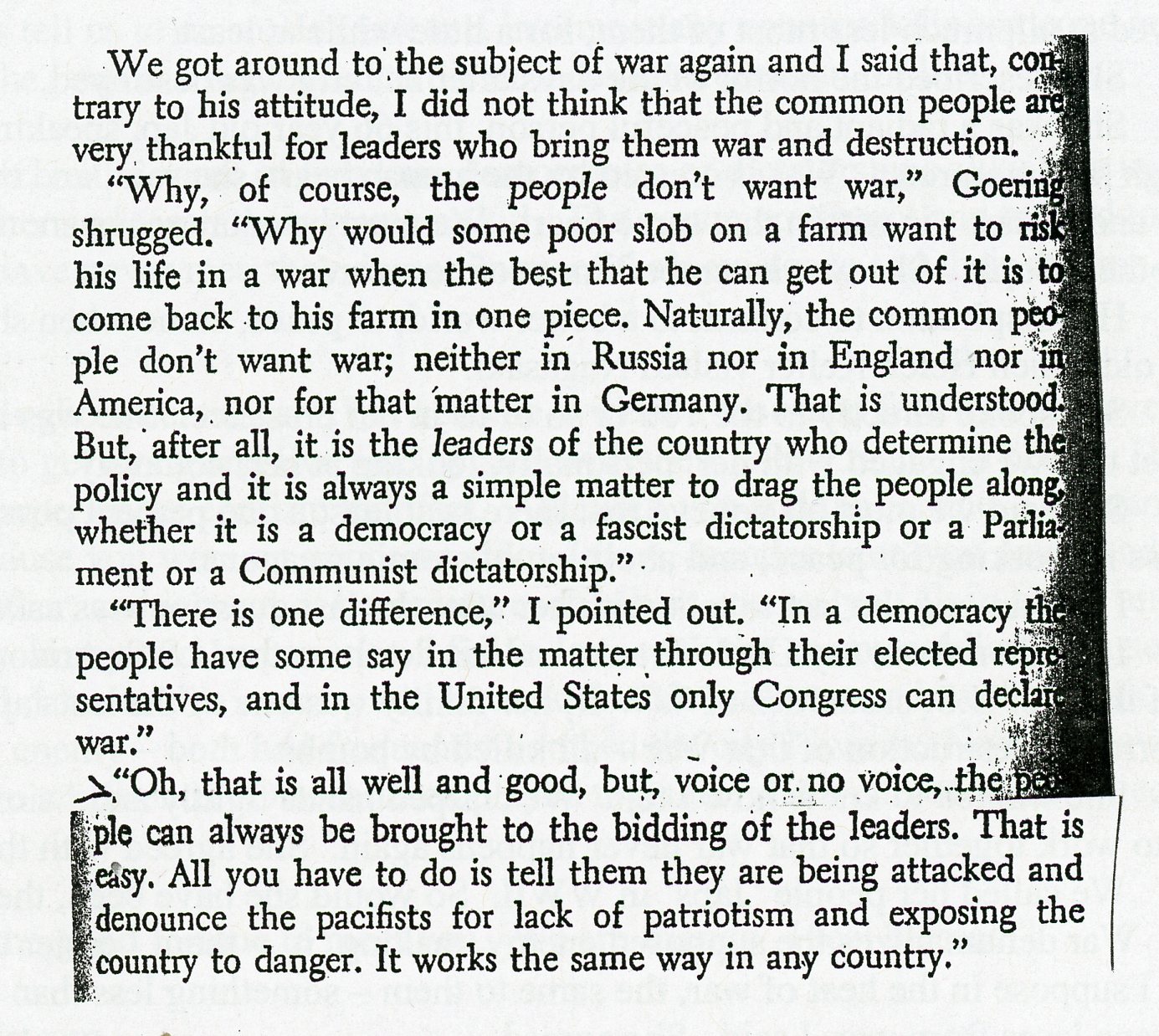 from Nuremberg Diary by Gustave Gilbert, 1947

The person quoted is Reichmarshall Hermann Goering, as recounted by Allied Psychiatrist Gustave Gilbert.  This is found on page 278 of Nuremberg Diary, Farrar Straus and Co c1947.  A pdf of this same page is Hermann Goering 1946001

I especially call attention to the last paragraph.

It took a long time for the Germans to recover from the lies far too many of them believed.

We Americans are no better, and our future is no brighter than the disaster Germany woke up to in 1945.

Ultimately, Hermann Goering committed suicide, before a death sentence could be carried out.

Is our country, the United States, on a “Descent into Darkness”?  We voters and citizens have a lot to say about that in a few days.

POSTNOTE: It was the U.S. and others, through the Marshall Plan, which had a great deal to do with the recovery of Germany and the establishment of permanent alliances to establish the peace after World War II.  Who would want to come to our aid, if our time of disaster comes?

from Judy B: Excellent column, Dick. Things are so scary now!

from Florence: Trump’s call to Nationalism and calling himself a Nationalist rang really loud and clear today! And over 40% of Americans support him!  I am afraid …

from Judy M: Dick, please know how much your wise and attentive articles are.  You are right on!

Many thanks Mr Bernard although the message is very alarming indeed.

As you say it’s getting more & more difficult to disentangle truth from lies & propaganda.

In a book from 1998, Serendipities – Language and Lunacy, Umberto Eco writes:

“The truly genuine problem thus does not consist of proving something false but in proving that the authentic object is authentic”.

People are so confused that they are becoming cynical & skeptical to such an extent that it will be hard to convince them of anything!

Avoiding plastic is all the rage – save the planet one straw at a time. Meanwhile yachts with very few on board are burning tonnes of oil every minute. Something from a London restaurant’s menu:

If you would like a straw please ask your waiter, they are biodegradable J.

But seriously, while people are fiddling about transgender toilets, the right pronoun or who will pay for that wall global warming is threatening the whole planet.

The Financial Times (no leftist rag this one).

“The natural tendencies are either to do nothing, while insisting there is no problem, or to agree there is a problem, while merely pretending to act. It is not clear which form of obfuscation is worse”.

“This is a scale of challenge human beings have historically only met in times of war, and then only against one another. The chances of co-operative action seem near zero in today’s nationalistic world”.

‘Inaction over climate change is more than shameful, it’s suicidal. But shaming those who can do something about global warming will not work. They have no shame. Because they cannot see the wrong in what they do. I agree with Mr Wolf that “we need to shift the world on to a different investment and growth path right now”. I agree rich countries who caused the problem need to pay. The redistribution of wealth to “countries that matter for the solution” needs to happen. But I don’t think it will.

The wealthiest individuals, in the wealthiest economies, are like the character Sydney Stanton, the hobbled billionaire in 1950’s sci-fi film “When Worlds Collide”. He thinks his wealth buys him a seat on the ark. It does not. It only buys the opportunity to build it.’  Video here.

‘Think about this for a moment. The 1000 richest people in the United Kingdom increased their wealth by 184 per cent in the ten years that have accompanied austerity. They accrued £468 billion on top of the £256 billion they already had, while the rest of the population experienced the worst decline in living standards in a generation. They no doubt accumulated this wealth by working hard, making shrewd investments, and leading successful businesses. They also managed to convince successive neoliberal governments to decrease their tax liability. £468 billion could do a lot of good. Why isn’t it? Because trying to shame the Stanton’s of the world into changing their ways is like eating glass. The only person with a lacerated tongue is you. “You did it to yourself.” Shaming them will not work. They still think they can buy a seat on the ark, and a way out of the apocalypse.’

from Mark: An interesting quote. History has often revealed that what started out as reform or initially packaged as positive change or “needed” government assistance has descended into murderous evil.

Who are the Gorings of today? That is the great question of our times. I submit that there is more to fear from those who promote a candy shell of universal common good to hide the ecoli within.

Response to Mark: You ask an interesting question, meriting a much longer conversation sometime.  The Third Reich is a forbidden topic these days, and it shouldn’t be.  I was once told by an expert on the holocaust that Germany had about 70,000,000 people and a half million Jews at the time the Reich was building up steam.  We have about 330 million people, more or less.  In that population there are plenty of Goerings.  I spent my 60th birthday at Auschwitz, May 4, 2000.  Auschwitz was for the Polish political prisoners who were tried, sentenced and shot there; we walked to Birkenau, where the Jews were incinerated.  I will never forget that tour.

More to your point, I’d ask you to go to my May 1 blog: here.  At the blog go down near the end and click on World Law Day 2018, and go to pp 4-5, comments of Benjamin Ferencz.  Ferencz, who is still alive, was the Prosecutor at Nuremberg, a young Jewish lawyer.    You may be surprised by his comments.
It’s unlikely Nazi Germany can happen here, but the Germans in impoverished 1920s Germany probably didn’t think 1933 and beyond would happen either.
Let’s talk more, sometime.  Thanks for responding. 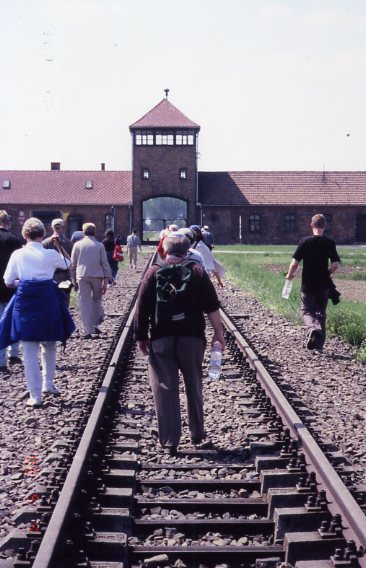 Walking from Auschwitz towards Birkenau Death Camp May 4, 2000. Photo by Dick Bernard

I had requested of our group leaders that we seek permission to walk from Auschwitz to Birkenau.  At that time, I think it was an unusual request.  But it was granted, and it was an extremely powerful couple of miles.  In front of me is Fr. Michael O’Connell, then Pastor of Basilica.  We were with a group of Catholics and Jews, primarily Basilica and Temple Israel.
War is always very good for business, as you know….
from Joyce, a column by Charles Pierce: ‘He couldn’t say “bombs.” Worse, he couldn’t even say any names. He couldn’t say, “Barack and Michelle Obama,” or “Bill and Hillary Clinton,” or “Maxine Waters,” or “John Brennan,” or even “CNN.” But he found room later in his speech to use some of their names to draw adoring applause and angry chants from the mindless drones who turn out to watch him stroke himself, and all of them, until the ragegasm rises and sends them spiraling upwards into orgiastic glee in the misfortune of others…

…on Friday, within the larger context of a nationwide attempted political murder spree, the president*’s remarks centered primarily on his own greatness, and on how unfair it is that his greatness is not universally acknowledged and applauded…

But all of that pales next to the fact that he came to the stage Friday night apparently utterly unaffected by the events that took place in the country of which he is the president*—or, at least, utterly unaffected by anything beyond how it affected him, his public image, and the possible utility of the events to his cheap political ends. That is an ongoing news story, and it’s terrifying.

His administration* is like him now. In 1992, I covered the trial of Jeffrey Dahmer in Milwaukee. I sat through the entire thing. The frightening thing about the defendant was how there wasn’t an ounce of light in him. He was a blank. He was there, but you’d be hard-pressed to confirm that an actual human being was sitting at the defense table. That is this administration*—dead-eyed, almost reptilian in its cold-blooded ability to exist outside the context of what’s going on with the citizens of the country that it was elected to serve. It is as blank-staring as an abandoned casino on the Atlantic City strip…

Now there’s another guy who rode that tide into a synagogue in Pittsburgh, wherein he drowned in actual blood an actual ceremony of innocence. The president* stood in the rain at Andrews Air Force Base Saturday and called for guns in places of worship and a wonderful, sleek, streamlined new death penalty. I had no interest in the president*’s remarks on the subject, because there would not be any life in them.’

The Parade Ground. The World Is My Country
Scroll to top