Last Friday night I saw Al Franken perform at the Acme Comedy Club in Minneapolis.  Initially I was odd man out – five people, four tickets.  Shingles waylaid the person who bought the tickets, and this left an opening for me, which I took.

I’ve known about Al Franken for many years, but must admit I never saw Saturday Night Live – past my bedtime – and it wasn’t till he became politically active that I got a closer look.  He was a man of real substance, a credit to the profession of public policy, by no means a lightweight “comedian”.

I first heard him speak at a Minnesota Democrat dinner in 1996. He was keynoter and he was funny.

Before the dinner, my daughter, Joni, and I had an opportunity to meet him.  Here they are, now 26 years ago. 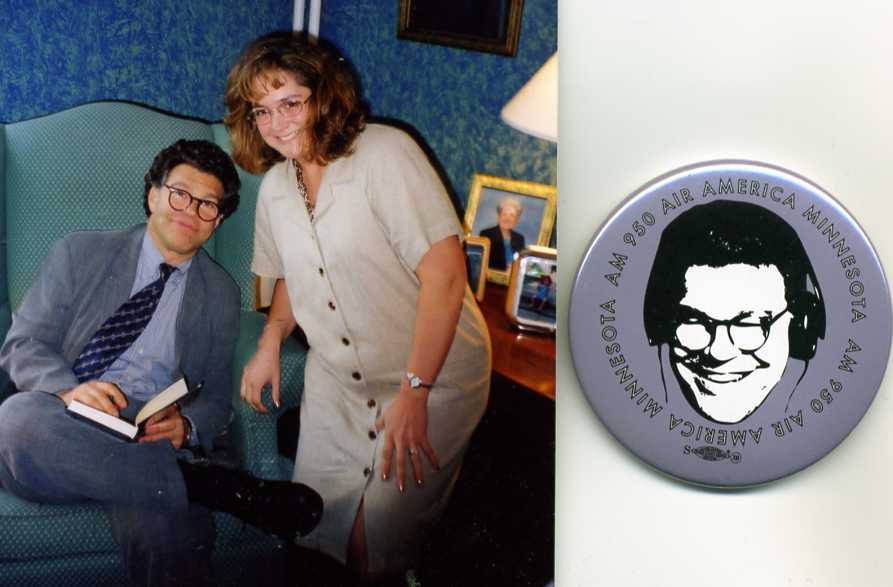 Al Franken and Joni, April 1996, St. Paul. At right, separate, is an old button I got somewhere. 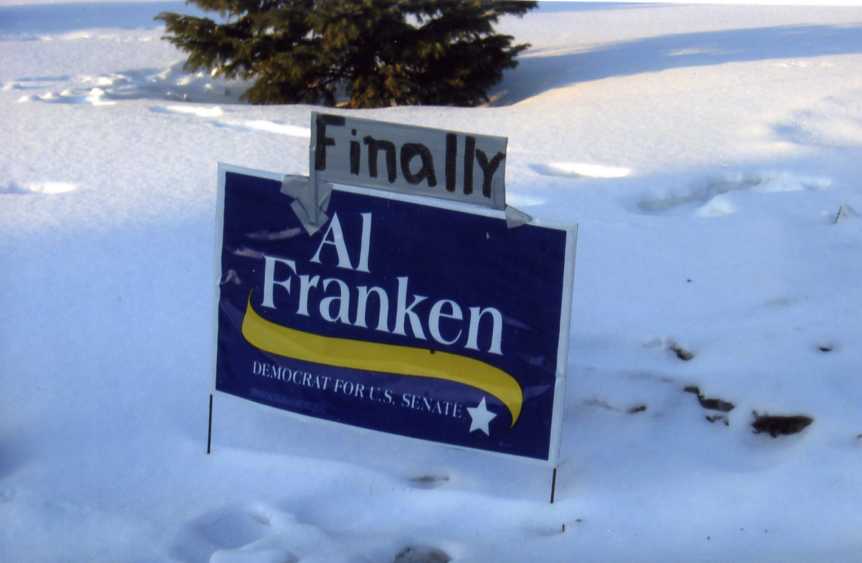 Franken easily won a second term, but was forced to resign in early 2018, the victim of a “Me, too” accusation, later found to be in-credible.  But by then, his Senate career was history.

Franken is now returning to the stage, and his three day stint at Acme, one of which I was privileged to attend in person, was a success.  Earlier in the week he was guest host on Jimmy Kimmel.  You can watch a segment from YouTube here.

Here is Al Franken’s website.  You can see upcoming comedy tour dates around the country.

POSTNOTE: I didn’t know Al Franken as an entertainer; I only knew him as a politician, and he was a high quality U.S. Senator, well informed and thoughtful.  My photo file has 66 pictures I took of he and Franny, his spouse, in various political contexts.  The only time I made a written request to his office, I got a prompt and complete reply, and he really didn’t know me at all.

In the end he had an ignominious political death by resignation.  Succinctly, I think he now wishes he had fought the false allegations, but he didn’t.  I think that by and large his Democrat colleagues agree that it was a mistake that he left.  Tina Smith, his replacement, is a very good Senator as well.

Political death by lies and innuendo has become a time-tested tradition in our country, and has spread into the general conversation about almost everything.  In my growing up, lies were sins, flat out.  Omission or Commission made no difference.  Nowadays lies are protected free speech.  The only antidote I can think of is to refuse to accept at face value anything that looks too good, or bad, to be true.  Seek out the facts before making the judgement.  And facts are not often found online chats.