If you even the tiniest interest in Ukraine and world geopolitics, there is a talk I would urge you to watch, which I listened to Thursday night.  The talk was presented by Thomas Hanson, a retired career U.S. foreign service officer, and is 1 1/2 illuminating hours.  The YouTube link is here.  The organization sponsoring the program is one I’ve long been part of.  Your choice.  Carve out the time.  You won’t regret it.  You won’t regret it.  Redundancy intended.

I would personally much prefer to imagine a world without war, and a gentle Spring.  Unfortunately, we live within imperfection and this Springtime has to be a time to be in touch with very real  imperfection and tragedy.  Keep informed.

Sunday morning at 10:33 a.m. Spring arrives in my city.  We’re at about 45 degrees N latitude, which means that our counterpart in the Southern Hemisphere is entering the first day of Fall.

Across the sea, in Ukraine, the territory between Odessa and Kyvv is about the same latitude and geographic location as the area between my Twin Cities and Winnipeg.  Which is to say, if you live here, you could be living there, in terms of usual weather patterns.  The midwest and southern Manitoba and Saskatchewan was  a hospitable new home for tens of thousands of “Germans from Russia” who in the early 1900s found themselves no longer welcome in then-Russia.

Spring to me, this year, is the blackboard at the coffee shop, which I see most every day. 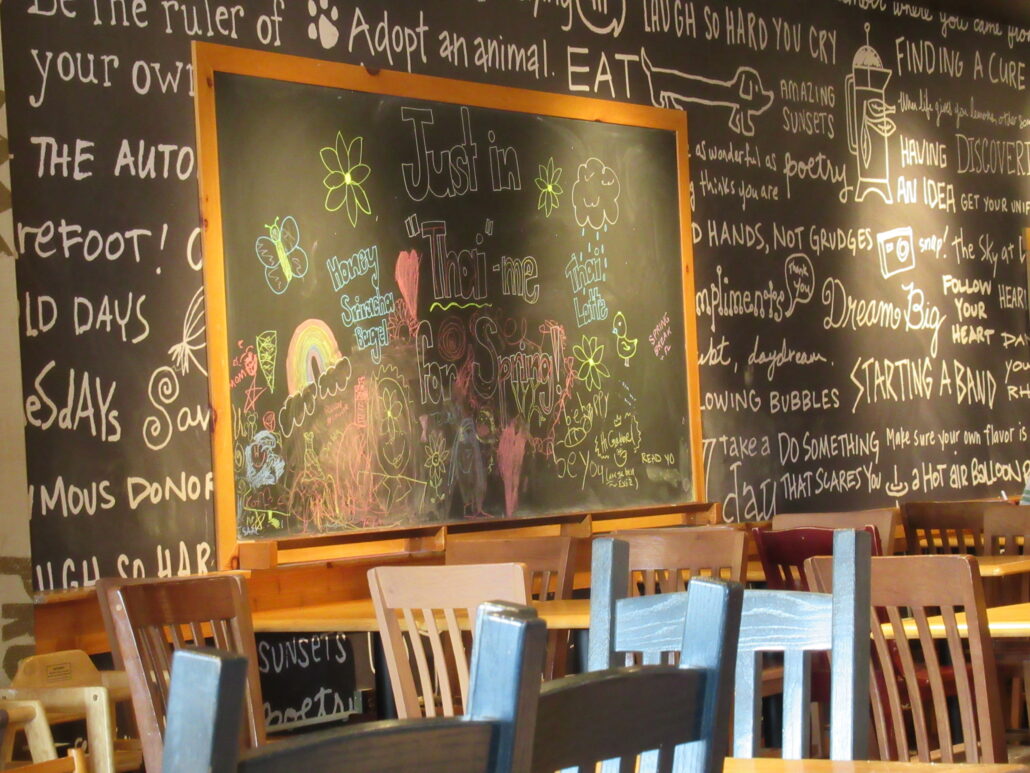 Nothing fancy, for sure, but colorful and personal.  Like spring is.

Everyone glancing at this post will have their own definition of Spring.  For me, “Spring” began on February 1 – it always does.  I figure January is the most difficult month, and while there is winter weather still ahead, it won’t last as long, nor be as difficult.

March can be counted on for some difficult snowfalls; it is later in April, when Spring begins to take root, so to speak, and usually later in May before there is reasonable assurance of no killing frost.  Spring is a fixed date, not a fixed event!

It is all variable, of course, but spring is a time of rebirth, and being outside is desirable.

I expect some springtime poetry from Molly, as for other seasons.  She sent her own list the first offering a few days ago, which I offer below with thanks.

This is a bit different from the usual bursts of poetry, as the offering includes just one poem,  just below my name.

I have always loved Aldo Leopold’s book A Sand County Almanac. In fact, in 1967, when I was at UW-Madison working on certification to be a biology teacher, I was lucky enough to be introduced to the book by a professor who had been a student of Leopold’s!

My favorite essay in the book is the one for this month, titled “March; the Geese Return.”  In fact, a few snow geese have been sighted here in MN, as have swans, eagles, various ducks, some sandhill cranes, and –today–a red-winged blackbird in the metro area. The 3rd week of March in MN is when the big flocks of geese usually start.

So, that essay is here: Leopold Geese Return . If you enjoy it, check out the book… Your library probably has it; the book will also probably include other Leopold essays, beyond those in the Almanac section, depending on the edition.

Blessings of the advancing season, & hugs, and keep your eyes and ears skyward…

To the Thawing Wind

Come with rain, O loud Southwester!
Bring the singer, bring the nester;
Give the buried flower a dream;
Make the settled snowbank steam;
Find the brown beneath the white;
But whate’er you do tonight,
Bathe my window, make it flow,
Melt it as the ice will go;
Melt the glass and leave the sticks
Like a hermit’s crucifix;
Burst into my narrow stall;
Swing the picture on the wall;
Run the rattling pages o’er;
Scatter poems on the floor;
Turn the poet out of door.

from Fred: This is a forward another reliable source of war news. It’ more analytic and really interesting. I’m going to send along a fairly new review of the tactical situation in Ukraine from the other source you’ve seen. At the link is a tactical and strategic summary of the Ukraine war so far, from a US website that is a pretty good source for military developments worldwide.  Although the editors have worked with the US armed services for years, particularly in the area of wargaming and simulations, they’re frequent and candid critics of Pentagon policies and practices.

Fred also passes along another interesting source of ongoing news about what is happening in Ukraine.

Bill B. sent the always interesting ISW daily update although there’s not too much action. As usual they cover the status in all parts of Ukraine and the Russian progress or lack thereof.
Be sure to check out Zelensky’s generous offer to Russian troops.
Bill also noted: “In Minnesota, spring road restrictions are going into force just now.  Paid a lot of attention to that when I was in DNR. Means mud season is on.  Probably the same in Ukraine.”
from Carol: “The Story of Fascism in Europe” by Rick Steves showing on ch. 2 [Twin Cities PBS] during Pledge Week.  It’s terrifying.  Dick: I think if you’re a member you can access this program on demand.  I have seen it more than once.  It is very much worth your time.  We need to be reminded of this ugliness now and then.
from Paul: Mir in Russian [see below], it was so important to them after their WW2 experience. I thought maybe Macron might help hear what he said and advise something to Mr. Putin, and Putin has apparently said the fall of Communism was one of the greatest tragedies in the world, and it looks like he’d like to restore the larger sphere of influence of Russia when it included other Soviet countries. Ukraine may have been one then. Moldova, Belarus and other places may have been part of the larger Soviet Union as well. His way of restoring it militarily is pretty bloody so far, since Ukraine has had a taste of freedom.  [Mir, per google: “For a Russian, the word “Mir” holds meaning, feeling, and history. It is sometimes translated into English as “world,” or as “peace,” or as “village,” but a single-word translation misses its full significance.”]
https://thoughtstowardsabetterworld.org/wp-content/uploads/2022/04/thoughts-300x138-1.jpg 0 0 dickbernard https://thoughtstowardsabetterworld.org/wp-content/uploads/2022/04/thoughts-300x138-1.jpg dickbernard2022-03-19 09:49:132022-03-21 13:51:53Printemps (Springtime)
4 replies