This afternoon Judge Ketanji Brown Jackson made her debut to be “the first Black woman to be put forward as a justice.”

Judge Jackson has been confirmed at least twice for other positions by this same Senate Committee.  Watch for the strutting of the opposition as the questioning goes on this week.

If confirmed, as I think she will be, she will be the first ever African-American woman on the high court.  Historically this demographic has gotten short shrift.  Black men became eligible to vote and hold office long before women generally were granted suffrage in 1920.

Black women have arrived, particularly in recent years.  They are visible and they are active and they have waited far too long, in my opinion, for equality, however that word is defined.

Last Sunday, enroute home from church, I took a drive past the vacant block which once held several minority owned businesses, including GandhiMahal, owned by my friend Ruhel Islam.

The block was burned to the ground two years ago, a few days after the George Floyd murder not far away on May 25, 2020.  To my knowledge, no one has been charged in the arson case which took out all of the businesses on the block, including the U.S. Post Office on the corner.

The next week, June 1, 2020, the then-President of the U.S. took advantage of the tragedy with a photo with a Bible at the church across the street from the White House….

Sunday, there wasn’t much point in taking a photo of a vacant lot at the beginning of spring in Minneapolis.

Across Lake Street remains a badly damaged building, still standing, but un-rehabilitated for some reason or another.  I will not get into speculating.  The last week of May 2020 was a major catastrophe for south Minneapolis, and reconstruction takes time and is never easy.

I noticed at the building, street art remaining intact from two years ago, and in particular noted the top line of text, below: (“The arc of the moral universe is long, but it bends toward justice.”) 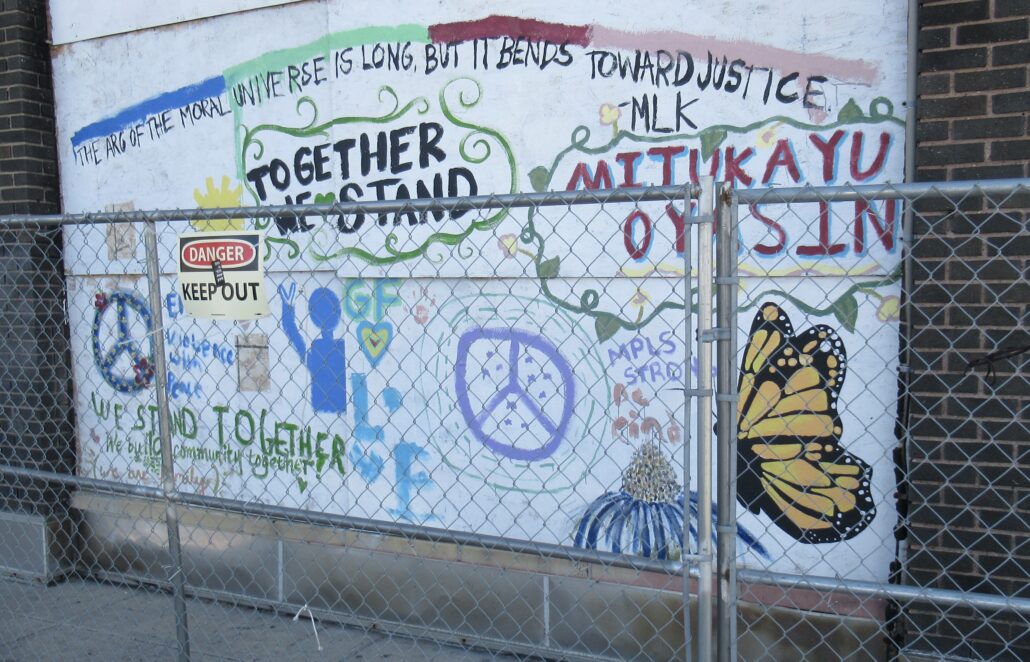 March 26, 2022: I managed to watch portions of the hearings.  I didn’t make it a priority.  It is important for the combatants, perhaps, but mostly it is the Senate’s version of street theater…and not very good theater at that.  Much of the bluster will show up in election advertising back home in coming months and years.  “Made for TV” sound bites.

I’m not a lawyer, but in my work years my normal duty involved working with, against and around lawyers.  I know how the Law operates.

My criteria for judging the outcome of a case was whether or not the ruling made sense.  Usually, it did.  Probably it still does.

(The 2022 Senate Judiciary Committee has 22 members, half Democrat, half Republican.  15 of the 22, 8 Democrat, 7 Republican, are lawyers by training.  18 of the 22 are men; only one of these is non-white; 10 of the 11 Republicans are white men, etc. The Democrat side better reflects America, in my opinion.  Here’s the Senate data, covering our entire history of 235 years.)

Ketanji Brown Jackson deserves appointment.  In normal times – say 20 years ago – there would be no question about the outcome.  These are not normal times.

During the week I called up data on the votes on justices for the Supreme Court.  This is from the Senate website.  The chart is worth your time.

Of course, Judge Jackson, if appointed to the Supreme Court, will be the first African-American woman ever to become a justice on the Supreme Court.  The overwhelming number of justices over history have been White Men.

Judge Brown Jackson is making good history, regardless of the final vote.  People in power normally don’t give up any of their power voluntarily.  Change is happening, albeit slowly, but change is happening.  Our country will be be the better for this.

from Joyce: an on-point commentary by Heather Cox Richardson.