Pre-Note: The last week has been occupied.  As regular readers know.  I was hospitalized for major surgery.  Surgery last Friday was successful; came home Wednesday; now spending my time resting and regrouping.  Questions?  Ask.  I’ll reflect on my experience at this space in a few days.

Meanwhile, the assault on the senses on the TV screen was Vladimir Putin playing emperor of a world no longer existing.  My comment on the Ukraine situation is to see in my mind the grotesquely long table in the Kremlin, with Putin at one end, and somebody else at the other end.  Horrible but accurate visual.  It says Pathetic, not Imperial.

(Ukraine is about the size of Texas; Texas has a little more than half Ukraine’s population.  Previous post here.)

There are tens of thousands of highly informed and expert people giving conflicting advice all over the planet, no less so here.  Messy as our world is, it is our world.  It is no longer one country, one empire or another.  The past is passed, though some like to live in it.  There’s lots of work being done behind the scenes.  Be informed.  Don’t panic.  Sends LOTS of positive thoughts to the Ukrainian people.  We can only imagine.

DR. PAUL FARMER:  I’ve had a fair number of years on the planet, and some months ago I started a list of people I consider “heroes”.  Most of them wouldn’t consider themselves heroes, but that is what they are: ordinary people who inspire me.

Paul Farmer is one of these.

Most recently we watched, and I highly recommend, the Netflix film “Bending the Arc“, essentially about Paul Farmers life and work.  It is perfect for this moment in time.

For the moment, it is best to leave the eulogies to people who knew best.  I’d recommend reading the Partners in Health link.

I learned of his death in my own hospital bed on Monday when my wife noted seeing the obit in the Minneapolis Star Tribune.  Here it is: Paul Farmer.

Personally I learned of Dr. Farmer’s work through the Tracy Kidder book “Mountains Beyond Mountains“.  I was introduced to it by Paul Miller who was preparing several of us for a memorable trip to Haiti in December 2003.  (Michelle Karshan, mentioned in the STrib obit, is one of the people we met on that trip.)

In 2006 we went again to Haiti, and this time visited Cange, Haiti, Farmers flagship, as well as a new satellite community clinic, and a conversation with a women’s group of AIDs survivors. in a rural village in the vicinity of Ench (Hinche) in the interior.  Success comes in small steps, and we were witness to a small part of that.  We Americans cannot imagine how good we have it when we come to general access to health care, period.

A few years later, In 2013, I had the privilege of hearing Dr. Farmer speak in person at the Nobel Peace Prize Festival at Augsburg University in Minneapolis.  Afterwards many of us stayed in line for hours to have an opportunity to greet him personally.  This was an atypical book signing, which started after his talk.  He gave each of us whatever time we desired to interact with him.  It was probably midnight when I finally reached him.  I was near the end of the line.  I don’t know how long I talked but I’d guess it was like everyone else, minutes not seconds, regardless of age or importance.  We waited our turn.

Here are two photos from that memorable evening – standing in a line that I will never forget. 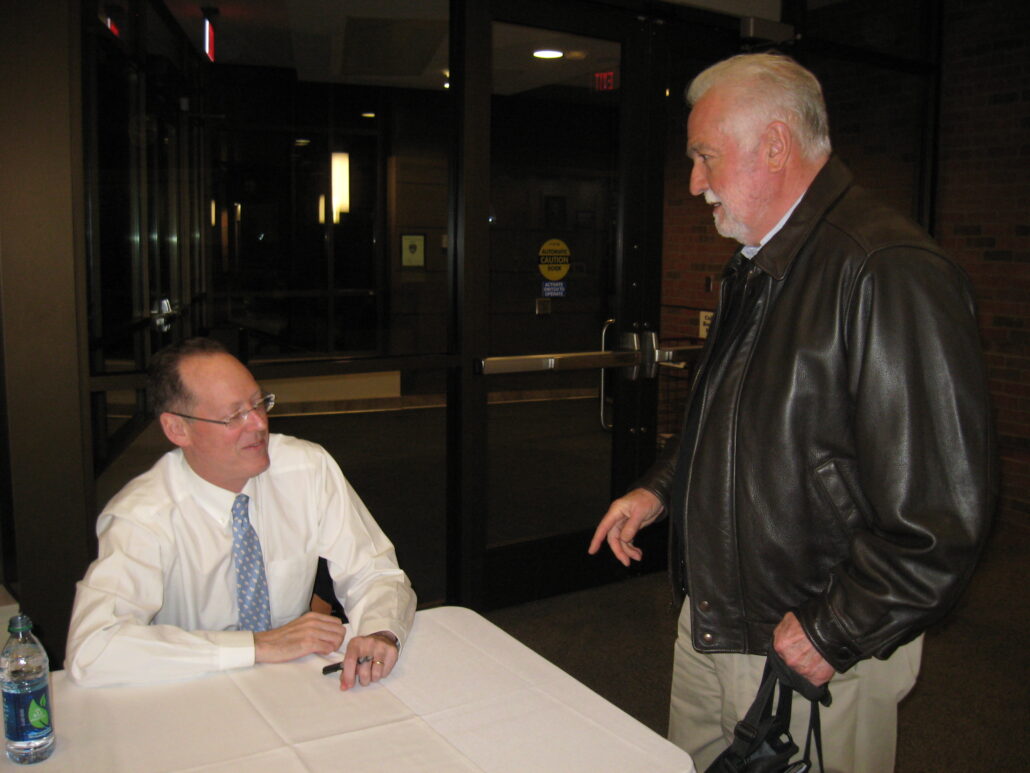 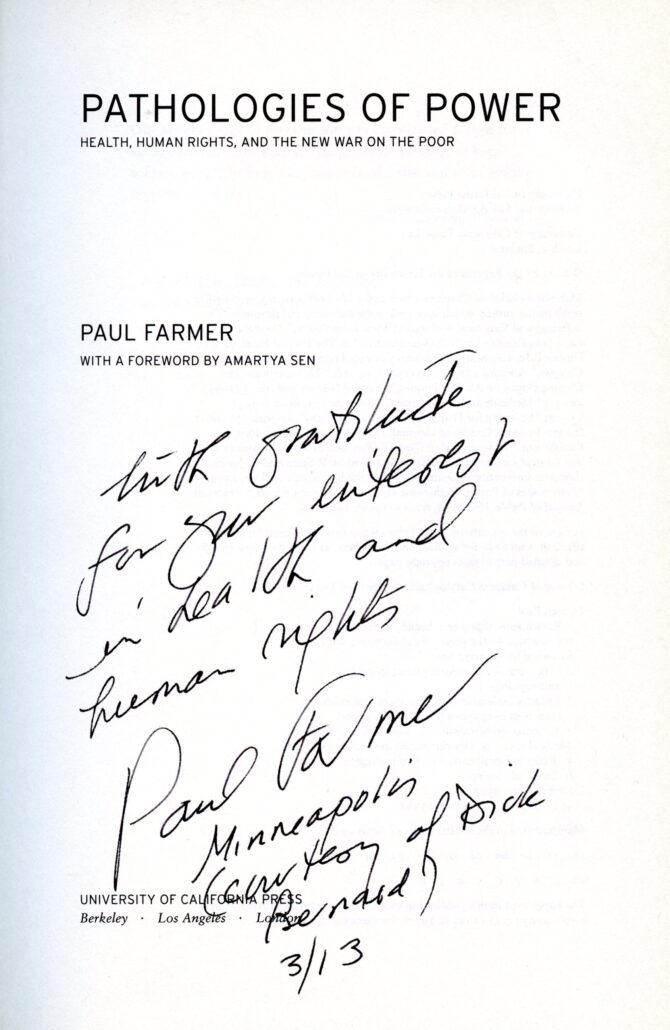 The autograph: “With gratitude for your interest in health and human rights” Paul Farmer

from Chuck: A hero of mine too!  I only met him twice…but those short minutes led me to believe he was the second coming!

from Carole: broken hearted about the death of Paul Farmer, my hero too.

from Nancy:  Amy Goodman’s blog about Paul Farmer is here

from Jermitt: I’m pleased your surgery went well.  Yes, we lost another wonderful person, Paul Farmer.  HIs life’s work saved many lives.  He too, would be saddened by the conflict by Putin’s cold heart.  Thanks for your post, Dick.  As always, I greatly appreciate your thoughts and opinions.

from Jane: Tragic news about Paul.

response from Dick: My oldest son is near Paul’s age, and recently a friend’s son and another’s son-in-law died at 59. It reminds me of a funeral over 40 years ago where a teacher was killed in a car accident taking students to Boys Nation.  The teacher was probably in his 40s.  The pastor eulogized the teacher simply: “Myron lived before he died, and he died before he was finished….”  He admonished all of us to live life while we can.  Today is all we have….

from David: Glad to hear that everything went well and that you are at home. Doubly glad that the prognosis seems very positive at this early stage. While we may legitimately complain about the cost and inequity of our health-care system, the skill and caring of the people delivering care is truly amazing—from the doctors all the way to the people who pop into the hospital room to tidy up.

Be a patient patient. Don’t push things, listen to the pros, including your wife. Looking forward to your return to Caribou.

from Jane: Remember that Crossing Boundaries  show in 1995 was at the Ukrainian American Center?  [A cross-cultural event in which I was involved.]

response from Dick: Yes.  This is definitely a lose-lose for Putin and all of us.  I have no idea what things will look like a week or month from now, but it certainly won’t be over if the Russians take over.  I can guarantee that the Ukrainian community here and everywhere LOTS of Ukrainians in Manitoba are having lots of meetings.

from David: So glad you are well Dick. Dr. Farmer’s loss is a shock.

from Bob and Deann: We are grateful to learn you are recovering well.

from Hector: I’m so glad to hear you are recovering nicely. Thanks also for this post on Dr Farmer. I am looking forward to watching the video. Our church supports an orphanage there. Thank heavens there are people like him helping that desperate country.

from Brian:  That’s a wonderful piece, thanks for sharing!

So sorry to hear about your major surgery. Glad you got out quickly, hope the resting and regrouping leads to a rapid recovery.
Kenbe fem, Brian

from Maria: Happy to know you are already back home after surgery. I was on PBS evening news when Judy Woodruff announced the death of Dr. Paul Farmer, and my heart jolted. A beautiful presentation of his life and work with ‘Partners in Health’ followed, complemented by pictures. I have the habit to take significant pictures from TV. I will try to send you some, one splendid!

Dick: Here are some screen shots of the PBS News Hour sent by Maria.  Maria was part of the group we were with when we visited Cange and other places associated with Dr. Farmers work in 2006.   I was doing video of the trip, but I just couldn’t turn on the camera in the hospital area.  It was too difficult, emotionally: patients young and old, were standing quietly in line for perhaps only a single visit with a medical professional, and had travelled a long way to even get to the clinic.  There are a flood of visual images of that few hours at Cange.  Perhaps I’ll add some later.  Here’s some of Maria’s screen shots thanks to PBS, no id provided.  Dr. Farmers main focus countries seemed to be Haiti and Rwanda, which is where he died: 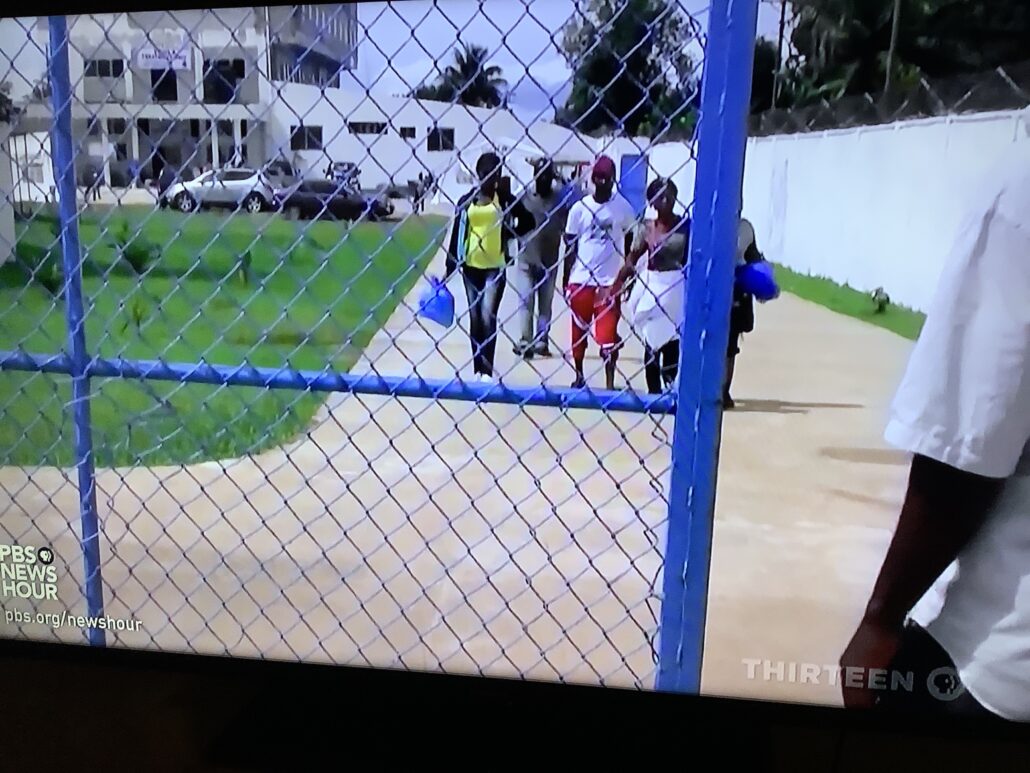 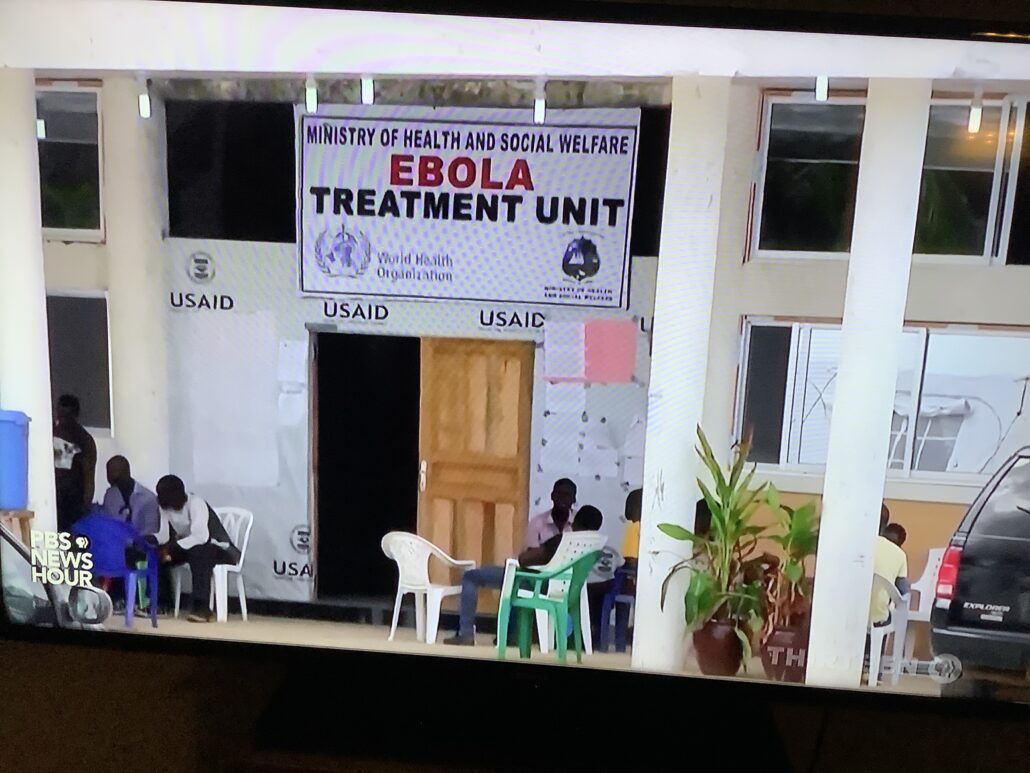 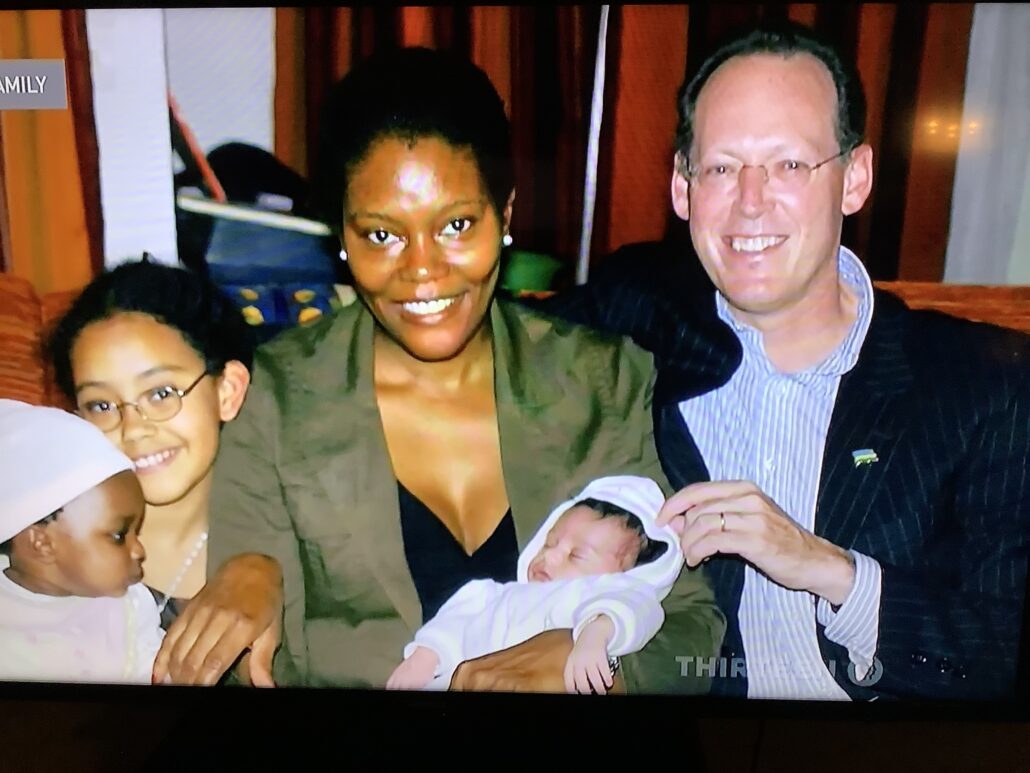 I believe the above photo is Paul Farmer and his family.

from Jim and Priscilla: So glad to hear that surgery went well.  Take care and heal up fast!

from Jay: I am thankful your surgery has been successful. We need you to get back to your good work of promoting and urging peaceful coexistence.

from Mary: Sad about Paul Farmer’s untimely death but we should all leave even a fraction of his legacy.  Sometimes the type of work he was involved in was pretty unappreciated and misunderstood and it takes strong commitment to make it possible.

from Suzanne: Glad to read that all went well with your surgery, and that you are on the road to recovery. Incredibly tragic news regarding Dr. Paul Farmer. With regard to the above post, I will make a donation to Partners In Health.

from Bruce: Dick, glad to hear of your successful surgery and sending positive thoughts for a quick healing process.  I read Dr. Farmer’s book many years ago and also have much admiration for his courage and commitment.

from Rebecca: Dick: Glad you are home and getting your strength back. Yes, what a shock –Paul Farmer dead such a young age. His legacy for humanity is huge; his legacy for Haiti so poignant–we must keep going to lift up Haiti. Thanks for all you do.

from Judy:  Dick, so pleased for your successful surgery….but I send my tender care for the loss of your friend.  God’s blessings,