PRE-NOTE: February 27, 2022: Much has happened since this post was published Feb. 16.  Here is the Ukrainian National Anthem, in solidarity.  Related post here.  Moving speech by President Zalinsky to his colleagues in Europe, here.

I have had two subsequent blogs on the topic: here and here. 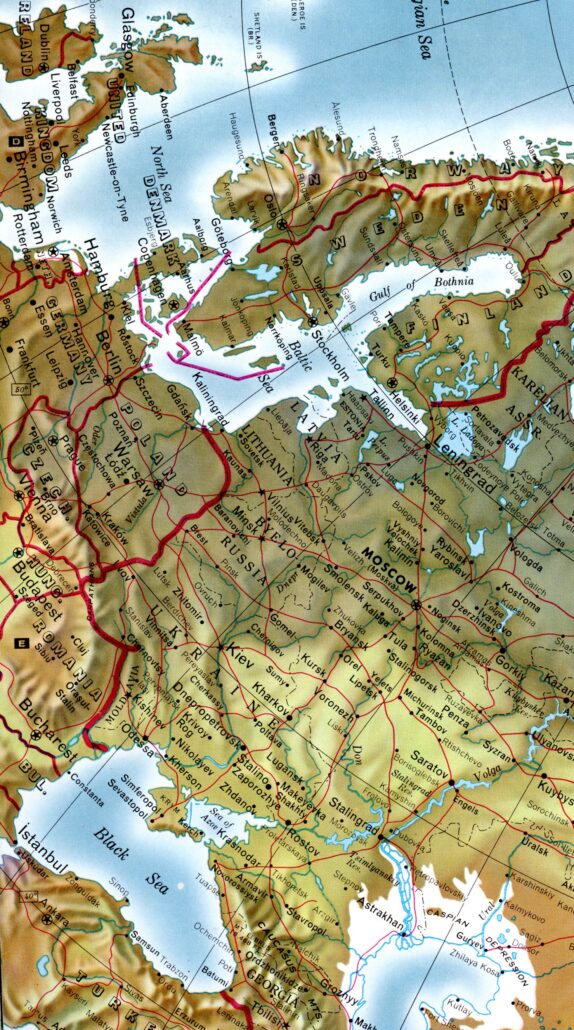 I decided to use my 1961 Life Atlas to pinpoint Ukraine, Kiev and Moscow, because in 1961 Ukraine was part of the USSR, until the breakup about 1989. This might help define this particular time of grievance – not justifying it, but at least identifying it. The map quoted is on page 326 of this Atlas, which I bought when I was in the U.S. Army

Today is supposed to be the shock and awe day in Ukraine, when the Russians invade.  Maybe diplomacy worked.  I don’t know. It’s 6:05 a.m. here; 2:05 p.m. in Kyiv.  I haven’t looked at the morning news here or the morning paper so I don’t know what has actually or will happen.  It is mindful of March, 2003, and our own shock and awe event in Iraq over supposed weapons of mass destruction and Saddam Hussein.    It’s mindful of Pearl Harbor Dec. 7 1941.  It was 8 a.m. there; afternoon the same day, here.  Calendars and clocks can be tricky when reporting global news.  I don’t minimize the issue:  big boys with lots of “power” and expensive toys and all the rest of the ingredients necessary for war make this another dangerous time in world history.

Will we ever learn?  All I can offer is this note at this time of my day in Minnesota USA.

Possibly there might be someone out there who takes at face value the narrative about Ukraine-Russia-the U.S.- NATO.   I would guess (that’s all someone like myself can do) that all parties in control on all sides have a pretty good idea of the final outcome.  In this high tech era, I’d be shocked if they didn’t know all of each others secrets, and that high level diplomacy won’t resolve the issues.  Nonetheless, war or threat of war, or an enemy, is very helpful politically no matter the country or the system or the time in history.  Chris Hedges War Is A Force That Gives Us Meaning (2002) always comes to mind at times like this.  This came along about the time of our Iraq misadventure – a solution to 9-11-01.  War is Good…not, but yes…it is useful to politicians currying favor with people like US.

Just in my own life experience, I’ve been old enough to hear about testing of new and ever deadlier bombs; the ever-present Commies; etc.  My headline, “Preparedness“, is actually a word, rooted in military might.  (I looked it up to make sure it even was a word.)

Early in the Fall of 1957, October 4 – I was a senior in high school, Dwight Eisenhower was President – the Soviets announced the launching of Sputnik, a beach-ball sized satellite orbiting the earth.  A month or so later, a second, larger, Sputnik was launched, carrying the first space passenger, the famous but unfortunate dog, Laika.  And later a third still larger Sputnik.  The U.S. couldn’t get in orbit, and thus the space race began.

It only took the first Sputnik, which I actually saw blinking across a brilliantly dark night sky above my grandparents farm, to start the space race.  That first one was tracked and publicized in the newspapers.  We knew where to look.

While the Cold War had been background noise in life since the end of WWII, actually getting something into orbit, albeit only a short time, set off the alarm bells.

In the farm junk several years ago, I found a 46 page booklet, published in 1961, that gave helpful tips for surviving a nuclear blast, even on the farm.  It was published by the Department of Defense, Office of Civil Defense, and was serious business.  I’ve included four random pages to give an idea of its contents.  I would guess every adult saw this, and paid attention. 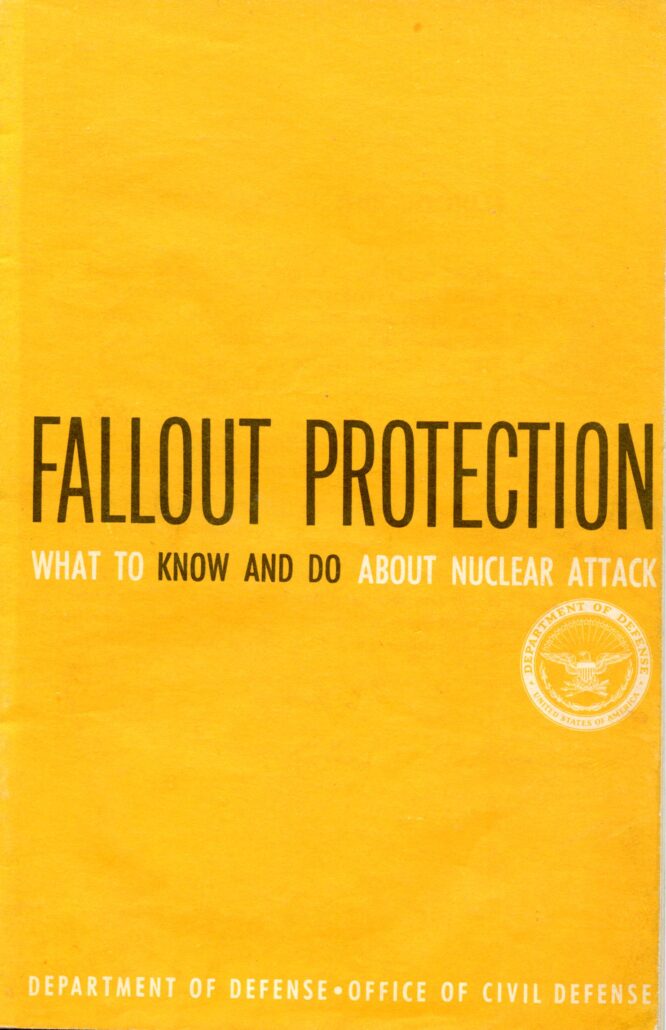 Dec. 1961 happens to be the month I graduated from College.  The next month I was in the Army, and in October of 1962 we soldiers were mobilized in case the Cuban Missile Crisis would be trouble.  It was a serious problem, but ultimately resolved by diplomacy at the highest levels.  There are books about this.  For we soldiers, it meant some days of hurry up and wait.  Cheyenne Mountain Colorado – a prime target – was the landmark we woke up to each day. 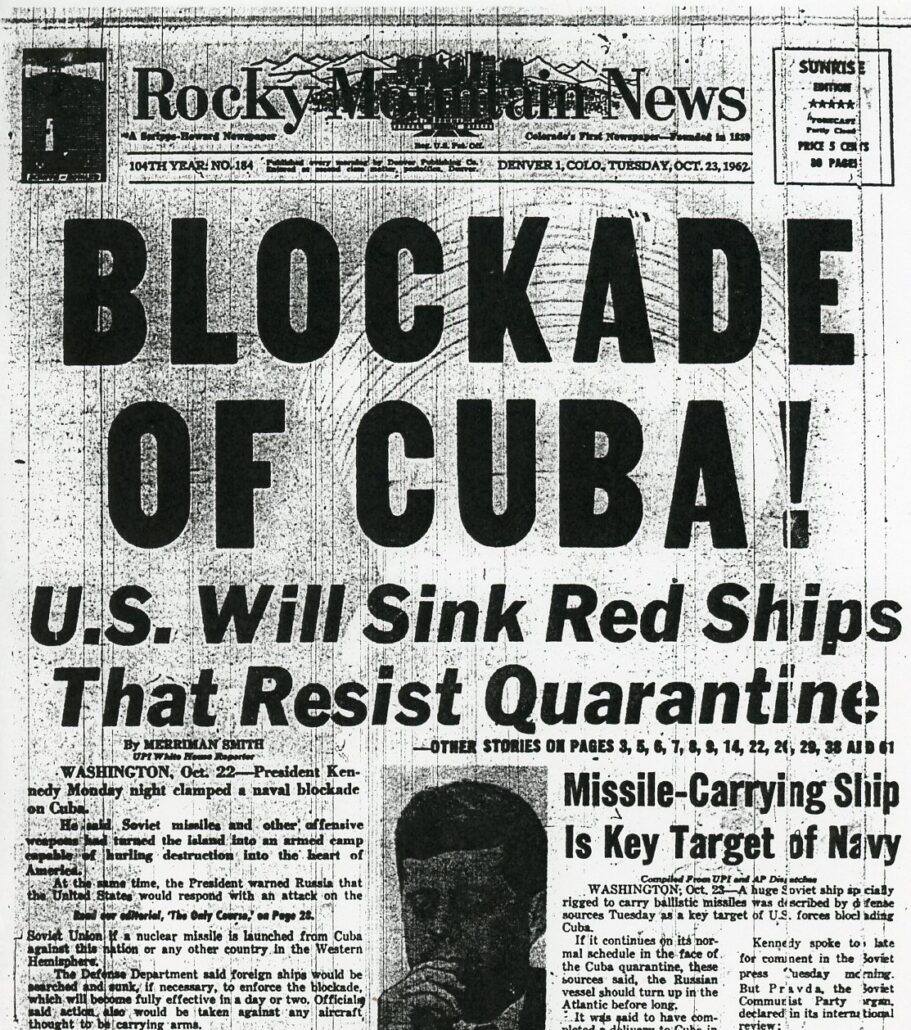 So…We’re in it again.  Nowadays, of course, the weapons of communications and implementation of disaster have changed, and they are worse than in the olden days of simply blowing somebody to hell and solving nothing in the long term.

We seem to choose not to learn.

Today the word is Cyber, and the media is another potent weapon to sew fear and dissension.  Somebody has to be blamed.  The world has no borders: note the Covid-19 Pandemic, diminishing to potentially Endemic after two long years – sort of like a permanent hurricane downgrading to a tropical storm, doubtless to be followed by similar events down the road.

We can’t evade this stuff.

But we are the ones – you and me – who can make for a better or worse future: a future we’re stuck with…together.

As I said at the beginning, I don’t know what happened overnight in the Ukraine area.  I’m sure I’ll read and see all about it shortly.

Today begins my own adventure towards surgery on Friday, so likely this space will go dark for awhile.  Plans are to be back on screen in a few weeks, or maybe even earlier.  If interested in my status, check beginning this weekend at Caring Bridge, Dick Bernard-MN.

from Jay: The following from FAIR is the most accurate report on the Ukraine crisis I have seen: here

from Greg:  So it is Friday evening in October 1957 and I am watching TV in downtown South St Paul when a news bulletin interrupted whatever I was watching to inform that Sputnik had been launched.  The rest, as they say, is history.

I will be praying for you for success Friday, my Friend! God bless you, and your anesthesiologist!

from SAK:  Thanks for that Mr Bernard & hope all is & will be well with you!Attached, I just rotated the nice map you sent & highlighted some places that are being mentioned in the news.

Minsk is the capital of Belarus where manoeuvres are taking place.

Krym is Russian for Crimea.

Lugansk is in Eastern Ukraine & is currently not ruled by Kiev – Russia supports the “rebels” there.

Stalingrad was the location of one of WWII’s largest sieges by the German army (along with Leningrad) & battles. Renamed Volgograd in 1961.

Kursk is where the largest tank battle (in history?) took place between Germany & the USSR.

I am reminded of how Germany before WWII said that Czechoslovakia was like a dagger into the German belly & later attacked & captured the Sudetenland – similarly Russians can say the same of Ukraine.

Sooner or later these things end badly unless sense prevails. There is hope. 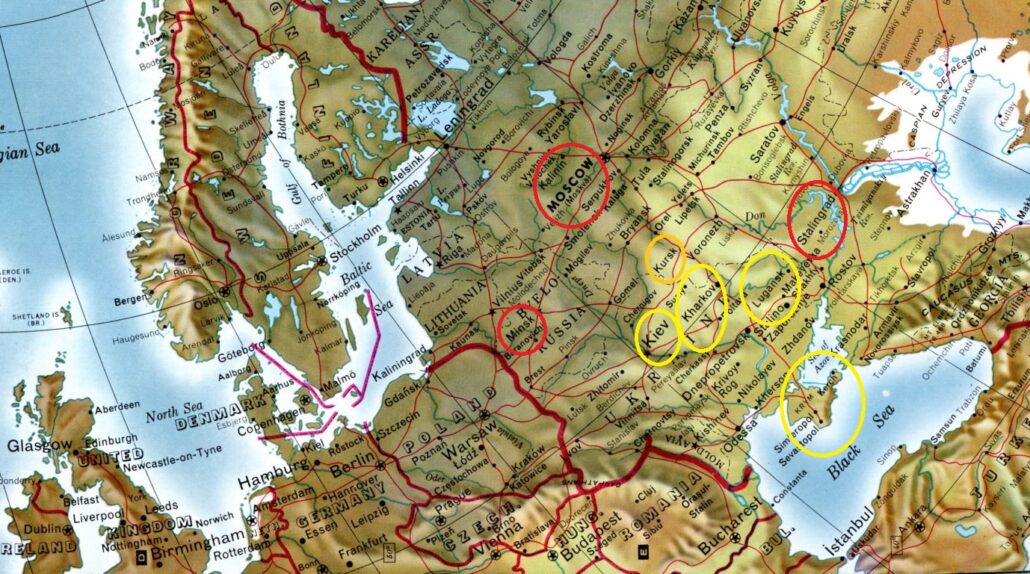 from Jermitt: I want to wish you a quick recovery from your surgery tomorrow.  I greatly appreciate your position on war and peace.    Your attitude toward war is similar to mine.  I have to be hopeful that war in Europe is avoided once again,