Some thoughts ending another  week full of breaking news….

Directly related post on the Feb. 1 Precinct Caucuses is here.  Ours will be virtual – I’m signed up.  More, after the caucus.

Last week was the one-year anniversary of our outstanding President, Joe Biden.  Heather Cox Richardson summarized President Biden’s year here.   The column is well worth your reading time.  Here’s another from Richardson, Jan 27.

Then, yesterday, President Biden made this statement as part of his remarks on the upcoming retirement of Supreme Court Justice Stephen Breyer: “While I’ve been studying candidates’ backgrounds and writings, I’ve made no decisions except one: The person I will nominate will be someone with extraordinary qualifications, character, experience, and integrity, and that person will be the first Black woman ever nominated to the United States Supreme Court“.  More later from me on this.

Of course, there are differences of opinion.  I don’t need to elaborate.  At the end of this post I’ll share some thoughts about the insanity and destructiveness of today’s brand of political ‘competition’, but first….

Three doctors from Partners in Health (PIH) wrote recently about seven myths of Omicron.  What is Partners in Health?  A recent very interesting documentary, Bending the Arc, tells the story, available on Netflix.  Partners in Health website is here.  We visited the PIH flagship facility in Cange, Haiti, in 2006, as well as one of its rural clinics, and a women’s support group.    The film is long, nearly two engaging hours.  We watched it and it is very much reality based.  Succinctly, the average American cannot imagine what we take for granted in the area of health care.  Everyone deserves the same, for our mutual benefit.

Thursday, Jan 27, was Holocaust Remembrance Day.  Never forget.  Here is what the the Holocaust Memorial Museum in Washington, D.C. had to say.

Apparently, another Netflix film is breaking records.  It is “Don’t Look Up“ (released 2021), described here.  I have not yet viewed the film, but plan to.  It is sci fi, but what I’ve heard so far is that it is very thought-provoking, generally focused on the tendency to deny reality.  The preview is available on YouTube.  Someone who’s seen it told me not to forget the two add-on scenes at the very end of the film.)

Post note 10:30 p.m. Friday: Watched the film including two end segments and found it very thought provoking.  (See John’s comment at the end of this post: Regarding “Don’t Look Up” – yes stay all the way through the credits. It’s incorrectly billed as a science-fiction drama – it’s more like a current events quasi comedic documentary“.)

Louie Anderson, a true Minnesota treasure, died recently, and merited a tribute from Minneapolis Star Tribune movie critic Neal Justin.  Anderson grew up a few miles from where I type. He catapulted to stardom on Johnny Carson; the Nov. 20, 1984, clip is easily accessible on YouTube.  Here’s to Louie, from Neal: 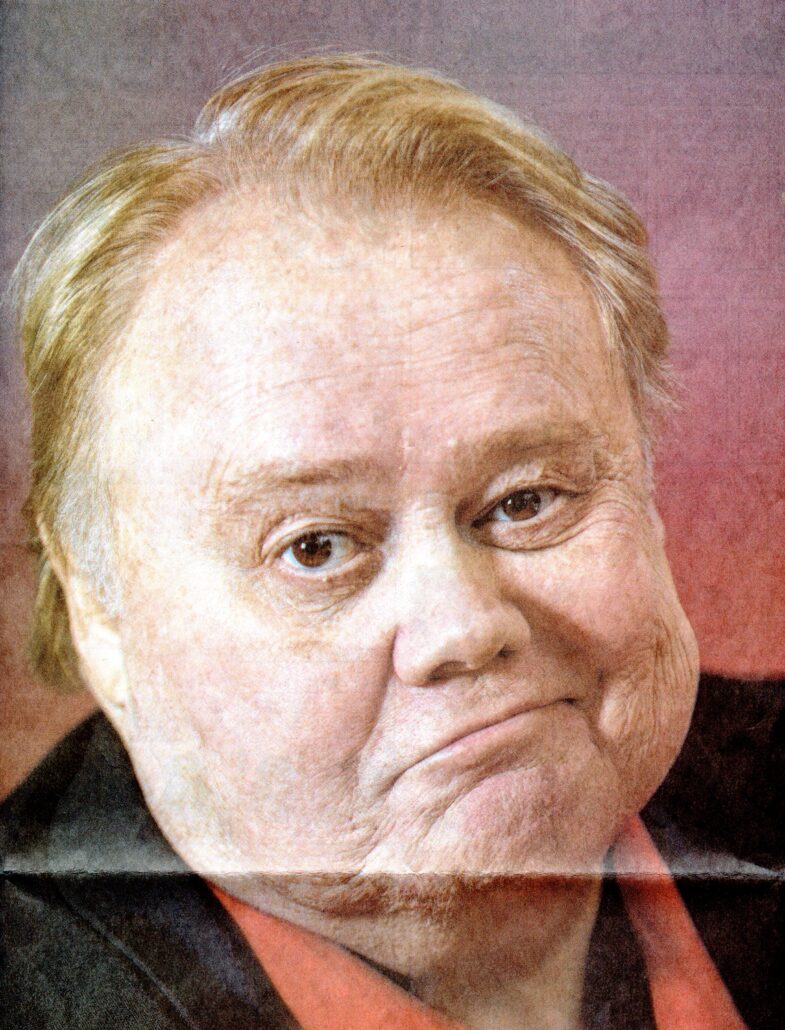 And Molly sent a delightful 33 second song about mid-continent winter, here.  She lives in another suburb of St. Paul, and I affirm what she said about weather, here, on Jan. 25: “…this 33-second piece was actually posted on our church’s web page today. The forecast says -20 for tonight (and that’s before the wind-chill factor…), & it was  -17 or so last night…”

The American political system – probably democracy generally – has always been based on competition, often nasty.  We consider ourselves winners (“exceptional” among the nations), though we now are in the process of destroying ourselves from the inside – competition run amuck.

This is not a matter of “they’re all alike”.  Of the two major parties in this country, one is still attempting to work together – the Democratic Party; the other is absolutely committed to permanently disabling the other – a “fool’s errand” – another topic for another time….  Try thinking of the body politic – us – as a real body.  What is gained by permanently disabling one side, versus the other?  Nothing.  Most all of us can prove this by simply reviewing our own life experience.  We need each other.

As life happens, I spent 30 years of my work career – 27 of those full-time – representing school teachers in a state which had collective bargaining, and two competing teacher unions, which ultimately merged two years before I retired, 22 years ago.

Last year I spent some time recalling those work years.  In case you might be interested, you can find brief recollections here; the most relevant pages are in the reminiscences pp 12-14.

Personal observation: it made not much difference whether the local was large, or tiny.  Division contributed more to weakness than to strength.

Both sides had leaders.  If you won, your local leaders had the responsibility to represent everyone; if you lost, your main right was to criticize – you had no accountability.  There was much investment in proving one side was better than the other, but in numerous experiences on both sides for many years, there really was no genuine difference.  Both sides, both organizations, their members and leaders, did the best they could under the existing circumstances.  In one way or another, each squandered their power by internal competition.  No, this wasn’t dramatic, but it was evident.

I noticed a dynamic back then, and it made no difference which union was in charge, mine or the other.  There was a certain luxury in being out of power.  All you needed to do was complain that the majority wasn’t doing this, that or the other.

Ultimately, the state organizations merged, starting with one single large local organization where the last bargaining election had been decided by a single vote out of perhaps 1,000.   I was closer than most to this merger.  The main dynamic which changed after merger, was there no longer was a reason/excuse for one side to go in combat with the other.  Both were responsible for outcomes.  Folks finally decided to sail in the same boat, and the only choice they made was to what extent they participated individually in the solutions for the entire group.  Qualitatively, the unity system worked better than the division. Of course, it was never perfect, but it was much better.

On Activists and Activism: Some years after I retired, I went to an Awards program honoring a minister who was a great friend, and had been a campus minister during the turbulent times of the Vietnam War.

Verlyn mentioned something he had observed during those years as a Lutheran pastor on California campuses.  He estimated that perhaps 2% of the students he observed were what we have come to know as activists – shall we say, the ‘spear carriers’, the warriors, the leaders, in his case: peace (anti-war) activists.

The 2% was just a personal observation of his, but I have always resonated with it, from my working career, when I observed similar dynamics everywhere, including in my retired activist years.

It plays out in American national politics as well.  But this year, unlike any other in my long life experience, there is a stark choice to be made in November, and the sorting out begins, in my state, next Tuesday, Feb. 1.

One Party has decided to go for the kill – to render the other Party permanently impotent and thus irrelevant, by any and all means available.  This process began years ago, but has intensified.  The strategy may seem to work, but the success will be short lived, and everyone, including the so-called winners will suffer.

It’s up to you to be ‘on the court’ the coming months.  It’s your future….

from Joyce: I read this right after reading your latest email.