POSTNOTE Dec. 9, 2019: Last Thursday we went to the film starring Tom Hanks, “A Beautiful Day In The Neighborhood.  It is highly rated, deservedly so (I give it a “10”).  Early on, you learn that this is not what you expect a film about Mr. Rogers to be.  Early on, there is specific mention of “forgiveness“.  See the film, it will fill in the blanks.

The topic in the headline is addressed, briefly, below, beginning at “Back home….”  Between Thanksgiving and today, there is evidence that the threat is being activated; unrelated, but pertinent, my mac has auto-updated the new operating system – neither requested nor unusual.  I do not plan to change e-addresses; but e-mails for the time being will be infrequent.  Anything received that appears to be from me, should not be trusted on first glance.  This space is unrelated to the e-mails, and should be more trustworthy (though nothing is certain).

Give yourself a Christmas gift, and see the Neighborhood film.  It is a film with lessons for all of us, including myself.

This is written the eve of Advent.  The topic, Extortion, seems unlikely at this season.  But hopefully will make some sense at the end.

Thanksgiving Day was a delightful afternoon with family.

During the afternoon one of my grandkids, 17, was showing me a feature of her iPhone.  She had taken a photo of me, and she attached it to some other persons body, and it looked very real, and it was instant – the old photo shop on steroids.  Of course, it was amusing, but at the same time, scary.  If kids can do this, what about adults who are extremely savvy with technology?

The same afternoon, I had brought along a “real” camera – Grandpa’s box camera he had probably bought in 1910, and used until he died in 1967.  My son-in-laws had been kidding me about my regular camera, the ypte one rarely sees these days.  Here’s a photo of the old camera, the real deal, taken today: 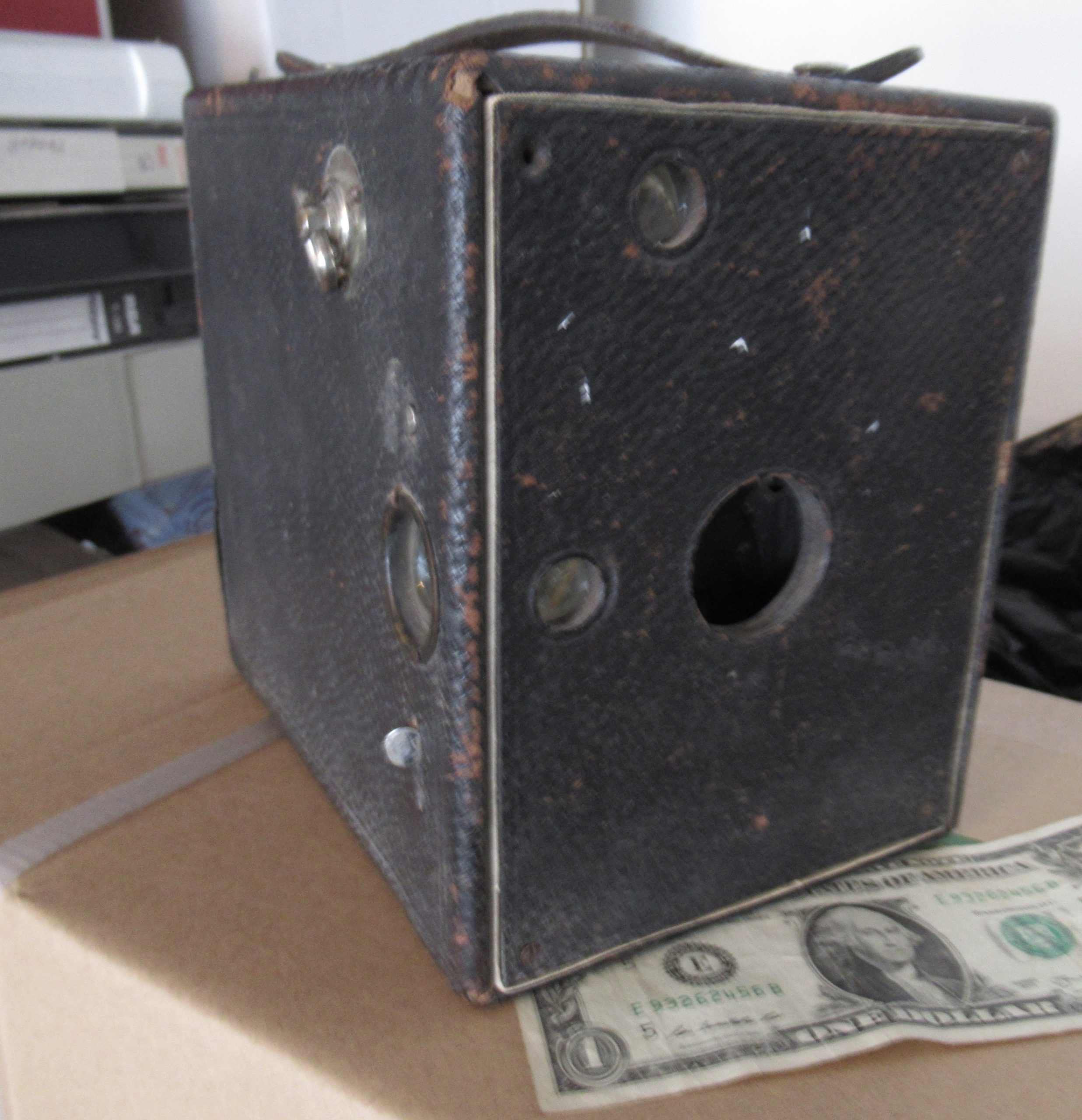 These old cameras were used with great care and discretion.  A roll of film might have eight exposures, and possibly one roll would be used in the course of an entire year.  There was one school picture a year, probably taken with a single camera; if family groups came together, maybe there was one photo.  You wouldn’t know how the pictures turned out until the roll was developed, often many months later.  Those single images made up the history of families, unlike today explosion of instant and careless photography that can be used and misused.

Back home, a few hours later, at home, separately, life changed instantly.  In came a piece of junk e-mail from someone I’d never heard of, from some other country.  This was a well-written business style letter, demanding several hundred dollars in bitcoins with a threat to send something to my entire e-list if I didn’t pay up in 50 hours.  It was a distinct threat.  I’ve had this happen once before.  I’m still piecing this together.  It appears that my computer was pirated and misused, including to tale a few seconds of film of me two or three years ago, taken without my permission.  They had activated the camera on my computer.  They apparently have been lurking quietly in the background somewhere in the world.  I had been hacked, I was told by the letter write, and apparently internet criminals have decided they can make a few bucks off of me.  I won’t pay them a nickel, and whatever the personal consequences of this piracy I will pay.  The perpetrators were and remain invisible.  The e-mail address was situated in Ukraine, but that’s all I can tell for certain.  These days you take nothing for granted, unless you actually know well the person(s) with whom you’re corresponding.

I take all the precautions but apparently they’re not enough.  No system is completely secure.  Things are getting worse and worse.  My e-mail account has apparently been compromised, and is apparently not remediable, so I’ll have to work around it for the time being.  What is regular for me, will no longer be regular.  I don’t relish this, but it is apparently necessary.

I’ve had e-mails supposedly from myself, including my correct e-mail address, which I didn’t write or send….  I don’t respond to any of these, but it is scary.  On the home telephone line, these days, come hundreds of spam phone calls, some of them, recently, using our name and home phone number as the originating number.  They’re mostly pitching insurance, and their content always identical.

I use e-mail a great deal.  The extortionist said they’d commandeered my e-mails and if I didn’t pay up, the humiliating film would be distributed to them all.   I shall see.  I’m doing what I can to stop this, but I will not succumb to threats.

The new technology is wonderful, but it has a very serious downside, and I am experiencing it as I write.  I want to publish this on the last day of November, so that I can have a fresh start in December, in Advent.

Grandpa Busch at center, with shotgun.  At left, his Dad; at right his younger brother.  1907, at the new farm in ND.