Today is Earth Day.  Of course, every day is earth day, and on and on, but we seem to have a need to name and date things.  The first Earth Day was 1970, or so says the official website.  Check it out.

1970 was over 50 years ago.  It surprised me to learn this, though I shouldn’t have been surprised.

Coincidentally, a few days ago I’d checked in with my friend, Bharat, about the Rio Earth Summit of 1992.  I knew he’d been there, and did he know any others from Minnesota who had attended.  I knew he’d met Arthur Kanegis there, and Joe Schwartzberg.  Bharat and I talked on the phone this morning, and there are some other names ‘rattling around’ as such things happen when you get older.  The brain is sort of like the Bingo cage, especially when you age: Every now and then you ask a question about something, it rattles around and possibly an answer comes out of your brain, maybe days later.  But you need to be patient.  And isn’t that what change is all about?  Change doesn’t happen instantly.

Today was really the appropriate day for the conversation.  The Rio Earth Summit was an initiative of the United Nations, and memorable.   Here’s a summary prepared a few months after the conference.

In 1992, I wasn’t engaged in the movement which I’ve come to identify as having four component parts: peace, justice, environmental sustainability and global cooperation.  Till 1992 I didn’t even know such a movement existed.  For me, my engagement began as an aftermath of 9-11-01.  For each of us, I reckon, there is a ‘trigger moment’, perhaps many, which move us in this direction or that.

Not long after 9-11-01 I got to know Bharat and Joe and many others in a still existing organization, the Minnesota Alliance of Peacemakers.

As Bharat and I were chatting this morning, I mentioned another person I met at the time, Hank Garwick, a retired engineer, who with his spouse, Dottie, were extraordinary activists and volunteers.   Their international passions seemed to be India and Haiti.  Here, they are in 2009. 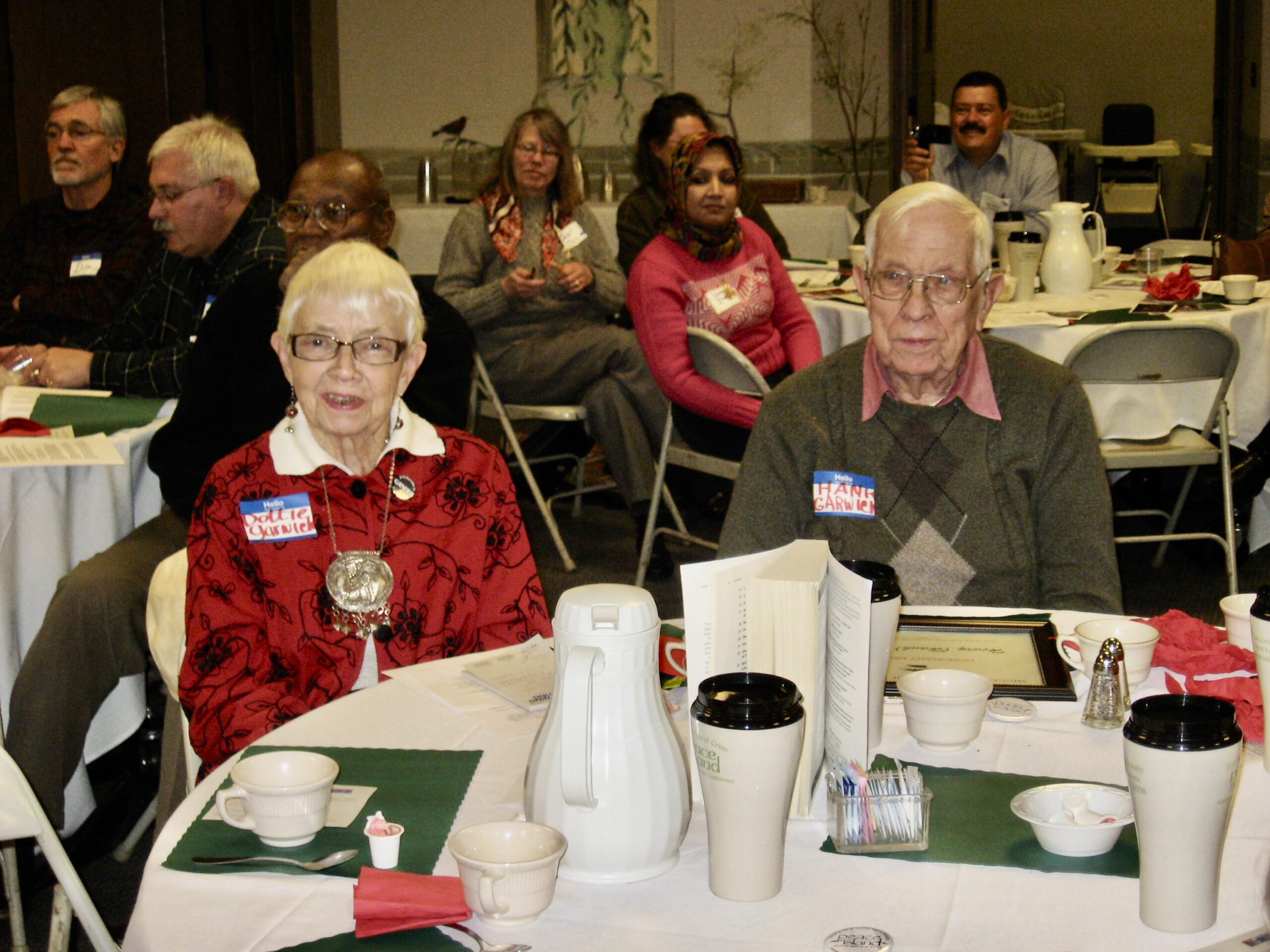 We humans, given a choice, are like the old saying: “birds of a feather flock together”.  So it is with the movement I consider myself part of, which focuses on issues related to peace, justice, sustainability and international issues.

We all pass on, it is inevitable.  So Hank and Dottie, in their quiet ways, were mentors for many.  Before them someone else gave the good example, and on and on.

The movement provided many mentors for myself – mostly by watching them work.  I was over 60 years old when I met the peace and justice folks, and they were mostly considerably older than myself.

Just this morning came a photo I hadn’t seen before of one of my heroes, Lynn Elling.  Lynn was 19 when I was born.  When he died, at 95, he’d had 9 years to teach me, and I’m grateful.  Yes, he could be exasperating – a hallmark of people with passion.  But a hero, nonetheless.  I remember him, and Joe Schwartzberg here. 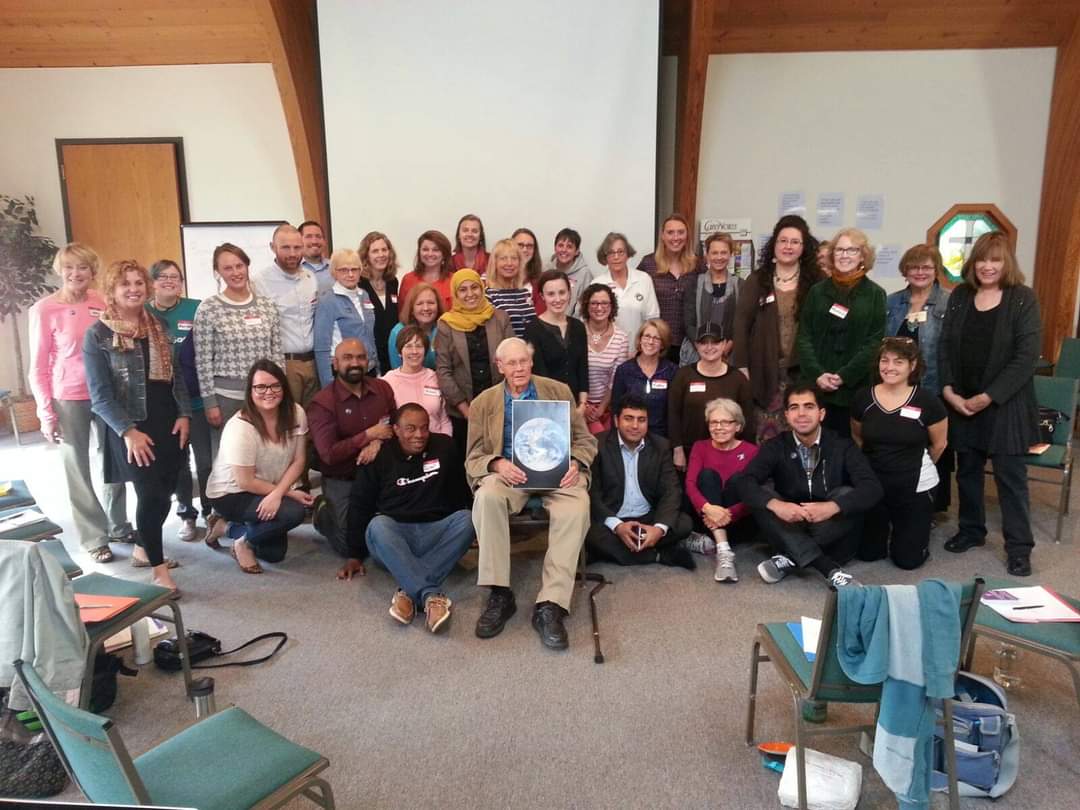 There are many, many stories within this movement.  One more, for the road:

Ten years ago Bharat invited me and several others to meet with Arthur Kanegis, who was in the process of making a film about the life of Garry Davis, who became a peace activist in his 20s, during WWII.  It’s working title “The World Is My Country”.

I’d never heard of Davis, or Kanegis, but was intrigued with what was presented at lunch, that late spring day in 2011 at the West Bank of the University of Minnesota.

A year later, with the film developing, I asked permission to show the draft to some high school students in St. Paul.  I wanted to see if kids could relate to an old man telling a story about his life as a peace activist.  Succinctly, their answer was “yes”.

In 2017, we world premiered the film here in Minneapolis; and this month, April 2021, more than 65 public television stations across the U.S. are airing the film.  It has arrived.

More information about the film, which is likely still available for preview on line, is at The World Is My Country.  Watch it yourself, and even better have a few kids watch it with you.

Bharat told me that he met Arthur Kanegis at the Earth Summit in Rio de Janeiro in 1992.  Very likely, Garry Davis was at the same convening.

Yes, Rio was just a conference many years ago attended by idealists who probably wondered whether it made any difference.  But the connection lives on, doubtless in many, many ways.

Speaking only for myself, I have observed, as one who didn’t have any idea that there was such a conference, I can say, absolutely, yes, Rio de Janeiro in 1992 did make a big difference.

A new generation now is in position to take the reins.  They’ll make mistakes like we did.  But they will build their worlds future.