Walter Mondale died on Sunday.  He’s a homie, and a small town boy like I am.  His trajectory was a bit more lofty than mine, and he will receive and deserve all the plaudits for a life very well lived.  I can recall meeting him a single time, a few years ago.

“Back in the day”, in 1987, my Dad moved to a retirement home in suburban St. Louis, on the bluff above E. St. Louis. Illinois.  To get to St. Louis, one went through E. St. Louis, then very much down on its heels.  More than once I saw a political sign on a building, and it comes to mind this day: 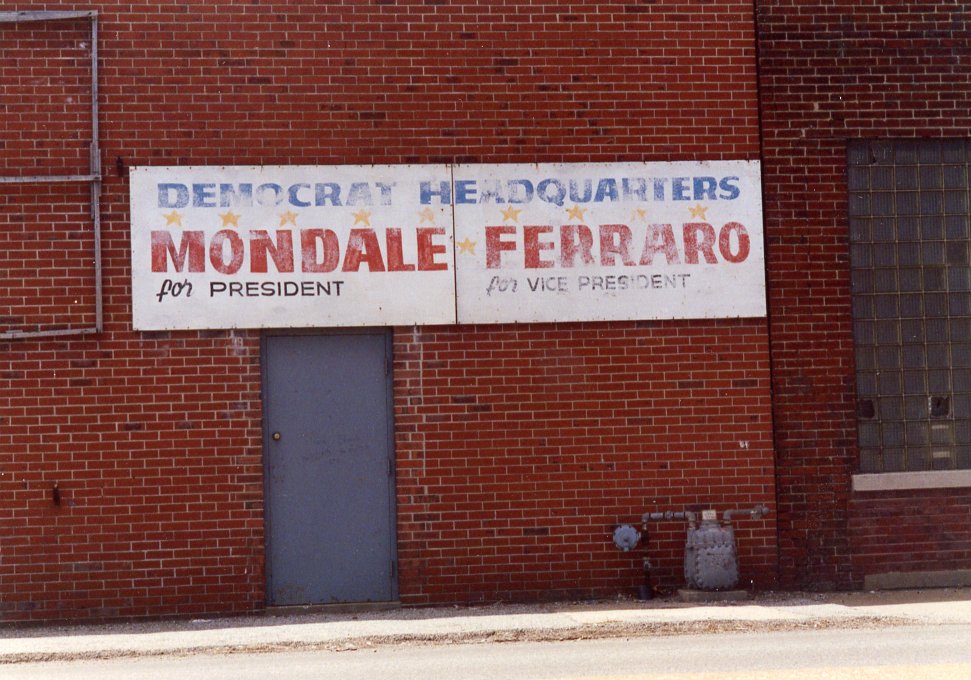 Those who break through ceilings understand the pain often involved in upsetting the status quo.  It takes lots of patience and persistence, and an endless succession of heroines, sometimes male, mostly anonymous, who plow the ground toward future success.

It is a truism that those who have power rarely willingly concede it.  They are accustomed to having control, and will do whatever is necessary to keep it.

It takes courage to keep fighting for equity.  It was a conscious calculation for Walter Mondale to pick Geraldine Ferraro to be his running mate; it took courage for Ferraro to get to the point where she got the nod to run for Vice-President.   So it goes….

We know the history of democracy in this country.  I won’t belabor the points.  Running things was for a great part of our history the province of white men of means.  Then it was white men, whether of means or not.  This was and still is reflected in Law, again, largely made by white men.  (My DNA says I’m virtually 100% white European, French and German and English).  I’m no “man of means”, but I’ve been spared many struggles because of gender and race.

The emancipation proclamation freed the slaves in 1863, but only, effectively, for black men, and that only temporarily.

Women had to wait until 1920 to get the right to vote, and we know how that has gone.

As we move on through the current days, the group I am watching, and cheering on, even when I disagree with a specific or that, is the group I would call “young women of color”.  For all of American history their gender and race has been largely kept in the background, with little power.  Every day I see new indications that they are rising up.

Now is their time.

Yes, there will be disagreement, and there will be mistakes – real and perceived – but make no mistake, this is their time.  Not all will be positive examples for their gender or generation – we’re seeing that already.  But this is a time in history which I personally look forward to.

POSTNOTE, April 25, 9 a.m.: On my walk this morning I reflected what I wrote yesterday, and back home were two comments from long time friends.

I’ve been on the ballfields of life and (to Marion) I have also ‘shared many struggles’, but ‘spared’ because of gender and race.

To Greg, the ball-field has not been equal, ever, in our country, and we all need to come to grips with that reality.  Whatever our circumstances, our white maleness, regardless of family standing, gave us an automatic head start.  As we speak, there are hundreds, literally, of legislative amendments in most of the states of the U.S. attempting to make it more difficult for certain others to simply exercise their right to vote.  These initiatives of course are always couched in protecting the sanctity of the ballot, with no accompanying evidence of any abuse worth writing about.  The Republican side, I think, wants our divided country to play the ball game on a field which for them is 45 yards from the end zone and for the others 55 yards….  It’s only five yards difference from 50-50, but oh, the difference that five yards make.

Out on the walk I was thinking about the topic of women in political leadership, which is the point of this post.  This is not a good and bad distinction.  I made an informal list of women leaders In recent history which includes a thankfully former Congresswoman of mine, female, who was (my opinion) a disgrace; and another former candidate for vice-president whose only qualification was – well, I don’t really know….  There are a great number of women who learned to play the game by the mens rules, and this didn’t make them a better person.  Women are no more all alike, than are men.  But took them over half our lifetime as a nation to even achieve the potential right to vote.  White men, and even slave men, didn’t have that delay.

No question, this is a difficult issue.  But we’re at the transition point, and I’m one man who wishes success to the women who have a positive vision for the future of democracy.

POSTNOTE April 26: I continue to recommend the series on Racism that I participated in a year ago, which began right before the Pandemic.  It was a significant learning experience for me.  I think you can still access it here, scroll down to Becoming Human.  Posts relating to George Floyd as amended are at Mar 29 and Apr 19.  The first segment on CBS 60 Minutes on April 25 was on the George Floyd case.

from SAK: Many thanks for the piece on “Women”.

I was intrigued by Mr Halbert’s response which went thus:

“Enough focusing on past injustices. No one alive today caused past injustices. Yet, most people alive today have been treated unfairly at some time. When we get knocked down the only option is to get up and try harder. We can shape our lives much more than other people, “society” can shape our lives, We, each of us, is responsible to shape our future through hard work that includes getting a good education.”.

May I point to today’s Germany where, again, most (by far) people alive there today did not cause past injustices. Yet Germany has successfully healed its wounds and is now a shining example of how to repent & redeem the past. T.S. Eliot in his Four Quartets wrote: “And time future contained in time past”. It is not an option to shirk responsibility & try & muddle along as if all past injustice is just that: past. There is space for forgiveness but also for acknowledgement,  atonement and most importantly work to improve things.

There are a few effects & ideologies working against this necessary work. The first is perceiving the past through rose tinted glasses and indeed glorifying the past. Another is the belief that rugged individualism will succeed no matter the circumstances. This is linked to US’ specific history and the abundant Hollywood productions supporting this myth. It also connects nicely with the American Dream idea. I would suggest reading this article by the evolutionary biologist David Sloan Wilson, I Have Come to Bury Ayn Rand (with a wink at Shakespeare’s Julius Casesar).

The fact that is much closer to the truth is that, as Brecht put it in a poem, “we all need all the help that we can get”. This becomes especially evident when crisis hits, & there have been many crises in our own lifetimes.

I’ll also add the point already alluded to by your good self that there are entrenched interests who favour leaving things as unjust as they are because it suits them, their financial prospects and/or their positions of power. Many ultra conservatives forget that the present status quo was resisted tooth and nail by older generation of conservatives. That is the same status quo that present ultra conservatives try & preserve at any cost – a status quo which has never been that static anyway but perhaps some think it will preserve their own status!?

Of course I am all for Mr Halbert’s recommendation that all should not shy away from hard work or getting a good education. It’s just that some might need a nudge to get on the starting line and perhaps help paying for that education.

Many thanks again & warm regards,