I viewed the new film “Official Secrets” on Saturday afternoon at the Edina Theater.  It is a film that is engrossing, and its topic is the run-up to ‘shock and awe’ in Iraq which began about the first day of spring in 2003 – a day that should live in infamy for all of us.  Coleen Rowley had an excellent letter on the film in today’s Minneapolis Star Tribune (3rd letter in the queue).  I also referenced it in my 9-11-01 post last Wednesday, with link to the John Rash column.  I’d urge everyone to see the film.  Just remember the name, “Official Secrets”. 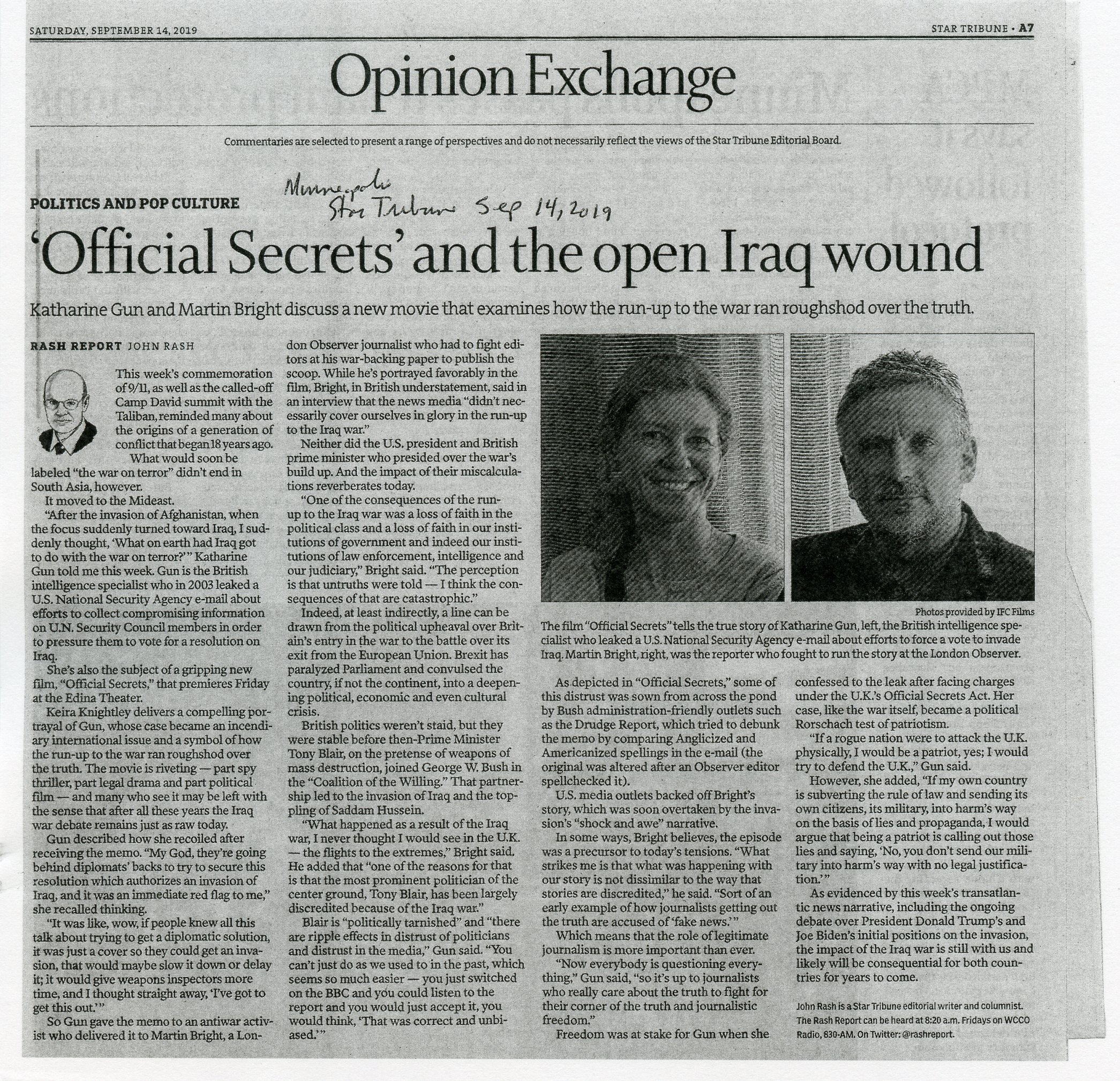 Why title this post “Drones”?  We’re in an age where headlines substitute for “information”, which often is disinformation, spoken in headlines.

Why “Drones”?  The same weekend as I saw the film, the apparent drone strike in Saudi Arabia has been front page, and who to call to account for it.  Best advice I can give is to believe nothing from official sources…or even supposedly informed opinion.  The film deals a bit with this rabbit hole.  Caveat emptor.

Most of us have a long history with drones, even if we didn’t call them by that name: my first memory is of a guy on my walking route to the overlook of the Hull-Rust-Mahoning iron mine in Hibbing, back in the 1980s.  I’d often see him there, flying his radio-controlled model airplane.  Some years later, similarly, when I’d be driving in from Apple Valley to Mall of America area, I’d see another guy playing with his model aircraft over a pond beside 77.  His small aircraft had pontoons – a bit more risky for a hobbyist.  The history of drones goes back much further.

Of course, now drones are military grade, and very effective.  And our national delusion was that we are the only ones who can develop and use the technology.

I took the risk of weighing in on the issue of drones some years ago.  The evidence stays on line, here.   Actually, as you’ll note, I’ve written about this issue several times.  The one I’d point to first is #488.  There are plenty of comments, and a followup “chapter two”.

I think my main rationale back then was that, at least, drones were better than ‘shock and awe’ tactics such as we used with catastrophic results in Iraq and other places; better than ‘nuking’ somebody as well.  The issue is very, very simple,  and extraordinarily complex, especially in an age of disinformation and deception at the highest levels.  .

Of course, I don’t know who authorized or pulled off the recent drone strike.  I’m not going to attribute guilt in any particular direction.  But history did not begin with the drone strike on Saudi Arabia.

For sure, engage in 10 Days Free from Violence, beginning Friday.

And put on your calendar October 23, a special event at the beginning of the 75th year of the United Nations.  Here is the program: Flier Oct 23rd event JJ Hill House-v4.

from a long-time friend who prefers to speak anonymously: “Interesting article on 9-11. And in reference to your Drones discussion, I think that we are seeing the consequences of the Balfour Project.  I think I shared documentation relating to that with you [see below].  If not, let me know and I will forward it to you.  I believe that pressure from the Religious Right in keeping with the objectives of the Balfour Project is what prompted Trump to pull out of the Iran Nuclear Agreement.”  [here is the article referenced, which I received in March of this year: Lord Balfour Project Lecture.  The lecture is academic and lengthy, but very interesting.  My friend also wrote a summary essay about his knowledge of ISIS.  The two pages are here: The Origins of ISIS_Abreviated]