Posted Friday, Sep. 20: The first five days of this week were a quite unexpected and remarkable five days, and the common bond was music, and directly connected to people in community.

Sunday through Wednesday were the first four nights of Ken Burns remarkable series on Country Music on public television; the series continues on Sunday evening.  Thursday was the first concert of our Minnesota Orchestra season, a program conducted by Osmo Vanska which began with the traditional Star-Spangled banner (which I first remember performed at Orchestra Hall a couple of weeks after 9-11-01 with conductor Eije Oue.

I love music.  It is almost genetic, though I flunked piano and never played an instrument, or otherwise hung around concerts and such until I was well along in my adult life.  I grew up in the fairly early radio days, and I recall that someone – Mom or Dad or both – liked the opera enough so that the Saturday concerts from the Metropolitan Opera in New York which reached us in rural North Dakota.

Watching the Burns series, I became aware that I had a familiarity with old days country music, which could only have come via radio.  The old names and their music was familiar to me, though the music, records and broadcasts came from far away.

Back in 1977, my then 13 year old son and I were driving to Florida and I stopped in Nashville, mostly so I could show him where the Grand Old Opry had been performed.  We saw the inside of the Ryman auditorium.  By 1977  there was a new venue for the program elsewhere in Nashville.

The Minnesota Orchestra was a fitting continuation of a musical week.  It was a two-standing ovations program (see link with pertinent pages which follows).  The Finnish pianist, Juho Pohjonen, was outstanding; and the Elgar Enigma Variations got us on our feet.

But what was most notable to me were two commentaries in the program book: a tribute to  maintenance worker who was retiring after over 40 years at Orchestra Hall; and an Essay by a long-time Usher (see here: Orchestra Prog 2019001).  It was a neat touch, but not unexpected from this Orchestra who went through tortured times some years ago, when an effort was made to break the musicians union, and the resulting settlement has led to what I see as a much stronger community organization.  A community which had been literally torn apart back in 2012 by a lockout, kept the faith, and after the conflict was finally resolved, came back together.

My week was not yet over.

Friday, I dropped in on a large climate change rally in St. Paul, which along with other such rallies world-wide has highlighted another community – particularly the young people of the world who will be the victims if climate change is not aggressively addressed.  The issue to me is the human dimension to climate change…the things we humans can and have impacted.

The community I mingled with for a time Friday was primarily young, and led by youth.  My understanding is that this global initiative was spear-headed by a young Swedish girl.  Today, our community is global, and energy can be consolidated quickly if there is the will, much more quickly and effectively than a century ago.

Today I met a young mother with her son, coming to the gathering area.  The lad was carrying a piece of paper.  His Mom said he wanted to make his own sign.  Later I saw them.  He was, in fact, holding his sign (which I don’t think was much more than pencil scribbles on his piece of paper).  No matter at all: he was on the court!

I saw a sign in Swedish, which apparently was in solidarity with the young Swedish woman who spearheaded this worldwide demonstration. 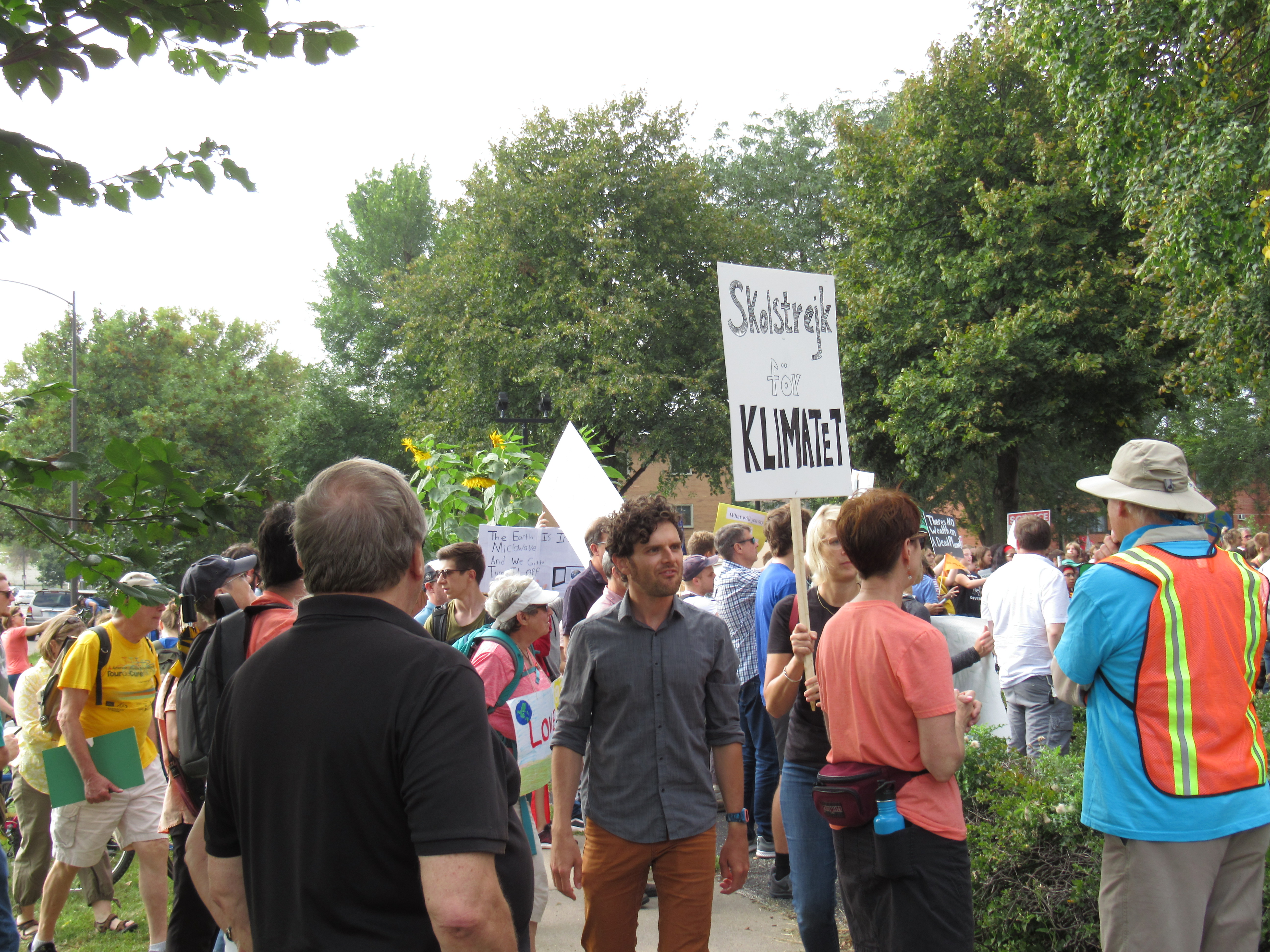 As I left the gathering area to the State Capitol for the rally itself, I saw another young girl making her own sign about saving the glaciers. 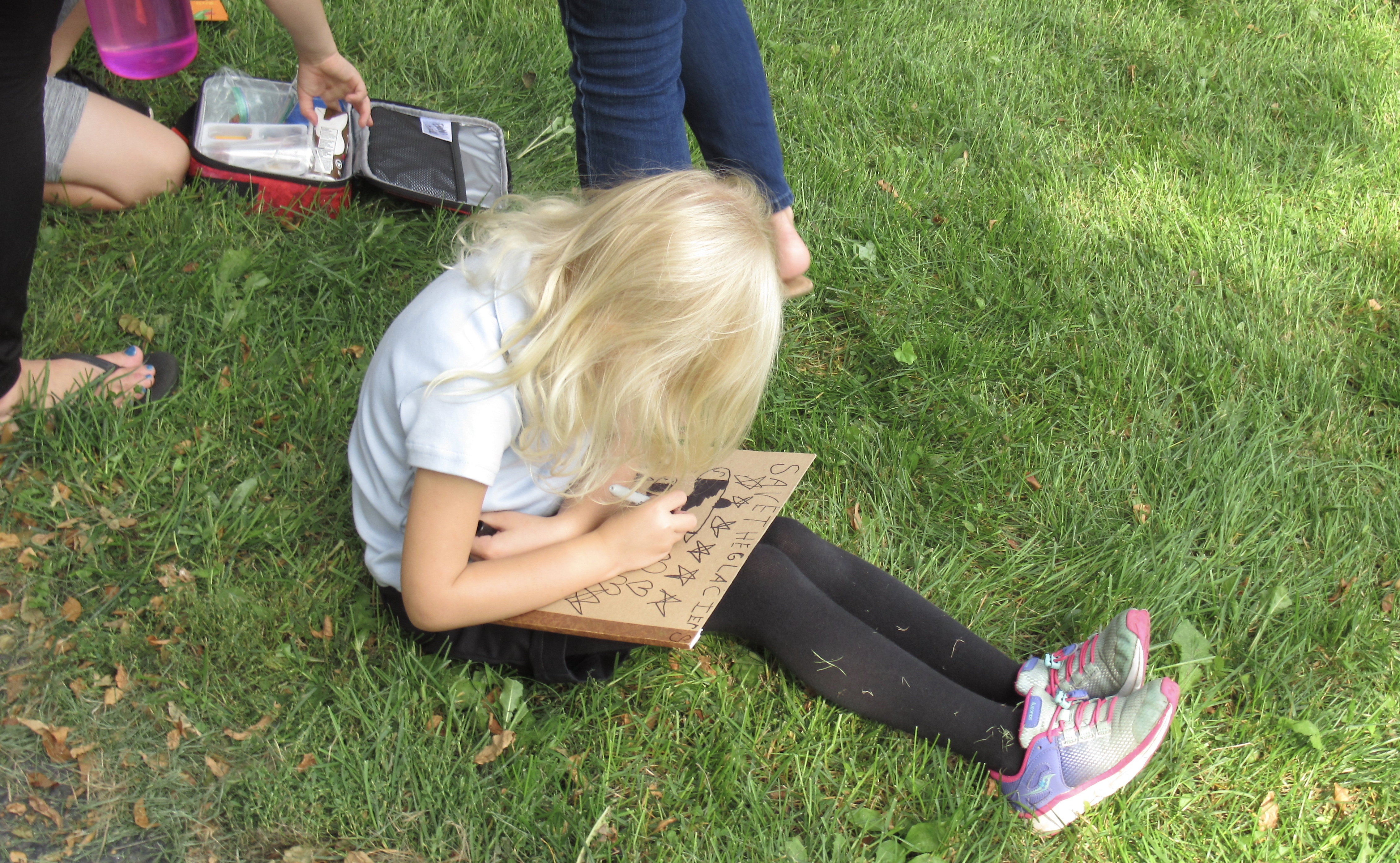 This struggle is for our future, and our future is the children.  All I can do is support their efforts in any way that I can.  They deserve better from us.