POSTNOTE JUNE 8:  Latest update on televised hearings: “The hearings will be broadcast on C-SPAN, ABC, CBS, CNN, MSNBC, NBC, PBS, and the Fox Business Channel and streamed on the YouTube channel of the House Select Committee on June 9, 13, 15, 16, 21, and 23.”  Heather Cox Richardson, Letters from an American, June 8, 2022

I write this on Wednesday, June 8, and will publish this afternoon.  The public hearing of the House Select Committee to Investigate the Jan. 6th attack on the U.S. Capitol begins during prime time on Thursday, June 9.  CBS, NBC, ABC, PBS, CNN and MSNBC will carry the public hearing live.

The first three predictions relating to “Supremes and January 6 Committee” were filed on June 4 and 5.  Check back to the originating post to read them.

Personal opinion: These are deadly serious matters, all of them, in a country that is literally in Civil War.   We know how that last Civil War turned out…why do we repeat futility?

Sometimes I wonder if we’re in a war within our own country, that is slowly killing us all, in many ways.  Are we committing national suicide?

A great deal is happening in coming days, starting with the prime time report to all of us on the continuing findings of the Congressional Committee on January 6, continuing with other crucial situations which require our attention and action as citizens.

Everything ‘public’  – our lives – revolves around Law in one way or another.  Most in Congress and Senate are well versed in law and great numbers are lawyers themselves.  This is far more than the refrain from someone angry: “sue ’em”.  The practice of Law to ascertain truth is careful, methodical and slow.

Then there’s the matter of media, and the source of information people rely on to make decisions.  Too often, truth has been a casualty, sacrificed on the altar of ‘free speech’.  How can we survive in an environment of so-called “alternative reality”? We really can’t.

Jan 6 Congressional Committee:  there are two legs to this.  The main function of the Congressional committee, in my opinion, will be to establish a permanent and public record of  sworn testimony and evidence of who, what and when.   The proceedings will live permanently beyond the life of the Committee.

The Department of Justice deliberations are of necessity slow and methodical.  There will be no public report, other than whatever indictments might be issued down the road.

The Supreme Court ruling on Roe v Wade and related.  I didn’t read the leaked Draft .  What I’ve heard, it sounds like a typical draft being shared around for review and comment by those who ultimately will sign it.  I have no idea what the final decision will be.

The so-called ‘life’ constituency is in the 50th year of Roe v. Wade and they want it gone, and they think they’ll succeed.  In the long run, their campaign has already failed.  Not everybody, not even a majority, supports getting rid of the protections for women’s rights given through Roe v Wade.  They will never rid the world of abortion, in fact they might increase it, albeit more dangerously.  Whatever the ultimate words, the ruling will be analyzed endlessly.  It is expected probably the end of June.

Uvalde and Guns:  I have no idea what will float to the surface in the next days and months.  Personally, I have never owned a gun; there is no human right to wander in public with a military weapon designed specifically to kill people.  Why, in our country alone, is this insanity allowed to continue under the pretext of “freedom”.

Ukraine:  I wish there were a way to peace there, but when Putin has his feet in cement, and communication is heavily controlled in the largest country on earth, I think this will be a long slog.  Putin has already lost; but he’ll never admit it.  Ukraine deserves our strong support.  It is a free country, for almost 40 years.  It will never be controlled.

There are more issues, of course.  so-called “States Rights” has resurrected itself to no one’s ultimate advantage.  There is a huge difference between “United States of America” and simply “States”. But enough for now.

Sunday night we watched the first installment on CNN about the constitutional crisis at the time of the Richard Nixon presidency which ended with his resignation in August of 1974.  The second installment will be Sunday night, and if past is prelude they will rerun part one.  Both are worth your time.  At the end of episode one, Richard Nixon seemed politically dead, what with Watergate.   You know the rest of that history.

Sunday, in my religious tradition, was Pentecost, according to our Pastor the third of the most important feasts, the others, Christmas and Easter.   The church newsletter had a commentary on “Unity in Rich Diversity” by a staff member I highly respect, and it is worth your time, here: Johan VP June 5 2022.

But, here’s a photo of a car I found myself behind at a stop light last Friday morning.  It speaks for itself. 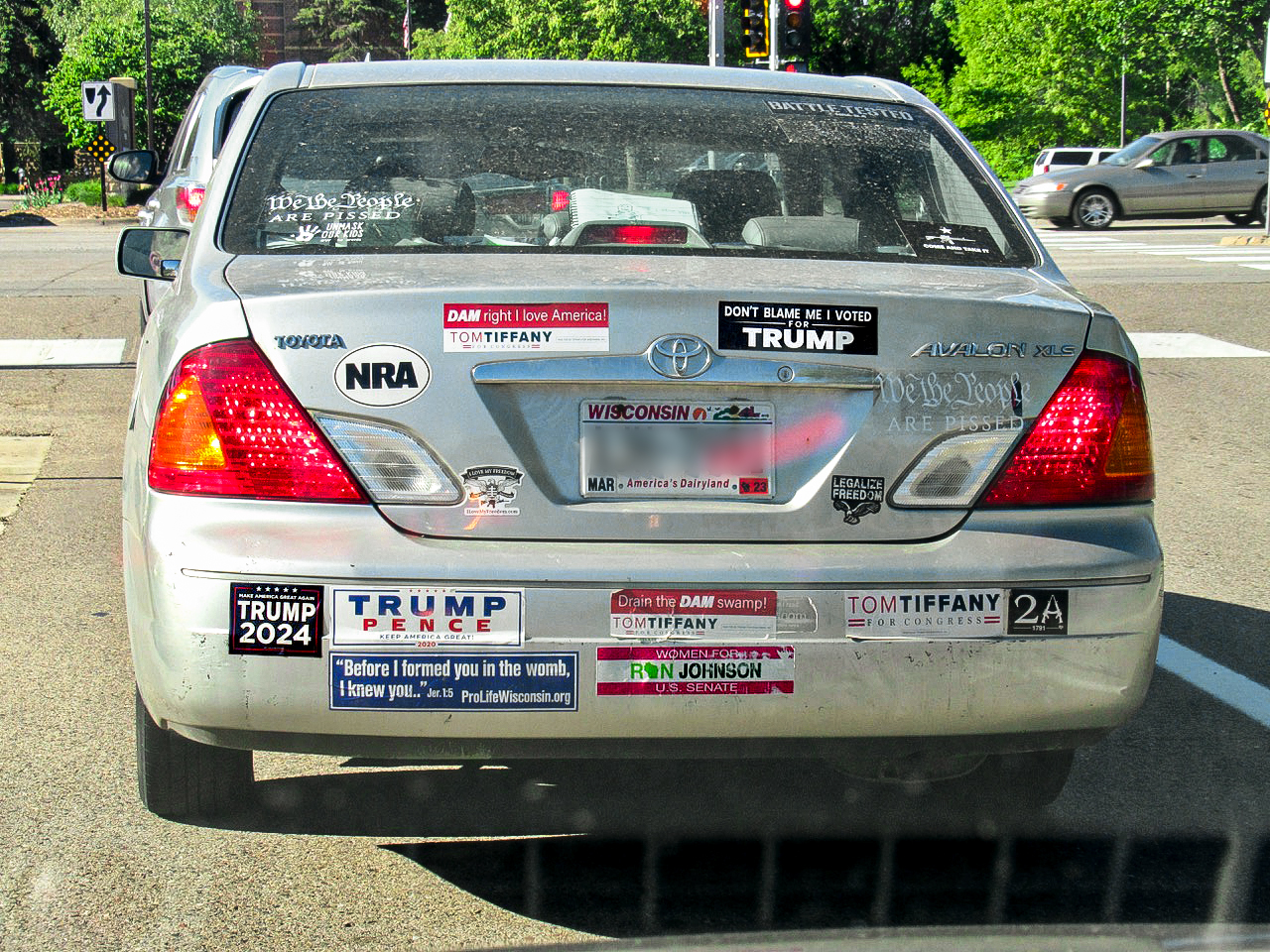 Work for change in the coming months.  It does take work.  There is about 5 months to election 2022.

From Joyce: We’ve been in a cold Civil War for a long time, at the very least since Ken Starr started doing research for his pornographic tome. The right has wanted to undo the New Deal since its inception, but it was Gingrich who showed them how to do it.

from Tom: To anyone following the story. Please read this piece before the made for TV star chamber on Thursday. There is another human side to the story. The people that the government is trying to demonize are not necessary as portrayed, and neither are the supposed heros.

Note from Dick: Tom includes a 31 page blog [I printed it out] which appears to presume that five people who were engaged in the protest died at the hands of others, including one of the policemen, and one woman who was attempting to forcibly entered an off-limits area and was shot and later died.  I have no idea about the credibility if any of the blogger, since there is no description of him available.

from Annelee: Over 700 Gun victims have died since the elementary school shooting at Uvalde.  The cry for change is overwhelming. I am 95, and when I look at the past, it seems we, the American people have forgotten what we can achieve if we are serious and united  work at it until we succeed.

Remember the power of the cigarette companies? They hid their own health research and showed western movie heroes smoking their brands.  In the 1960 51% of men and 33% of women smoked.  It took time and effort.  Today 15.5% of men and 13% of women smoke.

Drunken driving today is a crime. It was reduced by the work of MADD, and protest lists sent to our representatives.  It is the power of the people that brings changes.

It is time that we hold our elected Representatives and Senators responsible for their actions and the laws they sponsored. The NRA is a most powerful organization.  Every lawmaker who takes campaign money from the NRA is truly more indebted to them, then the safety of their constituents.

Even after a second appointment with a doctor, Michael Lewis 43, for several  days was still in pain.  Frustrated, he went out bought an AR-15 assault weapon and a pistol.  Michael Lewis went to the hospital and shot four professionals who served the patients.

I had knee surgery on April 7, 2022. I am in pain days and nights,  am I frustrated?  Yes, I truly want to heal. I am a peace-loving person. Would I shoot someone?  NO. But even if I wanted to I couldn’t because  never owned a gun.

To save lives and get the changes we need:  organize and agree on the gun changes necessary. Collect signatures in your neighborhood and present them to your representatives. I bet there isn’t a lawmaker who in his campaign stated: “I want to introduce laws so our 18-year olds and anyone who wants to own an assault rifle and other guns should have them.” Oh no, they promised you they would work for you so you would have a safe and better life.

WELL MAYBE YOU SHOULD CHECK OUT YOUR RERESENTATVE AND SENATOR AND SEE WHAT HE/SHE HAS DONE FOR YOU??? Sometimes words are cheap and soon forgotten.  Let them know you can and you surely will go out and vote in November.  Dick, if I was  well, and younger, I would be out and working.

Dick responds: Annelee is the real deal.  Born in 1926 in Germany, and living there till 1947, she know of what she speaks from first hand experience.  It is a privilege to know her.