PRENOTE: I did watch the entire Jan. 6 Committee report on June 9, and plan to watch the remainder beginning Monday 6/13 10 a.m EDT (9 Central) on the Committees YouTube Channel, with a followup column likely the same day.  Your comments are solicited.  The Committee Home Page is here. Remaining hearings Jan 15, 16, 21 and 23 schedule see linked home page for detail, though they will all likely be at same time as the 13th.

See additional note at the end of this post. 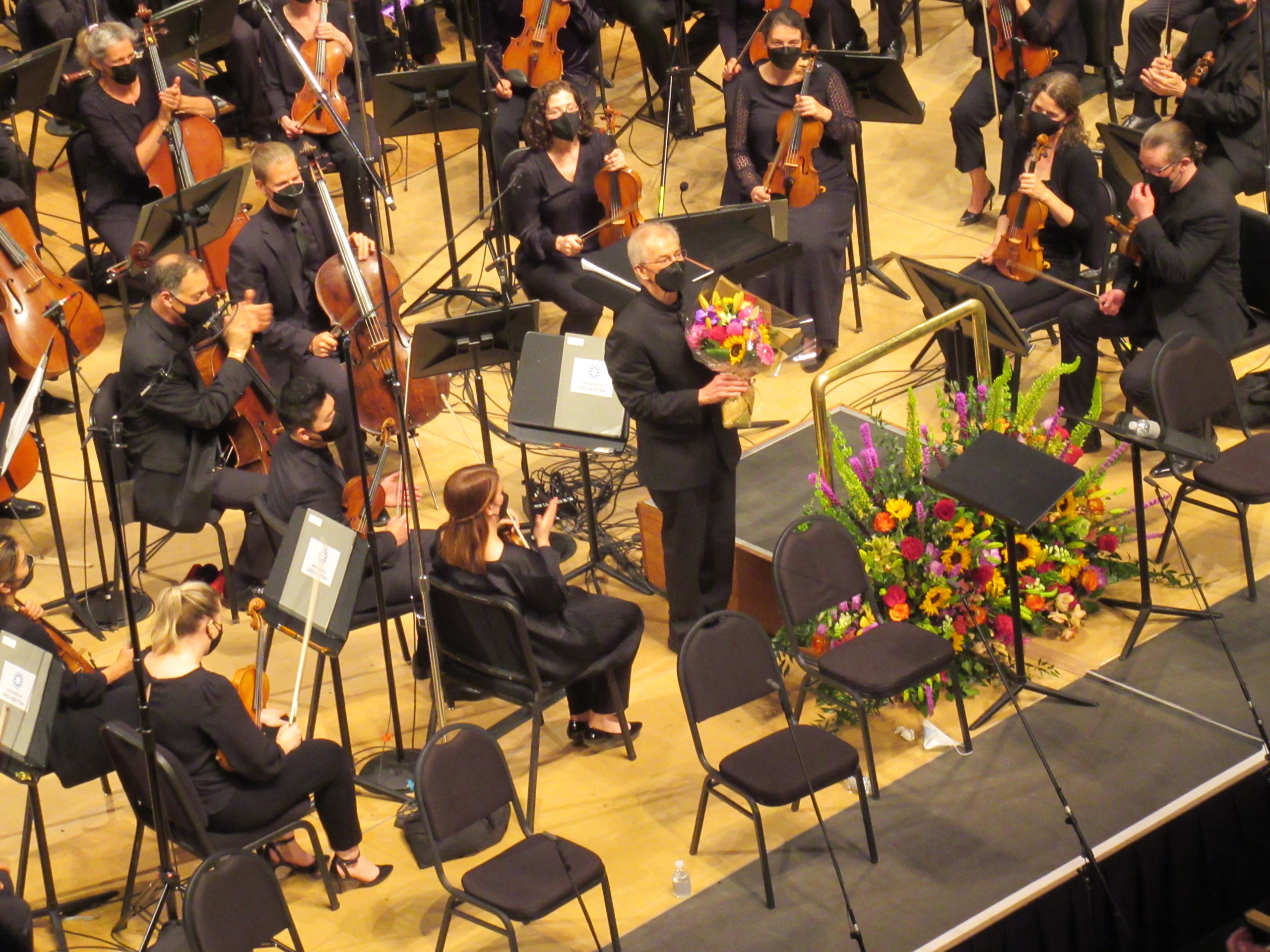 Osmo Vanska, the Man of the Hour with the flowers, Orchestra Hall, Minneapolis Jun 10, 2022

Osmo  Vanska: Friday night we were part of a packed house at Orchestra Hall in Minneapolis for the final concert in the Minnesota career of Osmo Vonska, leaving for his next gig in Seoul, Korea.  His career here began in 2003, and ended triumphantly with a 80 minute performance of Mahler’s 8th Symphony, dubbed The Symphony of a Thousand.

The evening was filmed, and we were told that it will aired on-line probably in a few weeks, so anyone will be able to watch it anywhere.  I’ll let you know if/when I know more.  Doubtless the information will be on the Minnesota Orchestra website.

Here’s how the Maestro and the Symphony were described in the evening playbill: Vonska:Mahler June 20, 2022. 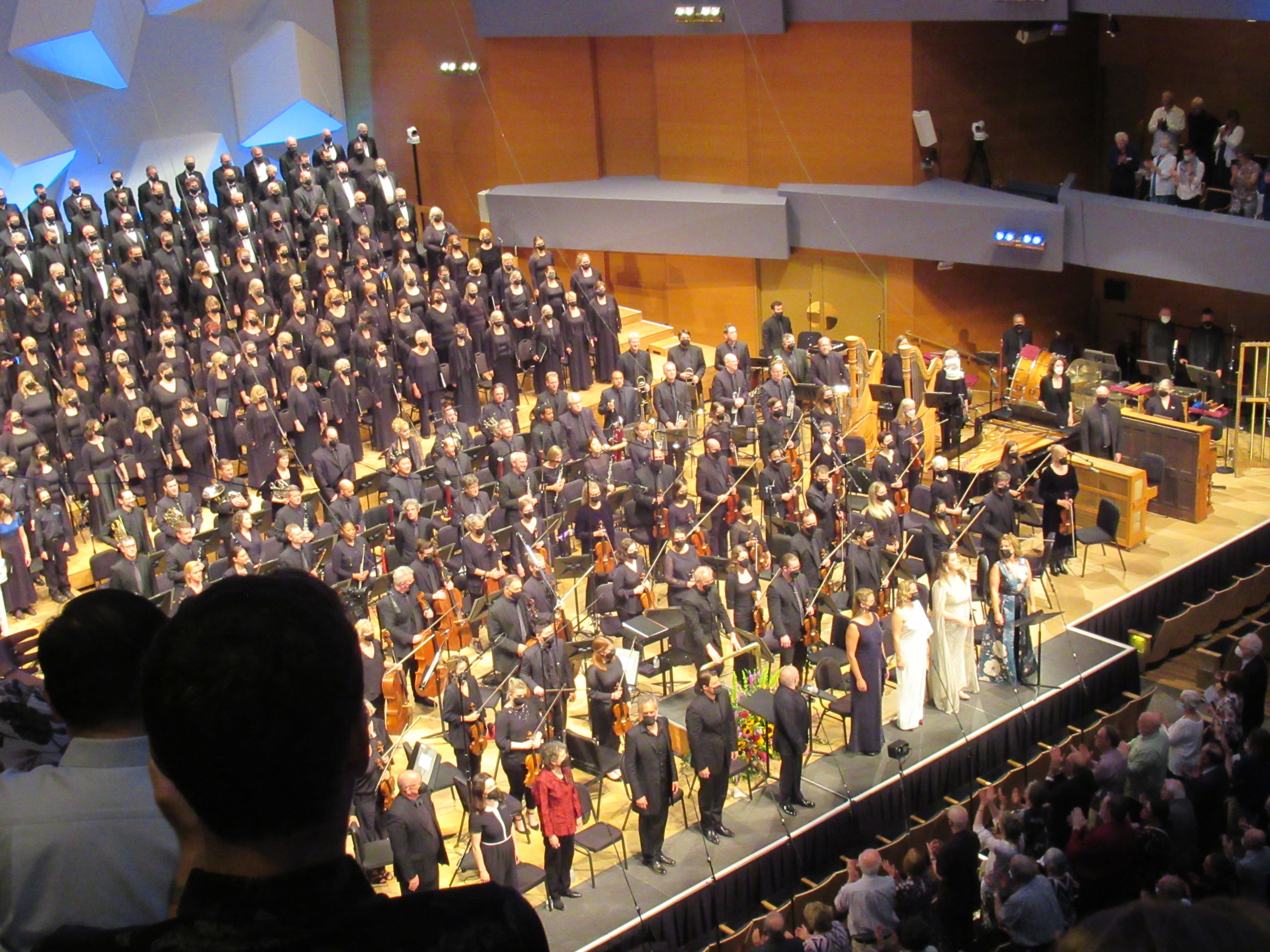 Personally, we’ve been part of the Orchestra family for many years, preceding Osmo Vonska’s first appearance with the Orchestra in 2000.  We do the short season of six concerts with perhaps two or three others each year, so we’ve seen our share of the programming by this remarkable world-class orchestra.

Probably the most memorable period for this old Union guy was a very long period when a labor dispute resulted in a lock-out of the Orchestra by management.  Mention of this is in Michael Anthony’s description on pages 5 and 5A of the attachment linked above the photo.  Rarely have I seen labor solidarity more evident than I witnessed with the men and women in the band, so to speak.  They were examples to all of us.  It was a hard, very long, slog of well over a year.  Ultimately, sanity prevailed, and the Musicians Union survived.

At a crucial point, Vanska, he, the most crucial part of Orchestra management, resigned his position, and in other ways supported the union.  This was by no means a routine move.  He laid his career on the line.

Ultimately, as there always need to be in such matters, there was a settlement.  People like ourselves – the audience – were also crucial participants in many ways at numerous times.

Settlement reached, all got together again, filling their respective roles professionally and immediately.  Then came Covid-19 and another chapter….  I could tell more stories.

Vanska richly deserves his accolades, and his Orchestra showed their affection for him on Friday night.

My personal thank you note:

The Masks: Most any performer will tell you that it is the audience who brings the energy to his or her performance.  No difference, a world class Orchestra, here augmented by well known professional choirs in front of a packed house.  The in-person crowd is an integral part of the performance.

Performing in an empty house for even a large virtual audience is not the same as actually having people there, who you can see and sense.

Now, look at the photo emphasizing the conductor.  The maestro and all the musicians are wearing masks.  Leading by example.

In my area, I saw only one person electing not to wear a mask – just a normal looking young man.

Yes, the dress for the evening included masks. We’re still in the early post-Pandemic phase of recovery.  Everyone was asked to wear them.  I noticed the choral group members did as well.  Of course, it’s sort of hard for the horn players to play their parts, masked, so there were exceptions, but nonetheless it was impressive.

Personally, I nearly passed on attending.  Early in the week I was visited with a bad head cold.  I was miserable.  Enough of the symptoms fit Covid-19, which nowadays manifests in different ways, and last weekend we’d been at a graduation party where my friend, Grandpa of the graduate, with lots of pre-existing conditions and all the shots taken, told me he’d had a recent bout with the Covid and it was no fun.

So, I felt a little guilty about going to the walk-in clinic for a once over for what I felt was probably just a common cold.

The medical folks were their usual polite selves.  My vitals were fine.  The physician authorized the test, did the swabs, and home I went.  A few hours before the concert the test results came back: negative.  I decided to go; no coughing or other incidentals of the cold, which seemed to be (and is) dissipating.

Personally, I’d have enjoyed the evening more, maskless, but that doesn’t make me unique.  We remain in challenging times.

All things considered I’d like to see this all go away, but I also sense that my general and usual universe – the people I see each day – seem to have a general sense of solidarity and cooperative spirit.

Maybe there’s a little better tone all around….

POSTNOTE:  This is summer, and the next few weeks there’ll be potluck, including two possible short trips away.

I do plan two or three posts on my usual schedule of one or two a week, but I likely won’t publicize them in the usual way.  The first will probably be after Monday, June 13 public hearing of the Jan. 6 Committee.

Simply check in once in awhile, if you’re interested.

Have a good summer.

from Judy: Enjoy your time away.  Thank you for the reminder about the ORCHESTRA…Peace to you.

from Christina: Enjoyed this, Dick!  Thanks much.

from Judy: I went [Saturday] nite and it was equally as thrilling.  My experience was similiar  to yours, most masking up around me as well as those on stage.  He has done so much for the community.

from Steve: Loved your personal notes and review, Dick. You’re right about the quality of this orchestra and their character during the union negotiations. Looking forward to what’s next for this group.

from Harry: Right on, Dick!