A few hours after publishing this post, I went on my daily walk, and found this in chalk along the curb. It had been placed there since yesterday (I always walk the same route)*.
UPDATE on the photo, June 29: I went by the spot about noon, and no evidence of the chalked saying – it rained overnight. So the photo is the only reminder that it was ever there. One of the truths of accomplishing big things is the adage: “if you can believe it, you can achieve it”. This applies to many things in many ways.
(click to enlarge) 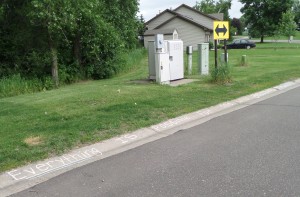 At the exact same time as the disastrous sectarian (religious) war in Syria and Iraq, another religious inspired event, an essentially covert religious “war” of its own, is being marketed in the United States. It began on June 21, Summer Solstice, and runs through July 4: a fortnight involving an annual natural phenomena, a national holiday and a religious initiative. It is quite a marketing package.
Today is the half-way point of the official observance; but it will continue long past July 4th, rest assured.
It is called “Fortnight for Freedom” and its marketing focus is on an alleged heavy-handed federal government coming down on poor beleaguered Christians who are, it is suggested, forced to compromise certain religious beliefs to obey laws with which they disagree, such as parts of the Affordable Care Act (aka Obamacare).
Just one example: being required as a company or employee to dispense birth control to others who desire that particular service when ones believes birth control is a sin. It is, indeed, a clash: a demand of freedom for one; with no apparent attention about freedom for the other whose views might differ.
The initiative seems to make so much sense, if you go no further than the surface rationale. As you think more deeply about the implications, though, it is really a tangled web of deception. “Freedom” apparently only applies to those who can then restrict certain others freedoms. Thus Fortnight for Freedom isn’t about freedom at all, it is about domination and control, imposition of beliefs, only without the bombs and bullets. It is about marketing an idea, a belief, as superior to other contrary beliefs.
Here is a description of Fortnight for Freedom. “Fortnight for Freedom” and its companions have come at me from a number of different directions in the last week or so.
Last Friday, the local Catholic Archdiocese newspaper, the Catholic Spirit, had a photo of four earnest looking Bishops on page 11, all intently looking at an iPad above a headline “Bishops focus on religious liberty….” I am Catholic. I get this paper. I know their story…. 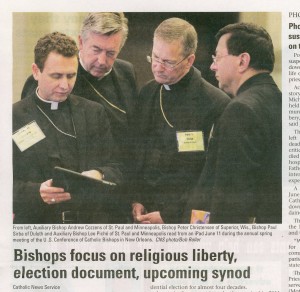