Late yesterday afternoon was beautiful weather for driving, east bound from North Dakota to the Twin Cities.
A brilliant sun was at our back, and all around us were those wonderful puffy cumulus clouds, and farther ahead magnificent “mountain ranges” of white clouds atop rainy weather somewhere to the east. The vista began about Freeport MN, “Lake Wobegon” country, and lasted till we bore south at St. Cloud. I tried to catch the moments in photos, but you know how that is: the best pictures are in the minds-eye, and the scenery, when it comes to clouds, changes by the second. But I did stop once, and below is what I caught in a snapshot – no prize winner, but at least evidence.
(click to enlarge all photos) 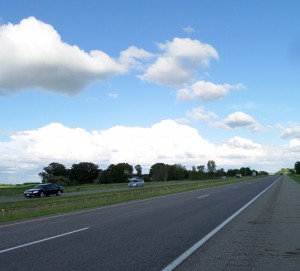 As I drove, it reminded me of long ago days as a kid in North Dakota, on occasion lying on the grass looking at clouds floating by. Maybe you could imagine something a cloud represented; you got at least a sense of speed and direction and even elevation of the clouds. Of course, this was all abstract to a kid, but nice clouds in combination with a nice day were times and memories to be cherished, if only for a few minutes (till some bug, or another thought or interest, interfered!)
Perhaps the sense of those clouds was heightened by the two days prior when four of us were engaged with doing the necessary things which come with drastic change of life for a relative in a nursing home. Things like attending to beginning to prepare the farm home for hoped for new inhabitants; making arrangements for scrap metal to be hauled, etc.
It wasn’t a neutral activity for me, having spent a lot of time at this farm place over the years, and now the guy in charge of the most major change in the history of this 110 year old farm, owned and occupied continuously by the same family, and now being prepared for new residents, a new life.
This sense of change, more than the work at the farm, contributed to a personal sense of feeling emotionally and physically exhausted this particular day. We had planned to stay one more day at the farm; it would not have been productive for me.
The puffy clouds within my eyesight, coming home, were an occasion of reverie for me, remembering.
I had taken one last photo when I left the farmyard four hours earlier. It is below. At right is the original grain bin built in 1905; in background is the house we had been working on for the last day. 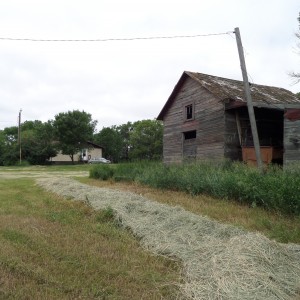 Before leaving the property, I noted two voluntary clumps of peonies, festive in bloom beside the house. They were as if in memory of Aunt Edithe, who planted and nurtured them in past years, and who died just months ago. Through them, she lives on. 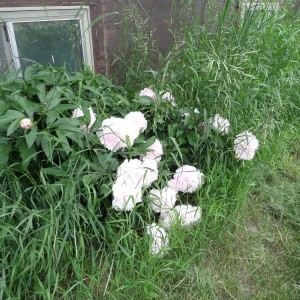 At the corner of Highway 13 and the farm road to the ancestral farm I stopped to take my annual photos of the Wild Roses that abound there each summer. The road grader crew needs to know of their existence, and allows them to live on, a vibrant colony.
The wild rose remains the state flower of North Dakota, and here is the one I found most attractive this day. 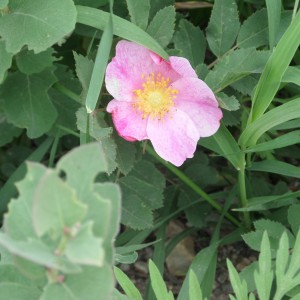 The clouds and the flowers: a good reminder to us all. Take time to enjoy the simple things of life. After awhile, it’s all that’s left.
POSTNOTE:
As noted, the sole survivor of the rural North Dakota home now lives in a nursing home. He has always been, and remains, very spiritual.
Recently I came across three family photos that are pertinent to his and the family story. They are below.
The first is of the old Catholic Church and Public High School in the County Seat in which he lives. The current Catholic Church, in the same location as the old, is directly across the street from the old High School, which was replaced by, and for 42 years has been, the Nursing Home, and is now my Uncle’s residence. Most recently Uncle was pushed across the street by myself on Tuesday morning. 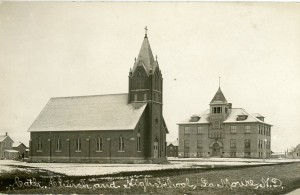 From 1915-68 the family Church was about 10 miles west, in tiny Berlin ND. Here is a recently discovered photographs of life in that Church. 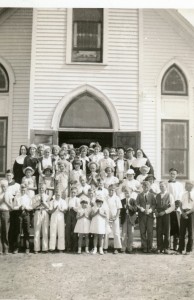 Apparently a summer religious education time at St. Johns’ during the time when there were lots of kids in the rural area. The photo is undated.