My friend, Bruce, and I were in one of our occasional jousting modes earlier today. I had sent along a post including a commentary by a self-described member of the .01%ers – the super wealthy. Basically, Mr. Hanauer, reminded his fellow super-wealthy folks that starving the middle class was not productive for the wealthy. The middle class was, after all, the market for the goods that drive prosperity.
There were a couple of parries and thrusts back and forth (see end of this post for the entire thread) and in his last comment Bruce said this about our future when we run out of the resources we have squandered: “I think community will be more important than it is today. Neighborhood resources will be important to sustain lifestyle.”

It happened that just 20 minutes before the above comment I had received an e-mail with the following subject line, and brief contents: “Project Update #6: Aurora/St. Anthony Peace Garden Shed + Tool Lending Library by Garden Volunteer, Kristine Miller. Project Update #6: We Made It!!!!!!!!!!!!!!!!!!!!!!! Thank you beautiful people!!!! More information soon! With love from your friends at the Aurora/St. Anthony Peace Garden”.
Kristine, who I had met just days ago, and community activist Melvin Giles, who I’ve known for years, and others, unnamed, had pulled off a major accomplishment, raising some funds for a simple tool shed in their neighborhood. The story is in a less than three minute video accompanying the final report of the fundraising success.
(Melvin is the “star” of the video. Listen for his “strawberry” story.) This isn’t a million dollar deal, but for the folks around 855 Aurora Avenue (just a block or two south of University Avenue, and a few blocks west of the Minnesota State Capitol) it surely is the very essence of “community” as described by Bruce. It is, also, a “kickstart” to encourage folks to make small and large differences in their circles.
The video shows the shed being replaced; I was privileged to see the new shed, still under construction, a few weeks ago. The photo is below. The shed was built as a project by students from the University of Minnesota School of Landscape Architecture.
(click to enlarge) 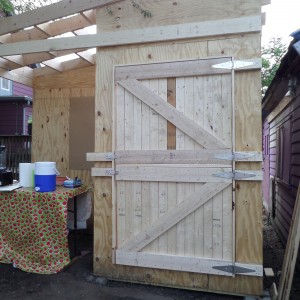 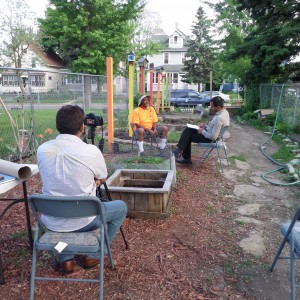 Ehtasham Anwar interviews Melvin Giles in the garden June 11, 2014. Filmed by Suhail Ahmed. Ehtasham and Suhail, both from Pakistan, were at the end of their year in the U.S. as Humphrey/Fulbright Fellows at the Human Rights Center of the University of Minnesota Law School. Interviewing Melvin was part of Ehtasham’s year-end archival project about peace-making in the Twin Cities.

It is the small stories such as this one which will save our planet.
As Margaret Mead so notably said many years ago: “Never doubt that a small group of thoughtful, committed citizens can change the world, indeed it is the only thing that ever has.“
FOR ANYONE INTERESTED, here’s Bruce and my on-line conversation “thread” which helped lead to this post. I think such ad hoc discussions (arguments) on-line can be useful to both parties, if they begin and end with respect, as I think Bruce and I have for each other, over a number of years now.
Dick, June 30, 5:29 a.m. to my usual list: If nothing else, read up on Nick Hanauer, at about the middle, about the Middle Class: [link here]
Here’s a brief bio about Hanauer.
In the end analysis, its people like ourselves, not the politicians, who’ll have to change the direction. The nature of politics is to read the wind of public opinion and get and stay elected. It’s a nasty reality in our electoral system. You are useless if you can’t stay elected, and being a representative requires you to follow more than lead.
Nobody, especially idealists, likes to hear that.
So…what do you plan to do about it, these remaining few months before the 2014 election? It’s about four months away.
Bruce, 9:27 a.m.: “…thriving middle class is the source of American prosperity, not a consequence of it.”
What has American prosperity done to the environment? That question looms large in the presents of human influenced climate change & global warming. Our economy is predicated on infinite expansion, while our planets resources are finite. Because of dwindling quality of natural resources( the high quality stuff that built the middle class is gone), the economic expansion that the rebuilding of the middle class depends on becomes far more expensive than what it took to create the golden years of the middle class from 1946 to 1980. And, the degradation to the environment becomes more severe.
I think this model that the Sunset guy [the blog referred to above] is trying to get back to is a broken romantic dream like the return to the Garden of Eden.
Dick, 9:38 a.m.: So, I challenge you, what is the alternative…a viable solution in our country, when even folks on welfare decline to accept certain kinds of used furniture because they’re not good enough….
I’m a bit more sensitive than usual about this as I’m beginning the process of closing out the history of a 110 year farm, as my 89 year Uncle, the last survivor, never married, is in the nursing home in the nearby town.
In some of the old farm photos, recently, I found two iconic images of the good old days (before prosperity). One is of a two bottom, four horse, cultivator, tended by the hired man, who probably slept in a grain bin during his summers there. The other is “Edithe’s favorite milk cow” (my aunt Edithe died in February). This from the day when she and Grandma, basically, milked the cows by hand, and had a hand run cream separator.
This was the “pitchfork” era, as you know. We’re heading back to it [“pitchforks”, literally] quickly, but the solution is not to go the utopian route. Its a bit like being addicted to something: initially, the cure is worse than the disease, and most people can’t take the transition (poverty) between wealth and reason….
Bruce, 11:31 a.m.: I’m not sure what alternatives we have. But, what I am sure of is that we aren’t given the truth of what the consumerism & materialism has done to our home. The high quality natural resources that were taken out of the earth to build the society was used to manufacture, buy, and sell things for profit. These precious natural resources that are real wealth are expressed in the stuff called junk thrown in landfills & dissolved into the atmosphere, land, and water.
The articles like the Sunset guy wrote perpetuates the destructive dream of a new middle class where labor is equal to capital so that the ever expanding economy can march timelessly on into the sunset. It can’t.
The next twenty years will be different from the past twenty years. Cheap oil is gone & the alternative fossil fuels are very expensive and don’t provide the net energy gain that the quality stuff did. The alternatives to fossil fuels will not support or sustain the consumer life style that built the middle class as we remember it. We will have to drastically change life style and the ultra-rich are the ones who will suffer the most relatively to what they are accustomed to. That is why some like Hanauer advocate for higher taxes on the rich, better wages for labor, and stronger safety net for the needy. It’s to grow the middle class. They are liberal market place capitalists that want to generally perpetuate the status quo.
The solution is to understand what the consumerism of the middle class did to the planet. Then we can move forward with solutions. People hate change, but they get use to it and it becomes normal. But, time is dwindling.
Dick, 1:04 p.m.: The Sunset Guy just reflects on stuff, as you know. [ED. NOTE: In my opinion Just Above Sunset is a very useful (and free) daily musing on matters national and international]
What would happen if we were forced into the horse and milk cow stage again? My relatives knew that era. I witnessed it in action when I was young.
The grandkids generation (mine are from about 8-27 years of age) are going to be the first generation to fully bear the brunt of our wastrel ways.
It is complicated, beyond that.
Bruce, 3:55 p.m., June 30, 2014:
I think community will be more important than it is today. Neighborhood resources will be important to sustain lifestyle.

What is a better indication of a vibrant middle class: a high quality education system, transport system and health care system or individual material wealth? Values will change.
The rich of the 50s through 70s thought that the planet’s natural resources were infinite and understood the way to wealth & perpetual growth was to grow the middle class affluence so they could consume material goods, which would keep the economy expanding making the wealthy wealthier. They for the most part thought like Hanauer. But today the wealthy understand the finite nature of the high quality natural resources of years gone by. Their answer to grow there wealth is to hoard and strangle the middle class because there isn’t enough to go around. Their answer is short sighted. The middle class is shrinking & will not return to the position it once maintained. But, the wealth of the wealthy will collapse too, because their money depends on the health of the primary natural resources( the planet) and the resources that manufacture & create things. From what I’ve read, the Thomas Pikkety book, CAPITAL IN THE 21st CENTURY gets at this point. The wealthy would rather invest in the investment markets than grow the economy. The potential to make higher rate of return is better. That is a big disconnect.
Politically, this argument is being made by fringe parties & candidates for office. I don’t see any one running for office of any kind from the two major parties making this argument. Jean Massey’s IRV [Instant Runoff Voting] voting system is the best way to effect the political changes we need. It will allow the marginal candidate with the best ideas a good chance to be elected.
Dick, to everyone who’s read this far: So, what is your opinion?
https://thoughtstowardsabetterworld.org/wp-content/uploads/2022/04/thoughts-300x138-1.jpg 0 0 dickbernard https://thoughtstowardsabetterworld.org/wp-content/uploads/2022/04/thoughts-300x138-1.jpg dickbernard2014-06-30 22:15:272014-06-30 22:15:27#907 – Dick Bernard: The Tool Shed
0 replies