This evening I attended a talk by Adama Dieng, UN Special Adviser on the Prevention of Genocide. As the speaker biography describes him, Mr. Dieng “is an internationally renowned human rights lawyer and expert who has spent his career working to establish and defend the rule of law.” A native of Senegal, “in 2012 he was appointed United Nations Special Adviser on the Prevention of Genocide…Mr. Dieng served as the Registrar of the International Criminal Tribunal for Rwanda from 2001-2012.”
(click to enlarge photos) 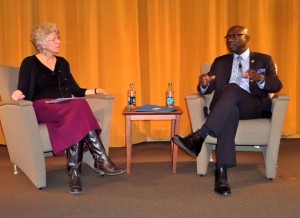 Adama Dieng in dialogue with Barbara Frey of the UofM Institute of Global Studies.

This month is the 20th anniversary of the horrors of the Rwanda Genocide in which, according to Mr. Dieng, “one million people were killed in the first 100 days”, and that was just the beginning of the tragedy. Introducing Mr. Dieng, Eric Schwartz, Dean of the Humphrey School of Public Affairs, reflected on his 25 years in public service positions, noting that more time needed to be devoted to “scanning the horizon”. As I interpreted his phrase, more of us need to have the vision to anticipate and mitigate problems before they happen; rather than be in a reactive mode as we so often seem to be.
Genocide is a prime example of recognizing a problem too late….
Mr. Dieng was most impressive, as one would expect a person of his credentials, and in his position, to be. His native language is French, a very common official in many African countries, and he would express his homey saying first in French, then translated into English. His English was impeccable.
As I sat there listening to this obviously brilliant and diplomatic representative of the United Nations and his native Africa, I mused about a question I’ve never heard asked: “what if the United Nations had not been created in 1945 or didn’t exist today? Where would we all be, now, in this increasingly complex planet?”
Ordinarily, if the UN comes up in conversation, it is the subject of general criticism, from being some sort of sinister world government scheme to at best being an ineffective representative on the world stage; a worthless collection of bureaucrats.
It is so often caricatured by use of bad examples of what it supposedly represents. This is not hard, because where the UN is found, there is often trouble which it did not create in the first place: Rwanda, for example, in 1994.
If there was no United Nations at all would we all be better off, or not?
Sitting there, just reflecting on bits and pieces I’ve seen and heard over the years, the United Nations has been a crucial instrument to help coordinate international efforts, and to act as a buffer, indeed, to act on occasion as a punching bag, in this ever more complex world. Let the UN pass away, and we would soon see what we were missing. Surely, it represents the imperfections of the world, but that is a main reason it exists.
It is an ever more essential entity in our ever-more global society of over 7 billion people.
People like Mr. Dieng deserve our thanks for their efforts to make this world a better place, one tiny bit at a time. 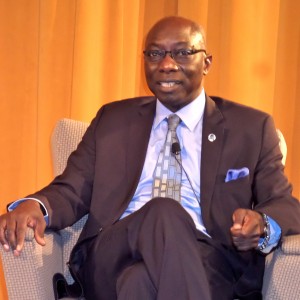 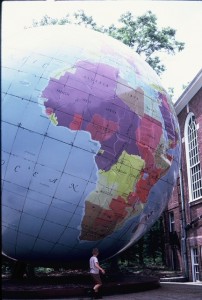 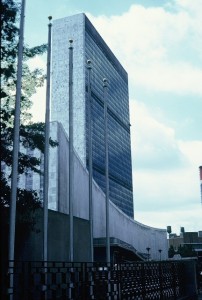