It is expected to be a beautiful Spring day in the Twin Cities today. Perfect Easter weather. Of course, not all Easter Sundays have been perfect. We dodged a lot of snow just a few days ago….
(click to enlarge) 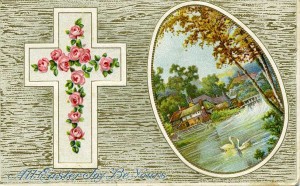 Postcard saved by my grandparents at their North Dakota farm dated April 4, 1915. 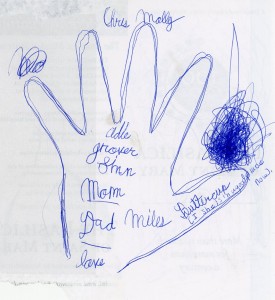 Best I know, the Catholic Church does more with Easter week than most any other Christian denomination. My sister, Mary, near the end of a U.S. Peace Corps assignment down in the South Seas in the island country of Vanuatu, described Easter there yesterday, in an Easter e-mail from New Zealand. You can find her description here, at the very end of this now very long post, dated April 19, 2014.
Good Friday I volunteered to usher at the at noon service at my church, Basilica of St. Mary, Minneapolis. We ran out of leaflets – they had printed 450. There were perhaps 500 in attendance, more than anticipated.
The Stations of the Cross are always a reflective time. The phrase that stuck most with me on Friday was this, from the Second Station, Judas’ betrayal of Jesus:
“They shared one another’s life for some three years.
They talked together, ate together, traveled together.
That night, he came to Jesus and kissed him one last time…
no kiss of love,
rather, a kiss of rejection and betrayal.
To feel rejected or to feel betrayed is a painful experience.
To be rejected or betrayed by a friend hurts even more.
Who among us has never felt rejected or betrayed?
Or who among us has never rejected or betrayed someone?
Betrayal is an ugly thing.
Rejection tears at the very fabric of our self-esteem….”
You can read that reflection, and all the rest, here: Basilica of St. Mary 2014 Stations of the Cross Presider Book
As years accumulate, stuff happens…for us all. Hurt, and all the rest, is not only one way. Messes are part of everyone’s life.
After the Stations, I walked across Loring Park to have a cup of coffee with a good friend of mine. She’s Catholic, too. Earlier in the morning she’d had breakfast with a couple of Catholic friends, folks I know, who are disgusted with the Church, one because of the continuing unresolved scandal of sex abuse by some Priests (his was a painful personal experience some 50 years ago); the other because, apparently, there’s nothing in the church for her daughter, who’s becoming Episcopalian.
Earlier that morning I’d written a note to a friend who’s being baptized Catholic Saturday night but had almost dropped out due to the latest scandal news last Fall. We had long conversation at her time of crisis last Fall, and after that and many other conversations with other people, she chose to carry on with her desire to become Catholic.
My general advice to her, as I recall: do as you will; we’re a huge church, and the church is all of the people in it, not just some leader or bad apple.
Before I wrote to her, I’d written to the Priest who’s again in the headlines out here. I had and have great respect for Fr. Kevin – he was my pastor in the 1990s, and Diocese Vicar General as well – the point person on the then-abuse cases. A wonderful man.
Earlier this week he’d spent an entire day in depositions because of alleged mishandling of complaints somewhere back when.
I used to have a job similar to his, representing people in trouble, and answering to a boss, so I understand the dilemmas he must have faced when the scandals erupted years ago.
So it goes.
I have no problem admitting I’m life-long and still active Catholic. “Catholic” is, as already described, a very complex term. As usher, I see all sorts of “Catholics” entering the doors, and I will again at the 9:30 Easter Mass this morning.
It is the people who are the Church, and Catholics are a diverse lot, defying a standard description, from least to most exalted…. The U.S. is a diverse lot, too. Even families, as most of us know from personal experience.
*
A short while ago, on March 27, was when Pope Francis met President Obama in Rome. I was in LaMoure ND on that day, when the new Bishop of Fargo, John Fulda, came by. He was there for a meeting with area Priests, and the afternoon Mass was crowded.
Here’s two photos from March 27: 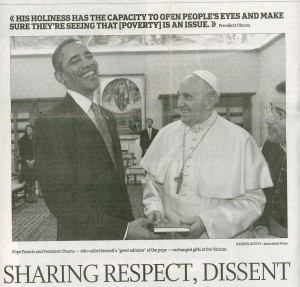 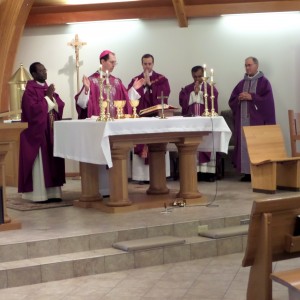 If any two people know about differences of opinion and how they need to be respected, it is Pope Francis and President Obama. They represent immense constituencies where differences of opinion abound. I highly respect them both, and I think their common thread is their efforts to set a higher bar for a more positive tone of dialogue and understanding between and among people.
At their level, disagreement is assumed. Their job is to try to set the tone, and they both work on a positive tone.
Our society, of course, seems to place the emphasis on disagreement, “dissent”. When in doubt, go to war, with each other, or against some other. The fact of the matter is that these two international leaders, one representing people generally, and one representing a religious belief, understand another way of communicating: the importance of dialogue, of relationship.
I suspect the same has to be true of Bishop Folda, a youthful, new Catholic Bishop living in a world as he does where not even all Catholics agree with him, much less the rest of the population.
*
Which leads back to the hand leading this post: I was cleaning up after Stations and found the scrap of paper on the floor.
It was by a little kid, probably, doing some drawing of his or her family, including an apparently recently deceased pet, Buttercup. Somebody wrote in the names.
I like that illustration; no trash can for it! There seem to be seven people and one deceased animal in it, and behind the words are the real lives of these seven people, and all that surround them. Maybe, today, there’s an Easter Egg hunt at their house, or neighborhood. Perhaps candy. Hopefully something with family, a pleasant day (as we know, such days are not always pleasant for everyone.) Tomorrow is the future, and whatever it holds for all of them.
Happy Easter. 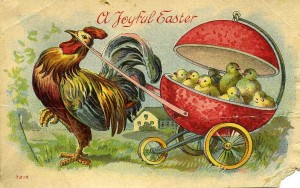 Another old Easter card from the ND farm, undated.

POSTNOTE: 9:30 Mass at Basilica was crammed with more people than I’ve ever seen there over the last 18 years of membership. The sanctuary was filled to overflowing by 9 a.m., and the supplementary overflow facility was also filled to standing room only. A far larger than normal crowd is always expected at Christmas and Easter. This crowd was considerably larger than usual.
Lee Piche, Auxiliary Bishop of the Archdiocese, was guest homilist (sermon) and had an excellent message which I interpreted as advice to better care for not only each other but for our earth. I was impressed.
Everyone, of course, has their own story about why they attended today.
To me, the only story is that a lot of people showed up….
https://thoughtstowardsabetterworld.org/wp-content/uploads/2022/04/thoughts-300x138-1.jpg 0 0 dickbernard https://thoughtstowardsabetterworld.org/wp-content/uploads/2022/04/thoughts-300x138-1.jpg dickbernard2014-04-20 03:54:162014-04-20 03:54:16#873 – Dick Bernard: Easter, a Beautiful, Reflective, Complicated, Controversial Time