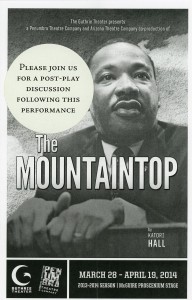 Sometimes seemingly unrelated events just fit together, like random pieces of a puzzle that together make a confusing mess make sense.
For me, such a convergence happened on Friday in three bits; preceded by two larger and more publicized national events.
I just happened to be at an intersection where they came together, connected, at least to me.
The events:
Friday morning, first, a briefing about education legislation at the State Capitol by the Executive Director of the outstanding parent public school advocacy group, Parents United.
Two hours later the appointment with the Tax Man, to square accounts with the IRS and the State of Minnesota for 2013.
Seven hours later, attending a powerful play about Martin Luther King’s last evening alive, “The Mountaintop”.
A day or so before came the resignation of Jean Sibelius of the Department of Health and Human Services. This was a hate feast for some; a celebration of the alleged failure of the Affordable Care Act (ACA), when the actual results have been very much the contrary: millions more Americans now have health insurance despite desperate attempts to kill the beast labelled “Obamacare”.
(Of course, in these kinds of things, facts really don’t matter. I heard report of a recent survey done on the street: when asked to compare ACA and Obamacare, ACA was the winner – even though both are the exact same thing….)
And about the same time, the recognition of the 1964 Civil Rights Act, passed 50 years ago this year.
All these events fit together, at least in my seeing them converge on me.
The tax man told me that State and National government wanted about 20% of our taxable income (which differs, of course, from actual “income”).
Minnesota is a relatively high tax state: about a third of that 20% went to Minnesota; the other two-thirds to the United States of America.
That tax doesn’t seem excessive to me. Before the tax appointment, the early morning event talked about the state of legislation for Minnesota’s children in public schools – about one of every six persons in our state of well over 5 million.
Those kids range from those tiny few who recently got perfect scores on the ACT, to the 13 year old in our town who is in jail today for violence against someone in her family and hasn’t been in public school but a few weeks all this school year and whose self-made future is very much in doubt, out of control.
Triumph or Tragedy: all of those kids are our future, regardless of their ability or disability or where they happen to live. And this goes for most every other service to which we allocate tax dollars.
Certainly there are inefficiencies – show me the system, including the most outwardly perfect nuclear family, that is completely efficient…I doubt, frankly that such a family exists.
Government of, by and for the people makes for a civilized society; the opposite is anarchy, hardly a recommended route.
Which brings me to “The Mountaintop”, which has been to four cities now, and if it comes to yours, do see it. It’s at the Guthrie Theatre through April 19.
The 90 minute play explores what might have transpired on the evening of King’s last day alive, April 3, 1968, in a motel room in Memphis, between King and a hotel Maid.
Of course, no one knows what might have happened had MLK himself lived on – he would now be 84, by my arithmetic.
The fact is that he didn’t live on, except through all of us who learned from his message and need to carry it forward.
These are not especially good days for the Civil Rights ideals expressed back in 1964 and before.
But there is a base built, and with some conscious effort by those of us who care, there will never be a return to the terrible old days, even given the immense gulf now existing between rich and poor – far worse than then.
But it is each of us who need to be on that “Mountaintop” MLK left, April 4, 1968.