It was thirteen years ago today, January 18, 2000, that my staff colleagues at Education Minnesota bid me adieu at my retirement after 27 years attempting to do my best to represent teachers in a collective bargaining state.
I was not yet 60 when I cleaned out my office, handed in my keys and walked out the north door at 41 Sherburne in St. Paul.
It had been long enough.
Even so, I had purposely fixed my retirement date to accommodate the statutory deadline for contract settlements that year: January 18, 2000.
My job back then was an endless series of negotiations about anything and everything: elementary teachers had differing priorities than secondary; that teacher who’d filed a grievance, or was being disciplined for something, had a difference of opinion with someone. Somebody higher up the food chain had a differing notion of “top priority” than I did….
So it went.
And negotiations was a lot better than the alternative where the game was for one person to win, against someone else who lost.
It was one of many lessons early in my staff career: if you play the game of win and lose, the winner never really wins, at least in the real sense of that term, where a worthy objective is for everybody to feel some sense of winning something. Win/Lose is really Lose/Lose…everybody loses.
We are in the midst of a long-running terrible Civil War where winning is everything; where to negotiate is to lose.
We’re seeing the sad results in our states, and in our nation’s capital, and in our interpersonal communication (or lack of same) about important issues, like the current Gun Issue, Etc.
Thirteen years is a while ago.
I brought my camera along that January 18, 2000, and someone took a few snapshots (at end of this post). Nothing fancy, but it is surprising how many memories come back:
There’s that photo of myself with the co-Presidents of Education Minnesota, Judy Schaubach and Sandra Peterson. Two years earlier rival unions, Minnesota Education Association and Minnesota Federation of Teachers, had merged after many years of conflict.
I like to feel that I played more than a tiny part in that important rapprochement, beginning in the late 1980s in northern Minnesota.
Both officers have retired. Sandra Peterson served 8 years in the Minnesota State Legislature.
Leaders don’t stop leading when they retire.
February 28, in Apple Valley, Education Minnesota’s Dakota County United Educators (Apple Valley/Rosemount) will celebrate 20 years from the beginning of serious negotiations to merge two rival local unions.
I was there, part of that. And proud of it.
There’s my boss, Larry Wicks, who many years earlier I’d practiced-teaching-on at Valley City State Teachers College. I apparently didn’t destroy him then; he’s currently Executive Director of the Ohio Education Association.
And my work colleague and friend Bob Tonra, now many years deceased, who somehow took a fancy to my Uncle’s WWII ships, the battleship USS Arizona and destroyer USS Woodworth and painstakingly made to scale models, behind me as I type this blog.
And of course, colleagues – people in the next office, across the hall, other departments, etc. Or Karen at the Good Earth in Roseville – “my” restaurant for nearly its entire existence. They gave me a free carrot cake that day….
That January 18 I finally cleared the final mess from my office and took a few photos of my work space, across the street from the State Capitol building. On my office door hung a photo from the Rocky Mountain News in Denver, April, 1999, a few days after the massacre at Columbine.
That young lady in the picture is granddaughter Lindsay, then 13. She, her parents and I walked up that Cross Hill on a rainy April day, and saw the stumps of the two crosses one Dad had cut down – the ones erected by someone else to the two killers, who had killed themselves. They lived then, and now, scarce a mile from the high school….
All the memories.
Let’s all learn to truly negotiate and to compromise on even our most cherished beliefs.
Such a talent is our future. Indeed our world’s only chance for a future.
(click to enlarge) 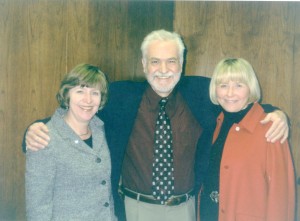 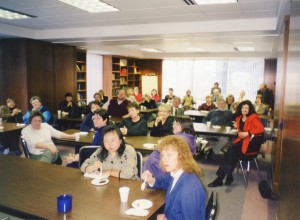 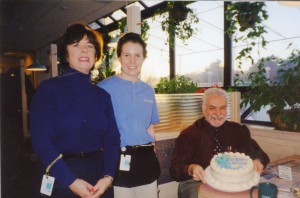 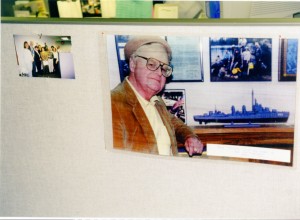 Bob Tonra with his model of the USS Arizona ca 1996 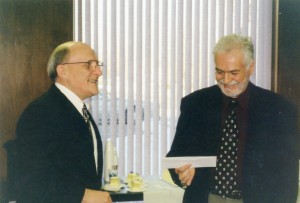 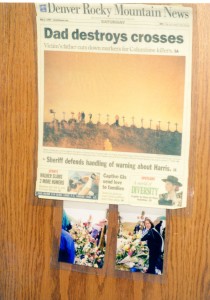 #763 – Dick Bernard: Congratulations, Tom and Jennifer, at your 25th Anniversary. "For everything, there is a season."
Shack II – Good Friday at the Basilica of Saint Mary. “God” Among Us.
#611 – Dick Bernard: A couple of Union Reunions
Beginning a New School Year…and a “Sha Na Na”….
0 replies